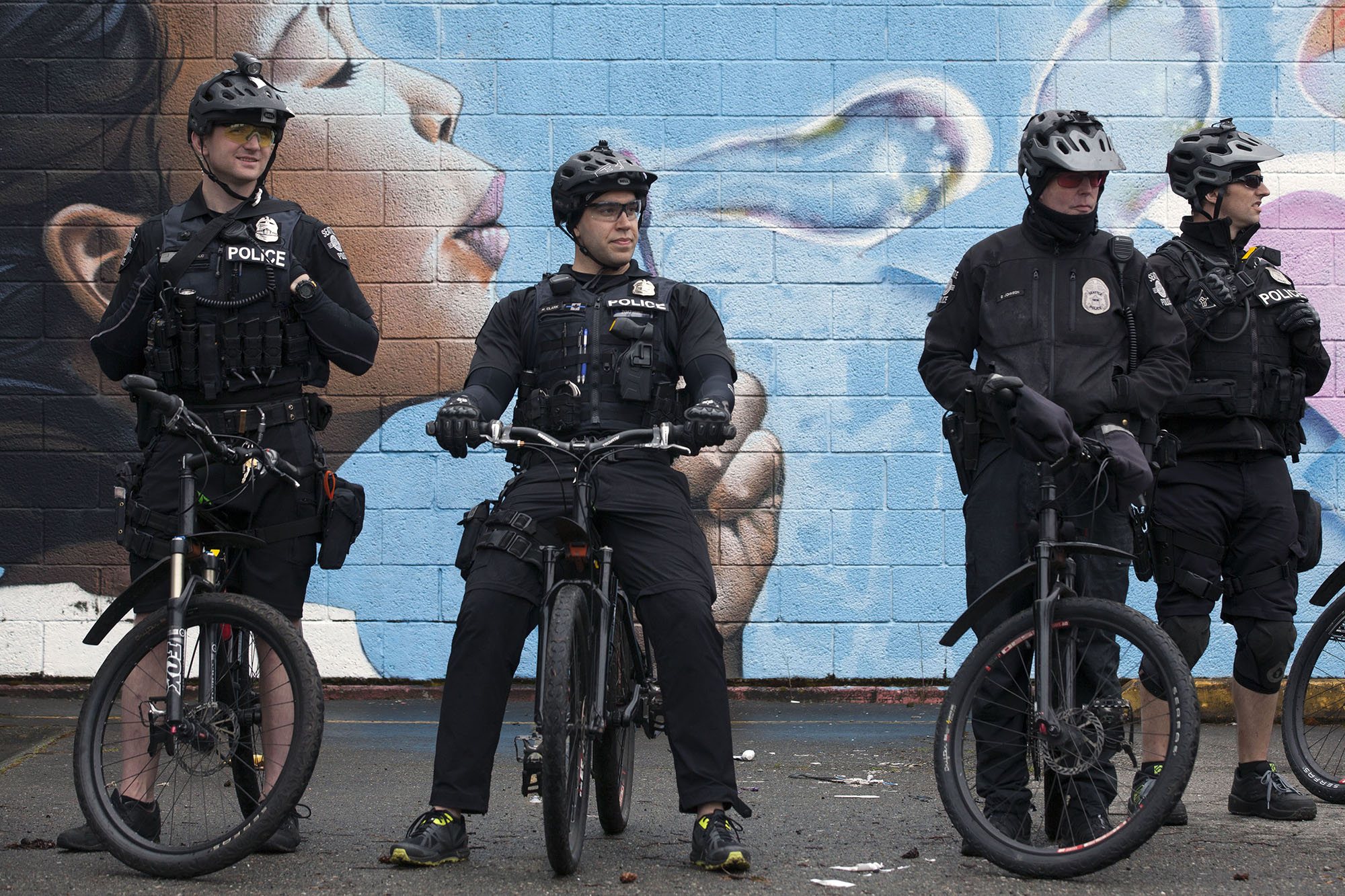 Seattle was on the cusp of finally ending federal oversight of its police department when an outside arbitrator demanded that the city rehire an officer who had punched a handcuffed woman in the eye.

The arbitrator's ruling was so upsetting to a federal judge that he saw fit to play the video of the incident — in which officer Adley Shepherd is seen leveling the woman in the back of his patrol car — to a captive audience in his usually staid courtroom.

When the tape finished playing, the judge, James Robart, concluded that the city police department would remain under federal supervision until it fixed what had gone wrong with the Shepherd case.

A year and a half later, Robart's orders have not been fulfilled. In fact, the city has not even presented a plan for how it will do so.

Under Mayor Jenny Durkan's watch, the city once defended its police accountability system, arguing that Shepherd's rehiring was an aberration. But now, with limited progress toward meeting the judge's wishes, Durkan is looking to the state Legislature to help solve the city's larger problems with policing.

Seattle is under pressure to overhaul policing after a summer of protests. But the city also sits on the precipice of a new round of police union contract negotiations, with federal oversight still looming in the background. Durkan is trying to meet a number of goals at once by pushing to reduce the power of outside arbitrators to overturn police discipline, as happened in the Shepherd case.

"I think the No. 1 thing that we need for the city of Seattle is to change the labor laws with regards to police discipline and how and when a chief can be overturned," she said in an interview.

If she were to get her way, arbitrators would be barred from conducting their own investigations and could overturn discipline only if the arbitrator found a chief's decision was arbitrary and capricious. Doing so would represent a significant curtailing of those arbitrators' power and lift a weight off the city's — and Durkan's — shoulders.

Police unions in Washington are sure to oppose the changes. Mike Solan, president of the Seattle Police Officers Guild, confirmed as much in a brief interview.

At the same time, even some of the state's most progressive legislators are skeptical there's a political path toward curtailing police officer labor protections. To curb arbitration for police means threading the needle between the demands of demonstrators and the fears of the larger labor world, which is fiercely protective of the right to arbitration.

"Arbitration, as it comes to workers' rights, is like a keystone in the movement," said Sen. Joe Nguyen, D-West Seattle, who supports curbing police arbitration but is doubtful it can gain enough support in Olympia. "Oftentimes, it was bosses who were negatively treating their workers, and the arbitration piece was really how they were protecting workers. So to give an inch on arbitration is painful because it's basically saying that things you fought for in the past may not have been perfect."

The Shepherd case received the most attention. But over the past 10 years, there has been a steady pattern of arbitrators reducing or overturning discipline of Seattle police officers — even when the arbitrator agreed with the findings.

Over the past 10 years, arbitrators agreed to reduce the discipline imposed by the Seattle police chief more often than not, according to an accounting provided to Crosscut by the Seattle City Attorney's Office.

It's a national pattern. According to a paper published in August from Stephen Rushin, a professor at Loyola University Chicago, discipline was reduced or overturned discipline 52% of the time.

"Year after year, and in communities all across the country, the use of arbitration for police disciplinary appeals has repeatedly resulted in overturning or lessening of discipline that was imposed because of serious misconduct, including excessive force," said retired Judge Anne Levinson, who served as an auditor of the police department's accountability office until 2016.

Currently, 84 Seattle police officers are awaiting a hearing with an arbitrator, according to department data. Among those is an officer who was fired for lying about working a second job and then lying about it again to an investigator. Another officer who is appealing was let go for firing his gun at a moving car.

As a part of what was hailed at the time as landmark police accountability legislation, the Seattle City Council tried in 2017 to mandate that all disciplinary appeals go through the city's Public Safety Civil Service Commission. But a 2018 contract with the city's largest police union — which was signed shortly after Durkan took office — reopened the option of using an arbitrator, to much protest by advocates who had worked on the accountability legislation.

When Shepherd was reinstated, it drew the Judge Robart's attention to that section of the contract. Durkan at the time defended the city's accountability system, but Robart nevertheless demanded it be fixed.

Now, in the wake of this summer’s protests, Durkan is no longer defending the accountability system. She is, however, arguing that the city is limited in how far it can go to fix it and calling on the state to act.

A similar change is being considered in the Oregon Legislature.

"There's great public expectation that we'd be able to get this type of accountability in Seattle," said Durkan. However, "we almost cannot ensure that we can with state law how it is. We have to have the change in state law if we want to hold police accountable in this fashion."

Rep. Debra Entenman, D-Kent, said she supports curbing arbitrators' authority. "I don't think that any institution should be able to negotiate bad behavior and be protected through arbitration for that bad behavior," she said. "I believe that all law enforcement should be held accountable when they have done things that are not within the standard of public safety and policing."

The police unions of Washington are likely to fight any significant changes to disciplinary arbitration. In a short interview, Solan of the Seattle Police Officers Guild called any proposed alterations an "overreach."

"Clearly police unions need to have arbitration rights," he said. "In terms of trying to change those from what is the current model, obviously we have a problem with that."

When it comes to arbitration and questions about what police unions can negotiate in their contracts, major changes also run headlong into a dizzying political landscape. There's the typical Republican and Democrat balance, but there's also unions’ reticence to touch collective bargaining.

"In the labor movement, they say that an injury to one is an injury to all," said Brenda Wiest, vice president of the executive board of  Teamsters 117, which includes some members of law enforcement in its ranks. "We think it's extraordinarily difficult to say certain rights are only OK to certain workers. We don't view that as an acceptable way to resolve these issues."

Sen. Nguyen — whom The Stranger once described as an Alexandria Ocasio-Cortez of Washington — said he supports curbing arbitration in theory, but said he doesn't believe there's a path to changing state arbitration laws, in large part because of labor hesitancy. He instead is planning to propose standardizing how arbitrators are chosen to cut down on possible gamesmanship by police to land the person most favorable to their case.

He acknowledged it's a smaller step. "I don't like to compromise on these things," he said, "but also when the issue is so important, if the alternative is nothing, obviously we'll come to the table."

The relationship between police unions and the world of labor has always contained certain tensions; the former is historically far more right-leaning than the latter.

But that occasionally awkward relationship has come under more intense scrutiny after this summer's protests. Some labor advocates have called on the national AFL-CIO to sever its relationship with police unions. In King County, the labor council did just that, voting earlier this year to expel the Seattle Police Officers Guild.

Durkan pointed to that vote as evidence of how curbing arbitration for police discipline is possible without alienating labor.

But even in King County, it's unclear how much support exists for rolling back arbitration. A resolution that the Seattle City Council passed last June advocated stronger police accountability measures in the city, but with the caveat that they do not include "the wholesale removal of binding arbitration for disciplinary cases."

Nicole Grant, executive secretary-treasurer of the labor council, said it's true there was not explicit support for changes to arbitration, but the conversation also had not been ruled out.

"I think that the purpose of unions, fundamentally, is to protect the vulnerable, and that's why there's something that is particularly disturbing about seeing workers rights or unionism invoked in a conversation about letting people get away with racist killings," said Grant.

It's shaping up to be a busy season in Olympia on police reform. The process through which officers are certified — and decertified — could be amended. The state could also move toward banning chokeholds and formalizing investigations into deadly uses of force.

For Seattle, though, no change would be more significant than how arbitration is conducted. Not only would it provide a clearer path to satisfying Robart, but it would reshape the dynamics at the bargaining table with the union.

“I don't think we'd ever get it at the bargaining table,” said Durkan. “And if people are serious about wanting that, then we have to get the change in Olympia."