Andre Taylor, the controversial activist for police reform, said he’s taking a hiatus after the coronavirus took him “close to death.” 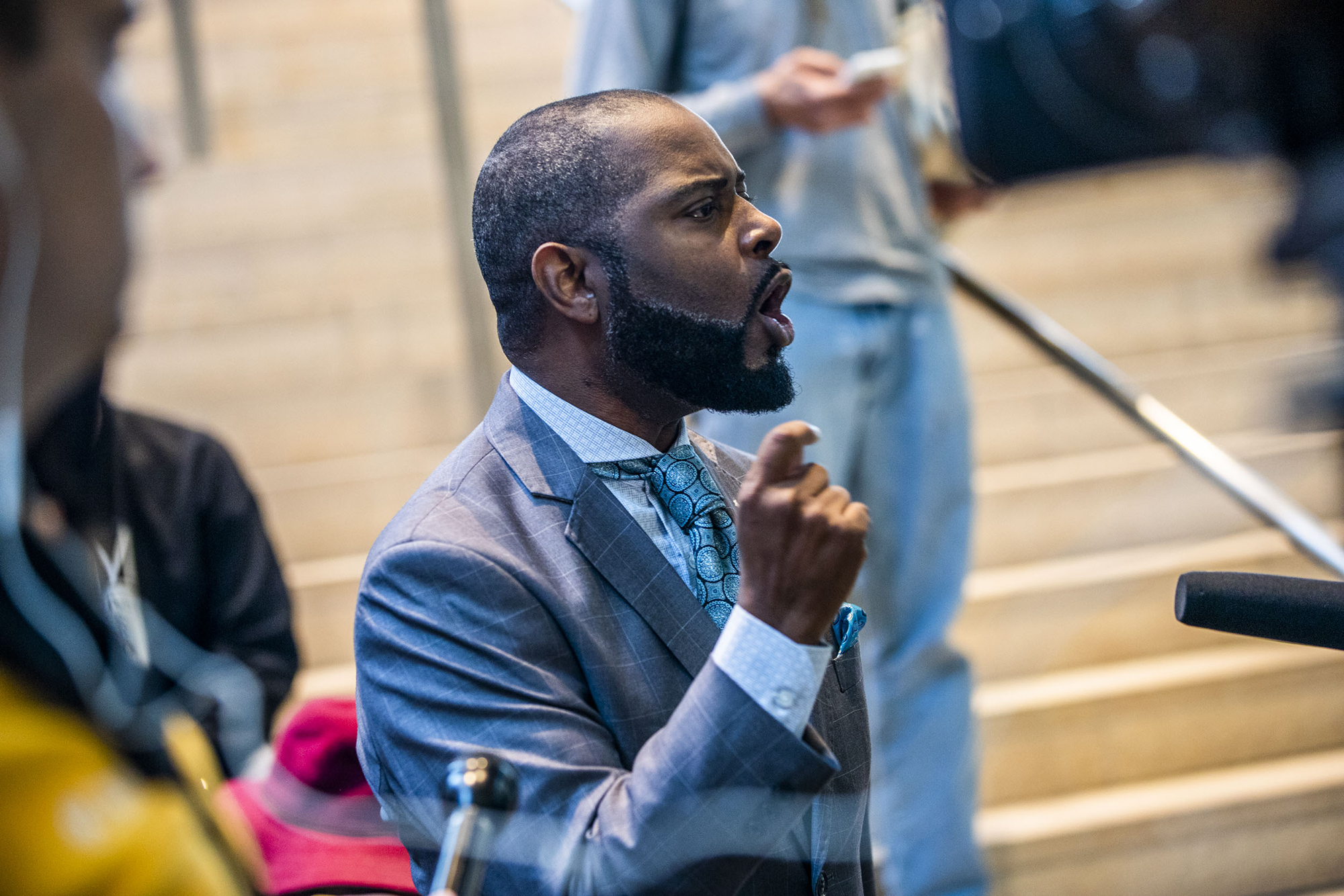 Andre Taylor, executive director of Not This Time, speaks to members of the media during a press conference at Seattle City Hall on Nov. 13, 2018. (Dorothy Edwards/Crosscut)

Andre Taylor, Seattle’s “street czar” who helped pass a statewide police reform initiative in 2018, says he’s taking a hiatus from his activism after a nearly monthlong battle with COVID-19 left him feeling “close to death.”

Taylor is recovering now, but only after weeks of his body “feeling in ways it’s never felt before.”

“I was so sure that I was never going to be normal again,” he said in an interview. “I couldn’t understand how in every area of my body it was resigned to be still and to lay there. It was real and it was scary.”

In order to focus on his own health, Taylor said much of his public-facing work will be turned over to others, including possibly his sister, Devitta Briscoe, herself a known presence in local criminal justice reform.

Since his brother, Che, was shot and killed by Seattle police in 2016, Taylor has become one of Seattle’s most recognized and divisive figures — both admired and scorned, sometimes for the same reasons.

Shortly after the death of his brother in North Seattle, he co-founded Not This Time, which aimed to bring together families who have had members killed by police officers. The group was also a major organizer behind Initiative 940, which rolled back the state’s restrictive language involving the prosecution of police officers. It mandated additional training and independent investigations of deadly force — a legislative victory on an issue that had previously failed to garner much momentum.

Taylor also became a familiar face at protests and at scenes where police had used deadly force, including with a bullhorn at Magnuson Park shortly after Charleena Lyles was shot and killed in 2017. The organization quickly folded new family members into Not This Time, often hosting press conferences on their behalf — including for Lyles, Iosia Faletogo, Eugene Nelson and others killed by police officers.

Taylor used to work as a pimp and spent time in prison as a result. He’s never hidden that history, instead pointing to it as proof of his comeback story and how a person can change. But it also turned him off to some fellow advocates and made him a prime target for conservative media.

At the same time, his once central role in protests came under increased scrutiny in recent months. He opposed the multiblock Capitol Hill Organized Protest area that sprung up in the wake of standoffs between demonstrators and police, urging protesters to move along.

His willingness — and even enthusiasm — to work directly with police and establishment figures added to the skepticism from the summer’s activist movement. For years now, he’s actively courted the favor of figures like Sen. Patty Murray, Rep. Adam Smith, Mayor Jenny Durkan and other mainstream politicians. He’s also boasted of his working relationship with past police chiefs, including Kathleen O’Toole and Carmen Best. At the peak of the protests’ tension, he stood shoulder to shoulder with many of those figures to urge calm.

Those relationships, he has argued, lead to real action. “That’s the most important thing because everything runs through relationships,” he said.

But those same relationships have also laid bare the complicated dynamics inherent in the leaderless movement last summer and questions of who really speaks for the “community.”

In recent months, the city's Department of Neighborhoods under the Durkan administration penned a contract with Not This Time to de-escalate tensions in Seattle, particularly around Capitol Hill. For over $12,000 a month, the organization — and Taylor specifically — would act as the city’s “street czar.” That, too, attracted scorn from both the left and the right, as one side questioned the city’s working with a former pimp and the other viewed it as a backdoor attempt of sorts by the Durkan administration to curry favor with protesters.

In an email, spokesperson for the Department of Neighborhoods, Sam Read, said the department has not received an invoice for the "street czar" work since October 9 nor communicated with Taylor for "several weeks as we understand he was taking some personal time." The contract will be reevaluated at the end of this year, Read said.

For his part, Taylor has always pointed to the results of his work, including around I-940, as a rebuttal to his critics. “I would hope that people would be smart enough to look at the work, because that’s all you have at the end of the day,” he said.

Now Taylor says he’s going to step away from that work, at least for a time, for the sake of his own health. His sister and others in Not This Time’s orbit could handle much of the work, he said.

Taylor first started feeling unwell about a month ago. He noticed one day that he was unstable on his feet and feeling lightheaded. From there, the illness began to intensify to the point where he could no longer walk.

He became couch-bound as his health continued to deteriorate. His wife, who also tested positive for COVID but who experienced only mild symptoms, would dab him clean and bring him water.

Taylor also receives kidney dialysis, which he worried made him particularly vulnerable to the virus.

He never experienced any shortness of breath, which allowed him to avoid the hospital. It also means his illness was technically “mild,” but, Taylor said, that undersells how poorly he felt.

“People have said this often, but I don’t wish it on my worst adversary,” he said of the illness. “If mine was mild, I can understand how people can easily die. Easily.”

Taylor said he doesn’t plan to disappear completely and has visions of expanding Not This Time to California. But he’s going to step back for a time, at least as long as he still feels vulnerable.

“All of this work is no good if you’re not living anymore,” he said.