Following a summer of protests, voters approve charter amendments that could lead to a new reality for policing. 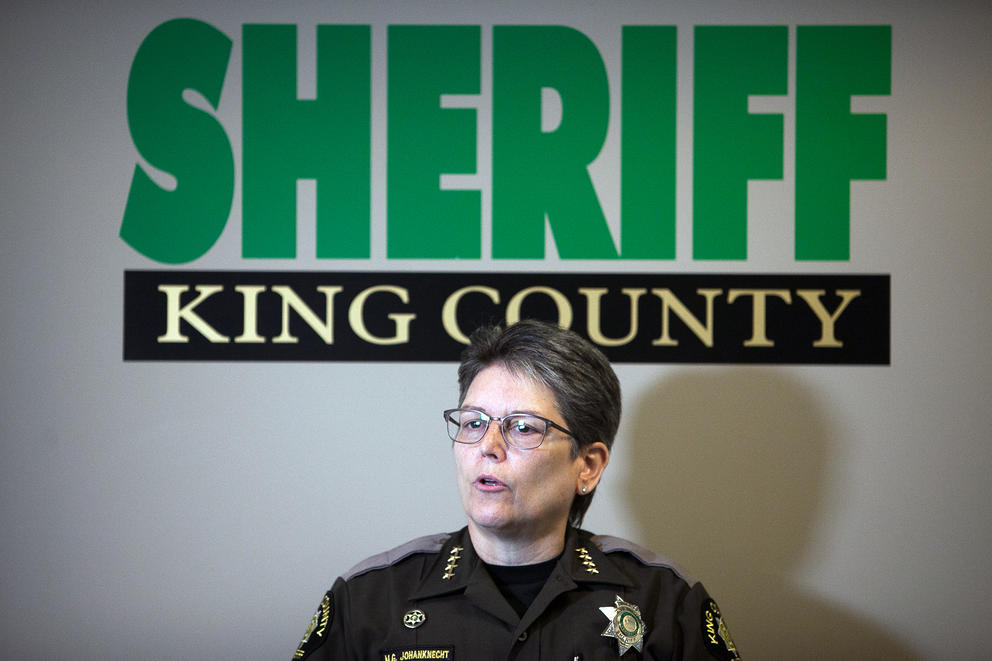 King County Sheriff Mitzi Johanknecht was always going to need to fight for her job next year. But, before Tuesday, she thought she’d be making the case to the voters who hired her in the first place. Now, those voters have said they don’t want that responsibility, opting instead to turn the task of choosing a sheriff over to King County’s elected representatives.

Voters appear to have passed two significant changes to the county’s charter related to policing. In addition to making the sheriff an appointed position, the voters have also granted the King County Council more authority in deciding the exact roles and responsibilities of the sheriff’s office.

Members of the county council have promised to allow Johanknecht to serve out her term, which ends next year. But after that, it’s unclear what her future may hold, as backers of the King County Charter amendment turn their attention toward recruiting for the job on a national scale and soliciting wide community input.

The changes to the county’s charter — which are currently passing by comfortable margins — represent some of the first legislative aftershocks from months of protest in Seattle. They will roll the clock back in King County to before 1996, when the sheriff became an elected position and the office’s duties were more strictly defined.

Now, the role of King County’s other elected officials — the council and the executive — will grow when it comes to policing. For some, that growth is a power grab by a government that’s moved further left in recent years. But others view it as a way to bring more accountability and creativity to county policing, which provides services across city lines and in unincorporated areas.

“I think what King County voters here said is we want a law enforcement system that reflects our values, and we think an important way to get there is to take down some of these barriers,” said King County Councilmember Rod Dembowski.

For opponents and supporters alike, the hunch before the first tallies were released Tuesday was that voters would opt to retain their authority in deciding who is sheriff, especially because the proposed amendment was buried in a long ballot beneath technical-sounding language.

But, perhaps because of the momentum behind police reform that’s built throughout the summer, both measures passed.

“I was particularly surprised at the appointed sheriff measure,” said King County Executive Dow Constantine, who supported the change, “because there had been quite a bit of campaigning against it and because historically people have been really fond of voting for as many positions and measures as possible.”

Both supporters and opponents of the measure largely shared what was at stake in making the sheriff an appointed — not elected — position: It would give more power to the King County Council and the executive over the sheriff’s office.

Whether or not this was a good thing, however, was where there was disagreement.

Johanknecht, a veteran of the sheriff’s office who unseated incumbent John Urquhart in 2017, declined an interview request because her “focus remains on public safety,” a spokesperson said. But Stan Seo, a captain in the sheriff’s office who led opposition to the charter amendments on the ballot, said he was concerned about the changes and did not rule out a future initiative to roll back the amendments on a state or local level.

“I’m confused as to why one would give up their opportunity to vote and make choices and hold people accountable and support candidates who are willing to run for office,” he said. “It’s unfortunate. I hope the county council does the right thing, but from my perspective, oftentimes that’s not the case and they don’t represent the voices of the people.”

King County will now be the only county in the state — and one of the few across the country — to appoint its sheriff. In doing so, it will more resemble a city police department than a county one.

That’s appropriate, say its supporters, because King County is now predominantly urban. The hope is that accountability can be meted out more often than once every four years, when there’s an election, and that elected officials can recruit from outside the region.

From a loftier perspective, there’s an aura about sheriffs that seems to hearken back to the Wild West days, when a badged man watched over the town; the roots of the word sheriff literally mean “guardian of the county.” That history continues today, with some right-wing sheriffs claiming ultimate constitutional authority.

That is not the case in King County, and none of the elected representatives say the ballot measures were a hit on Johanknecht personally. But, said Dembowski, because of how urban King County is, the sheriff's office ought to act more like a city police department.

“I think urban counties and progressive counties are just in a different place than our more rural counties,” he said.

He also pointed to the rise of sheriffs like Joe Arpaio in Arizona or David Clarke in Wisconsin as examples of the deified status of the position that he said is a “relic” of the past. “There’s sadly something in the sheriffs where you have these sheriffs saying they are the law of the land,” he said. “That’s just not where King County is.”

The county now faces the task of transitioning to a more process-driven approach to law enforcement and choosing who will lead that charge. Whereas before, the sheriff would take the mandate given to her by voters to direct the department, county officials say they intend to open that up more to people most impacted by policing, whose voices may often go unheard.

Of particular focus raised by both Dembowksi and Constantine will be finding areas where police perhaps don’t need to respond. In some ways, that’s been the low-hanging fruit for elected officials responding to the summer’s uprising — designating someone other than armed officers to help people in a behavioral health crisis.

“I’m eager for us to engage in all the work that we have teed up to really respond to the call from all of our constituents to a more holistic approach to community safety and behavioral health challenges,” said Constantine.

As far as choosing the next sheriff, Constantine said he believed that process would begin in earnest sometime next year.

As he’s done in the past, Seo argued that policing was about to become more politicized and that the changes are a backdoor to defunding. “My fear is the council will enact amendments or laws or ordinances that will serve political agendas,” he said. “Law enforcement is supposed to be neutral.”

That fear is rooted, in part, in some of the budget conversations happening in Seattle City Hall, across the street from the King County Administration Building. But Dembowski sought to draw a distinction between the two local governments.

“King County voters gave us an endorsement to keep going,” he said. “It’s different from Seattle. There’s just a lot more dysfunction there, and I’m proud of our steady hand on the tiller.”

It’s unclear if Johanknecht will apply for the position or whether the executive would nominate her. Seo declined to speculate or weigh in on whether he thought she should be considered.

Constantine said he expected his conversations with Johanknecht to go well. He reiterated that the changes were not a referendum on her, but rather to ensure that “both the executive and the council will get the best person possible.”