Under pressure from landlords, the state could ask tenants to prove their financial hardship is due to COVID-19. 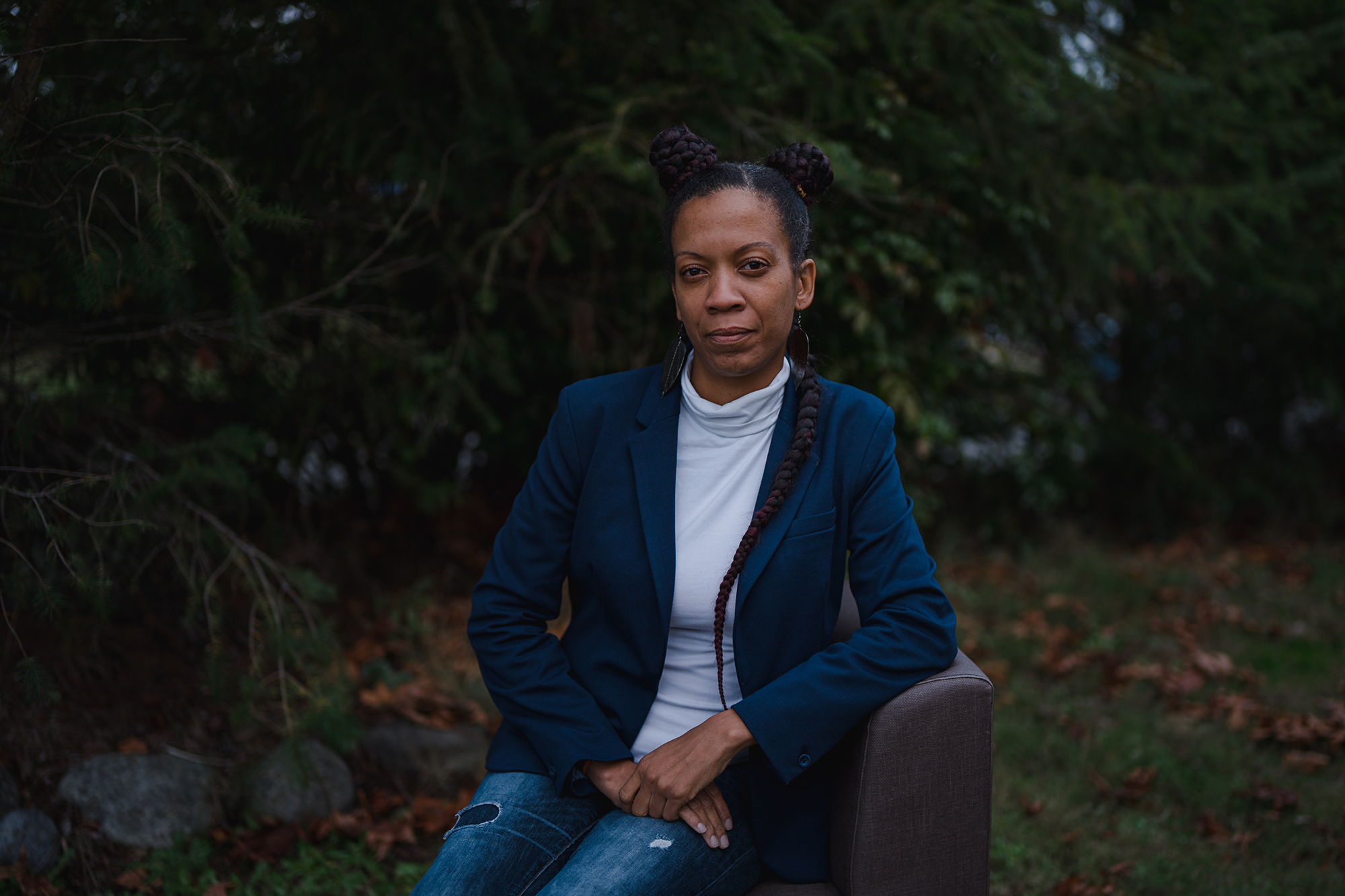 Shukura Wilford on Wednesday, Nov. 11, 2020, outside her home in Renton, Wash. Wilford, a single mother of three who works for Seattle Public Schools, is struggling to pay her rent. (Jovelle Tamayo for Crosscut)

Shukura Wilford hasn't lost her job, but that doesn't mean she isn't struggling to pay her rent. Were it not for the state's ban on evictions, Wilford, a single mother of three who works at Seattle Public Schools, wonders what else she'd have to give up to balance her books. Heat? Groceries? Car payments?

Now, more than eight months into the moratorium, Gov. Jay Inslee's office is considering scaling back the reach of that eviction ban. Without any new federal resources on the horizon and as landlords bend under the pandemic's weight, a work group of landlord and tenant representatives is mulling whether to narrow the eviction pause only to tenants who can show their finances have been hurt as a direct result of the COVID-19 pandemic.

It's a change that could address some landlords' anecdotes of "elective nonpayers" — those who the landlord believes can pay, but are choosing not to. The adjustment would also bring Washington's moratorium more in line with other West Coast states, as well as the federal one from the Centers for Disease Control and Prevention.

But with coronavirus cases spiking again and federal relief stalled in Washington, D.C., the proposed change in Washington state is getting pushback from tenant advocates and some legislators, who are  not convinced willful nonpayment is a widespread problem and doubt requiring proof of hardship could be administered easily or would solve the larger problem. They worry that eligible or vulnerable tenants like Wilford could slip through the net.

John Flanagan, a policy adviser to Inslee, acknowledged there is no easy answer. "No matter what, we are in a very difficult position in terms of how the current moratorium — or changes to the moratorium — pans out," he said.

Few argue that the eviction moratorium is a sustainable solution to the coronavirus's economic devastation. It has likely prevented thousands from losing their homes in the short-term, but leaves unanswered the question of what comes next. And with each month that passes, property owners have more bills they can’t pay and tenant debt grows.

The scope of the issue is enormous. At the end of October, more than 500,000 renters in Washington were using credit cards or short-term loans to meet their basic spending needs, according to the U.S. Census Bureau's Household Pulse survey — an increase of about 100,000 from the month before. More than 150,000 renters reported "no confidence" they could pay the following month's rent, an increase of about 30,000. In total, 63,000 tenants were occupying their homes without paying rent.

For landlords, the collective impact could be crippling as well, as contingency funds run dry after months of limping by. What may have once been a single month or two of late rent has, for some, turned into many more than that.

The solution is more renter relief funds, say people on both sides of the moratorium. But with Congress in a stalemate and Washington's Legislature not in session, money is in short supply. The state dedicated $100 million for aid over the summer, but Flanagan said the state likely needs that much every month to fully address the problem.

Without extra resources, the question is whether narrowing the moratorium will make enough of a difference that it's worth the risk to tenants.

Wilford is concerned about what would happen if she needed to prove that her financial hardships were COVID-related. At first glance, not much has changed for her. She still has the same full-time work she did before the virus arrived.

But a closer look reveals her bills are all higher. Her three children, stuck at home for remote schooling, are eating more. Their lights and heat are on all the time now. And she needs to drive her children around more, adding to her gas expenses.

"On the one side, I still have my full-time job," she said. "But on the other side, I’ve got to support my home, keep the lights on, keep the heat on, keep groceries in the house."

When Inslee first announced a ban on evictions last February, Washington and the country still believed the  pandemic would require a short-term economic shutdown. Unlike in other West Coast states, Washington's moratorium was written under the assumption that the downturn would be so vast that it was not worth attempting to draw distinctions between normal hardship and pandemic hardship.

But by early this past summer, any hope that the pain would subside quickly vanished. Amid fears that rolling back the moratorium would lead to a spike in homelessness, the governor extended the ban and paused rent increases, but with its first set of caveats: Landlords intending to sell or move into their rental properties could evict tenants.

Even that caveat, though, exposed the immediate consequences of walking back the moratorium during a deep recession and offered glimpses into how vulnerable some tenants are. Since the change, there have been 42 evictions in King County in which owners said they wanted to sell or move into their rental, according to a tally kept by the Housing Justice Project.

At the same time, the extension sent landlords clamoring to fully repeal or at least roll back more of the moratorium —  saying it would push many out of business. One group filed a lawsuit against Washington last summer seeking to roll back the moratorium.

Responding in part to that landlord pressure, Inslee announced last month that he would extend the moratorium until the end of the year, but also convene a work group to discuss whether the moratorium's scope could or should be narrowed. Flanagan of Inslee's office said the modest improvements to the economy, combined with the lack of resources, spurred the office into considering tying the eviction ban more directly to COVID-19.

The work group continues to meet and no final decisions have been made. How the state could neatly tie the moratorium to COVID hardship is still unclear. Reaching tenants and working them through the right paperwork present a major logistical challenge.

Flanagan said that if the moratorium is narrowed, it could be in a generalized way. "In our case, the proposal we put forward was about a very, very broad affidavit that would say, 'I have been materially affected in a way that would stop me from paying rent,' " he said.

For Barkis, it's a step in the right direction. "You start to weed out the bad actors in a situation and you help those that truly need help," he said.

But the proposal has raised eyebrows among progressive legislators and advocates. Beyond the logistical hurdle of contacting tenants and helping them file a declaration, the larger concern is around how many tenants might fall into evictions because their finances were only indirectly hurt by COVID-19. Undocumented tenants or non-English speakers could be particularly vulnerable.

"When you try to legislate around moralism or morality, it just becomes very difficult to try to control for unintended consequences," said state Rep. Nicole Macri, D-Seattle. "Who is deserving and who deserves to be evicted in a global pandemic? When you start to raise those questions, it just becomes far more difficult to come up with a policy."

There's also the question of how much the declaration would actually accomplish. State Sen. Patty Kuderer, D-Bellevue, said she can't rule out that there might be tenants choosing not to pay, but said no one has brought her any hard evidence.

Still, landlords say they're getting desperate.

Landon Glenn rents 47 homes in Yakima. He said tenants in about 30 of those homes are either behind on rent or not paying at all, leaving him $90,000 in the hole. He said he's been pulling money from his personal retirement account to get by, but is "50-50" on selling everything and getting out.

In his mind, the eviction moratorium is making it harder for him to problem solve with his tenants. Rather than engaging in face-to-face conversations to plan out what sort of assistance they might find, he said tenants are unwilling to work with him.

"If someone has an attitude of 'I don’t have to work with you, I can do whatever I want as far as paying rent or not paying rent,' that’s where things become more challenging, because they won’t even open the door," he said.

At the same time, he acknowledged that parsing through the reasons a tenant is not paying is thorny. "It’s so hard to know the depths of people’s finances and who physically can or can’t," he said.

Wilford, meanwhile, tries not to let her children see that she's struggling. She said she's a "prideful" person and, as a single mother, has always worked hard to support herself and her family. But the pandemic has created so much uncertainty and put up so many barriers that now she's doubting she was ever as stable as she believed in the first place.

The eviction moratorium has given her some breathing room, she said, but she knows it will end. Knowing that keeps her from sleeping at night or ever truly exhaling. If the worst happens, she believes they could ask family for help with somewhere to stay, but she tries to not let her mind go there.

"I’ve always been told as a Black woman: pull up your bootstraps, make it work, figure it out," she said. "I thought I’d figured it out, but I was five steps forward and now I'm 10 steps back."