State regulators say the current system leads to low-income people and people of color paying more, and is bad policy in a pandemic. 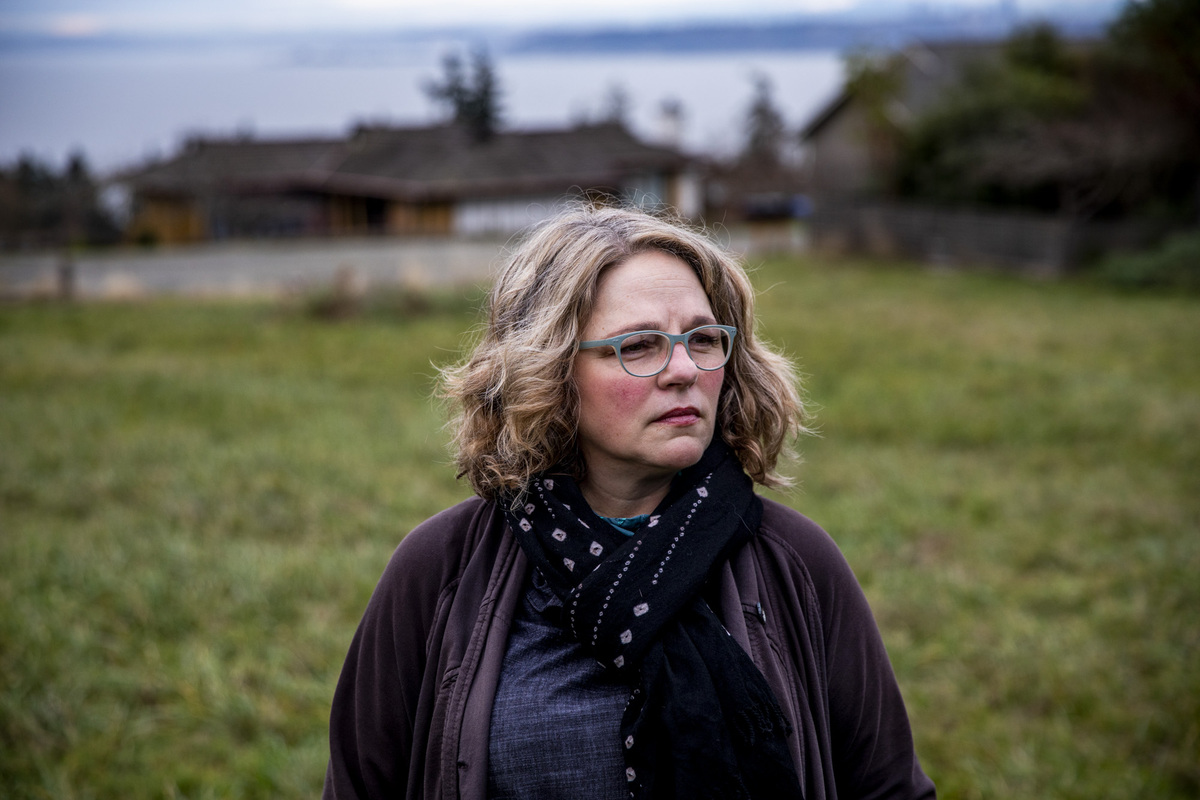 Cheryl Richmond near her home on Vashon Island on Dec. 7, 2020. Richmond saw her car insurance nearly double recently due to a drop in her credit score after missing two mortgage payments. She lost her job in February and, like most people, has been struggling to pay her bills during the pandemic. Washington Insurance Commissioner Mike Kreidler is proposing legislation that would cut the tie between credit scores and insurance rates, which would help ensure people like Richmond, who are struggling financially during the COVID-19 crisis, won’t owe more money on their insurance. (Dorothy Edwards/Crosscut)

Like many people, Cheryl Richmond has struggled to pay her bills during the COVID-19 pandemic. After losing her job in February, she missed two mortgage payments before she worked out a new financial arrangement with her bank.

Months later, Richmond was startled when she got a notice saying her car insurance bill was going to double. She went from paying  $425 for six months of coverage to more than $800.

That’s because, unbeknownst to Richmond, credit reports play a major role in determining what people pay for insurance, both in Washington and most other states around the country.

“This is really unfair,” said Richmond, a Vashon Island resident who says she has an unblemished driving record, but saw her credit score drop about 200 points this year. “People are hurting right now.”

Mike Kreidler, Washington state’s insurance commissioner, agrees. He said tying insurance to credit reports is a particularly damaging practice during a global economic crisis that has led to widespread unemployment.

Now, Kreidler is proposing legislation to cut the link between credit scores and insurance rates, so that people whose credit sinks during the pandemic don’t also end up owing more for insurance.

“Those credit scores for many people have gone in the tank — and we're gonna make sure that they have to pay more now?” said Kreidler, a Democrat who regulates the state’s insurance industry. “... Where’s the fairness in that?”

For Kreidler, it’s also an issue of equity. He said low-income people, who are disproportionately Black, Indigenous and people of color, tend to be hurt the most by the insurance industry’s reliance on credit scoring.

Also in 2007, a Federal Trade Commission report found that, when credit history was considered, Black and Hispanic customers were on average classified as riskier to insure. That determination would generally lead to those customers paying more for insurance.

Because of those factors, Kreidler sees the insurance industry’s use of credit reports as a prime example of institutional racism.

In a July letter, Kreidler highlighted several insurance companies’ public statements, issued at the height of this year's Black Lives Matter protests, about the need to address racism and societal inequities.

“Leaders — public and private — must now take action to honor the commitments many have expressed recently to end the structural inequities that have existed for too long in our society,” Kreidler wrote, while asking for the industry to support his bill.

Richmond’s insurance company, Allstate, did not respond to questions about Richmond’s rate increase, but wrote in an email that “race is not a factor in pricing, underwriting or claim settlements.”

In a letter last month, insurance industry groups told Kreidler’s office that they opposed a draft version of his bill.

The groups called their credit-based scoring system “an objective and accurate method” for assessing how risky someone is to insure. They wrote that the credit-based insurance scores used to determine rates “are tied to risk, and not to race or income.”

“Credit-based insurance scoring is a predictive tool for insurers — and a fair one for consumers,” according to the letter, which was signed by the American Property Casualty Insurance Association, the NW Insurance Council and the National Association of Mutual Insurance Companies.

By way of evidence, the companies cited the 2007 FTC study, which said credit-based insurance scores predicted fairly accurately how likely a customer was to file a claim.

As to whether the use of credit history reinforces systemic racism, Kenton Brine, the president of the NW Insurance Council, wrote in an email that "the allegation is powerful, but unproven.”

Yet others see little to no connection between a person’s credit report and how likely they are to get into an accident or file an insurance claim.

Linda Taylor, the vice president of housing and financial empowerment at the Urban League of Metropolitan Seattle, said credit scores don’t take into account many of the bills people pay reliably every month, such as rent and utilities, making credit history a poor gauge of personal responsibility.

Corey Orvold, a real estate agent who teaches a homebuyers class for the Tacoma Urban League, agreed. “I could have stellar credit and be a horrible driver, or be a horrible cook. There’s really no correlation," she said.

Because Black Americans in particular have been denied opportunities to build intergenerational wealth, including by being blocked from educational opportunities and homeownership, they are less likely to be able to ask a parent or family member for money during tough times, Orvold said. That can lead to more delinquencies that negatively affect their credit scores, she said.

Orvold said charging more for homeowners insurance based on credit history can make buying a home further out of reach for those with less than stellar credit.

“The home insurance payment is part of your mortgage payment,” Orvold said. “It is just another barrier where people may say, ‘My homeowners insurance is too much, I can’t afford this house.’ ”

Insurance companies, meanwhile, argue that considering credit history allows them to offer discounts to many customers who have good credit.

State-level reports from Arkansas and Vermont seem to back that up, finding that although some people paid more for insurance when credit reports were factored in, most customers paid less. Brine, with the NW Insurance Council, argued that banning the consideration of credit history will cause prices to go up for most people.

But those who want to end the practice say that hasn't been the experience in California, where voters passed a measure in 1988 to ban the use of credit history in determining auto insurance rates.

Meanwhile, cost increases can be substantial for those penalized because of their low credit scores.

A 2015 analysis by Consumer Reports found that, in Washington state, a driver with poor credit and a clean driving record would pay $690 a year more for auto insurance than someone with excellent credit and a conviction for driving under the influence.

State Sen. Mona Das, D-Kent, said that if people end up with higher bills to pay because of their credit score, it makes it even harder for them to get out of debt and improve their credit. “It’s sort of like a circular problem,” said Das, who plans to sponsor Kreidler’s legislation in the state Senate.

Das said she, too, sees eliminating credit scores from insurance rate-setting as a racial equity issue, as well as something the Legislature needs to address urgently because of the pandemic.

Richmond, the Vashon Island resident whose car insurance bill doubled, said she thinks there should have been a moratorium on insurance companies hiking people’s premiums during the COVID-19 crisis, similar to the statewide moratorium on evictions the state put in place earlier this year.

Since that didn’t happen, she said Kreidler’s bill is a good solution.

“I am not the only one suffering, and this was the worst possible year,” Richmond said. “It is obviously something that fell through the cracks.”

Kreidler said he thinks Washington should act swiftly and set an example for other states around the country.

“This is where society needs to step in,” Kreidler said. “If we take a hard position here, we’re setting a model for other states to step up to it, the way Washington hopefully will.”

Kreidler and Das plan to formally introduce their legislation sometime this month.