Nearly half of Seattle’s helmet citations go to homeless people

Seattle police rarely enforce the law that bikers must wear a helmet. When they do, it’s often against people struggling with homelessness. 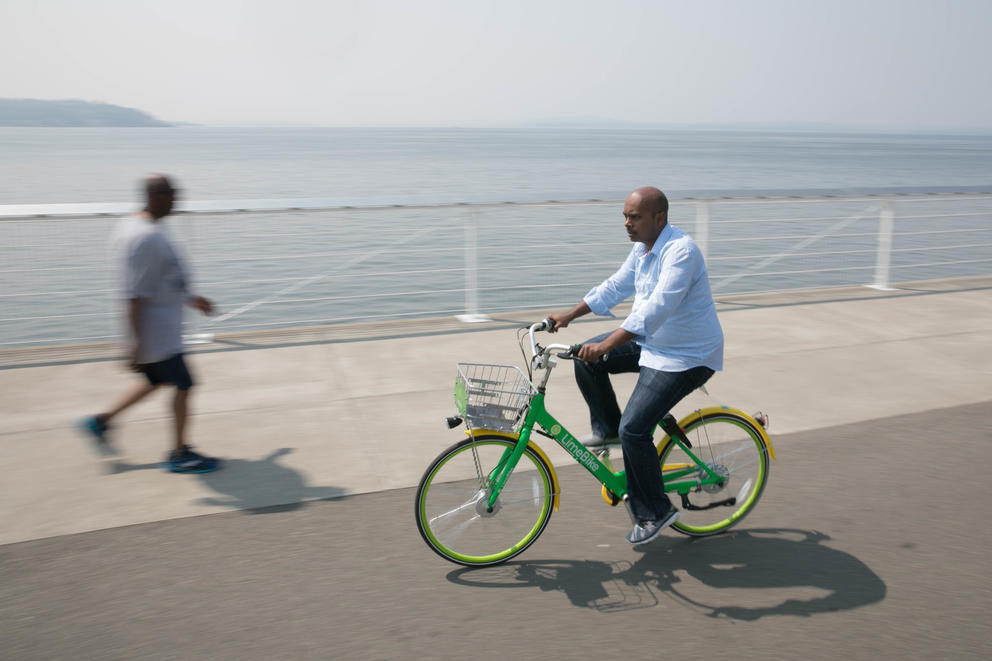 John was steering his bicycle into the Grocery Outlet parking lot in Seattle’s SoDo neighborhood when he was struck by a driver in a hit-and-run collision, fracturing his ribs, damaging his hip and neck and setting him on a recovery that continues close to two years later.

John, a pseudonym, is homeless and, in normal times, sells copies of the Real Change newspaper. His crash may have gone unnoticed but for the viral video of Seattle police officers cracking jokes about it as John still lay on the concrete. The kicker in the video — edited and released as a form of activism by Real Change — was when one officer opted to write John a citation because he was not wearing a helmet.

Seattle police have written a decreasing number of citations under the county’s all-ages helmet law, even as bikeshares like Lime and Jump arrived in recent years. However, of the citations the police have issued since 2017, at least 43% were given to people struggling with homelessness, according to an analysis of court records by Crosscut. Since 2019, that number was 60%. The total is almost certainly an undercount.

Crosscut came to that number by cross-referencing the names of those cited for not wearing a helmet with other public court records, police reports and media accounts. In public records, recipients of a citation often listed as their home address a homeless shelter or a service that provides mailboxes for people struggling with homelessness. In other cases, the person would be identified as homeless in police reports or in news stories. As a result, Crosscut’s count may exclude some people who are couch surfing, staying in their vehicles or who didn’t list an address.

In total, Seattle police have issued only 117 helmet citations since 2017, at least 50 of which were given to people who either currently or at some point struggled with homelessness. For advocates of both biking and people experiencing homelessness, the lax and disproportionate enforcement calls into question the utility of a law they view as not serving its intended purpose, to improve bicycling safety.

“When you have a law where lots of people are breaking the law, that gives the police a ton of discretion,” said Tom Fucoloro, editor of the Seattle Bike Blog, “It lets police pick and choose who they stop. Lots and lots of people who are white and well to do ride bikes without bike helmets, and they can never get stopped or almost never get stopped. Is the officer genuinely concerned about the safety of their head or is it for some other reason? I think it’s very likely it’s for some other reason.”

In an interview, John said police often stop him for not wearing a helmet, even if he’s not always cited. “They just got an attitude towards homeless people, you know?” he said. “Continually these officers, just so they could shake you down and humiliate you and put you through a whole lot of grief, they would stop you for not having a helmet on.”

The salt in the wound is that the street is littered with rental bikes and scooters, none of which come with helmets. “Those tourists are riding all over on the streets and everything else without [helmets] and you don't ever stop them. You don't stop and harass them,” John said.

Last summer’s protests served to amplify a growing skepticism of the criminal justice system’s reach, particularly when it comes to nonviolent or minor crime. The wide-scale rejection of the so-called war on drugs typifies the shift most dramatically, but local advocates and elected officials have come to scrutinize on all levels the interplay between law enforcement, race and poverty.

Citations — for drug use, traffic stops or bike laws — tend to reveal most clearly the disparities of the criminal justice system, if not their precise origin. In Seattle, for example, one in four jaywalking tickets issued between 2010 and 2016 went to a Black pedestrian, The Seattle Times reported. In Tampa Bay, Florida, an investigation by the Department of Justice confirmed that nearly three-quarters of bicycle stops were of Black people, who make up just a quarter of the city’s population.

These persistent disparities have spurred cities to question whether enforcement of these low-level offenses was causing more harm than good.

Tacoma recently repealed its mandatory helmet law, in part because of perceptions it was not being enforced equitably. Tacoma City Councilmember Kristina Walker said that, anecdotally, it seemed people of color were being stopped more often than white people. “It’s something that people of privilege don’t think about,” she said.

Washington has no statewide helmet law, leaving it up to cities to decide for themselves. In Seattle, the current rule — that everyone must wear a helmet while riding — is actually set by King County. The rule originally did not apply to Seattle, but was expanded to include the city in 2003.

While bike laws for children are commonplace, requiring adults to wear a helmet is the exception more than the rule across the country, Fucoloro said. Many bike advocates oppose the rule on the grounds that, while helmet use is a good thing, making it mandatory discourages people from riding and distracts from the steps cities should take to make bike infrastructure safer on a street level.

“I think certainly they are enacted with good intentions, with the assumption that they will save lives,” said Barb Chamberlain, director of active transportation with the Washington State Department of Transportation. But that is not necessarily the result, she said.

Even Dr. Fred Rivara, UW Medicine's chief of general pediatrics, who has become an outspoken advocate of wearing helmets, questions the law’s efficacy. “I still firmly believe in the importance of helmets,” he said. “Whether having a law enforced now would help to boost that, I don’t know. It’s an open question.”

Especially in the wake of the summer’s protests, people are also increasingly paying attention to social justice issues in the bike world, said Chamberlain. “There’s a large bucket that the bike helmet thing fits into, which is the way we’ve criminalized normal human behavior,” she said.

The helmet law, Chamberlain said, does not appear to be deployed with the purpose of keeping people safe on their bikes. “It feels like an excuse like stop-and-frisk,” she said. “You’re doing a thing that’s not a threat to any other human being and yet it’s an excuse to stop you, and then I can hope to find other things that I can bust you for.”

Nearly all of those who were cited for not wearing a helmet — homeless or otherwise — also had past criminal records. Most of the citations are still unpaid. Normally, that would send the recipient of the citation into collections, although Seattle Municipal Court has suspended penalties for defaulting since March and does not have a set date for when the system will return, according to spokesperson Gary Ireland.

In an email, Randall Huserik, spokesperson for the Seattle Police Department, said officers use stops and citations as a means to educate the recipient, sometimes through enforcement, on the benefits of wearing a helmet.

"The focus is the behavior, not the status," he said. "A risk of serious brain injury/death remains just as dire for someone experiencing homelessness as it does for someone who is housed — that is the risk these citations are intended to mitigate."

As to whether the stops are "pre-textual" — a means to stop someone in order to investigate an unrelated or more serious crime — Huserik said, "that is a nuanced, fact-specific, Fourth Amendment analysis for a court of law; to my knowledge, none of these stops or citations have been challenged on that ground, nor have any charges based on evidence discovered pursuant to a helmet-related stop been quashed on such grounds."

Bike laws still have their backers. In 2019, the National Transportation Safety Board recommended statewide helmet mandates, arguing that simply improving infrastructure would not go far enough. “A comprehensive national strategy to increase helmet use among riders of all ages is needed,” the report said, including “a helmet requirement for bicyclists of all ages.”

Growing up, John always respected authority, the result of having a military father. But that respect has come under strain in recent years, particularly as he has struggled with homelessness.

John doesn’t like getting into the details of his life too much, but about four years ago he lost his housing on Mercer Island, which had been paid for through Section 8 vouchers. Since then, he’s been living in his van in SoDo, selling newspapers before COVID-19 shut him down.

The collision came in March of 2019. He had pulled his bike into the center lane, on his way to the Grocery Outlet, when the car seemed to come out of nowhere. When he was hit, John said he slammed into the car’s windshield before being thrown to the street. The car then drove off, nearly running over John’s head. An officer from the state Department of Corrections saw the crash, confirming in the video that went viral that the car hit John before driving off.

In addition to discussing the crash itself, officers also focus on John, the video shows. One Seattle police officer suggests the Lime bike he was riding was stolen, which could be a felony, the officer said. The officer also notes John’s lack of helmet, saying, “I’ll write him for that.” Court records confirm the officer wrote the citation, which has not been paid.

Close to two years later, John said he’s still recovering from the crash. His body still hurts and he attends frequent therapy sessions. His neck is “messed up” and he had surgery on his knee.

In its advocacy, Real Change pointed to the incident as a proof that the police are “not reformable.” Organizer Tiffani McCoy said, “Moving toward more community-based outreach work is an absolute must. Completely removing the police force responding to these efforts is step one.”

For his part, however, John doesn’t favor defunding the police. Unlike many advocates, he said he likes and respects Mayor Jenny Durkan. He’s now staying in a shelter that was opened to decrease crowding during the pandemic and credits the mayor for that work.

“I think they're necessary,” he said of the police. “But I think some of that funding could go to other agencies that could maybe take care of us with a little more positivity than they do.”

Outgoing Seattle Mayor Durkan looks back with pride — and some regrets

As Durkan prepares to leave office, she says her term will ultimately be defined by the city's pandemic response.