Documents provided to Crosscut show a federal agency where officials do not follow their own policies. 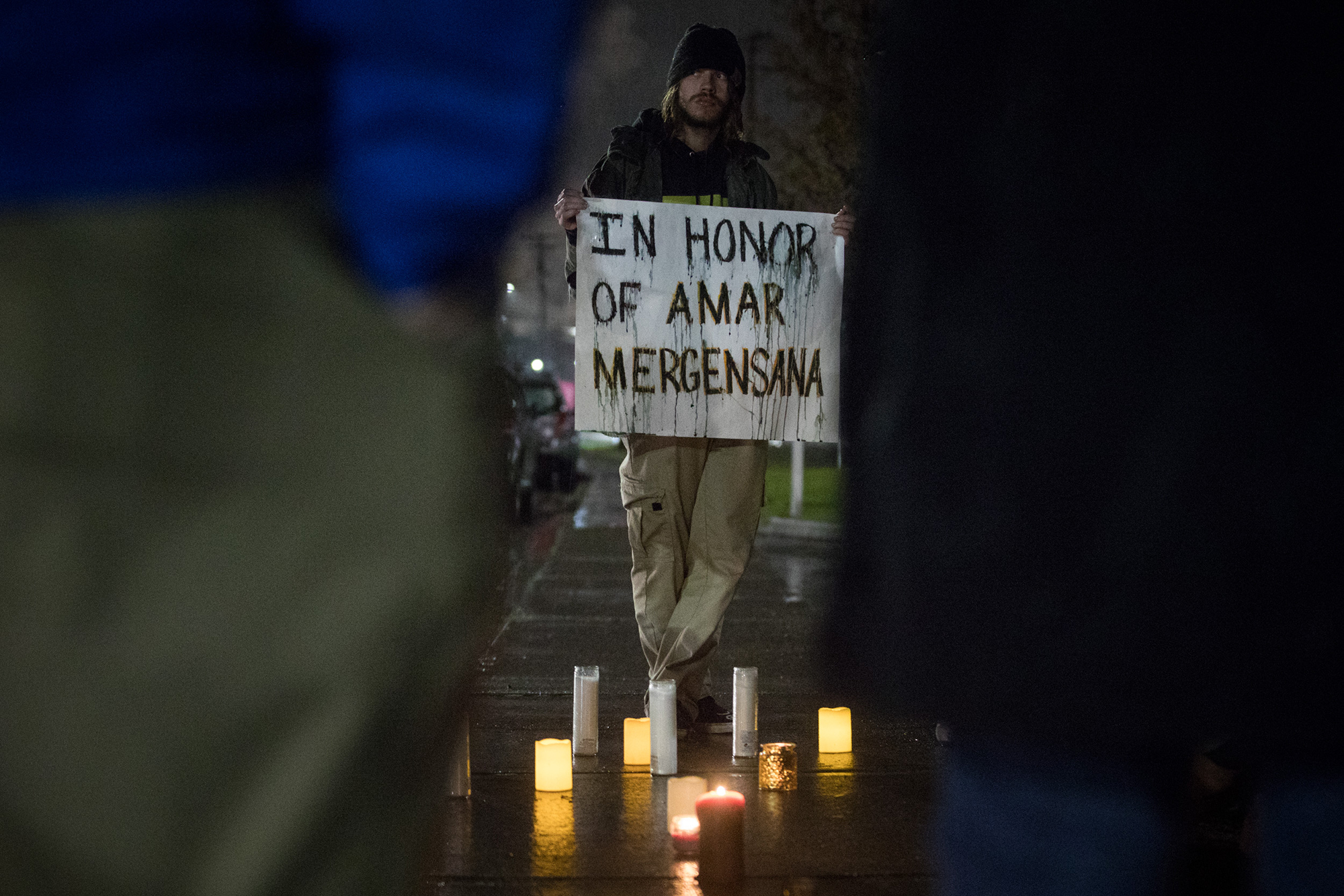 Crowd gathers during a vigil in honor of Mergensana Amar at Northwest Detention Center in Tacoma, Nov. 26, 2018. Amar died while in ICE custody after attempting suicide, months after an ongoing hunger strike. (Photo by Matt M. McKnight/Crosscut)

Documents recently obtained through the Freedom of Information Act paint a troubling picture of the U.S. Immigration and Customs Enforcement detention center in Tacoma, two years after a Russian asylum seeker died in ICE custody.

The documents provided to Crosscut by the nonprofit group American Oversight show a facility where officials do not follow their own policies and raise questions about how they protect the lives in their care.

The documents call into question a warden’s interference in the care of asylum seeker Mergensana Amar, who died by suicide in 2018. They show Amar, the second detainee to ever die at the facility, was restrained over the objections of hospital staff, even after he was declared dead. And they reveal ICE opted to not follow its own policies with regard to the prompt notification of officials and the media about any death that occurs in its custody.

This new information comes at a time when ICE is under fire for its care of detainees during the COVID-19 pandemic. Seven employees at the detention facility in Tacoma have tested positive for COVID-19, as have 21 detainees. A recent report from the University of Washington Center for Human Rights also showed the detention facility imposes solitary confinement, which Amar was in, on and off, for longer periods on average than any other ICE facility in the country. Hundreds of detainees from all over the world are held at the facility as their immigration cases proceed.

The UW center is also ready to release a report that will show Amar was far from the only detainee who attempted to kill himself at the detention facility. That upcoming report focuses on health and safety and was written after years of FOIA litigation. It will show that from Jan. 1, 2015, to Sept. 1, 2019, ICE personnel notified headquarters of 23 suicide attempts at the detention facility in Tacoma. 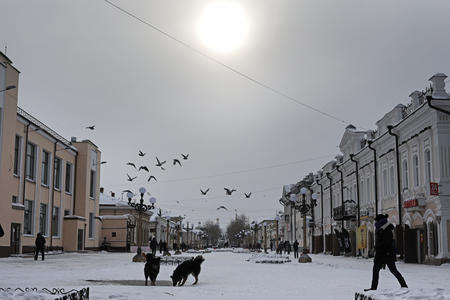 An asylum seeker vowed never to return to Russia. His death in ICE custody sent him back

Records and family members reveal new details about Mergensana Amar, the man who died in Tacoma while in ICE custody.

Amar’s story in the United States began in December 2017, when he turned himself in at San Ysidro, California, a border crossing between Tijuana, Mexico, and San Diego. Amar was transferred from California to the ICE facility in Tacoma. His application for asylum was based on what he said were discrimination and threats he faced in Russia as a Buryat from the Republic of Buryatia in Siberia. The application was denied, and he was promptly put into removal proceedings.

In protest of his impending deportation, Amar went on a hunger strike that left him debilitated. After finding a 6-foot-long handmade rope under his mattress, ICE briefly placed Amar on suicide watch in October 2018. The following month, Amar was found unresponsive on the floor of his cell, with pieces of braided bed sheets tied around his neck. He was rushed to St. Joseph Medical Center in Tacoma. 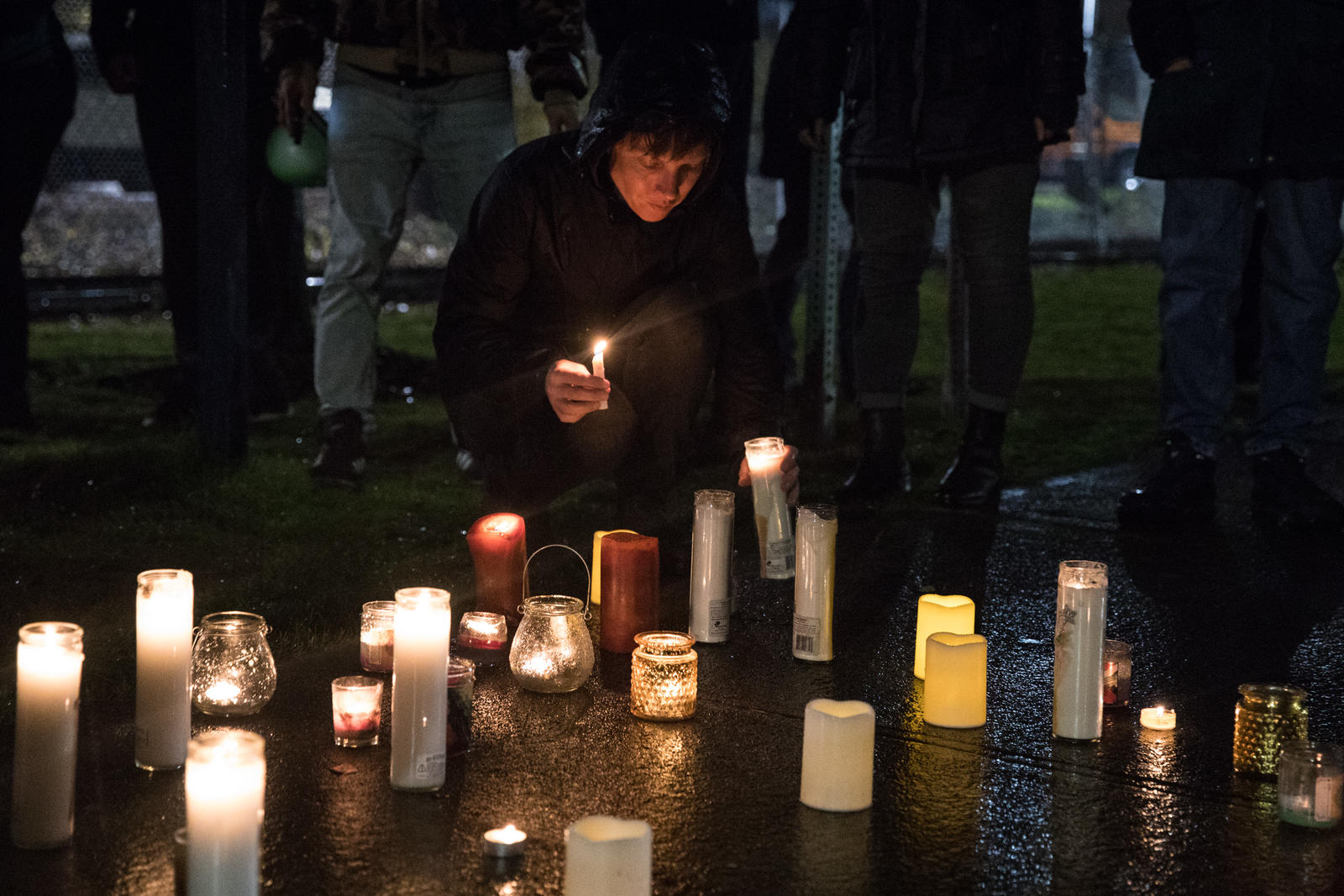 A person lights a candle during a vigil in honor of Mergensana Amar at Northwest Detention Center in Tacoma, Nov. 26, 2018. Amar died while in ICE custody after attempting suicide, months after an ongoing hunger strike. (Photo by Matt M. McKnight/Crosscut)

A person lights a candle during a vigil in honor of Mergensana Amar at Northwest Detention Center in Tacoma, Nov. 26, 2018. Amar died while in ICE custody after attempting suicide, months after an ongoing hunger strike. (Photo by Matt M. McKnight/Crosscut)

Bryan Wilcox, deputy field director at ICE's Seattle office, immediately wrote to colleagues, saying: “A heads up that Amar has committed suicide by hanging. He has a pulse, but has no brain activity. This just happened over the past two hours.”

“Of course, no one knows about this yet, just us,” Wilcox wrote, in an email obtained through a FOIA request.  A subsequent email noted that though this was “an on-going situation,” ICE was preparing a death notice.

But Amar’s medical condition was complicated. In a log, one sergeant noted medical staff had told him Amar was three-fourths brain dead with 0% chance of recovery.

“If he stops taking breaths on his own, he will be considered medically brain dead,” the sergeant wrote.

According to emails obtained through a FOIA, ICE health officials complained that the warden at the facility in Tacoma had at this point attempted to intervene in Amar’s care.

He “talked with the attending and was told of the poor prognosis for this patient. He then indicated to the attending he agreed with her not [to] do any medical interventions other than basic supportive care. Unfortunately this was passed on to the nursing team in ICU,” one email said.

The clinical director of the ICE Health Service Corps, which provides health care for detainees, then described speaking to a doctor: “I let her know our NWDC [Northwest Detention Center] warden does not have any medical authority over this patient, and she would need to work through me and our IHSC administrative team for progress reports and direction of medical care.”

Another email references the warden’s discussion with the trauma surgeon.

He “is adamant ... that the call was ICE's, not his. I'm dubious. ... I think he has potential, but he is still in the BOP [Bureau of Prisons] warden mentality. I'm hoping that you will raise this issue with GEO [GEO Group is the private prison company ICE contracts with to run the Tacoma detention center] at a higher level so word gets back down to the warden that he provides a service, running a business, and is not the final authority on any matters relating to the detainees,” the email reads.

By Sunday, Nov. 18, three days after being admitted into the hospital and after a battery of tests, Amar was officially declared dead.

Yet documents show Amar remained restrained in his hospital bed.

On Nov. 20, a log detailing Amar’s care notes: “Hospital staff are complaining about the use of restraints. Contacted Major (redacted), who stated ... Amar will have leg restraints.”

Amar’s restraints were not removed until the following day, according to documents obtained through a FOIA.

Neither ICE nor GEO Group, the private prison company ICE contracts with to run the Tacoma detention facility, responded to questions this week about the warden or Amar’s care and subsequent death. 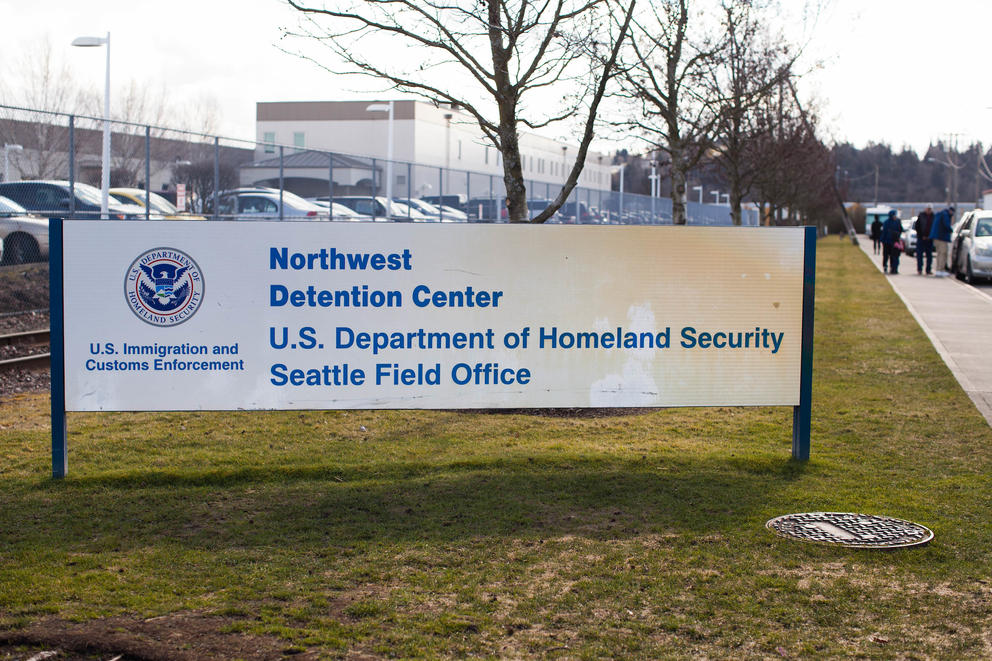 The ICE Detention Center in Tacoma.

The ICE Detention Center in Tacoma.

The week following Amar’s death, as authorities and hospital staff scrambled to reach his family to explain what had happened, Amar remained on life support, even though he had been declared dead.

According to ICE policy, Congress and other officials, as well as the local media and The Associated Press, are to be notified of a detainee’s death within 24 to 48 hours.

Emails show ICE officials in Seattle were well aware of this policy at the time of Amar’s death, but did not follow it.

“Technically Mr. Amar died on Nov. 18. We need some guidance about whether this changes how we message this issue, and how we handle the congressional offices. We need to come up with a plan of how we move forward from here,” wrote one ICE official.

ICE officials stressed that certain individuals in the agency seem to not recognize that, medically and legally, brain death equals death, even if other signs of life remain, such as a heartbeat.

The official goes on to note that Amar is dead “for all intents and purposes. They're just continuing life support measures for the next of kin notification.”

In fact, two days after Amar was declared dead, ICE’s acting field office director in Seattle wrote asking whether anyone had worked on a draft of a death notice since it was due.

“We need to get that finalized and submitted,” the official noted. Yet it wasn’t until approximately a week later, on Monday, Nov. 26, one day after the Pierce County Medical Examiner office had confirmed Amar’s death, that ICE finally issued a notice of his death.

Tanya Roman, a spokesperson for the agency in the Pacific Northwest, did not answer questions this week about why there had been a delay in the death notification process. The Department of Homeland Security's Office of Inspector General said the investigation into Amar’s death it opened in 2018 is still ongoing.

Maru Mora Villalpando of the activist group La Resistencia, which advocated for Amar while he was in the hospital and assisted in sending his ashes to his family, said, “I’m not surprised what they did to Amar.”

“Their power is so big that they even decide when you die,” she said, referring to ICE. “Not when it actually happened, but when it was convenient for them.”

An asylum seeker vowed never to return to Russia. His death in ICE custody sent him back

Records and family members reveal new details about Mergensana Amar, the man who died in Tacoma while in ICE custody.