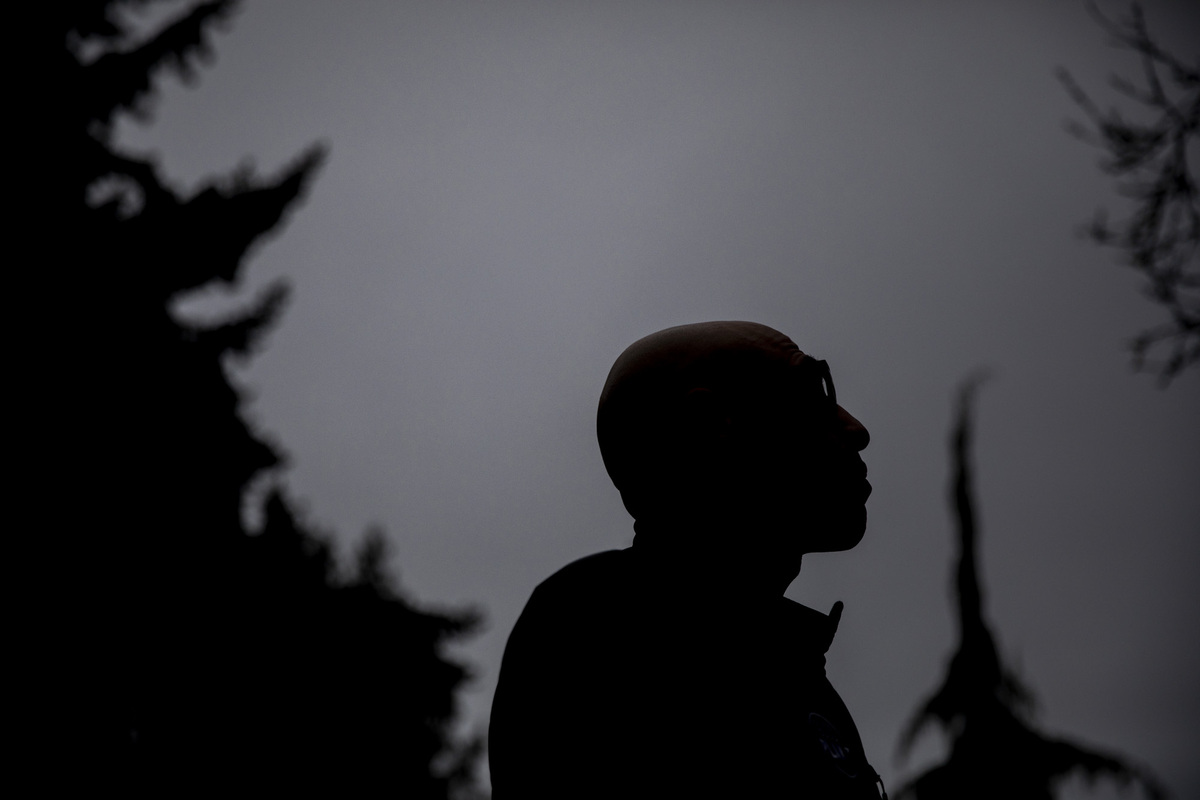 Milo Burshaine outside of his place of work in Bellevue on Dec. 8, 2020. Burshaine contracted COVID-19 in October after sleeping in the same room with someone who tested positive while staying at the Bishop Lewis Work Release facility in Seattle. He was then moved to solitary confinement back in prison. (Dorothy Edwards/Crosscut)

The facility is designed for prisoners with good behavior who are nearing the end of their sentences and are preparing to transition back into the real world. While there, Burshaine, who has a history of drug addiction, worked, attended Alcoholics Anonymous meetings and attempted to reign in his depression. He looked forward to the Washington state Department of Corrections releasing him in a few months.

But instead, Burshaine contracted COVID-19 in October after sleeping in the same room as someone who had tested positive for the virus. Dozens of others at the facility got sick as well. Then, without explanation, after a short stay at King County’s quarantine facility in Issaquah, Burshaine and seven others were thrown back into prison and put in solitary confinement.

“Essentially we caught COVID because of the work release and now you’re going to punish us because we have it,” Burshaine said.

Prisoners, attorneys and other advocates said the Department of Corrections has not only been careless with protocols meant to keep COVID-19 cases in check, but has also lashed out at those who become ill. They accuse the department of stigmatizing those who become sick with the virus, even as cases skyrocket in prisons and work release facilities across the state. Critics blame the department’s lack of an organized response for the rapid spread of the virus.

In response to questions, Rachel Ericson, deputy communications director for the Department of Corrections, said the state established screening and testing guidelines for prisons at the beginning of the pandemic. Ericson said inmates are encouraged to practice social distancing and wash hands frequently. She said that as of Nov. 12, the department had temporarily ceased transfers to work release facilities.

“The Department of Corrections has continually updated its protocols to reflect the latest evidence and science related to COVID-19,” Ericson said in an email. She added that incarcerated people or their families who have safety concerns about prison conditions should report these concerns through the Office of the Corrections Ombuds.

The Office of Corrections Ombuds, the state’s watchdog, has already found fault with the Department of Corrections’ response to the COVID-19 outbreak at the Coyote Ridge Corrections Center in Central Washington. Two people there died in June, and more than 300 prisoners and 100 staff have been infected. Coyote Ridge houses approximately 2,500 inmates.

In a report about the COVID-19 outbreak at Coyote Ridge, investigators said that in addition to guards not wearing masks and failing to isolate symptomatic prisoners, inmates had delayed reporting symptoms because they feared harsh conditions in solitary confinement. The two prisoners who died had waited days to report difficulty breathing, according to the investigation.

That same summer, families of prisoners accused the Department of Corrections of retaliating against six men who contracted the virus and were housed at a different work release facility — Reynolds, in downtown Seattle. Like the men at the Bishop Lewis Work Release facility, the so-called Reynolds six were sent back to prison. Although they were eventually released, the men had been singled out in part because they are Black, Muslim or Indigenous, their families said.

Today, critics say the situation at Bishop Lewis shows that the Department of Corrections’ response to the pandemic isn’t improving even nearly a year into the public health emergency. Instead, the same patterns are emerging. They argue it’s time for Gov. Jay Inslee to reconsider doing more to reduce the prison population, or at the very least ensure those who become ill and speak up aren’t retaliated against.

Earlier this year, Inslee announced that he would be releasing more than 1,100 inmates from prison due to concerns over the coronavirus. Prior to their release, Columbia Legal Services sued Inslee and pushed for the release of thousands more incarcerated persons susceptible to the virus because of age or underlying conditions. That lawsuit was ultimately rejected by the Washington state Supreme Court on the grounds that the plaintiffs had not proved the state failed to protect incarcerated people from COVID-19.

“They are torturing people,” said Twyla Kill, an advocate whose husband was a plaintiff in the lawsuit filed by Columbia Legal Services. “They have the tools and power to reduce the population and fix this, but they choose not to.”

Last month, a third prisoner, 62-year-old Michael Cornethan, died of COVID-19. He had been at the Washington State Penitentiary in Walla Walla serving a life sentence without the possibility of parole for aggravated murder.

Overall, since the beginning of the pandemic, more than 2,000 of Department of Corrections’ inmates in Washington state have tested positive for COVID-19, as have more than 400 staff members, according to the latest coronavirus data. The average population of the Washington state prison system is roughly 16,000.

Critics say the Department of Corrections’ haphazard response to the virus should worry not only those with connections to those locked up, but the community at large.

“The fact that DOC doesn’t take this seriously really jeopardizes our collective health,” said JM Wong, an activist and former nurse. “Something is just not working.”

Wong noted that the Bishop Lewis facility is in a densely populated area, in Seattle’s First Hill neighborhood, and those coming in and out of the building could spread the virus to others in the community. 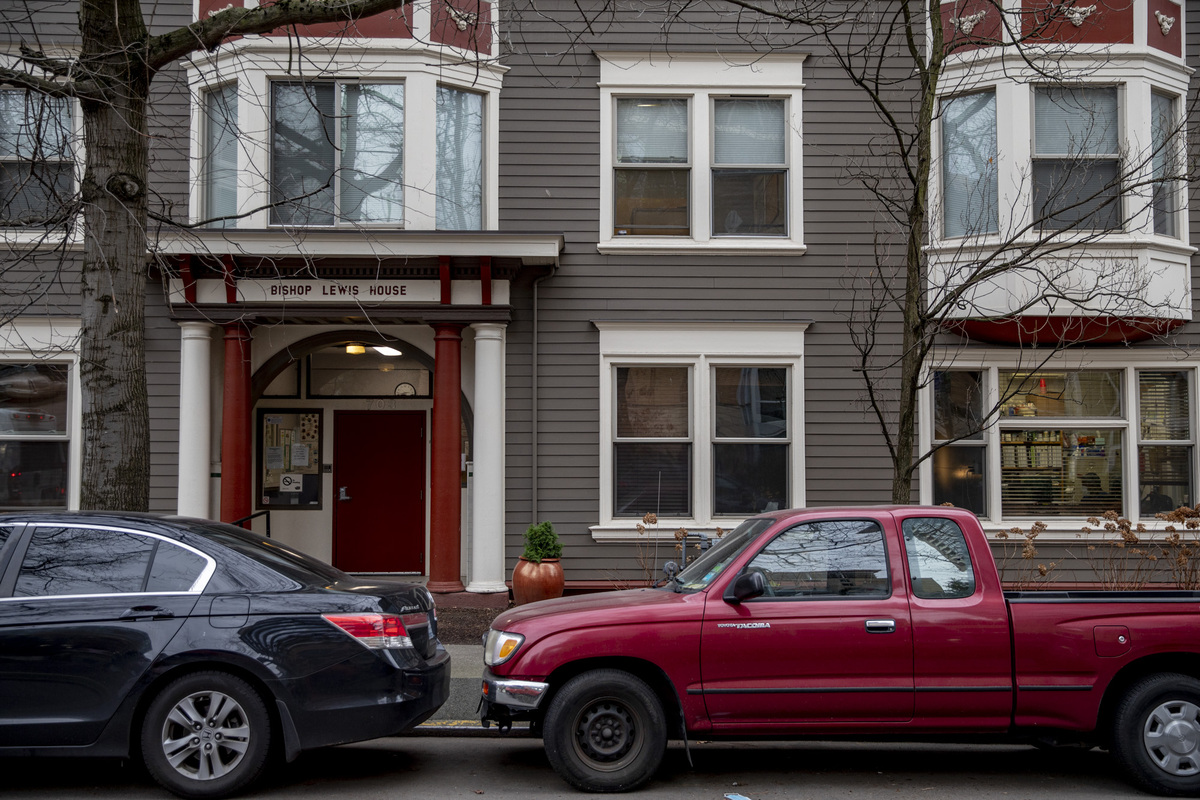 A family member of a person who was housed at the Bishop Lewis facility, and who asked to remain anonymous, said she is among those surprised that even now the Department of Corrections doesn’t seem to have a better plan in place.

“It seemed like nobody knew what was going on,” she said of the staff at Bishop Lewis and the COVID-19 outbreak. “I can understand this sort of thing happening early COVID, but it has been eight months.”

She noted that her family member was not allowed to use the bathroom for hours after contracting the virus and felt uneasy about sharing a room with someone else who was sick and having diarrhea. Other residents said the communal bathrooms were not cleaned in between uses.

“It’s been a nightmare,” said Jade Beavin, a 31-year-old prisoner who was also housed at Bishop Lewis but who, along with others, was transferred back to the prison in Monroe.

Beavin said he believes he got infected after he was asked to clean rooms at the facility, although he was given some pieces of protective equipment.

“It just seems like they’re kinda winging it, to be honest with you,” he said of Bishop Lewis’ response to the virus. “Our health wasn’t their number one concern at that point, I’ll put it that way.”

Beavin said his experience with COVID was “like the flu times 50,” but that he was also troubled by the department’s decision to put men like him back in prison.

“Not all of us are bad people. We’ve just made mistakes. A lot of us are really trying to turn our lives around,” he said.

Joanne Bucklin is grandmother to David Bertram, one of the men who got sick with COVID-19 at Bishop Lewis, only to be transferred to Monroe. She said what bothered her was the solitary confinement her grandson was subjected to.

Bucklin said her 39-year-old grandson suffered a gunshot wound in his head when he was a teenager, which has had long-lasting consequences and has impaired his decision-making skills. Like many of the men at Bishop Lewis, Bertram has a criminal history that stems from issues with substance abuse.

Colton Welch, 32, said the Department of Corrections doesn’t seem to consider the financial fallout prisoners face after losing weeks of work from the illness. He works at Operation Sack Lunch, which provides meals to the homeless.

Welch, now back at home with his wife in Lynnwood, said he was embarrassed he couldn’t show his family he had the money needed to help restart his life.

On Tuesday, the Department of Corrections said that all but one of the men from Bishop Lewis sent back to prison have been released or transferred back to a work release program.

Public defender John Marlow said he hears real fear about the pandemic in the voices of Burshaine and other clients.

“They are not sentenced to a death sentence. That is not what should be happening,” Marlow said. “I would say there is a very common concern about how safety measures and health measures are being followed or ignored when no one else is looking.”

Clarifies where incarcerated people and their families should take concerns about prison conditions.