WA unemployment problems persist, with some going unpaid for months

Nine months into the pandemic, the state’s unemployment system is still rife with issues, and thousands are stuck in limbo. 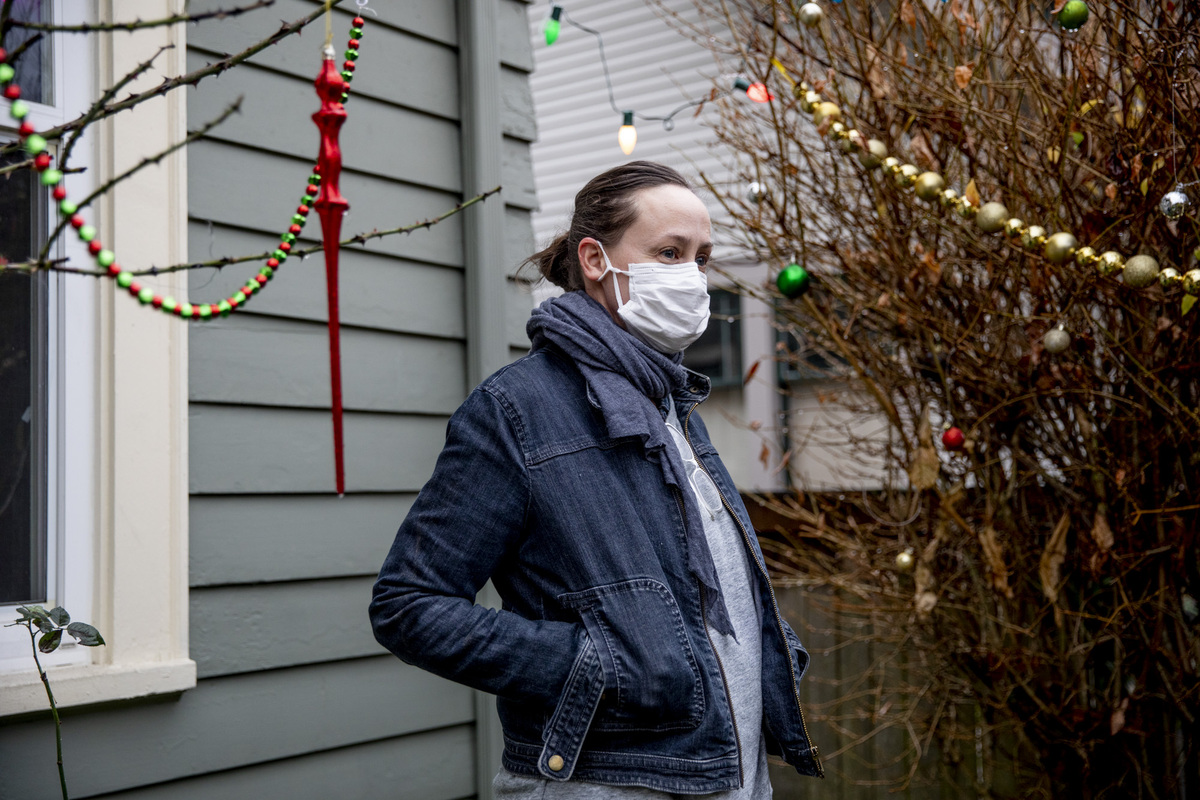 Heather Frey outside of her Seattle home on Dec. 15, 2020. Frey has been filing for pandemic unemployment assistance since March and, as of earlier this week, hadn’t received a single payment yet. (Dorothy Edwards/Crosscut)

Nine months later, the Seattle resident was still waiting on her first unemployment check — and wondering how she was going to pay her bills.

Frey is one of the many self-employed people newly eligible for unemployment benefits under COVID-19 relief programs. Yet, as her experience shows, getting those benefits can still be a challenge, even nine months into the pandemic.

The state Employment Security Department says such delays are rare. As of Dec. 5, the agency said 1.8% of people who had filed for unemployment since March were still waiting for ESD to resolve their claims.

But with this year’s deluge of unemployment applicants, 1.8% still amounts to nearly 27,000 people. And, while ESD normally aims for claims with issues to be resolved within three weeks, the department is now taking nearly 10 weeks to resolve complicated claims, on average.

Frey is finally getting her first payment this week, after multiple calls to the department, her congresswoman, the governor’s office and the media. The status of her weekly claims switched to “paid” over the weekend, shortly after Crosscut emailed ESD about her case.

”Now I’m crying and barely able to breathe from relief,” Frey said afterward. The 48-year-old said she had used up all her savings and, without the arrival of the unemployment payments, would be short on rent this month.

Others are still stuck in some stage of limbo. Juan Gonzalez, a Yakima resident with three children, said he has been filing weekly unemployment claims since April, but has been paid for only eight weeks since the start of the pandemic. He said an ESD employee told him in October that 12 weeks of his claims needed to be transferred from one unemployment program to another. As of earlier this week, that hadn’t happened yet.

Gonzalez said he has to stay home to care for his three children, who are between the ages of 4 and 9. “They have been doing online schoolwork and need my supervision,” the 34-year-old wrote in an email.

He previously worked in a fruit warehouse, packing and sorting — work that brought him into close contact with other people.

Because two of his children have underlying health conditions, Gonzalez wrote, “I can’t take the risk of sending them to school or me working and bringing COVID back to them.”

Caring for children during the pandemic can qualify someone for Pandemic Unemployment Assistance, one of the new unemployment benefits included in the federal Coronavirus Aid, Relief, and Economic Security (CARES) Act. The relief bill also lets workers receive an extra 13 weeks of employment benefits beyond what their state normally would offer.

Rolling out multiple new unemployment programs at once, however, strained Washington state’s employment security system from the outset, said ESD Commissioner Suzi LeVine. So did the fraud issues the state faced early in the pandemic.

“We didn’t have five years to hone a program — we didn’t even have five months,” LeVine said Tuesday. “We had a minute and a half on March 27, when Congress passed it.”

She said other states have experienced many of the same problems. In fact, Washington was ahead of the curve in the spring when it was able to implement the new federal unemployment programs in three weeks, LeVine said.

Some of that same expediency, however, may have contributed to Washington becoming a target for criminals. State Sen. Karen Keiser, D-Kent, who chairs the Senate Commerce and Labor Committee, said the decision to get rid of the typical one-week waiting period before people can receive benefits helped many jobless workers get paid more quickly. At the same time, she said, it likely made it easier for a Nigerian fraud ring to steal between $550 million and $650 million by filing fraudulent claims.

So far, state officials say they have recovered about $356 million of the money stolen by that fraud operation, dubbed “Scattered Canary.” LeVine said at least 37 states have reported unemployment fraud problems during the pandemic, with officials across the country looking to Washington state as a model for how to recover stolen funds.

But the fraud problem also caused Washington state to tighten its automated reviews of people’s unemployment applications. Sometimes, legitimate applications are flagged by the anti-fraud system as suspicious, which can cause delays, said ESD spokesperson Nick Demerice.

Usually, people can move their claim along by uploading a copy of their driver’s license or other requested documents to verify their identity, Demerice said.

Yet some claimants have said they never received notices telling them they needed to resolve a fraud concern or requesting additional information. One claimant who said he has been waiting to get paid since August said he had no idea any action from him was necessary until he finally was able to get someone on the phone in November.

The backlog at ESD call centers has been a persistent issue, Demerice said. He said that in normal times, when people had a problem with a claim, a phone call could easily resolve the matter. But the high volume of calls now means that people may languish for weeks, not knowing that there is a step they needed to take to get their claim moving, he said.

While ESD officials have boosted staffing by about 1,200 people since the start of the pandemic, the agency still hasn’t been able to keep up with the thousands of calls per second it received in the spring, nor the hundreds per second pouring in over the past few weeks, Demerice said.

“Usually, you can just get on the phone with somebody, and they’ll talk you through it,” Demerice said. “That’s not the case right now.”

That’s been a huge frustration for Heather Culver, who said before the pandemic she made much of her income designing costumes for small theaters.

While Culver said she has collected a small unemployment check for a part-time job that ended in 2019, she hasn’t been able to get unemployment payments corresponding to the majority of her lost income, which came from the sewing work she did as an independent contractor.

It's possible Culver may not qualify for further assistance, but she hasn't been able to get answers yet.

“I have emailed questions and not received any responses,” said Culver, a 50-year-old Seattle resident. “I have never been able to get through on the telephone to anyone.”

Instead, when she calls, she gets an automated message telling her to call back later.

“They will say, ‘We aren’t taking calls due to high call volume.’ It’s like, is anybody answering  the phone?” Culver said.

Then there are the notices of overpayment that have been going out recently. Frey, the out-of-work bookseller, said she got an overpayment notice last month before she received a single unemployment payment.

As it turns out, ESD sent out thousands of notices last month informing people they needed to fill out a claim with new information to determine whether they had been receiving benefits from the correct program. If people didn’t do so promptly, they got a notice that their claim was denied — and that they had been overpaid for all the benefits they had received previously.

Workers who were paid from the wrong program also received overpayment notices, even if they weren’t expected to pay any money back. Many of those issues are being resolved by transferring workers to the correct program, Demerice said, without requiring workers to pay anything.

People who didn’t reply promptly to a notice have now been given “a do-over,” he said.

Keiser, the chair of the Senate Labor and Commerce Committee, said she understands sending those letters was a legal requirement, but she thinks it could have been approached in a better way.

“It is just freaking people out, of course, and making them completely terrified. It’s awful,” said Keiser, who said the overpayment notice “could have been more caring in the way it was presented.”

Senate Minority Leader John Braun, R-Centralia, said that although he thinks ESD has gotten better in recent months  when it comes to processing claims, “it still isn’t anywhere near where it should be.”

“It is a challenging time, no doubt, but 10 months later you can’t get it figured out? That shouldn’t be acceptable,” Braun said this week.

Demerice and LeVine said the agency has made several improvements in recent months to make it easier for jobless workers to navigate the system. Those include consolidating phone centers so people experience fewer dropped calls, as well as redesigning the agency’s website and updating the language of some eligibility questions to help people avoid making mistakes in their application.

About 65,000 people also were able to reopen their unemployment claims without issues last month, after the state reimposed restrictions on indoor dining and other activities, Demerice said. In August and September, ESD successfully rolled out another new program, Lost Wages Assistance, without the complications seen in the spring.

The agency has been preparing for the possibility that the state will have to extend pandemic unemployment benefits on its own, if Congress doesn’t pass a new relief measure before the current benefits expire Dec. 26. Earlier this month, Gov. Jay Inslee said he wouldn’t let those benefits expire, even if the federal government doesn’t act.

Frey, meanwhile, is relieved she is finally getting paid, but questions why it had to be so hard.

“It just feels like they’re not helping,” she said. “... I promise you, there are people who have fallen through the cracks.”