Three additional SPD cops are being examined for any possible involvement in the riots. 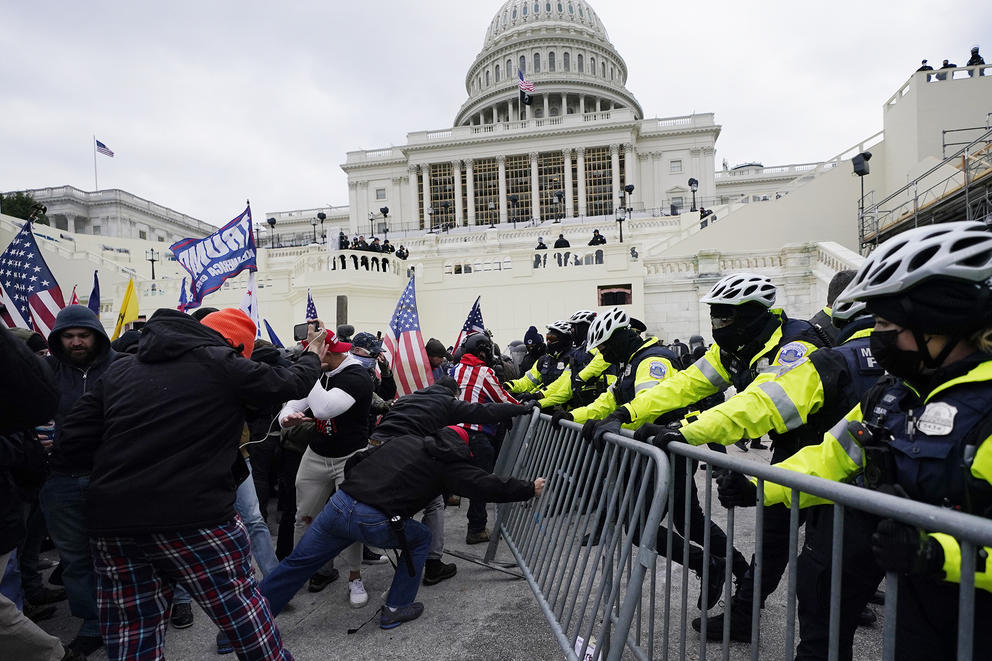 Trump supporters try to break through a police barrier, Wednesday, Jan. 6, 2021, at the Capitol in Washington. As Congress prepares to affirm President-elect Joe Biden's victory, thousands of people have gathered to show their support for President Donald Trump and his claims of election fraud. (AP Photo/Julio Cortez)

At least five Seattle police officers attended the Jan. 6 rally in Washington, D.C., that fed into the riot at the U.S. Capitol Building, according to Andrew Myerberg, the head of Seattle’s Office of Police Accountability.

Myerberg disclosed that two officers were added to the previous list of two during a meeting with Seattle’s Community Police Commission, a body created as a part of the ongoing federal oversight of the Seattle Police Department. Myerberg received notice of a fifth later that afternoon.

“I anticipate that there may be more,” he told the commissioners. His office will be interviewing the five and pulling video from the Capitol. “And if it turns out there were people crossing barricades and going into the Capitol, we will refer it to the FBI for additional investigation,” he said.

At least three officers self-reported their trips to Washington, D.C., Myerberg said. One is named Jason Marchione, Crosscut has learned from multiple sources who requested anonymity to speak candidly. Marchione was hired by the department in 2017, according to Open Payrolls, and was recently stationed at the South Precinct, said one source.

Myerberg did not disclose the names of the officers being examined by OPA. The voicemail box for Marchione was full and he did not immediately respond to a text message and email seeking comment.

The investigation, Myerberg said, will be complex and require “a little bit of a deeper dive” in order to determine the extent of the officers’ involvement. Expressing political views is protected under the officers’ First Amendment rights; breaking into the Capitol is not.

Acting Seattle Police Chief Adrian Diaz has said officers may exercise their First Amendment rights, but reiterated Wednesday that he would fire any officer who directly took part in the insurrection.

"I made it very clear when I assumed this position, that any violation of community trust or any action that threatens our ability to serve this city will be met with full accountability," he said. "We cannot violate the same laws we are sworn to protect. We cannot allow violent or intimidating direct action to become acceptable in our society. If any SPD employee participated directly in assaulting the Capitol, I will terminate them. This department DOES NOT believe in or support this type of behavior."

The first two officers being investigated have been suspended with pay, but Diaz said the three additional officers remain on duty.

Relatively little is known about the five officers known to have traveled to Washington, D.C., including Marchione. But, according to one source, Marchione was a known fan of former President Donald Trump and was not shy about expressing those views.

Members of the commission, which was created to bring community members’ voices into police accountability, were clearly concerned by the news that more officers attended the Jan. 6 rallies.

“I don’t understand how we can derive any other decision other than they were there to spur what those people did to storm the Capitol,” said Commissioner Brandy Grant. “I think the number of considerations that are given to law enforcement … I wish those same kinds of considerations and respect would have been given to the people who have been marching and protesting in the streets of Seattle.”

Officer Mark Mullens — who fills the seat on the commission reserved for one rank-and-file officer — said, as a Black officer, he too was worried. He said officers, especially African American ones, must fear attacks from the streets, including from white supremacists. “It’s unsettling to think that there’s a possibility that someone might be behind you, backing you up that’s doing that as well,” he said.

Office of Police Accountability investigations must be completed within 180 days, at which point Myerberg will conclude whether he believes there was a violation of policy or not. The final decision regarding discipline lies with Diaz, although the city’s police unions may appeal to an outside arbitrator.

The riot in at the Capitol resulted in five deaths and the temporary delay to the certification of the election of now-President Joe Biden. Trump faces an impeachment trial for allegedly inciting the mob, even after he left the White House on Wednesday.