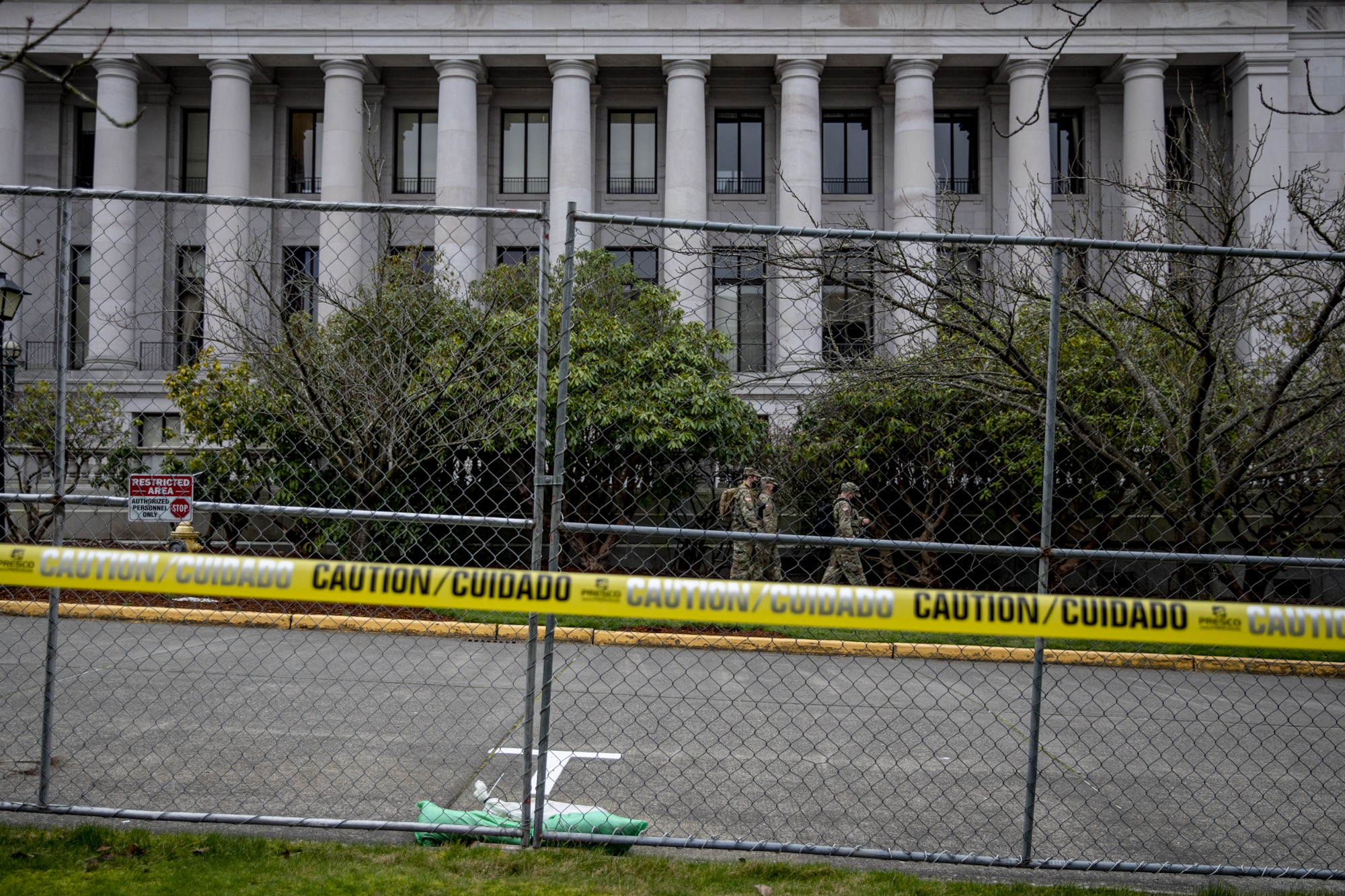 A fog set in at the Washington State Capitol in Olympia on Wednesday morning, as Democrat Joe Biden was sworn in as the 46th president of the United States. What did not descend on the state Capitol, however, were groups of armed protesters, who officials feared might come to cause trouble following the riot at the U.S. Capitol and breach of the Washington Governor’s Mansion two weeks ago.

Washington National Guard troops were on site to guard against any repeat of the violence and disruption seen Jan. 6.

While security forces were less visible than they have been in recent days, a spokesperson for the Washington State Patrol said they were still there protecting the seat of the Washington state government. He declined to share more information, but said the force was not small.

“When you hear the phrase ‘hundreds,’ you are in the right ballpark,” State Patrol spokesperson Chris Loftis said Wednesday morning.

For the State Patrol, the added security at the Capitol has cost at least $1.5 million in the past two weeks in personnel alone, Loftis said. That number, which is likely to rise, doesn’t include the cost of having National Guard troops stationed at the Capitol.

A spokesperson for the state Military Department said the cost of the National Guard deployment is likely to be even higher, but the final price tag wouldn't be clear for a few weeks. 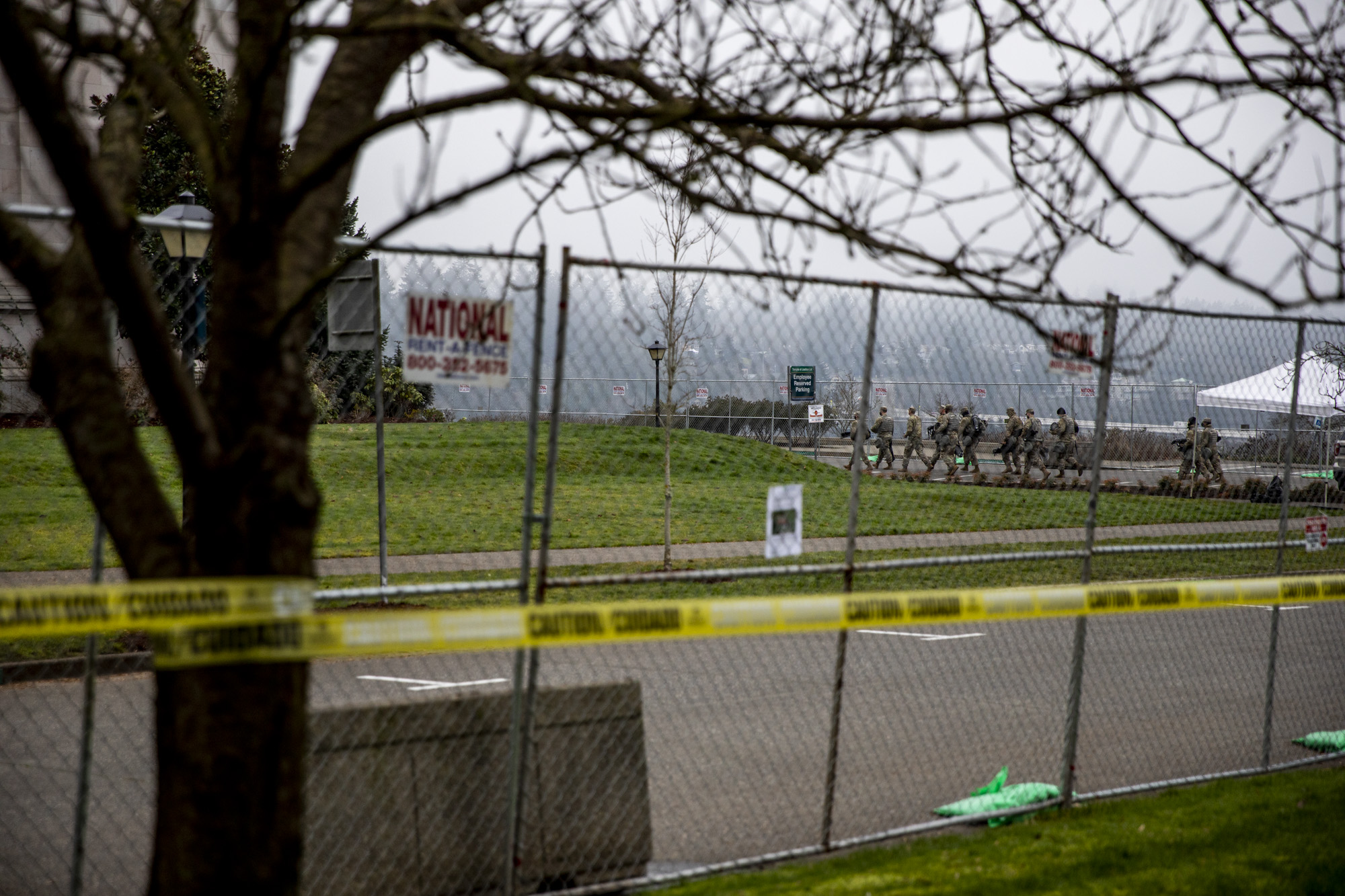 At midday Wednesday, a lone Trump supporter, John Hess, stood outside a barricade set up by state troopers, at some distance from the state Capitol building, holding a sign that called Biden a “traitor” and a “thief.”

“He’s taken the position of president in a stolen election. That makes him a traitor,” said Hess, 66.

Election officials in Washington state and across the country have said the election was fairly and accurately conducted, countering baseless claims of election fraud promoted by Trump and others. Yet Hess, of Centralia, said he still doesn’t trust the election results, a conviction that has caused him to show up at the state Capitol several times in recent weeks to protest.

On Inauguration Day, Hess said he ran into a group of five or six people protesting earlier in the day, but they left before he did. He’s concerned that Biden’s focus on green energy will cause a spike in energy costs he can’t afford, and that Biden will relax Trump’s hard-line immigration policies, which he thinks would depress wages for U.S. workers. 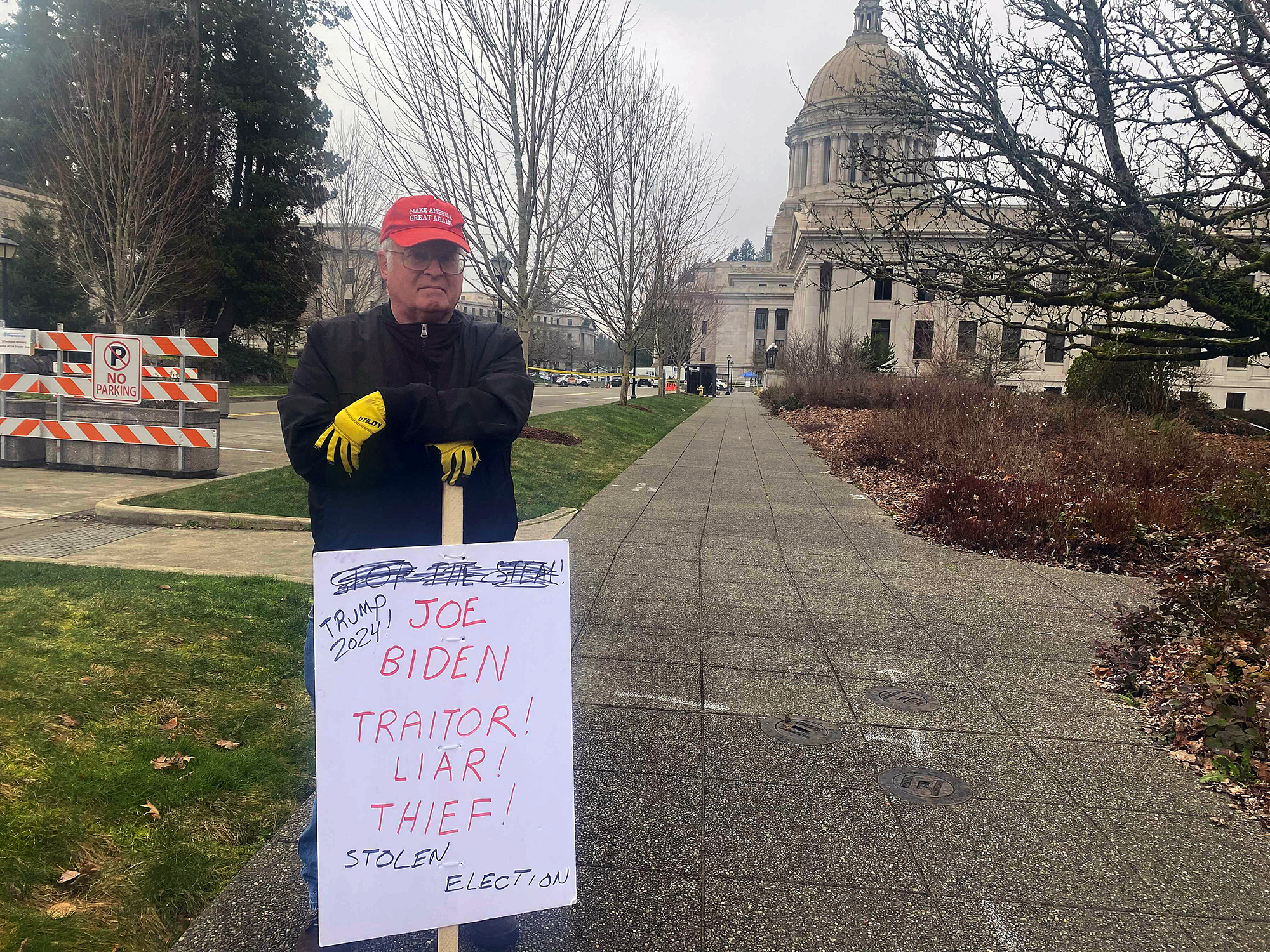 John Hess holding a sign describing President Joe Biden as a “traitor” and a “thief," as he stands outside a barricade set up by state troopers at the Washington state Capitol building, Jan. 20, 2021. (Melissa Santos/Crosscut)

John Hess holding a sign describing President Joe Biden as a “traitor” and a “thief," as he stands outside a barricade set up by state troopers at the Washington state Capitol building, Jan. 20, 2021. (Melissa Santos/Crosscut)

Last week, the FBI warned of armed protests planned at all 50 state Capitols across the country, following the riot in which a mob stormed the U.S. Capitol Building on Jan. 6. That same day, armed protesters broke through the gate of the Washington Governor’s Mansion in Olympia, temporarily occupying the grounds.

As of Tuesday morning, the FBI’s Seattle field office had “not received any specific and substantiated threat to the state Capitol in Olympia or any other government buildings in our area,” public affairs specialist Amy Alexander wrote in an email. The FBI office said the situation remained equally calm Wednesday.

Still, Alexander wrote, the FBI was “maintaining a heightened posture” throughout Inauguration Day to monitor for emerging threats.

In Olympia, most state employees were told to stay away from the Capitol campus until Inauguration Day had passed, in anticipation of possible disruptive protests, according to an advisory issued last week by the state Department of Enterprise Services. 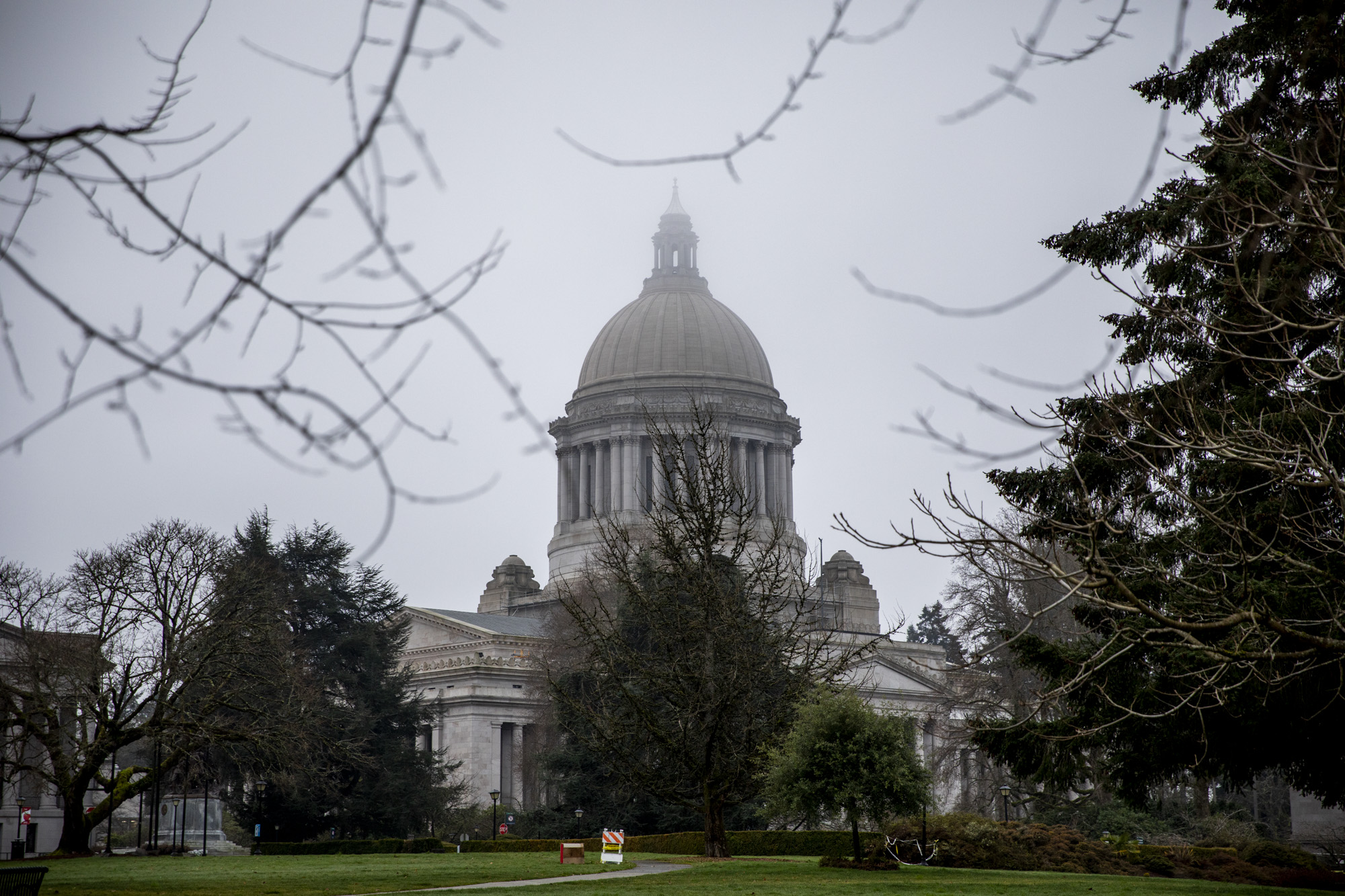 Some Washingtonians watching the inauguration from their homes, or in their cars on the way to work, expressed mostly relief after the new president and vice president were sworn in.

Martin LeBlanc, an outdoor consultant who lives in the Greenwood neighborhood of Seattle, said he watched the inauguration with his 10-year-old daughter, who he said is vice president of her school and “very political.”

Given the pandemic and mayhem at the U.S. Capitol two weeks ago, LeBlanc said he thought “it went as well as it could have.”

“I actually got up in the morning to make sure Trump left,” LeBlanc said. “I don’t put anything past him.”

But what stood out to LeBlanc the most was his daughter’s reaction to watching the first female vice president take office during a peaceful transition of power.

LeBlanc said even at such a young age, his daughter had been aware of the violence at the Capitol and, just like him, was relieved today.

Tom Nissley, the 53-year-old owner of Phinney Books in North Seattle, said he listened to Biden’s speech while sitting in his car and appreciated his rhetoric on unity.

“Unity with accountability is what I’m looking for,” Nissley said. “Unity has not been the theme of the last four years.”

Nissley said while he worried about some Democrats going too far in reaching across the aisle, he also recognized that the Biden administration had come in with a strong agenda.

At the top of Nissley’s list of what he hopes to see the new administration accomplish is solidifying voting rights, distributing the COVID-19 vaccine and holding people, including Trump, accountable for the storming of the Capitol on Jan. 6.

“I want us to come together, too,” Nissley added.

The quiet at the Capitol in Olympia, accompanied by roadblocks and chain-link fencing on the perimeter, was especially unusual for mid-January, when the state legislative session normally is in full swing. While the coronavirus has caused legislative proceedings to move mostly online, with only certain lawmakers coming to the Capitol, even some top legislative leaders said Wednesday that they were staying away.

Loftis of the State Patrol said state officials are hopeful that they will be able to gradually draw down forces on the Capitol campus in the coming days. But given the recent storming of the U.S. Capitol and the incursion at the Washington Governor’s Mansion, which Loftis called “page-turning events,” it’s possible more security will be needed in the long term, he said. 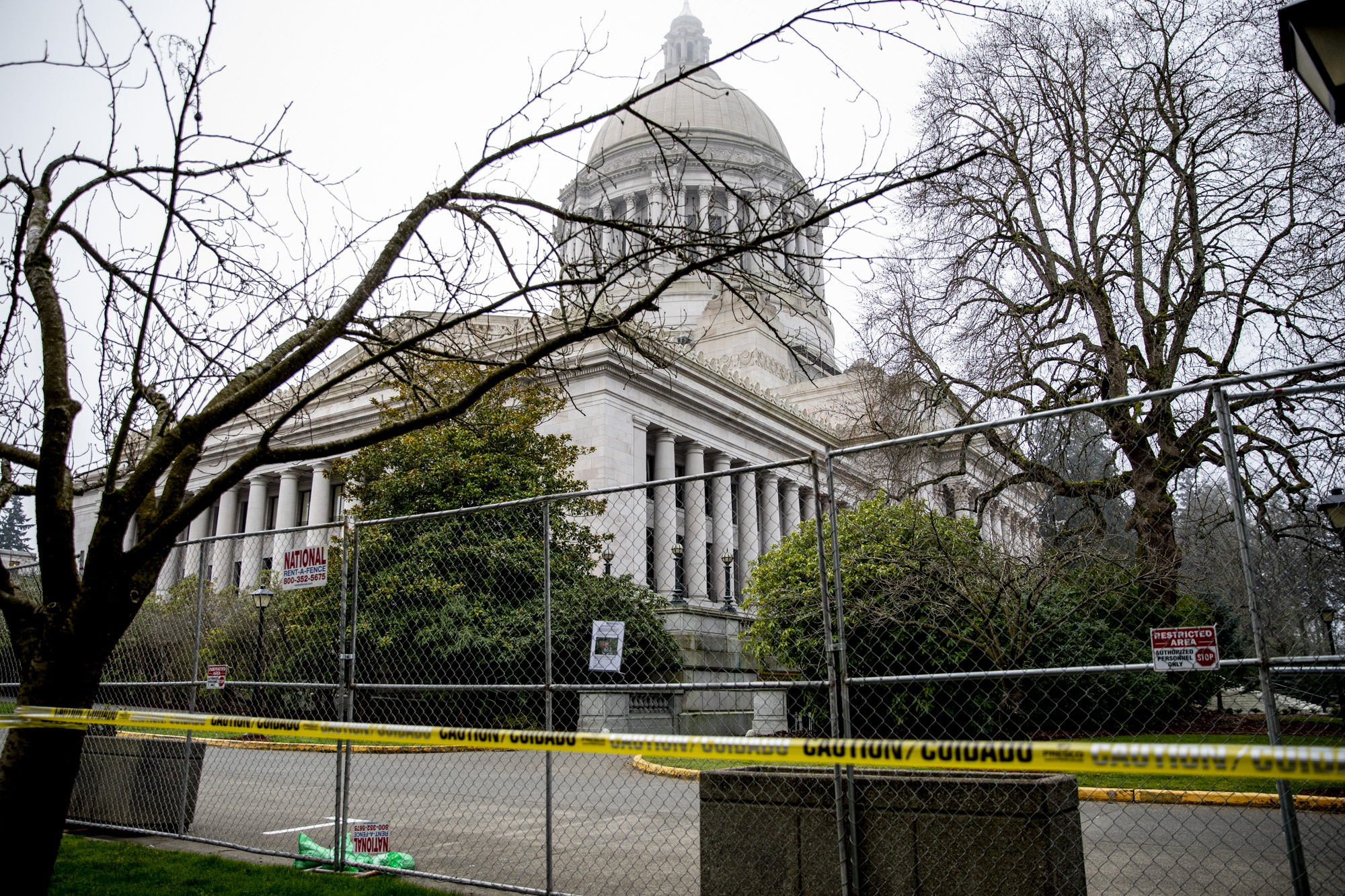 Officials said they believe the added security at the state Capitol has helped prevent a repeat of the Jan. 6 events, which resulted in two broken gates at the Governor’s Mansion in Olympia and the deaths of five people in Washington, D.C.

For those who question whether the ramped-up security has been necessary, or a worthwhile use of funds, Loftis asked, “How much money would we as a country be willing to spend to go back to Jan. 6 and take the assault on our nation’s Capitol out of our history books?”

The governor’s current order authorizing the Washington National Guard to patrol the state Capitol expires at midnight on Jan. 22, unless it is extended.

Since Jan. 6, three people have been arrested in connection with protests at the state Capitol, according to the State Patrol.

One was a person who drove a recreational vehicle into a restricted security area by the Capitol building on Jan. 11, the first day of the 2021 state legislative session. That person was arrested for refusing to comply with an order to move the vehicle, Loftis said.

Another person was arrested that same day after entering the restricted area “purposefully and very flamboyantly,” Loftis said. Law enforcement officials soon discovered he had been involved in the breach of the Governor’s Mansion the week before, so they arrested him for criminal trespassing, Loftis said.

A third person was arrested for second-degree assault, criminal trespassing and felony harassment in connection with the events in the state Capitol campus Jan. 6. The State Patrol said the man threatened and pepper sprayed members of the media, in addition to particupating in the illegal incursion at the governor’s mansion.

Law enforcement officials encouraged anyone with information about possible violent activity to report it.

The FBI’s Seattle field office urged people to call 206-622-0460 if they know of potential violence at any upcoming protest or event. Tips can also be submitted via tips.fbi.gov.