Only 55% of WA voters say they want to be vaccinated, poll says

A new Crosscut/Elway poll found vaccination interest in the state is much lower than needed for herd immunity under federal guidelines. 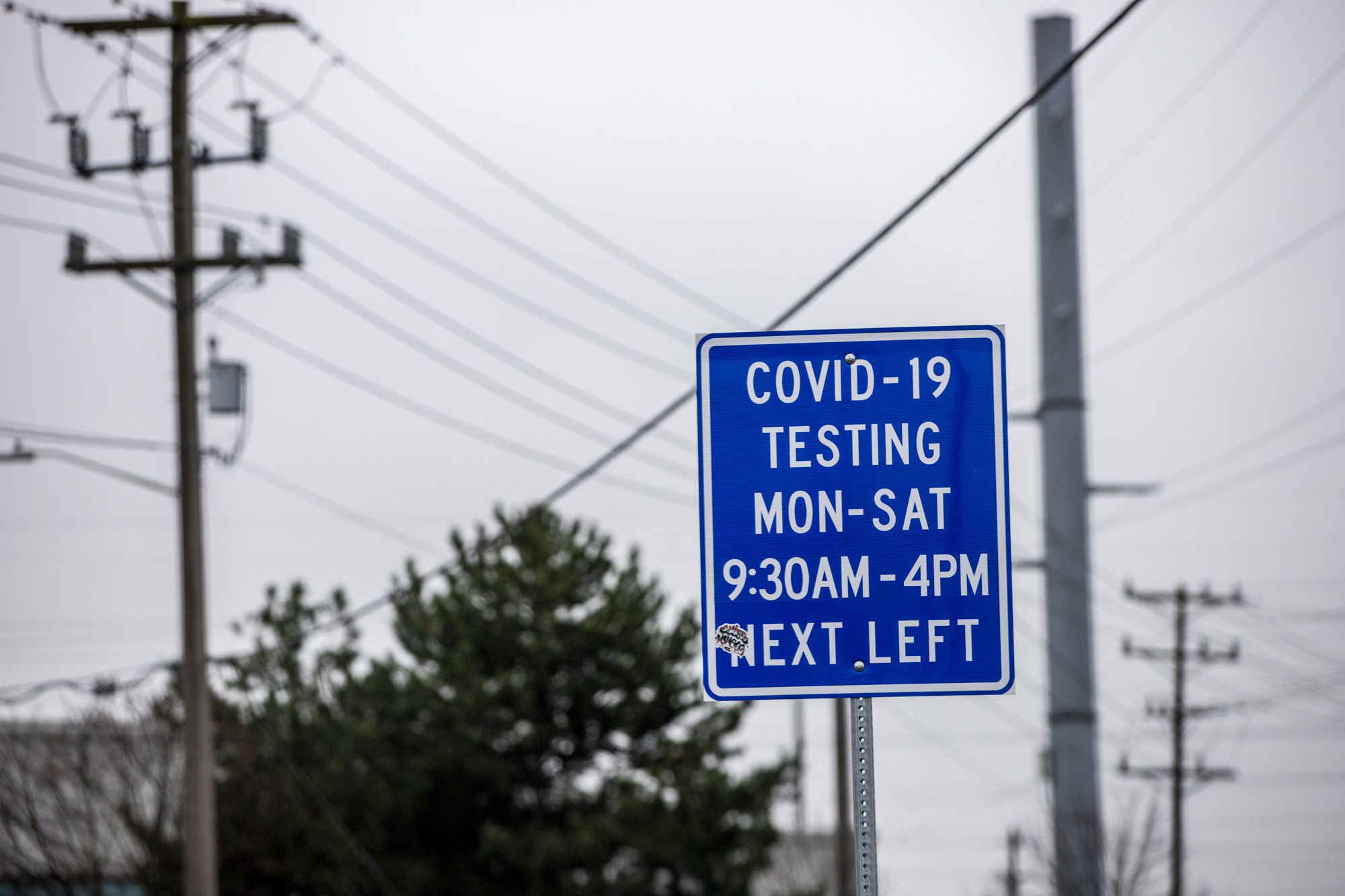 Just over half of Washingtonians intend to get vaccinated when a coronavirus vaccine is available to them, according to a new statewide poll. That would mean enough people are uncertain about the vaccines to put state and federal health goals in jeopardy.

State and federal health officials have set a vaccination goal of at least 70%, the estimated point at which the U.S. population would likely achieve herd immunity, effectively defeating the virus.

A national survey conducted earlier in December by The Associated Press-NORC Center for Public Affairs Research uncovered a similar level of uncertainty about coronavirus vaccines. About a quarter of U.S. adults surveyed said they weren’t sure if they wanted to get vaccinated against the coronavirus and another quarter said they would not get a vaccine.

The Crosscut/Elway Poll found Democrats, older adults and women were most likely to say they wanted to get vaccinated as soon as possible. On the other hand, Republicans and people who live in Eastern Washington or rural areas were most likely to refuse a vaccine or wanted to “wait and see.”

Matthew Hearn, 48, who lives in rural northeastern Washington and participated in the Washington survey, said he was doing other things to keep himself and his family safe from COVID-19 — staying home, wearing a mask — but he planned to say no when he reaches the front of the line to get the vaccine.

Hearn, who has seen numerous friends and family members get sick with coronavirus, said he was concerned with the speed at which the vaccines were developed and he felt scientists won’t know all the potential impacts until a lot more people are vaccinated.

“The long-term ramifications are what I’m really concerned about. That takes time,” said Hearn, who runs his own business and lives in Rice, Stevens County.

Hearn expects he has a good chance of weathering the coronavirus with just his own natural immune response and doesn’t want to be a human tester for the vaccine. In the meantime, he’s staying home as much as possible, ordering online, not going to church and not visiting friends or family, even for holidays.

Hearn acknowledged that he could potentially be transformed from a “no” on the vaccine to a “wait and see what happens,” since he’s not anti-vaccine in general, although he does not get a flu shot.

“I have a really good immune system. I rarely get sick and if I do, I kill it fairly quickly,” he added. 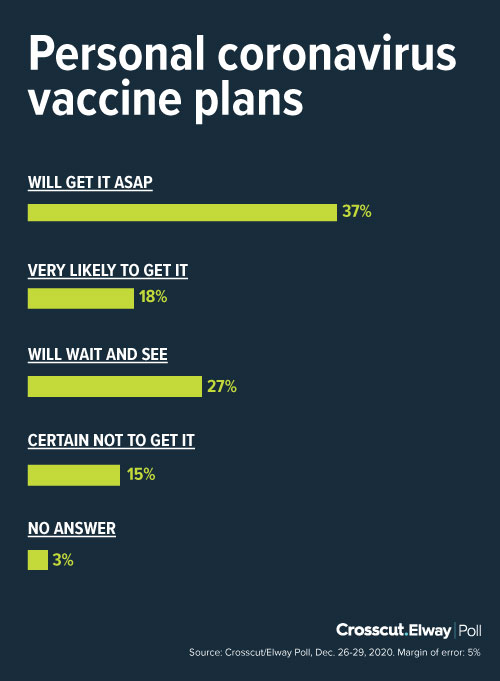 Maren Kiemen, 29, who lives in Spanaway, has a different perspective on vaccination, even though she is relatively healthy and in an age group less likely to get gravely ill from the coronavirus.

“I think it’s a responsibility to the community,” she said. She used grocery shopping to illustrate her point of view. While she doesn’t worry about catching someone else’s coronavirus on an orange that she touched; she would worry about someone older and more fragile getting sick from touching an orange she has handled. Both of her parents contracted the virus in Minnesota, but have recovered.

The Crosscut/Elway Poll of 408 registered voters conducted Dec. 26 through 29 has a 5% margin of error at the 95% confidence level, which means that if the survey had been conducted 100 times, the results would be within 5 percentage points of the results reported here at least 95 times.

Many of the people polled across Washington said they had been affected by the pandemic in some way: 10% had the virus or someone in their household had, 55% knew someone personally who had the coronavirus, 19% had their work hours reduced, 20% had been furloughed or lost their job, 9% had missed a mortgage or rent payment because of the virus. Just 23% said they hadn’t experienced any of these impacts.

Some of these COVID-19 impact numbers are much higher than the responses in a similar Crosscut/Elway Poll conducted in July, which found 35% knew someone personally who had contracted the coronavirus, 16% had their work hours reduced, 18% had been furloughed or lost their job and 6% had missed a mortgage or rent payment because of the virus. In July, 33% said they hadn’t experienced any of these impacts. 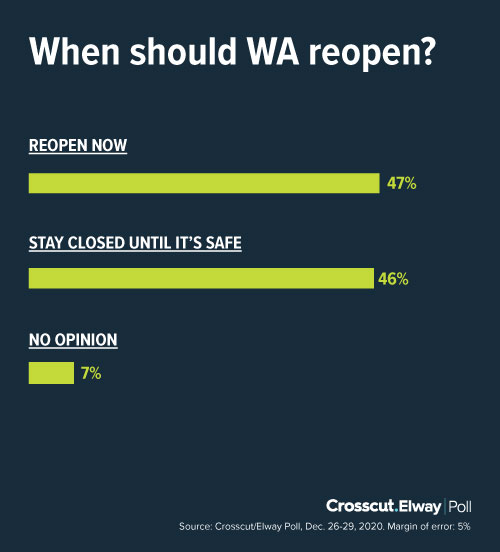 Most Washingtonians polled in December said they were staying home alone or just with members of their household to celebrate the holidays, as Gov. Jay Inslee had asked, after state data indicated people were spreading the virus through small gatherings. But 10% said they were celebrating with friends and 5% planned to go out to a restaurant or to a holiday party.

The poll also found Washingtonians were almost equally split about whether the state should move toward reopening the economy or keep coronavirus restrictions in place. Forty-seven percent said the shutdown of businesses and social gatherings had gone too far and lasted long enough. Forty-six percent said the shutdown measures needed to stay in place until scientists tell us it is safe to open back up.

This split mirrors the findings of other Crosscut/Elway polls conducted since the coronavirus came to Washington last year. Both a political divide, and a divide between Eastern and Western Washington, was clearly evident throughout this poll.

Somewhat surprisingly, the poll found that 53% of people who had experienced COVID-19 in their own family said it was time to reopen the economy. But they were also among the most likely to say they wear a mask whenever they leave their home (50%) or cannot physically distance from others (25%).

Hearn was squarely in the open-back-up camp, a point of view shared by others in Eastern Washington, men, political independents and rural residents, like himself. Urban Democrats and women said they wanted to see the restrictions remain for now.

“At the end of the day, people are responsible for their own lives,” said Hearn, though he did add that his reason for wanting to see the economy reopened was more about fairness. The business consultant said big box stores are open and filled with customers, but “small businesses don’t have a shot.”

Kiemen, who works in marketing and has been working from home for several years, said she thinks Inslee has taken the right approach to the pandemic, and she and her husband have followed his advice closely. The poll found 58% of people working from home agreed with Kiemen that the restrictions should remain for now.

“We’ve limited most of our social interactions and pretty much stayed at home,” she said, acknowledging that some friendships have been strained with people who aren’t following the rules as strictly.

She does think the state government could have done a much better job from a communication standpoint, instead causing too much confusion and anxiety. Kiemen said she and her husband are comfortable waiting at home until enough of the country and her community have reached vaccination goals, but she noted they are among the people who have not suffered an economic impact from the virus.

“My family has been very lucky,” she said.