Losing local access to the archives could mean a severed connection for tribes to their culture and important resources. 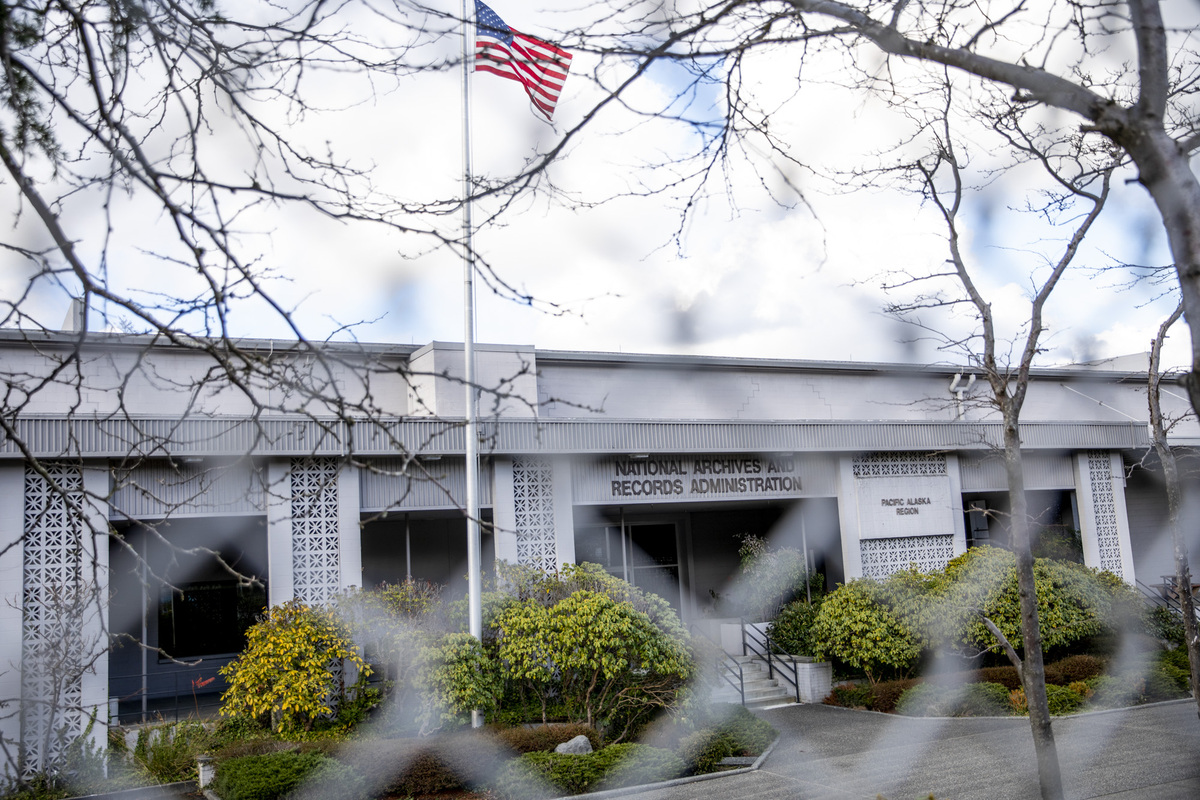 The National Archives and Records Administration building in Seattle on Jan. 25, 2020. (Dorothy Edwards/Crosscut)

In January 2020, when Tom Wooten first heard that the National Archives building in Seattle would be sold, it was already too late. The nearly million boxes of historical records stored within  — including an extensive collection of tribal documents and materials — would be housed elsewhere, possibly in locations as far away as California and Missouri.

“Basically, we found out the decision had already been made,” says Wooten, chairman of the Samish Indian Nation. A meeting he had hoped would allow tribes to express their concerns instead became one where federal officials “were just telling us what their plans were,” he says.

Many tribes throughout the Pacific Northwest found out about the decision after it had been made, quickly drawing concern from tribal leaders.

For tribes, the documents are more than momentos from distant history: They contain critical information, from genealogical records to drafts of tribal treaties. Like many other Native people with roots in this region, Wooten says  he can trace his entire lineage in those documents.

“My family’s story is right there,” he says. “You can’t get much more personal than that.”

For many tribes, the documents housed in the building are a key resource for protecting their rights as Indigenous nations. Wooten says information found in the building helped the Samish win back status as a federally recognized tribe in 1996 after losing it because of a clerical error made by the Bureau of Indian Affairs in 1969.

“Through 27 years of litigation, with the help of the documents in the archives, we were able to regain our recognition that we lost for an unintentional reason,” he says.

The need is still there for other tribes that remain unrecognized. “If they were to be forced to travel to get that information, it would be detrimental to their efforts,” he says.

Dozens of tribes throughout the Pacific Northwest — alongside other community organizations with history in this area, like the Chinese American Citizens Alliance and the Wing Luke Memorial Foundation — have joined a lawsuit led by state Attorney General Bob Ferguson to contest the sale. The suit was filed in early January.

“Barring the attorney general of Washington’s complaint, we didn’t really see any way of stopping things, or at least slowing things down so we could talk about it,” Wooten says.

The building was originally one of a dozen federal properties identified last year by the Public Buildings Reform Board as  “surplus property.” At first, the board intended to sell the buildings individually in mid-2021. But it later announced that, because of the pandemic, the properties would be bundled together and sold early this year, giving critics of the sale less time to fight it. The expected date of sale is still uncertain.

The lawsuit argues that the National Archives building wasn’t eligible for an accelerated sale process since it’s used for research connected to federal programs categorized as agricultural, recreational or conservation — all activities that would make it exempt under federal law. It also says that the federal government failed to coordinate with tribal governments, which violates tribal-federal consultation law. There are also statements throughout the 87-page lawsuit ranging from tribal members to members of the Chinese and Japanese American community with history in this area who testify to the personal importance of the archives.

Annette Bryan, a Puyallup Tribal Council member, describes the documents as particularly irreplaceable for tribes that have historically passed down information orally. Much of the rare documentation that exists, she says, is kept in those archives, making them “absolutely precious.”

“We’ve gone there for all the years it’s been there,” she says. “And we’ll continue to need to go there for family names, ceremonies, songs.”

Brandon Reynon, historic preservation officer of the Puyallup Tribe of Indians, says his department’s staff visits the archives as a group once a year in an effort to sort through the information and digitize it. Many members also go independently throughout the year. Each time, he gets lost in the documents, he says, often uncovering deeply personal information.

“We had a co-worker [who] found some records that were of her aunt,” he says. “She’d always heard about her through her family history, but now here she was, looking at actual records, her writing.”

Being present with the documents in person, he says, is an integral part of the experience: “You’re able to pick up how they would have talked because it’s just their handwriting that you’re reading. You’re able to connect with your ancestors in no other way that you can.”

In an email, a spokesperson says the National Archives is interested in digitizing the archives for remote access “in order to make the records available to the public regardless of location and in a manner that is free and online.” It estimates that the records within the building that are available to the public can be digitized within three years.

But Reynon says he laughed when he first heard the estimate. It takes hours upon hours to sort through the documents in the archives and his tribe’s own digitization efforts have been slow moving because of that.

“We tried pointing out to them how absurd that was,” he says. “It’s just not practical, not possible.”

Richard (Chalyee Éesh) Peterson, president of the Tlingit and Haida Indian Tribes of Alaska, says the same situation occurred in Alaska in 2014, when the National Archives building in the state was sold, and the records it once held were moved to Seattle’s facility.

Peterson says it was just as sudden. He hadn’t known about the move until after it had already happened.

“There was little to no warning, no consultation,” Peterson says.

At the time, Peterson says officials had promised two things:  that the documents would stay in Seattle and that the records would be digitized, allowing remote access. Neither promise has been fulfilled, he says. And now the situation seems to be repeating itself, with as little consultation as last time.

“That’s the problem here,” Peterson says. “No federal agency has even considered complying with the legal requirements to engage in tribal consultation.”

And even if the documents could be digitized quickly, Reynon says it wouldn’t be the same.

“With digitization, you just won’t get that same feeling [as you would] with the document in front of you,” he says. “You’re sitting there holding the document with the ink that your ancestor was holding the pen for. It’s indescribable, the emotional connection that you’re going to have with that document.”

The Public Buildings Reform Board has cited issues with the building itself as added reasons for the sale, saying it would save taxpayers money because the building needs costly repairs. Wooten says he understands that, and personally isn’t against a move if the records remain local. He says he and others could have suggested other solutions.

“Can we come up with a better solution? I think that’s all folks are asking for,” he says. “Unless you all talk together and work together for a solution, you’re going to have problems like this.”