Efforts to take down the missionary’s statue have resurfaced this year with a proposal to replace it with the renowned Nisqually activist. 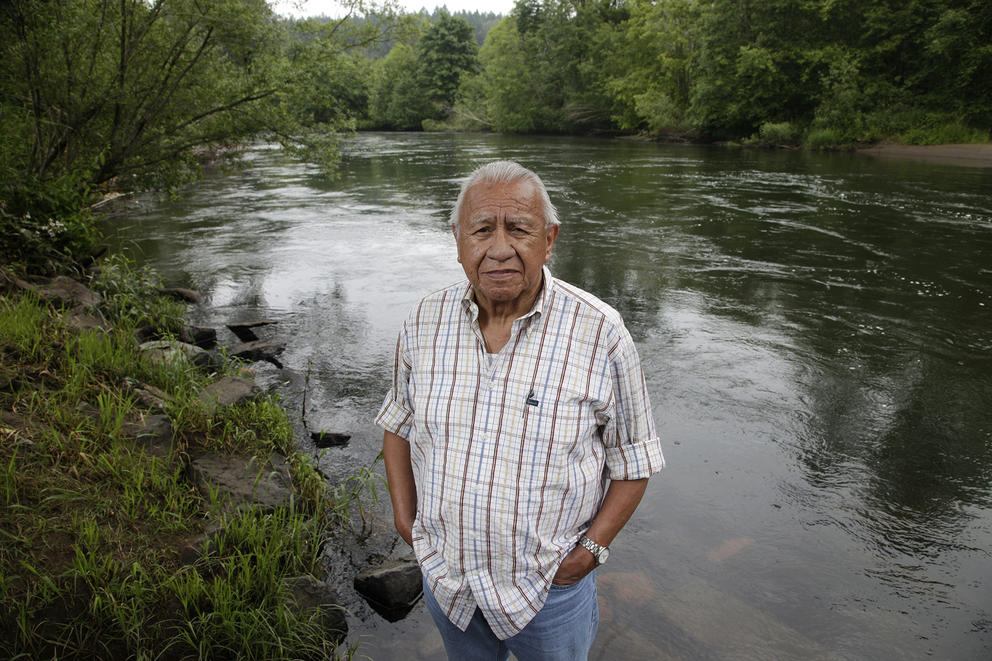 Billy Frank Jr., a Nisqually activist who was arrested dozens of times while trying to assert treaty-protected fishing rights during the Fish Wars of the 1960s and ’70s, died May 5, 2014. He was 83. (Ted S. Warren/AP)

Outside of the Native community, Billy Frank Jr. isn’t a household name — yet.

His son, Willie Frank III, says it’s about time. His activist father dedicated his life to furthering treaty rights and environmental protections. This work spanned decades and led to the Boldt decision — the landmark federal court ruling that dictates the relationship between tribes and state governments as it exists today.

“It still affects us today, the work that he did and the representations he built,” says Willie Frank, a Nisqually Tribal Council Member. “I don’t think people realize the seats at the table that our tribes have now.”

Frank remembers his father, who passed away in 2014, as a dedicated leader and the man who taught him at a young age about the importance of keeping up tradition. When Willie Frank was a kid, his father would often take him fishing at Frank’s Landing, a 6-acre patch of land by the Nisqually River that his grandfather bought in the early 1900s. In the ’60s, it was where his dad led “fish-in” protests, where tribal members fought for the government to recognize their tribal treaty rights to fish in traditional places, on or off reservation.

Frank keeps those lessons close, and passes them on to this day.

“It doesn’t matter if there’s fish or not — when it’s the season, you go and set the net regardless,” he says, recalling what his father told him. “As I get older, I realize that now, it’s not about the financial gain from fishing. It’s about exercising that treaty right and our way of life.”

On-and-off efforts to memorialize the Nisqually activist have bubbled up in recent years, with some tribes and school districts celebrating Billy Frank Jr. Day as a way to recall his legacy. This year, a state bill could make these efforts for recognition national.

The bill, sponsored by state Rep. Debra Lekanoff (Tlingit/Aleut), D-Bow, seeks to replace the statue of Pacific Northwest pioneer-missionary Marcus Whitman with one of Billy Frank Jr. in the National Statuary Hall in Washington, D.C. Each state can donate statues and memorialize two figures in the hall. Washington’s second statue depicts Mother Joseph, another missionary.

Proponents of the bill argue that the switch to usher in a figure who represents Washington’s contemporary history and Native peoples would be welcome. Lekanoff says that the Whitman statue is the older of the two statues; it was installed nearly 70 years ago.

“This is part of evolution, change, the natural progression in history of a voice that represents Washington state today,” Lekanoff says.

Whitman’s legacy touches all parts of the Pacific Northwest: He established an early outpost on the Oregon Trail near Walla Walla in the 1830s and established missions throughout Washington. Several schools, a county and even a national forest bear the Whitman name as a result.

“The name ‘Whitman’ is out there, throughout the Pacific Northwest,” says Robb Krehbiel, a Defenders of Wildlife representative who helped move the bill forward.

His legacy has also become associated with the destructive impacts of colonialism in recent years. Like other missionaries, Whitman sought to “save” Indigenous peoples of the region through religious conversion, attempting to make them live by Euro-American standards and promoting white settlement of the area. Krehbiel says that it’s important to remember the problematic pieces of Whitman's history, too.

“Yes, [Billy Frank Jr. is] known as an Indigenous rights leader, but he fought for everybody’s rights,” Krehbiel says. “I think that sending him as a new representation of Washington also sends a signal to everybody else in this state that we value everybody’s contributions.”

Past efforts to replace the Whitman statue have been unsuccessful. In 2019, state Sen. Reuven Carlyle, D-Seattle, proposed replacing the statue, reasoning that it did “not meet the standards of being one of our state's top honorees.” No formal replacement was proposed, although Billy Frank Jr. was suggested in conversations surrounding Carlyle's bill. This was quickly met with pushback during an initial legislative hearing in which opponents of the bill argued that taking down the Whitman statue would be tantamount to an erasure of his history.

The current bill focuses on how elevating Billy Frank Jr.’s name could add to a more inclusive retelling of the past. Lekanoff adds that the past year of protests, especially the wave of activism sparked last summer and new conversations around racial equity, may give this proposal enough momentum to succeed.

Willie Frank hopes that the statue brings more widespread attention to his father’s work. Even now, he says, many don’t understand the impact of his contributions towards environmental protections and recognizing tribal treaty rights.

“I don’t think people in Washington understand the significance of the Fish Wars,” he says. “For us, that was our Selma. That was our civil rights movement here.”

During the Fish Wars, when Billy Frank Jr. led “fish-in” protests, he was arrested over 50 times over perceived violations of state fishing law. These actions eventually led to the 1974 case United States v. Washington, commonly known as the Boldt decision. In his 1975 decision, Judge George Hugo Boldt affirmed tribal treaty rights to fish and established the co-manager status of natural resources that exists between treaty tribes and state government in the region today. Frank says it also opened the door for better communication between tribes and state government.

“Before Boldt, there were no solutions, there was no discussion,” Frank says. “It was all fight, fight, fight.”

Lekanoff says that she can testify to Billy Frank Jr.’s impact long after the Fish Wars. He was a well-respected activist known widely in Native communities, even outside of Washington. She saw this early in her career, when the two worked together to advocate for environmental protections.

The statue, Lekanoff hopes, will bring more recognition to his story — and to the history of Native activism as a whole.

“Our history hasn’t been told; our heroes haven’t been shared,” she says. “We have an opportunity to better tell the story of all people of color, and especially telling the rich story of the Native American people whose homelands we live in.”

Tribes are working together to vaccinate students

While the Pfizer vaccine has proven difficult to manage in the past, tribes are now collaborating as they attempt to get students vaccinated.

Maternal mortality rates are already much higher among Native people. The pandemic added another complication.