Judge rules national archives will stay in Seattle for now

With the support of dozens of tribes, a lawsuit successfully halted the sale of the national archives building last week. 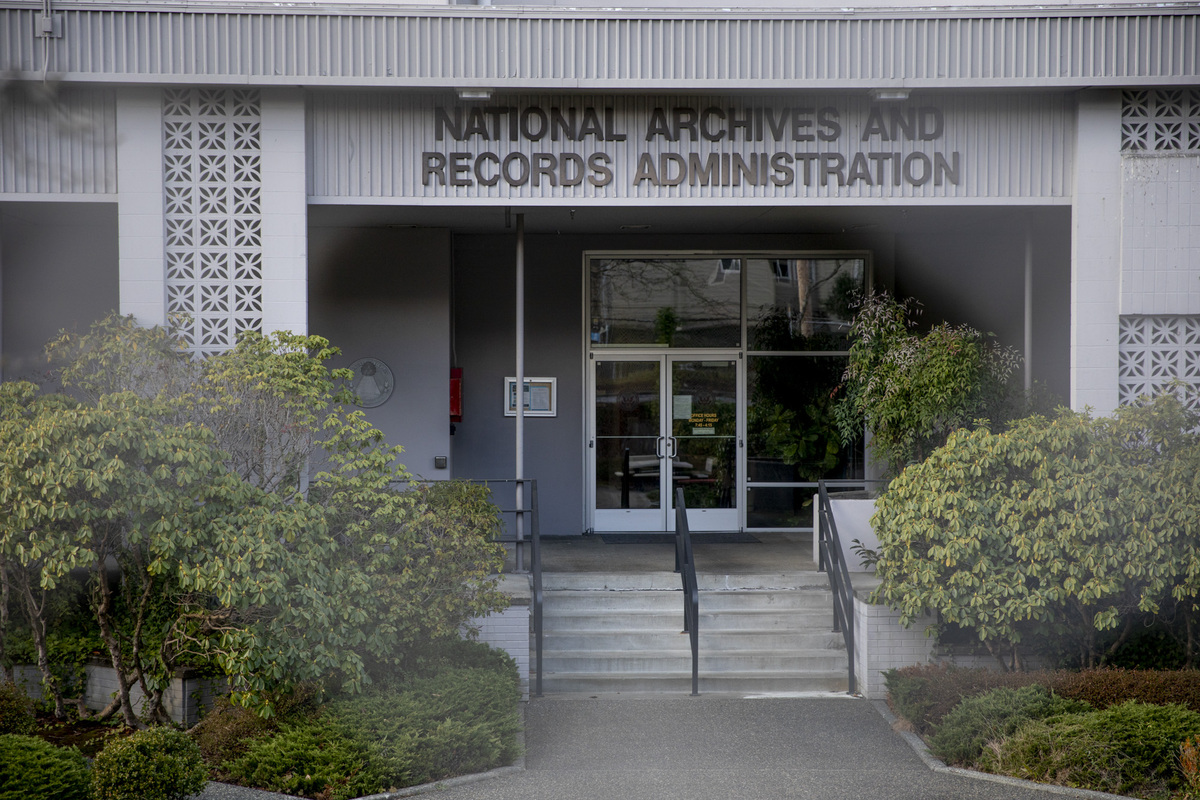 The National Archives and Records Administration building in Seattle on Jan. 25, 2021. (Dorothy Edwards/Crosscut)

The judge’s order halts the imminent sale of the building and removal of archival documents. A written order filed Tuesday morning details the decision, explaining that the federal government can’t move forward with the sale until the court issues an ultimate determination, which could be some time away.

“This was a gigantic victory,” says Brandon Reynon, the Puyallup Tribe of Indians’ historic preservation officer. “But we’ve still got a lot of work to do.”

The injunction was issued by U.S. District Judge John Coughenour, who last Friday chided the Public Buildings Reform Board, the federal entity behind the proposed sale. He described the situation as a “public relations disaster” that could have been avoided if the board had handled the case with more sensitivity.

Ferguson says this was a glaring issue he had with the sale from the beginning. He describes the rushed process as one that, at minimum, conveyed a level of obliviousness of a move's potential impact on tribes and the region.

“They just don’t have a clue, and they don’t seem to care, honestly,” Ferguson says. “Few things anger me more than that. They don’t know what they’re doing.”

The archives hold significance throughout the Pacific Northwest, containing the personal histories of many of the region’s communities. The documents and material are particularly important for tribes, many of which depend on the information held to inform everything from genealogical records to drafts of tribal treaties.

In the lawsuit, Ferguson argued that the building was ineligible for a rushed sale process in the first place, and that the federal government failed to complete the required step of consulting tribes during the process. Coughenour also referenced that on Friday, discussing the lack of communication with tribes and acknowledging that he “was unhappy with the way this entire process was handled,” according to Ferguson.

While the sale is paused, the judge’s order alone doesn’t stop the board from trying to sell the building again. Reynon says this is fine, as long as it’s done with tribal consultation. This could take a while, given that Seattle’s National Archives building serves at least 272 federally recognized tribes spread throughout its coverage area.

“Whether the building goes, stays, whatever, that’s not the point right now,” Reynon says. “Consultation needs to still take place, so we’ll be eagerly waiting for that consultation to take place as soon as possible.”

He adds that “the time that it takes is their fault. It’s their own rules, and we’re holding them accountable to their own rules that they are required to do.”

For tribes, the lack of consultation from the federal government isn’t a new issue. Tribes in Alaska faced this very same problem in 2014 when the state’s archives were moved to Seattle without warning. Reynon says it’s an issue impacting other projects within his tribe’s cultural resources department right now.

“This happens a lot,” he says. “We have three other projects right now where we’re in the same boat — it’s a thing we constantly deal with in [the tribe’s] cultural resources.”

Ferguson imagines that, once resolved, this lawsuit might pave the path for better consultation in the future and  prevent situations like this from repeating.

The fate of the Seattle-based collection of archives remains undecided. “The legal victory … helps buy time for our federal delegation and the federal government to find a permanent solution,” Ferguson says. “And that is going to be needed.”