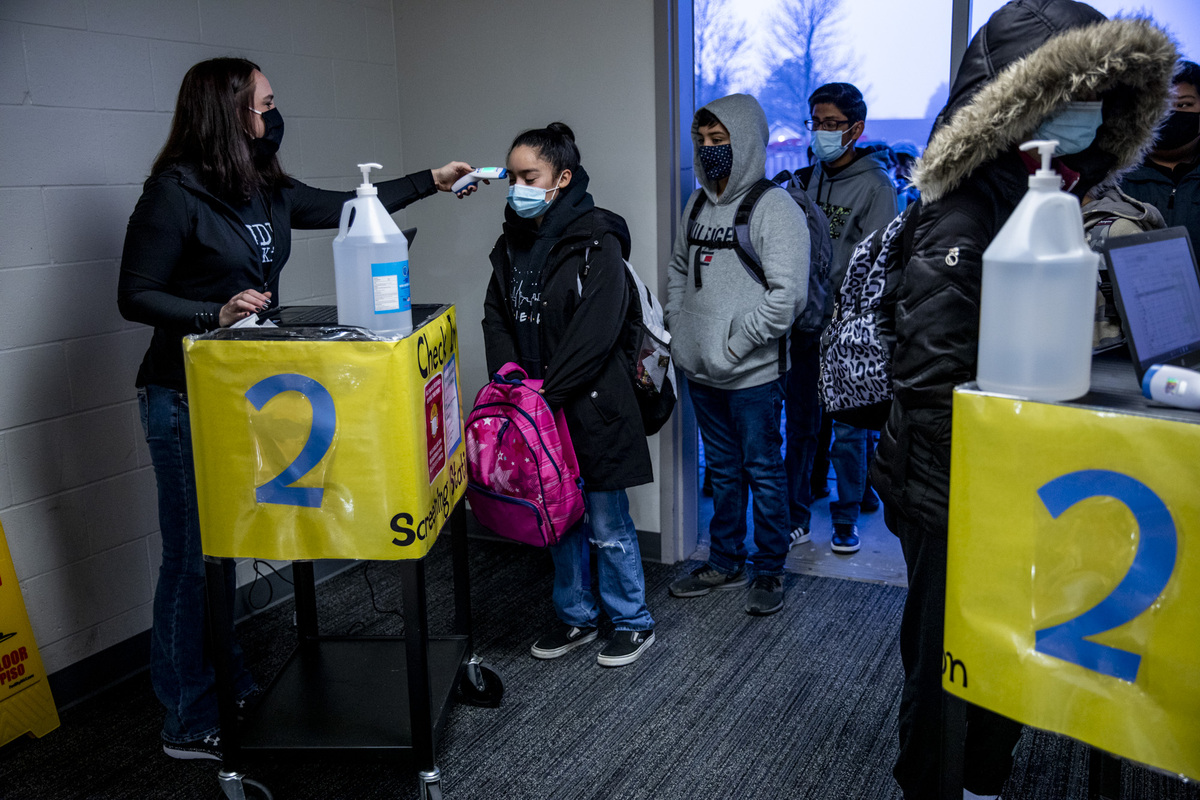 Students line up to check in before school starts at Chief Moses Middle School in the Moses Lake School District on Jan. 11, 2021. (Dorothy Edwards/Crosscut)

Alexandra Olin needs her 12-year-old son to go back to school. On the phone, Olin sounds exasperated, tired and fed up as she talks through her experience this past year.

Besides online learning being extremely sedentary, Olin says, children can’t be expected to sit online for hours and have perfect impulse control. She discovered her son, for example, was often “multitasking” last fall, with a video game open on one window and his remote class session open on another.

She has talked to her son about this and hopes the practice has stopped, but even parents in the same space have only so much control over their teens and preteens.

Desperate for answers among all the uncertainty about when her son could go back to school in person, Olin co-founded Reopen SPS, a Facebook group for Seattle Public School parents who want to send their kids back to class. The group had more than 1,000 members before it was shut down by Olin, who says the rhetoric became toxic.

Olin and her husband, who both work from home, are on one side of the debate triangle over school reopening plans during the pandemic. On the second side are teachers, staff and their unions, pushing for more safety precautions before in-person school begins. On the third side are school districts, encouraged by the state and Gov. Jay Inslee, who says it’s safe to send students back for in-person learning.

And in the middle of the triangle — and the people paying the ultimate price, Olin says — are Washington’s school-age children. 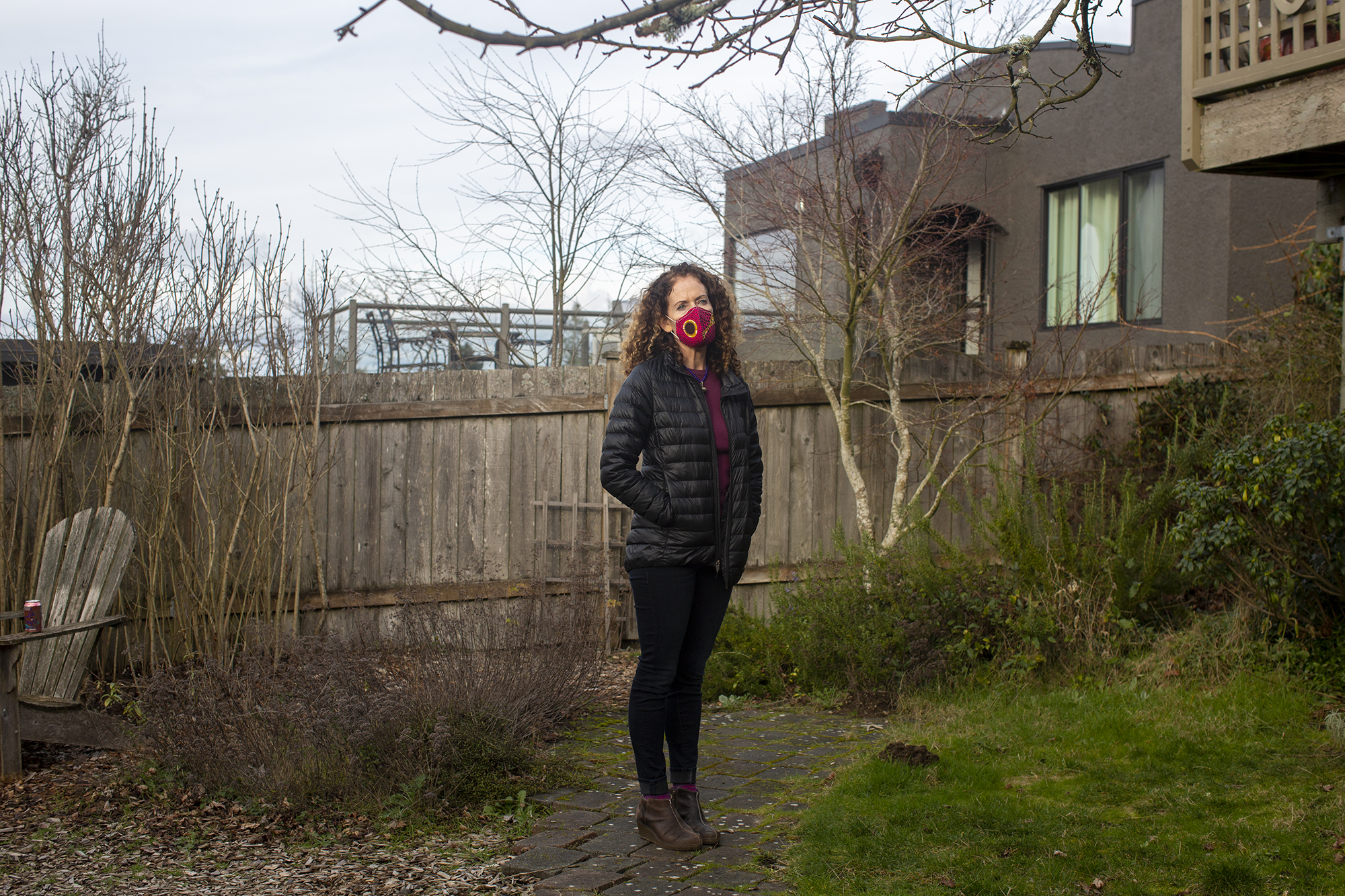 Alexandra Olin feels that teachers and school personnel should be prioritized for COVID-19 vaccinations, and a plan should be drafted to reopen schools as soon as possible. She worries about the district's ability to manage reopening as it faces union negotiations, a leadership change and a civil rights probe. (Shaminder Dulai/Crosscut)

Alexandra Olin feels that teachers and school personnel should be prioritized for COVID-19 vaccinations, and a plan should be drafted to reopen schools as soon as possible. She worries about the district's ability to manage reopening as it faces union negotiations, a leadership change and a civil rights probe. (Shaminder Dulai/Crosscut)

Seattle Public Schools, the state’s largest school district, plans to bring preschool, kindergarten and first grade students back on March 1 and wants to bring in the rest of students by fall, wrote district spokesperson Tim Robinson in an email.

But those plans hinge on coronavirus transmission rates, the school board and the teachers’ union, the Seattle Education Association, which has been in negotiations over a new contract with the district since June 2020.

Bringing in the youngest students first will help the district learn the best practices for in-person learning before bringing in the rest of the grade levels, Robinson wrote in the email. Of course, next steps are a lot more complicated than just putting a date on the calendar.

News reports and social media feeds have been crowded lately with demands by teachers in Seattle and elsewhere around the state and the country to be vaccinated before they step from behind the computer screen and back into the classroom.

Vaccine availability is something not even the governor can guarantee, but teachers are in one of the groups in line for vaccination in Washington state after the current groups — health care workers and everyone 65 and older.

Olin understands that teachers want to be safe and she wants them to be safe, too, but she says sometimes their demands come off as unreasonable. With teachers prioritized for the vaccines, Olin thinks the district should have a reopening plan for spring involving all grade levels.

Under Washington state’s vaccine plan, teachers and educators have been prioritized to get their shots during the spring and summer phase, but how quickly all teachers can be vaccinated depends on how many doses are available to the state.

According to Lacy Fehrenbach, the deputy secretary of health for COVID-19 response in the state Department of Health, supply is “very limited” right now.

Teachers and school staff are in the vaccine phase of frontline essential workers who work in congregate settings. But Washington has a lot of frontline workers and a lot of older citizens who will be standing in line along with teachers to get their vaccines, Fehrenbach says. “We are hoping we can get teachers vaccinated soon,” she says.

This past Friday, The Washington state Office of Superintendent of Public Instruction announced its “Get Ready” plan, which will establish up to 20 vaccination sites along Interstate 5. The sites aim to vaccinate up to 80% of all school employees. The plan says educators and staff would be eligible after 50% of the people in the first phases — health care workers, nursing home residents and workers, people 65 and older and those who live multigeneration homes — have been vaccinated.

As of last week, more than 616,000 doses of the COVID vaccines had been given to Washington people. The state estimates there are about 500,000 people in the first phase and as many of 1 million in the 65 and older group, so getting to the next phase is going to take a while, but probably not until this summer.

Fehrenbach says school transmissions are not common and that “religious adherence” to the health measures put in place, such as mask wearing, social distancing, ventilation and prior student testing, have shown schools are generally safe environments.

Last week, the Centers for Disease Control and Prevention  concluded in a peer-reviewed report that schools do not contribute significantly to the transmission of COVID-19. But numerous school coronavirus outbreaks were also reported in January, almost simultaneous with the CDC report: including 10 new school outbreaks in New Jersey, and 29 school outbreaks in Michigan. As the Poynter newsletter on covering the pandemic points out, the science around school reopenings is not settled.

“I would push back on quite a bit of that research,” said Washington Education Association President Larry Delaney. “One of the concerns we have as a union is there hasn’t been any sort of standardized process for collecting data and information.”

Delaney notes there is no central data collection agency, either at a national or state level, that can say definitively, based on data, that it is safe — or not — to reopen schools. “The data we see is very anecdotal and very spotty,” he said.

Teachers and unions continue to push for rigorous safety protocols. The Bellevue Education Association, for example, was sued by the Bellevue School District earlier this month after teachers refused to return to instruct their second grade students in person before the teachers were fully vaccinated. The district didn’t proceed with the injunction after a King County Superior Court ex-parte commissioner rejected the district’s request. The union and district did reach an agreement early last week to reopen school for K-2 students.

“We want to do what’s best for our county and the families and communities we serve,” said Kyle Reimgarten, a second grade teacher in the Bellevue School District during a Zoom press conference following the injunction. “We do not want to contribute to overwhelming the hospitals.”

The Bellevue district superintendent, Ivan Duran, said the injunction was not at all how he wanted things to turn out, but stressed that Bellevue school buildings were ready for students and that he believed the science pointed toward schools being safe.

Rebecca Schaechter, a mother of four with two elementary-age students in the Bellevue district calls this an “impossible situation.”

“I think everyone has really good intentions and are trying to do the best thing…. When I look at the data to bring back the youngest kids, I think it could be done safely,” she posits, adding “but data doesn’t tell individual stories and if I were a teacher would I want to walk back into a classroom if in another month or two all teachers could be vaccinated? Why shouldn’t we wait?”

She and her husband both work from home and are grateful that they and their kids are managing, but says they know that isn’t the story for everyone. She worries about students in foster care or those who may not be as well resourced as her own family.

More than 100 school districts across the state are already offering some kind of in-person instruction in at least some grade levels. But most of the state’s school districts, like Seattle Public Schools, are still trying to figure out their reopening plans.

For parents like Olin, who say remote education is taking the fun out of learning and leading down a slippery slope toward excessive screen time, in-person learning can’t come soon enough. She worries about the district's ability to manage reopening as it faces union negotiations, a leadership change and a civil rights probe.

“I’m frustrated and I don’t know where exactly the truth lies,” she says. “There’s no captain of this ship, there’s no one running it and our kids are caught in the middle and it’s not OK.”