A federally appointed monitor is raising questions about the council’s budget decisions. 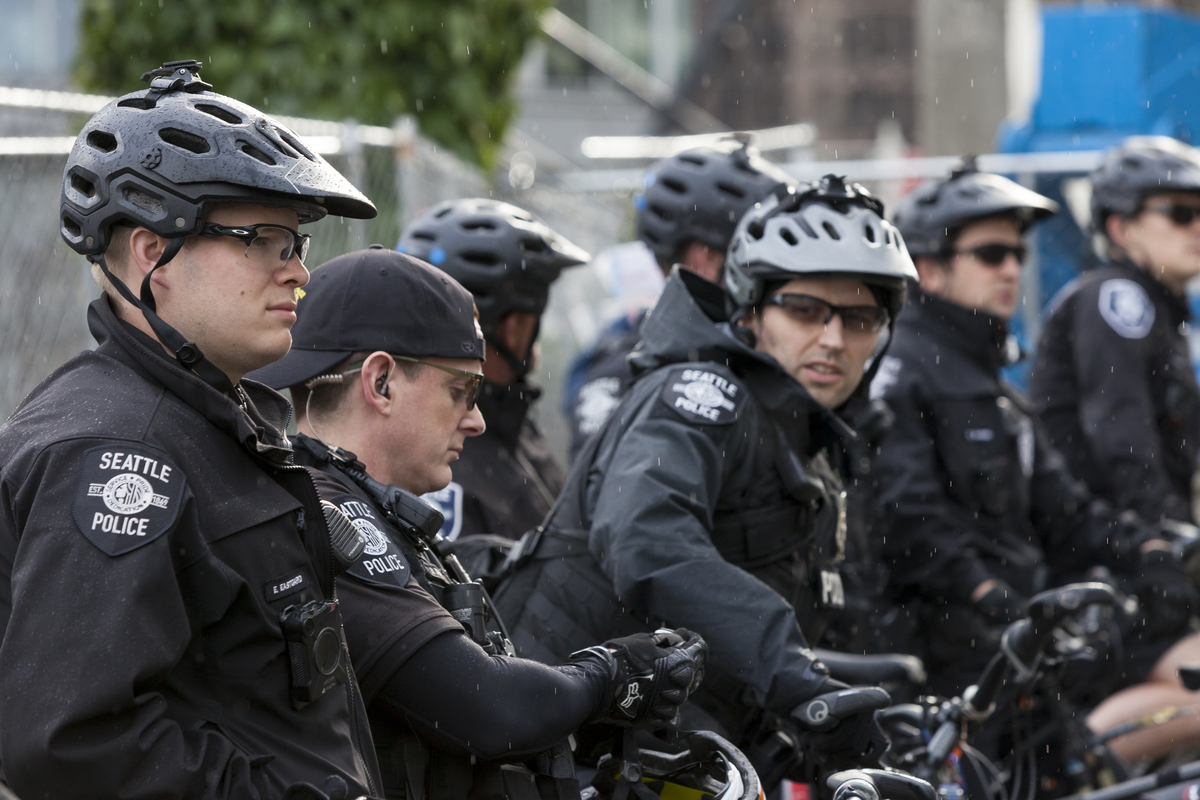 Seattle police officers observe protesters gathered in Bellevue, May 25, 2019. The Seattle City Council has indicated it is backing off from plans for deep cuts to the Seattle Police Department, a pledge it made last year during budgeting. (Paul Christian Gordon for Crosscut)

A Seattle City Council committee backed down Tuesday from a blunt $5.4 million cut to the Seattle Police Department, signaling a willingness on the part of some council members to take a slower approach in their stated goal of reducing the overall law enforcement budget.

Rather than an across-the-board cut, the committee voted  3-2 to cut just $3 million, which would be allocated to community organizations at a later date and also redirected into other city departments.

The council also identified roughly $5 million in salary savings that the police department may use to fill civilian positions, hire more mental health providers who would respond with officers, bolster the response to public disclosure requests, expand evidence storage and pay out money owed to officers leaving on their own accord. The money would not go directly toward hiring more patrol officers.

Combined, the cuts and earmarks equal about $7.7 million, which is how much the police department is projected to save on salaries after a record number of resignations in 2020 and 2021.

“Depending on where you sit, this bill has something that everybody has been asking for,” said Councilmember Lisa Herbold, who introduced the changes to the department’s budget.

The proposal, which so far is not scheduled for final passage before the full council, is part of ongoing and tense debates over the future of policing in Seattle and the best way to realize those changes. Tuesday’s vote came over sharp objections from some residents and members of the council, who urged the city’s legislative body to pass the originally proposed $5.4 million cut to the department.

“To reduce SPD’s budget by anything less than the original $5.4 [million] commitment from every single council member will send a direct message to SPD that there will continue to be no consequences for their reprehensible actions,” said Jacob Schear, an organizer with Real Change.

The council in recent weeks has heard dire warnings from officials with the police department and the mayor’s office about the possible impacts of budget cuts. The department has seen a record number of departures recently — 186 in 2020 — most of whom have not been replaced because of hiring freezes across the city. Interim Police Chief Adrian Diaz called the shrinking staff levels a “crisis” that would lead to longer 911 response times and fewer resources for investigations.

At the same time, the council’s budget actions are facing increased scrutiny from an independent monitor, Antonio Oftelie, who was appointed as part of the nearly decade-old federal oversight of the Seattle Police Department. In a letter Monday, Oftelie questioned how further cuts to the police would impact the department’s ability to respond to 911 calls and asked for more details about how the city planned to supplant law enforcement with community alternatives.

The fight over the $5.4 million began in 2020, when Police Department officials came to the council for money to cover its busted overtime budget, the result of the massive summer protests. The council agreed, but on the condition that they would consider cutting the same amount from the 2021 budget.

The council’s proposed budget reduction this year would represent a recapturing of money that the Police Department is no longer slated to spend on salaries, thanks to the large reduction in staffing.

But in the lead-up to Tuesday’s vote, representatives from both the Police Department and mayor’s office urged the council to direct those salary savings back into the department.

“Patrol and 911 response challenges have emerged in pretty much every precinct, and the cascading impacts of Chief Diaz needing to redeploy officers and mitigate for 911 response has negatively impacted other units, bureaus including investigations, training, civilian crime prevention and community service support, all of which also jeopardize our compliance with elements of the federal consent decree,” Deputy Mayor Mike Fong told the council earlier this month.

Activists, meanwhile, kept the pressure on the council. They argued that reneging on the council’s promise to make further cuts would embolden the SPD to continue to overspend without consequence.

In the wake of the summer’s protests, a majority of the Seattle City Council pledged a total rebuild of the city’s public safety responses, including cuts to the police of up to 50%. But the fight over the $5.4 million is a microcosm of how precarious those promises have become.

Herbold said her goal in proposing smaller cuts was to continue moving toward reinvestment of law enforcement dollars while also giving the department what it said it needed to mitigate some of the impacts of a shrinking workforce.

Councilmember Tammy Morales, however, said that if the department felt it needed to spend more on public disclosure or evidence storage, it should have prioritized its 2020 budget that way. Instead, “the department chose to prioritize its budget on overspending its overtime pay,” she said.

Complicating things is the federal oversight of the Seattle Police Department. The federal judge overseeing that work — intended to reform training and reduce uses of force — has begun to express concerns that the council’s cuts could interfere in the ongoing work of building a constitutional police force.

“You have a lot of leeway in where you go, but you can’t simply charge off in a direction without knowing what the consequences are, and having in place plans to replace essential services currently being provided by the police,” U.S. District Judge James Robart told the city in a February court hearing.

Those concerns were reflected in Oftelie’s letter earlier this week. He had10 questions for the city to answer, including how the department planned to sustain its daily services, how investigations are expected to proceed with reduced staffing and how the proposed cuts might clash with the goals of the federal oversight agreement.

“The Monitoring Team asks that these questions be answered as expeditiously as possible, and prior to further actions by the City on the budget of the Seattle Police Department,” Oftelie wrote.

It’s unclear when the budget action would go before the full council. Herbold said the city will first seek guidance from the Department of Justice and Oftelie on how the changes will or will not conflict with its obligations under its federal oversight agreement.