The city council approved a ‘right to counsel’ law on Monday, meaning all qualifying tenants facing eviction will be given legal representation. 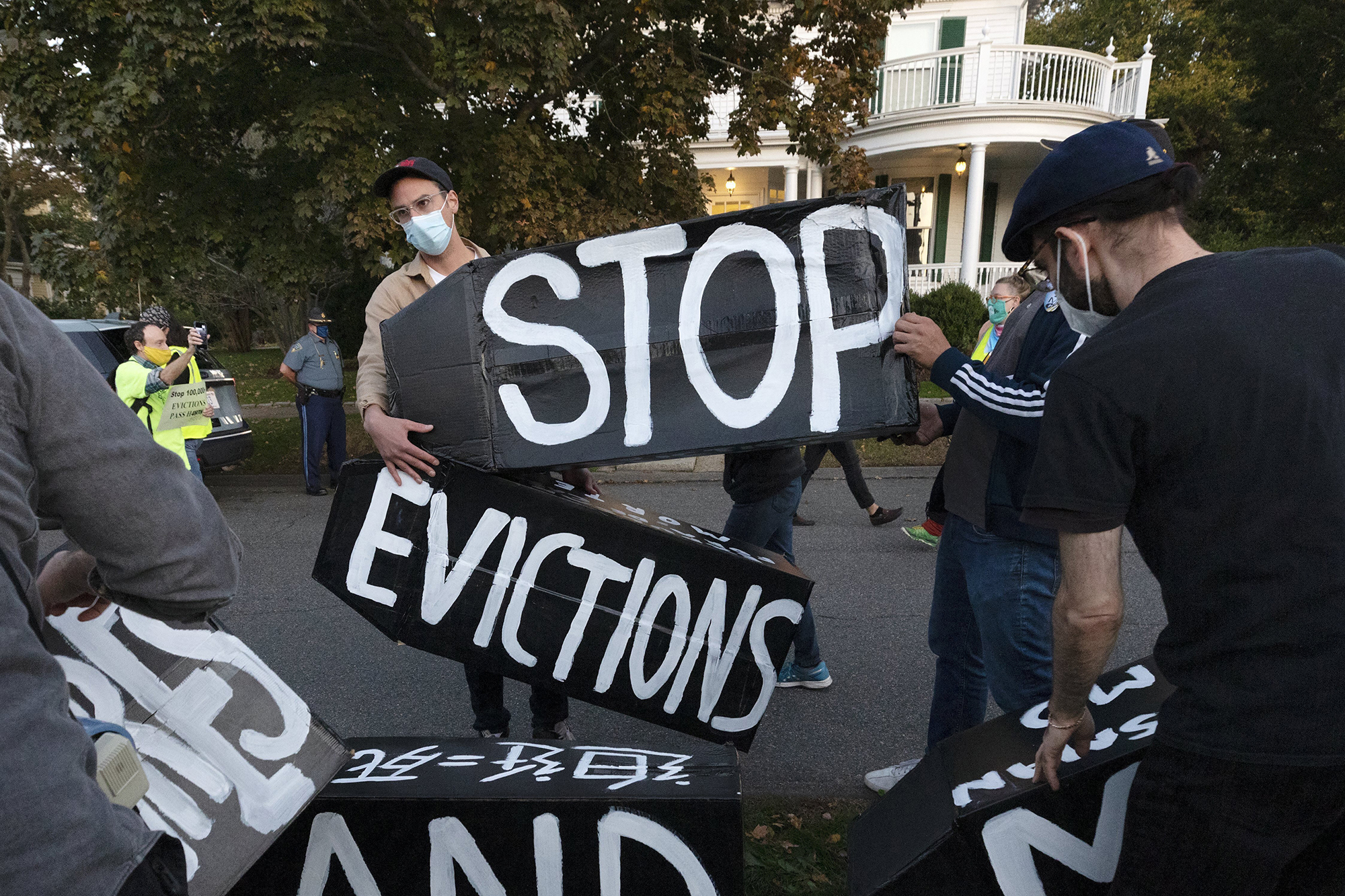 In this Oct. 14, 2020, file photo, housing activists erect a sign in front of Massachusetts Gov. Charlie Baker's house in Swampscott. The Justice Department said Feb. 27, 2021, that it will appeal a judge’s ruling that found the federal government’s eviction moratorium was unconstitutional.(Michael Dwyer/AP)

In passing the measure, members of the council hope to keep as many people in their current homes as possible and avoid the devastating and expensive downstream consequences — including homelessness — that often follow when someone is forcibly removed from where they live.

"This legislation will not enough be itself and we know that we need a lot more," said Councilmember Kshama Sawant, who originally proposed the legislation. "We know that eviction destroys communities, wrecks households and even kills."

The vote was originally slated to occur two weeks ago, but was delayed after several council members expressed a desire to review the measure more before voting. Some of its urgency evaporated as well — hours earlier, Mayor Jenny Durkan announced she was extending the city’s moratorium on evictions through the end of June.

The new right-to-counsel law, which the council estimates will cost $750,000, comes as fears of pandemic-driven evictions loom, even as local governments anticipate an influx of rental assistance from state and federal coffers.

Seattle joins other cities around the country that guarantee attorneys to renters, including New York, San Francisco and Philadelphia.

When it comes to eviction court, renters face a “staggering imbalance” in which powerful law firms represent landlords against renters with limited to no help, Sawant said. By offering counsel to all tenants who accept, the city is trying to even that imbalance.

“In cities that have enacted Right to Counsel legislation, such as San Francisco and New York, evictions have plummeted and the number of eviction filings has also fallen, with corporate landlords knowing they have to face a trained attorney, not a vulnerable tenant,” Sawant said.

In a normal year, King County sees between 5,000 and 6,000 evictions a year. That number was much lower in 2020 due to local, state and national eviction moratoriums. But Sawant warned of a "tsunami" of evictions that could follow the end of those moratoriums.

But expanding those services to guarantee counsel to all renters will cost more. In the council’s bill, the city expects to spend an additional $750,000, although the source of those funds have not been identified. Sawant said that number could fluctuate depending on circumstances — if the moratoriums against eviction are extended further, it would be much lower; if aid isn’t distributed quickly enough, possibly higher.

"It’s an absolute pittance compared to what local and state governments have to bear when people become homeless," Sawant said in an interview Friday.

One point of debate leading into its passage was whether renters should be asked to qualify for the free services. Councilmember Debora Juarez questioned whether it makes sense to offer free counsel to everyone. "Does this mean if I make $100,000 a year and I decide to quit paying my rent in August that i don’t have to pay it anymore, and the city gives me a lawyer and picks up the fee?" she said during a council briefing earlier this month.

Council President Lorena González proposed an amendment Monday that would limit the services to those who qualify as indigent — or too poor to afford their own attorney — which is a similar bar as those who are offered public defenders.

González said she offered the amendment in part on advice from the city's lawyers, who said adding the indigent qualifier would make the law stronger in court while still providing attorneys to those who need them. By limiting access to low-income people, Councilmember Debora Juarez said the city is providing an essential service and cannot be accused of making an illegal public gift of funds. Renters would only need to sign a form saying they could not afford a lawyer. In places that already offer counsel, nearly everyone who accesses eviction attorneys are low-income people.

"We are not talking about a process by which a tenant is going to have to present a mountain full of paperwork in order to prove they are indigent," said González.

Sawant rejected the amendment as, what she called, a means test, which she said would create barriers to access even for those who qualify. "Council members might not want to call it means testing — you can call it happy joy testing if you want— but it is still means testing in reality," she said. "It is asking people to jump through some kind of hoop before they qualify."

The council adopted González's amendment in an 8-1 vote.

Evidence in Seattle and in cities that previously guaranteed counsel suggests that tenants are less likely to be removed from their homes when they have a lawyer by their side. According to data from the Housing Justice Project, in 2017, 23.4% of tenants with an attorney avoided eviction, compared with 14.6% of those without. By 2019, over half of Housing Justice Project’s clients avoided eviction as rental assistance became more available. In San Francisco, two-thirds of tenants with an attorney stayed in their homes.

Edmund Witter, who manages the Housing Justice Project, said he previously did not see right to counsel as a priority, in part because the legal framework and financial aid were both lacking, leaving attorneys little to work with. But recent changes to the state’s law governing landlord-tenant relations, combined with a new funding source from the United Way of King County, have provided attorneys with new tools to fight eviction.

“I think this is the right time to do it, especially if we’re going to see a lot of evictions coming down the road,” Witter said.

An attorney’s role in keeping people in their homes is often less about brilliant legal maneuvering, he said, but more about ushering people toward resources that they might not otherwise know about. Nine of 10 eviction cases result from a lack of payment; having an attorney’s help is often all it takes.

“There are a lot of resources out there,” Witter said. “A lot of what we need attorneys do is to help tenants actually access that program and not get evicted in the process.”

In fact, landlord groups also support the move toward a right to counsel, in part for this very reason. Brett Waller, director of government affairs at the ‎Washington Multi-Family Housing Association, said that, given the choice, he’d prefer the city spend money on direct rental assistance over attorneys. But he said it’s good for tenants to have legal representation so that conflicts might be worked out directly.

“Reaching an agreement between two people is always better than having someone else make a decision for you, which is what happens when you go before a judge,” he said.

If a tenant can more easily access rental assistance, that’s much preferred to an eviction, which can cost a landlord up to $8,000, Waller said.

As to the cost of the program, that’s still something of a question mark. In King County, there are between 4,000 and 5,000 evictions per year, a disproportionate number of which involve residents who are Black, Indigenuous or people of color, according to work by University of Washington researcher Tim Thomas.

But the pandemic has complicated the formula. Very few evictions happened in 2020 because of the moratoriums in place; 2021 could see a wave if the safety net isn’t strong enough, or lower numbers if moratoriums are extended or there’s enough rental assistance.

San Francisco is budgeting more than $10 million this year toward its right-to-counsel program, spurring fears that Seattle’s estimates are far too low. However, Witter said the comparison isn’t a good one, because San Francisco has more tenant laws, as well as jury trials for renters facing eviction.

Witter said that the Housing Justice Project has been able to provide a large number of services on a small budget for years. On average, it costs about $400 to provide legal representation to households facing eviction, and the average amount provided in assistance is between $1,500 and $2,000. Witter said he’s confident in what his office could do with $750,000.

One gap in the right-to-counsel proposal: tenants who do not show up to their own eviction proceedings, which is routinely more than half and sometimes as high as 60%, said Witter. Sawant said she’s examining follow-up legislation to address these so-called “default evictions.”

State lawmakers are also considering a right-to-counsel law, alongside requirements that landlords offer payment plans for tenants behind on rent. Senate Bill 5160 passed the Senate earlier this month and is being considered in a House committee.