What WA can learn from Native communities’ vaccination plan

The Seattle Indian Health Board, which has been vaccinating Seattle teachers and those over 50 for a while now, shares why some of its strategies have been so successful. 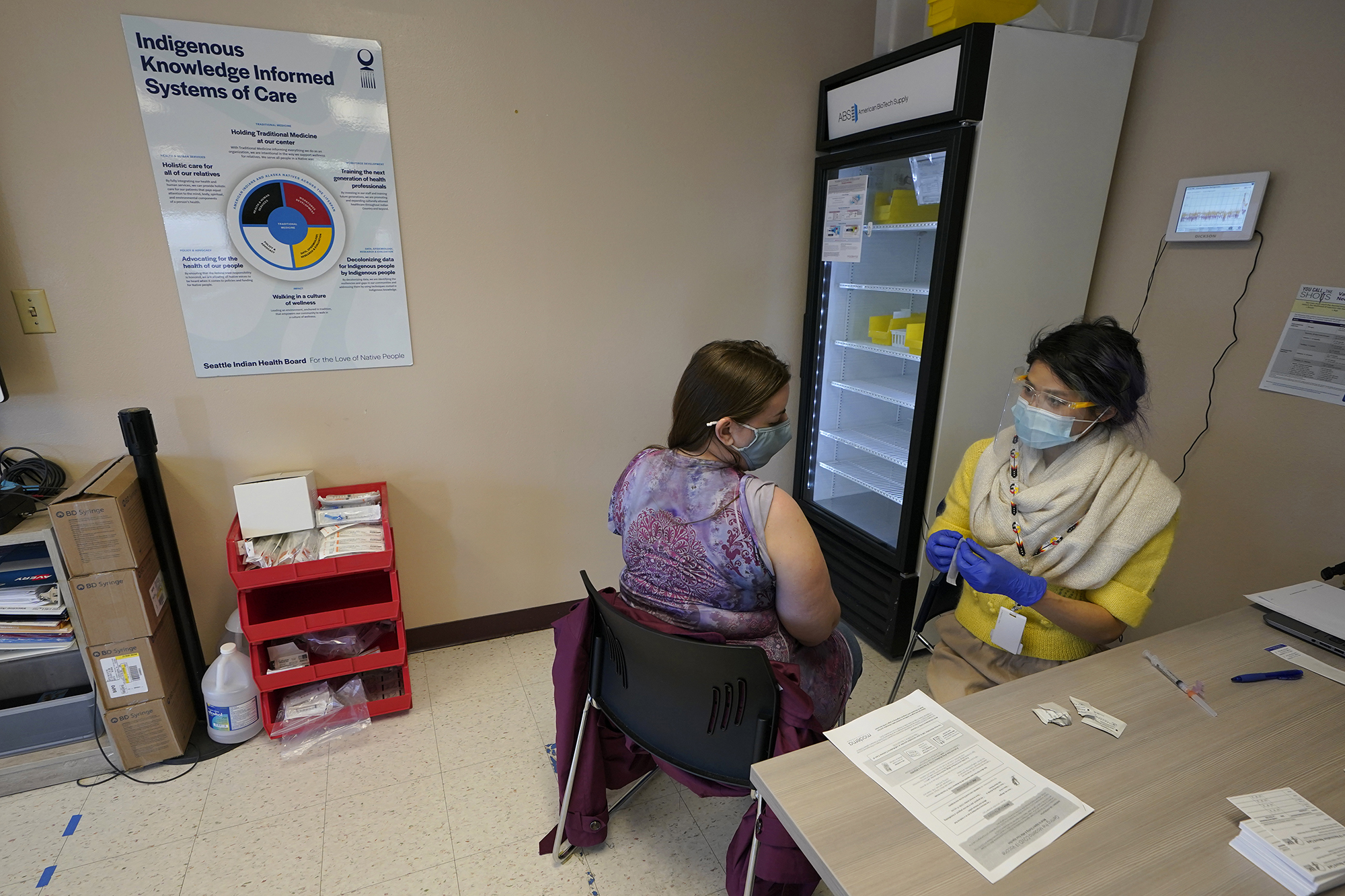 Rachel Becker, left, a payroll specialist with Seattle Public Schools, talks with Kim Vo, right, a pharmacist working with the Seattle Indian Health Board, March 15, 2021, after Becker received her first dose of the Moderna COVID-19 vaccine at an SIHB clinic in Seattle. On Monday, the SIHB began vaccinating frontline staff from Seattle Public Schools, including substitute teachers, custodians, nutrition services staff, special education teachers and instructional aides. That came after determining the health board had enough doses of the vaccine to share with school workers. (Ted S. Warren/AP)

Throughout the country, tribes have proven to be among the most effective in getting vaccinations out to their membership. They've been enough ahead of the curve that they, in many cases, have started offering vaccines to large swaths of people beyond their communities. Juneau, who is a descendent of the Blackfeet Tribe, saw the same in her own community in Browning, Montana, which has opened vaccinations to people 18 or older after more than half of tribal membership had been vaccinated.

“It’s something they don’t have to do, but they’re really stepping up to make sure our communities are safe,” Juneau says.

Many tribes and eligible Native-led organizations throughout the country, including those in Washington, receive vaccine allotments from the Indian Health Service. As sovereign nations, they’re unique in their ability to dole out vaccines as they see fit outside of state mandates. This, Juneau hoped, would allow Seattle school faculty to receive them more quickly. She reached out in early February to the Seattle Indian Health Board, a community health center specializing in care for Native people.

“She understood right away that, as we're returning students to school, that there was a community need,” says Juneau of her conversations with SIHB CEO Esther Lucero (Dinè).

On Monday, March 15, 155 Seattle Public Schools staff arrived at the SIHB to receive their first dose of the Moderna vaccine, with the intention to continue vaccinating SPS staff throughout the month.

Among the SIHB’s first priorities for vaccination were elders, Native language speakers and other keepers of culture. On Feb. 1, the board opened up the vaccinations to more people, including people 50 years old or above.

Lucero says the authority to make decisions like these has allowed SIHB to take a strategic, community-based approach. These methods often contrast with the state’s approach, which she says she has found “incredibly frustrating.”

“They just kind of put the onus on the individual to be able to find a way to access the vaccine,” Lucero says. “Meanwhile, we have limited supply in the community already.”

It’s difficult for the people who need the vaccines most to access them, Lucero says. With that in mind, the SIHB has worked to distribute vaccines by contacting eligible people directly, often calling the patients they service and letting them know where and how they can receive the vaccine. They’ve also taken the vaccines to people in person, including vaccinating residents of Eagle Village, a transitional housing development for homeless Native people and bringing vaccines to Chief Seattle Club members currently housed in hotels.

This community-based approach is one that goes deeper than simply strategy at the SIHB, Lucero says. For Indigenous people, she says, a community-first approach is often a guiding value, reflected in the strategies that many tribes have taken in their vaccination rollouts — and in the attitudes of Native people themselves.

“It’s part of our community to vaccinate our teachers to keep our children safe — that’s just how we think,” Lucero says. “We’re used to working in community. Indigenous leadership is different.”

Similarly, tribes throughout Washington have taken this approach and offered vaccines to people outside of tribal membership and staff, focusing particularly on school district staff. For the Lummi Nation, that meant vaccinating teachers in the Ferndale School District starting in late February, before teachers were prioritized by the state.

Dakota Lane, the Lummi Nation’s health director, says that it made sense for the tribe because the district serves about 900 tribal students.

“It was a clear benefit to the Lummi community to help the school district feel protected,” he says.

The tribe has also vaccinated school bus drivers, local grocery store employees and the families of emergency medical service providers.  Lane added that the tribe plans to vaccinate, among others, Lummi Island ferry crew members — people who may not have otherwise received vaccinations until much later by organizations tthat followed state guidelines.

“Basically, wherever Lummis go, we want to offer protection,” he says.

At times, these decisions have been polarizing. Lane has heard complaints from non-Native community members following these decisions and received a couple calls chastising the tribe for “going against state guidelines.” He says this often stems from a misunderstanding of tribal authority, and he has frequently explained that tribes have the right to give out their vaccines as they see fit. The Lummi Nation, Lane says, has tried to make decisions based on community need and the best medical advice available.

“The more people that are vaccinated, the safer we are in our surrounding community,” he says. “That’s the philosophy that [tribal] council and us have taken.”

And this method has proved successful: By Feb. 5, 37% of patients who use the Lummi Tribal Health Center were vaccinated.

Lucero says that examples like these illustrate how tribes and Native community organizations like the SIHB have been uniquely able to address community need in their decision making — something she hopes she sees in the state’s rollout moving forward.

“What I’d like to see in the future is more strategic planning related to vaccine distribution,” she says. Or at the very least, she says: “I would like for government systems to recognize that if you get us the supply and the resources and get out of the way, we do a good job.”