This year’s mayoral and city council races will be voters’ first referendum on policing in Seattle. 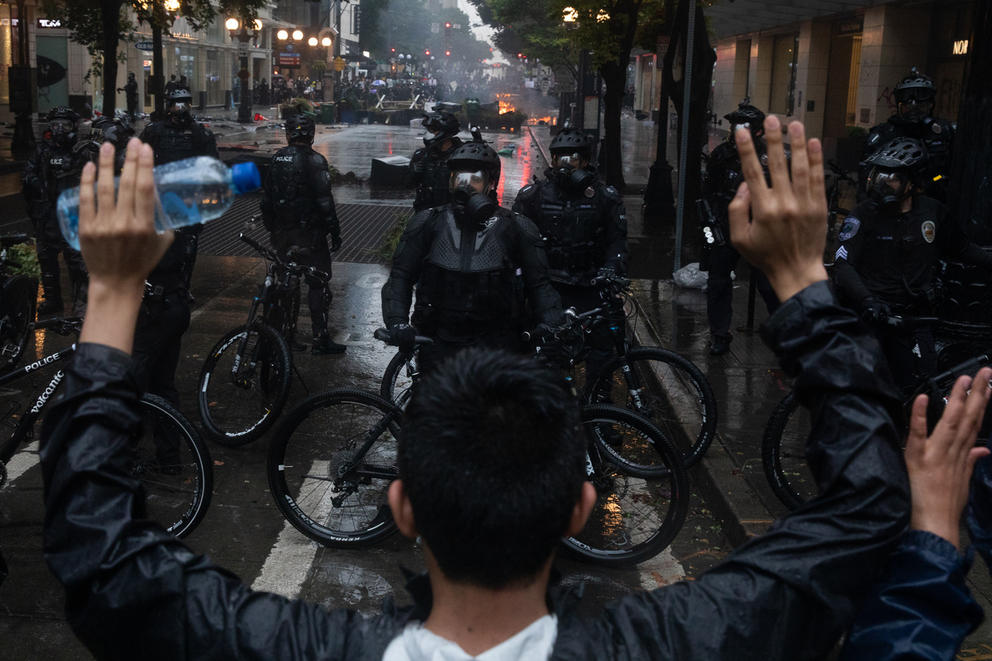 A demonstrator raises his hands in the air while exclaiming “Hands Up, Don't Shoot” during protests across downtown Seattle, May 30, 2020. A wave of protests swept across the U.S. following the death of George Floyd. Police Officer Derek Chauvin of the Minneapolis Police Department has been charged with murder in Floyd's killing. (Matt M. McKnight/Crosscut)

Seattle’s 2019 election was a referendum on many things — homelessness, housing, taxation, corporate influence — but policing was not on the list.

One month before voters cast their ballots in 2019 for seven of nine seats on the Seattle City Council, just 10% of registered voters said the police department was their top issue, while 70% named homelessness or housing, according to a Crosscut/Elway Poll at the time.

But while the current council may not have been elected with an eye toward policing, the summer’s protests made it one of the defining issues. The legislative body became the face of the “defund” movement locally and nationally, as a majority of members pledged cuts of up to 50% of the Seattle Police Department budget.

This November, Seattle voters will choose their next mayor, two city council members and the city attorney. It will be the first time City Hall’s pledges to reimagine or even defund the police will be on the ballot.

All of the positions up for election this November are citywide representatives — unlike 2019, when they were all district-based. That means the slate of politicians swept into power will offer the clearest picture of where the public stands on policing.

It’s the Goldilocks election: Has City Hall gone too far, not far enough or just right?

Every candidate has pledged to improve public safety and policing in Seattle. But when it comes to the department’s budget and the speed with which the current systems ought to change, voters are left with a spectrum of choices.

When Nikkita Oliver ran for mayor in 2017, they did so on a platform of cutting police budgets. Oliver had gone on record as an abolitionist — a stance cast as radical at the time. Oliver’s campaign gained traction, but they still fell short in the primary.

Oliver is running for city council this time, seeking to replace Council President Lorena González, on an explicitly abolitionist platform. This is not a change for Oliver. But the world itself has changed in the years since 2017; “defund the police,” while still hotly controversial, is suddenly a widely used and better understood term.

“I think I’ve always been very transparently abolitionist,” Oliver said. “What is beautiful about the time that we’re in is that people are willing to engage that conversation more holistically, to think about  — what does it mean to create the conditions to render policing obsolete?”

Oliver will not be alone in running an abolitionist campaign. Andrew Grant Houston, an architect and interim policy adviser to Councilmember Teresa Mosqueda, is running for mayor on clear calls to drastically cut police funding. But while Oliver has held abolitionist views for years, Grant Houston is more representative of the mainstreaming of those beliefs. He came to the conclusion that police budgets ought to be reduced after watching the summer’s protests and “seeing the development of the conversation, both from the side of the protests and the protesters and the development of systems and support of mutual aid,” he said.

While Oliver and Grant Houston carry the torch of dismantling the police, other candidates present themselves as clear alternatives against calls to defund them.

“I don’t use the narrative ‘defund the police’ because my goal is to make the department effective and efficient and masters of de-escalation and they will need resources to be able to achieve that,” said Bruce Harrell, the former Seattle council president who is running for mayor.

The changes Harrell calls for are largely ones that would occur within the system as it exists now — better de-escalation training and oversight, primarily. There are overlaps between his message and those who support defunding the police, primarily as it relates to alternative responses to people in mental health crises. But he’s largely uninterested in conversations around a wholesale dismantling of the Police Department.

“I think a smarter question is, is the response the most effective response to get the desired outcome?” he said. “Did we use the best practices relative to de-escalation?”

Among skeptics of the calls to defund the police, Harrell is joined by Sara Nelson, who is competing against Oliver for the seat on the city council. Like Harrell, Nelson’s position is that improving policing means giving it more money.

“Defunding the police without a plan and without broad consensus in the Black community is the wrong approach,” she said in a policy statement, “because good policing takes more money for anti-bias and de-escalation training and adequately funding effective community policing, a model proven nationally to ensure that our officers are responsive to the people and businesses they’re supposed to protect.”

For a host of candidates on the ballot, their platforms are somewhere in between — a bet that most voters want systemic changes, but may shy away from the abolitionist label. Council President González is not using the term “defund the police” very often in her mayoral campaign, but she said, “I continue to believe that there are better ways to prevent crime from happening in the city than hiring a thousand new officers.”

Her current aide and candidate to fill the open council seat, Brianna Thomas, worked for many years on some of the more incremental legislation to increase accountability of officers. Thomas said she acknowledges that people feel those reforms have come up short and that it’s worth widening the lens to what officers should be doing at all.

Jessyn Farrell, who’s running for mayor, said Seattle needs to be “redefining what public safety means,” but also said there are certain functions — such as response to domestic violence and gun seizures — that the police ought to keep doing.

Polling on where the public stands on the direction of policing is mixed. The Crosscut/Elway Poll last year found the vast majority of voters against a blunt 50% cut. But when asked whether they’d support moving money out of the police department to pay for more human services, voters were more evenly split.

For Colleen Echohawk, who’s running for mayor, it’s possible to close the rifts that have opened around policing in the city. “We have to get better at knowing each other, hearing each other and listening,” she said. “We need to heal. There’s a lot of feelings that are hurt and feathers that are ruffled.”