Opponents of Seattle City Councilmember Kshama Sawant have 180 days to put a recall vote on the ballot. 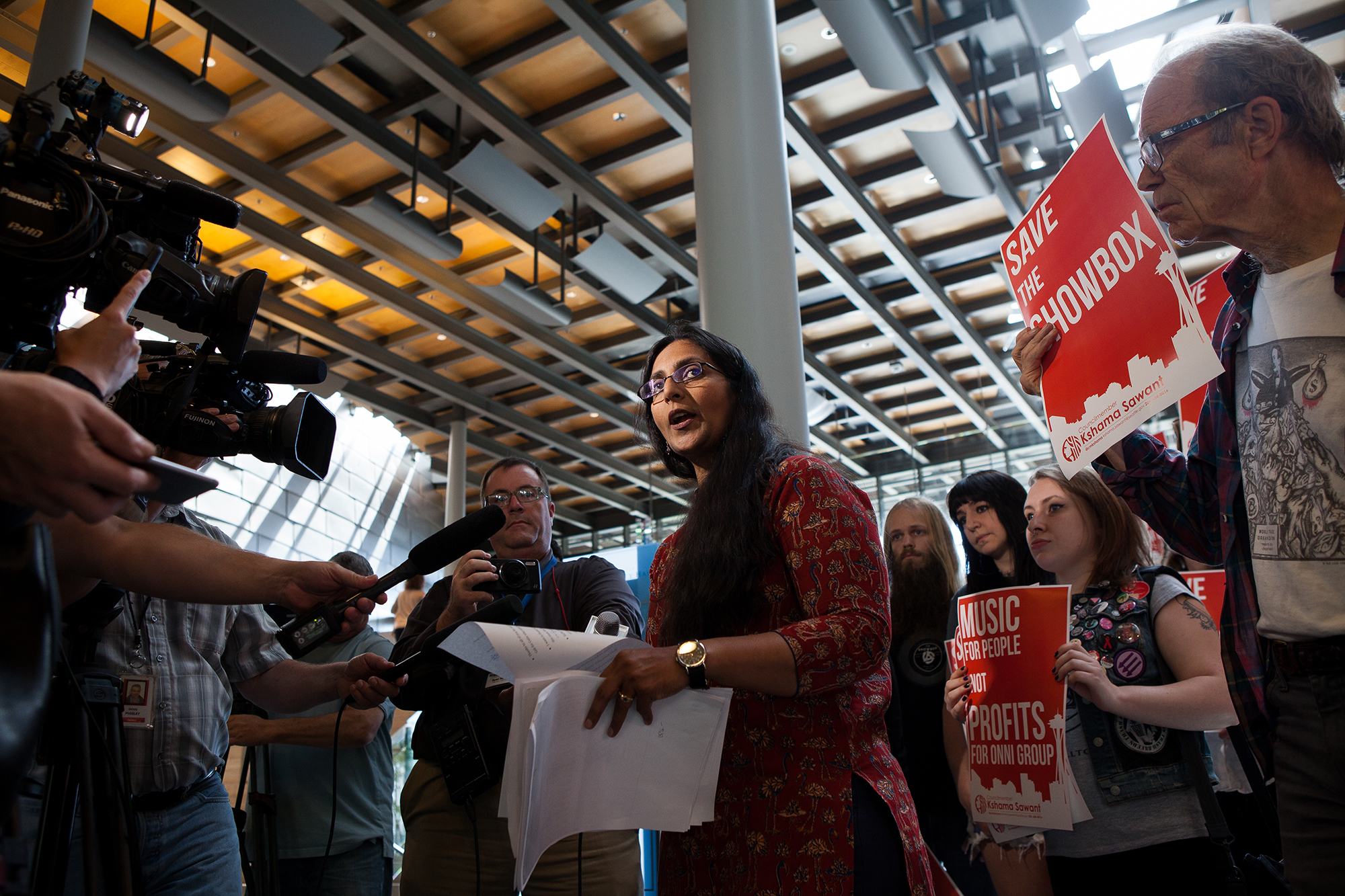 Councilmember Kshama Sawant holds a rally to protest proposed development at the site of the Showbox Market on Aug. 1, 2018, at Seattle City Hall. (Jovelle Tamayo for Crosscut)

The Washington Supreme Court on Thursday gave opponents of Seattle City Councilmember Kshama Sawant the green light to move ahead with a recall petition against the third-term elected official.

In their ruling, the justices agreed that three out of four charges brought against the socialist councilmember were legally sufficient for a recall campaign — including a mixing of political and official business, opening City Hall to the public during a pandemic and participating in a march to Mayor Jenny Durkan's home, thereby making her legally protected home address public.

The court’s decision sets up a potentially contentious and expensive fight in the coming months. Backers of the petition will have up to 180 days to collect about 10,000 signatures from voters in Seattle’s 3rd Council District, which includes Capitol Hill, parts of the Central District, Montlake and Madison Valley.

If the petition backers are successful, the question of whether Sawant should be stripped of her role would go to the ballot. The timing of the vote depends on the speed with which petitioners collect signatures.

This is the second time this year that the state’s highest court has considered a recall petition against an elected official in Seattle. Earlier this fall, the court tossed a petition to force Mayor Jenny Durkan out of office over accusations she mishandled the summer’s protests.

That the court rejected the petition against Durkan, but declined to stop the one against Sawant, is likely to incense backers of the socialist council member, who was reelected for a third time just over a year ago with 52% of the vote.

"Big business and the right wing are furious about the impact of socialist politics and social movements in Seattle and how we have inspired working people around the country," the Kshama Solidarity Campaign, which is raising money to defeat the recall, said in response to the ruling. "They are now trying to use the courts and their deep pockets to overturn Councilmember Sawant’s 2019 re-election and the historic victories she has spearheaded...."

Four out of six charges against Sawant were allowed to move forward last summer by the King County Superior Court, which was required to rule on whether the charges could be considered grounds for removal, not whether they were true.

The charges against Sawant included: opening City Hall to protesters, which petitioners say defied the state’s COVID restrictions; participating in a march to Durkan’s home, thereby violating the protections entitled to Durkan as a former U.S. Attorney; using city resources for a political campaign to “tax Amazon”; and outsourcing hiring decisions to members of the her political party, Socialist Alternative.

Sawant and her backers quickly appealed the lower court’s ruling to Washington’s Supreme Court, while at the same time raising money in preparation for a ballot fight. Sawant and her lawyers have lambasted the charges as absurd, casting them as a right-wing attempt to buck the recently canvassed will of the voters.

She has argued that City Hall is a public space; that she was not, in fact, a leader of the marches to Durkan’s home; and that the questions of her use of city resources and relationship to Socialist Alternative have already been considered and dismissed by the city’s Ethics and Elections Commission.

The Supreme Court sided with backers of the recall on three out of four of their charges, rejecting only the accusation that Sawant delegated her decision making.

The court affirmed in a unanimous decision "that petitioner’s charge that Councilmember Sawant used city resources to promote a ballot initiative and failed to comply with public disclosure requirements, disregarded state orders related to COVID-19 and endangered the safety of city workers and other individuals by admitting hundreds of people into City Hall while it was closed to the public, and led a protest march to Mayor Jenny Durkan’s private residence, the location of which Councilmember Sawant knew was protected under state confidentiality laws, are factually and legally sufficient to support recall."

Colleagues of Sawant on the Seattle City Council voted to pay for her legal defense, but the next phase will be a political one, which means she will have to depend on the loyal base of donors from around the country she's leaned on for past campaigns.

Since her surprise election in 2013, Sawant has simultaneously been the council’s most loved and hated member. That her district includes some of the wealthiest neighborhoods in Seattle — including the gated Broadmoor community and the home of former Starbucks CEO Howard Schultz — has created an awkward tension.

Business groups like the Seattle Metropolitan Chamber of Commerce have made it a mission to unseat Sawant, who has never once held back harsh criticism of the city’s largest companies, namely Amazon. But although opponents have spent millions over several elections to defeat Sawant, District 3 voters have stood by her.

Last summer, following the protests in City Hall and the march to her home, Durkan wrote a letter to members of the council, urging them to open an investigation into Sawant’s conduct and to consider expelling her. The march to her home was particularly upsetting to the mayor because, as a former U.S. attorney, her home address is exempt from disclosure — and even blurred from Google Maps — for safety reasons.

But the council declined to take such steps.

The recall petition was brought by Ernest Lou, a Seattle resident and contractor. The effort has raised over $294,000 so far and was led in court by another former U.S. attorney, John McKay.

Only voters from District 3 may sign the recall petition and vote on the question if it makes it to the ballot. If the recall effort fails, Sawant’s term would expire at the end of 2023. If it succeeds, the council would choose a temporary replacement to fill her seat until the next general election, when voters would choose someone to finish her term.