Despite COVID outbreaks in the county’s jails, some incarcerated individuals say they're not getting enough information about vaccine safety. 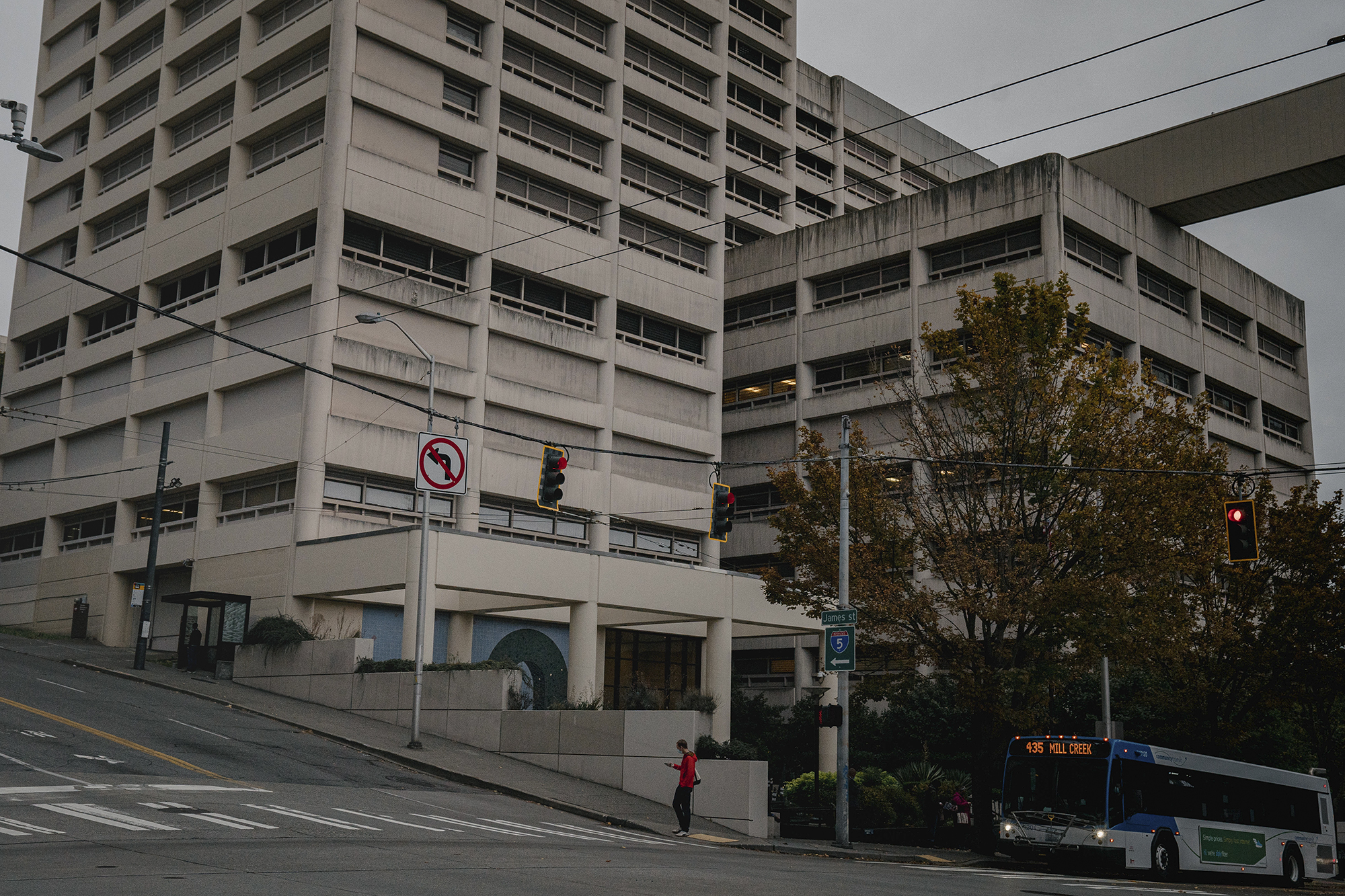 After a year of watching the COVID-19 pandemic unfurl from inside his jail cell, Karim Mitchell-Akram became infected himself last month. He was one of scores to come down with the virus during a recent outbreak inside the King County jail in downtown Seattle.

Mitchell-Akram’s headaches and fatigue confirmed what he already knew: This was a disease that deserved to be taken seriously. He had come to that conclusion months earlier as his hours outside of his cell were cut in half, as Interstate 5 below his window went quiet during rush hour, as family on the outside struggled financially and as a grandfather figure caught the virus and died.

“It definitely had a walls-closing-in type feeling,” he said over the phone from inside the jail.

And yet, even as Mitchell-Akram, who has been in jail since April 2019 on a murder charge, bore the brunt of the virus himself, he was still undecided about getting the COVID vaccine.

“I cannot lie, I was scared to actually get it,” he said.

Mitchell-Akram is not alone. At last count, nearly 60% of people incarcerated in King County jails were rejecting the opportunity to be vaccinated. On April 19, jail staff reported that, of the 860 people they’d offered a jab, just 335 accepted, according to emails provided to Crosscut — a 61% rejection rate. That rate has ticked down very slightly, to 59%, said jail spokesman Noah Haglund. But in a county where 42% of people 16 and over have been fully vaccinated and 64% have received at least one shot, the rejection rate in the jails appears to be leagues above the general population.

Haglund said they do not know how many staff members have been vaccinated.

Among those who work in or around the jail, the rejection rates are concerning. The cramped halls of prisons and jails can act as tinder for outbreaks. And because people in jail are disproportionately people of color, any outbreak exacerbates the inequities already present in who’s catching and dying from COVID-19.

“Addressing the concerns that people in jails and prisons have about the vaccines will be an important step in addressing health inequity into the future,” said Ethan Frenchman, an attorney with Disability Rights Washington who works on issues related to jails and prisons.

Not only are incarcerated individuals more likely to catch COVID-19 as a result of living in a congregate space, they’re also more likely to suffer the worst consequences. That's  because the population of people inside jails and prisons is far more likely to have a disability or other conditions that leave them vulnerable to the disease.

“People who are in jails and prisons have more comorbidities,” said Dr. Marc Stern, a public health expert and faculty member at the University of Washington’s School of Public Health. “So they have a higher chance of getting infected in jail, but in addition to that, they’re more likely when they get infected to get more sick than the average person.”

And if concern for the rights of people in the jail are not enough, said Stern, people outside of the jail should worry that outbreaks will seep into the community.

“Outbreaks in jail and prison don’t stay in jails and prisons,” agreed Frenchman.

Donnica Booker, who has been in the jail on multiple charges for three years, ultimately received the Johnson & Johnson vaccine shot, in part because she believed it was mandatory. Still, it made her uneasy, especially as news of blood clots in a few patients came out and the vaccine was paused. Information was “hit and miss,” and she caught only bits and pieces about how the vaccine actually worked and whether it was safe.

Among those in the same “tank” as her, “One half might be able to catch something that the other half wouldn’t,” she said.

The reasons incarcerated people feel hesitant about being vaccinated are myriad. For Mitchell-Akram it’s a problem of information, he said. As he and others inside the jail became eligible for a shot, he doesn’t recall receiving pamphlets or any other clear source of information. He Is allowed only four hours outside of his cell per day — down from eight hours before the pandemic — which means he doesn’t have as much access to news.

The result is a whisper network inside the jail with incomplete information about how the vaccines work. People’s experiences with the side effects balloon into stories about how the shot makes you as sick as getting COVID.

“My understanding is the vaccine gives you the virus so your immune system can fight it off,” said Mitchell-Akram, which is not an accurate description of how any of the vaccines work. He’s still reeling from his own infection and the intense, 11-day confinement he experienced as a result.

“I talked to somebody on the outs who took the vaccine and they went through the symptoms and that was the vaccine,” he said. “In my head I’m thinking, ‘Why would I take a vaccine when it would potentially do to me what I had before?’ That’s not appealing to me.”

“You can't just provide the vaccine,” said Jaime Hawk, a legal strategy director with the American Civil Liberties Union of Washington. “There needs to be education campaigns from trustworthy sources.” Hawk said she’d seen posters and fliers around the facility and has been tracking what’s working and what’s not.

Haglund, the jail spokesman, said the jail is handing out pamphlets, “having dialogue between people in custody and health care providers and adding an educational video into the jail information video library.” The jail also communicates  with other jail facilities about best ways to increase the uptake. Those who decline a vaccine will be provided the opportunity again.

But the issue is bigger than just King County. Vaccine hesitancy is widespread among incarcerated individuals. The UW’s Stern co-authored a recent report for the Centers for Disease Control and Prevention on vaccine hesitancy in jails and prisons. His team surveyed three prisons and 13 jails on the West Coast, including 10 jails in Washington state. His survey did not include King County. Among the 5,110 participants in the CDC study, 2,318 — over 45% — said they would refuse to receive a vaccine. Nationally, that number is closer to 30%, according to polls.

A majority said they didn’t have information about how the vaccine was developed and whether it’s safe. Many said they did not trust government officials to give them the full picture — a not altogether surprising conclusion among people imprisoned by the government.

“They may distrust a carceral system that has neglected their serious needs,” said Frenchman. “Historically [the carceral system] has in the past used prisoners for medical experimentation. Unfortunately, the long shadow of that dark time is with us still. Not just the jails, but also county and state health departments, need to do what they can to communicate that vaccines have been tested, and they're safe.”

Some organizations are trying to force the issue: Columbia Legal Services filed a lawsuit last month that require state prisons to “implement a robust, culturally responsive outreach and education strategy in partnership with respected voices in the prison community and general public to address issues of misinformation and to build trust around the COVID-19 vaccine.”

At its peak last month, the outbreak in the two King County jails was up to 40 active cases at a time, said Haglund. That was down last week to 13. But with vaccine uptake slow, the situation remains precarious.

It will take a lot of concerted effort to bring up the acceptance of vaccines inside jails, said Stern. Strategies should include finding more trusted voices, including family, to educate inmates about the vaccine’s safety. The facilities also need to make sure their staff is getting vaccinated as an example. Finally, Stern said it could help if jails and prisons use an “opt out” option, rather than relying on incarcerated individuals to opt in.

However it’s done, it’s incumbent on government systems to keep those in jails safe, he said. “The sentencing is the punishment,” he said. “We don’t get to put an additional punishment on top of that that says we’re going to make you sick or kill you.”