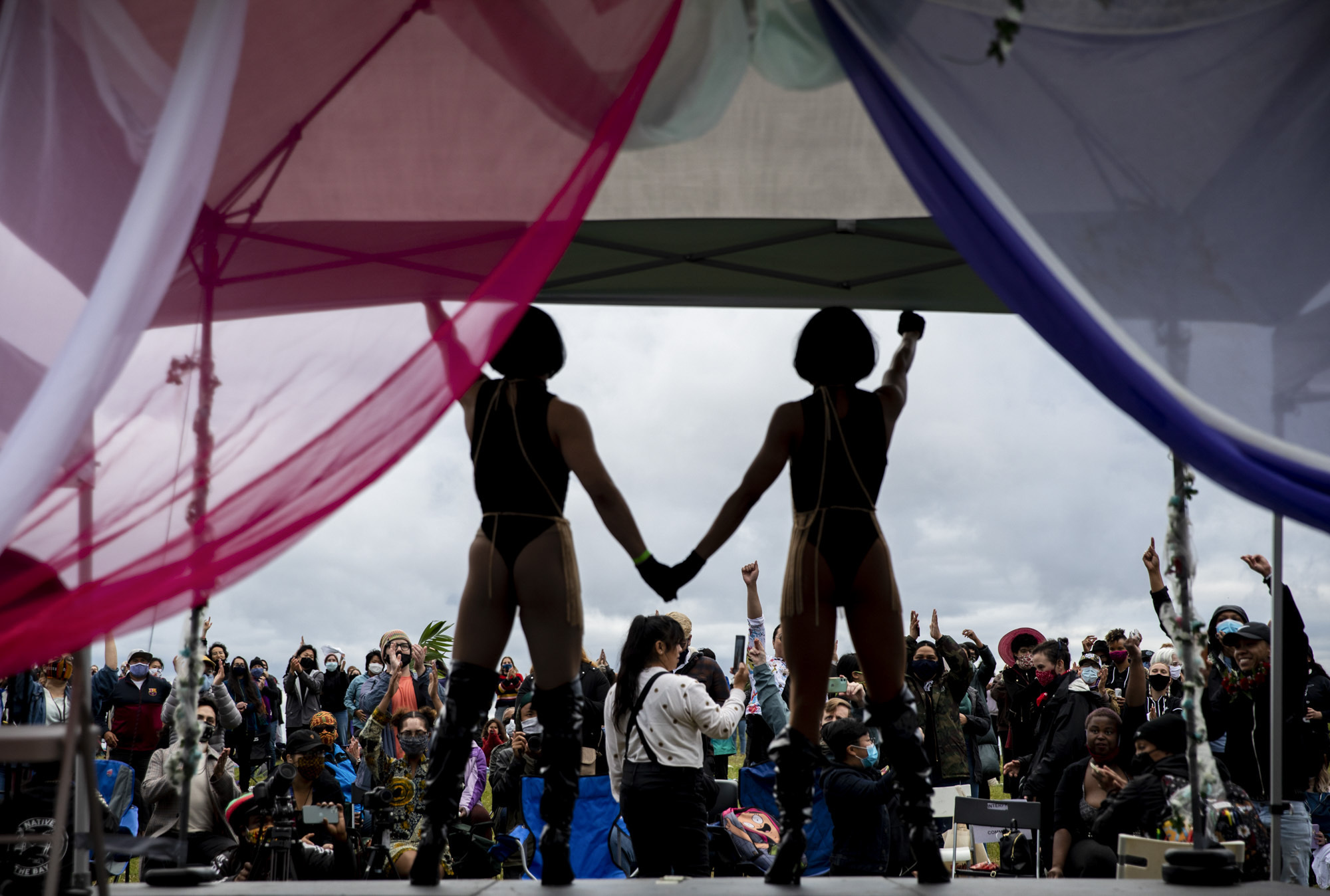 LüChi raise their fists to the crowd during the duo’s performance at Taking B(L)ACK Pride at Jefferson Park on June 27, 2020. (Dorothy Edwards/Crosscut)

The organizers of Taking B(l)ack Pride, one of the multiple Pride events happening around the region this weekend, have a few things to say about the $10 to $50 “reparations fee” they are asking white allies to pay.

“There are people weighing in on this topic … who are LOUD and WRONG about the idea that people are forced to pay or that this fee is anything other than a consensual transaction/donation from folks who support our community and our event,” the group wrote in an email in response to an inquiry from Crosscut.

Secondly, there’s no race test to attend for free. Third, the event has always had a “reparations fee” for white people, which helps offset the cost of the event.

“There is no race police that exists to check 23andMe genealogy results or skin color test ROFL,” the group wrote.

For the second year in a row, Taking B(l)ack Pride will feature performers, food, art and emotional support as a safe space for trans Black and brown people. The event, which takes place at Jimi Hendrix Park in the Central District, is being organized by local groups Trans Women of Color Solidarity Network, Queer the Land and the Alphabet Alliance of Color.

Local and national coverage of the pricing structure has led to hate mail and threats against the event, though local LGBTQ groups have rallied behind it.

The event faced a backlash after local and conservative commentators started covering Capitol Hill Pride co-directors Charlette LeFevre and Philip Lipson’s complaint against the fee, asking the city to investigate it as “a possible ethics and elections violation.”

“We consider this reverse discrimination in its (worst) form,” LeFevre and Lipson’s letter to the city read.

“[W]e would like to urge you to examine the very real social dynamics and ramifications of this issue. Black trans and queer people are among the most marginalized and persecuted peoples within the LGBTQIAS+ community,” the letter read.

“We would like to recommend, if possible, that you educate yourself on the harm it may cause Seattle’s BIPOC community in your pursuit of a free ticket to an event that is not expressly meant for you and your entertainment.”

However, the city’s Office of Civil Rights told Crosscut this week it is treating LeFevre and Lipson’s letter as an open and formal complaint, and declined to comment further. 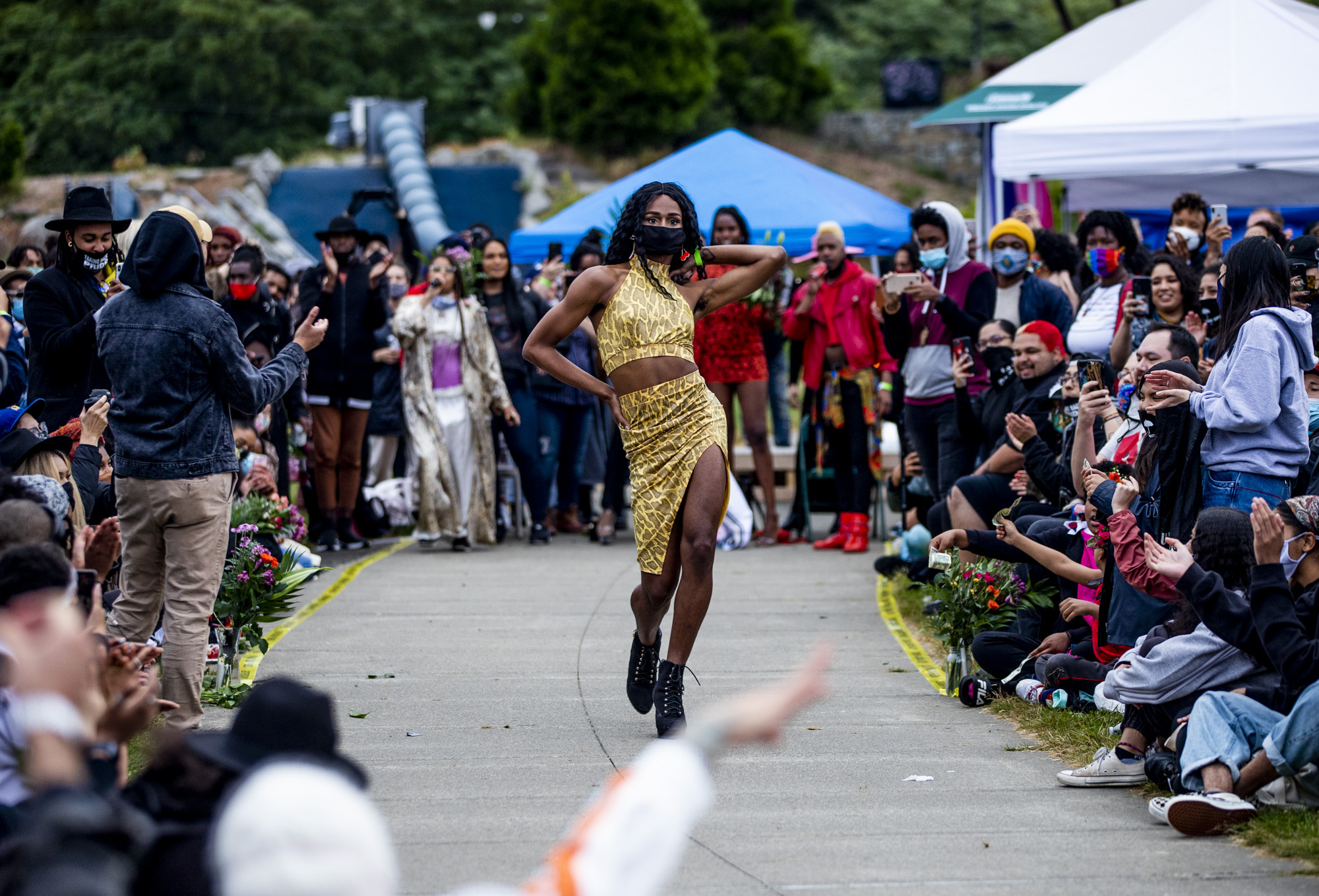 Randy Ford, an artist, activist and founding member of AU Collective in Seattle, walks the runway during a Kiki that ended the night during Taking B(L)ACK Pride at Jefferson Park on June 27, 2020. (Dorothy Edwards/Crosscut)

Randy Ford, an artist, activist and founding member of AU Collective in Seattle, walks the runway during a Kiki that ended the night during Taking B(L)ACK Pride at Jefferson Park on June 27, 2020. (Dorothy Edwards/Crosscut)

Local LGBTQ groups and others are backing Taking B(l)ack Pride in this dispute, including Seattle Dyke March and Seattle Pride, which has replaced its large in-person Pride events, including the downtown Pride parade, with online events for the second year because of the pandemic.

After the complaint was filed, several speakers pulled out of Capitol Hill Pride, planning instead to attend the nearby AIDS memorial event, according to Seattle Gay Scene and Capitol Hill Seattle Blog.

Capitol Hill Pride offered an apology on its Facebook page, and asked for a meeting to “resolve any issues and find common ground.”

“We sincerely want to elevate the segment of the LGBTQ community especially of Black transgender women, recognize the important history and contributions and support this segment of the hidden rainbow,” the statement from Capitol Hill Pride read.

Capitol Hill Pride, an organization that formed Seattle PrideFest, moved the parade from Capitol Hill to downtown earlier this year and garnered its own national scrutiny after banning Seattle police at its in-person rally and march, which also is scheduled for this weekend.

After a call from Crosscut, Lipson referred to the event’s website, which read in part, “We stand proud in the fact we will never charge admission or ask for donations based on anyone's skin color. Dr. King once said he had a dream that we would live in a nation where a person should not be judged by the color of their skin but by the content of their character. We are almost there.”

Race-based pricing, citing systemic inequities, is not a new concept. In 2018, chef/artist Tunde Wey asked white customers in New Orleans to pay two-and-a-half times more than the $12 price for a plate of Nigerian food, to highlight the city’s income disparities between Black and white residents.

Last year, a boutique in Georgia briefly implemented a charge of $20 for personal appointments, but waived it for people of color, saying that they didn’t want the fee to be a barrier for communities to shop at their store. Two years ago, the Afrofuture Fest in Detroit initially charged white attendees twice what people of color would pay, arguing that Black and brown people often couldn’t attend sold-out events in their communities.

Both the Georgia boutique and the Detroit festival backed away from the pricing structure, after local and national pushback.

As for the organizers of Taking B(l)ack Pride, the furor is evidence for why events like theirs are important.

“The LGBTQ community has NEVER been safe for Black and Brown queer and trans folks. Nor have Pride events. It is not wildly out of line to create your own when you don’t feel safe,” the group wrote.