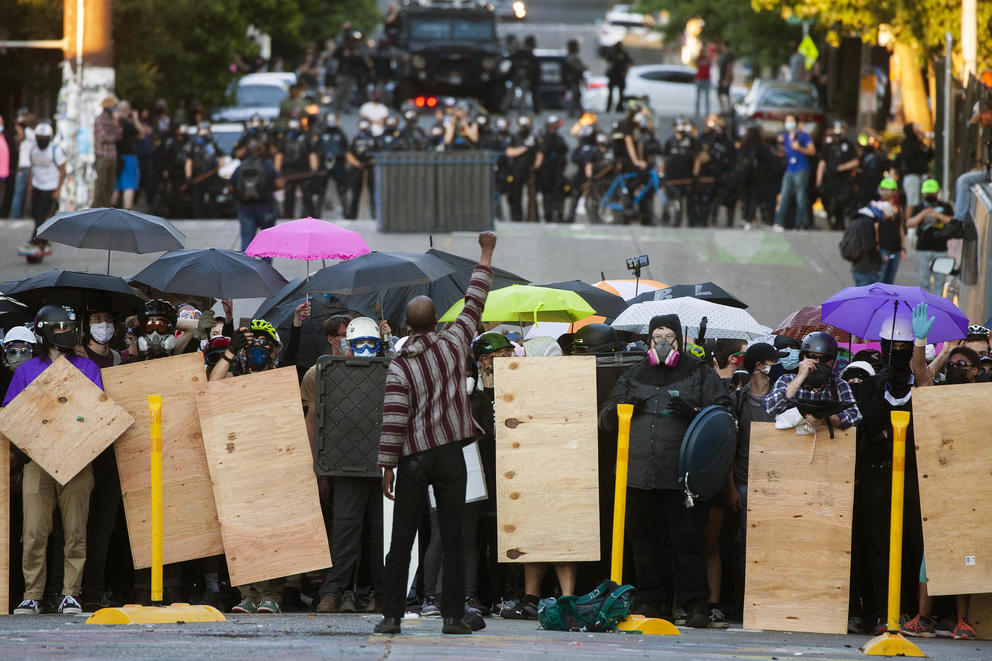 A demonstrator raises his fist above the crowd during protests along the East Pine Street corridor in Seattle’s Capitol Hill neighborhood on July 26, 2020. Demands from community members to reimagine policing in Seattle hit a fever pitch in June of 2020, but city council members now worry they are losing momentum in making those changes. (Matt M. McKnight/Crosscut)

Nearly a year after a majority of the Seattle City Council began making bold promises about “reimagining” or even “defunding” the Seattle Police Department, some members are expressing concerns that those efforts are sputtering.

While the council has earmarked tens of millions of dollars for police alternatives, the process through which those dollars will get out the door is unlikely to pay dividends until well into next year, possibly later. In the meantime, members say they’re feeling increasing pressure to show the skeptical or impatient public — as well as a federal judge, possibly — that community safety can come from somewhere other than law enforcement.

But following a tense council meeting last week, in which council members rejected a pared-down budget cut to the SPD, the next steps are unclear.

“You know, people are going to abandon this project of doing something different with public safety — unless they can see and feel and interact with and know that the replacement things we’re standing up are working,” Councilmember Andrew Lewis said in an interview. Lewis said he supports the long-term work the city has budgeted for. “But at the same time, we need to be doing a strategy together to confront the very real problems that we're seeing at just a basic city services level around public safety,” he said.

Councilmember Lisa Herbold struck a similar note. She pointed to past rhetoric around policing and public safety, how it would start thunderous, only to fade away into process months later — the oft-derided Seattle process. She said she has become concerned that history could repeat itself.

“I’m still working hard on all the things, but I’m raising this concern about momentum and reverting back to the status quo so that people can reflect on that and say, ‘We have seen this in the past,’ ” she said.

City Hall has seen a flurry of activity in the months since protesters pressured city officials into committing to fundamental changes to law enforcement and public safety. The council recently voted to appropriate $30 million to be doled out through a process known as participatory budgeting, in which community members select police alternatives to be funded.

Meanwhile, a task force established by Mayor Jenny Durkan recently released a broad set of recommendations for spending an additional $30 million on upstream community and education programs. Durkan has also put out a request for bids to spend yet another $30 million on land and property acquisition to fight displacement.

The mayor and council have also pushed for expanding the police alternatives that already exist, including a low-acuity response team with the Seattle Fire Department and crisis counselors within the SPD. The council has also voted to move 911 dispatch operations out of the department.

But other pledges have been derailed. Council President Lorena González, who’s running for mayor, acknowledged recently that the city is likely unable to lay off officers based on past disciplinary history. Herbold, meanwhile, has grown frustrated that the city has yet to transfer parking enforcement to a different department, a hiccup she cited as another example of an “unraveling of the council’s unified position” and blamed, in part, “the Durkan administration’s lobbying.”

At the same time, the core elements of the promised changes could take months or years to start paying dividends. The participatory budgeting process was delayed as City Hall struggled for months to decide on the best process for the process' administration. That task has now fallen to the city’s Office for Civil Rights, but the meeting of community members and vetting of projects has been pushed well into 2022.

What’s left is a council teetering between looking for a more immediate payoff versus pushing more money into the slow-burn work of community budgeting.

A microcosm of the divide involves what to do with salary money “saved” by the department after a record number of officers resigned last year. Herbold had proposed taking $3 million of those savings away from the department while allowing $7.5 million to go back to the police for technology, civilian positions and other expenses not related to officer staffing.

That proposal failed. For some members of the council, the cuts were not deep enough; for others, too deep. Councilmember Kshama Sawant called it a “farce” because it did not put more money into participatory budgeting. Councilmember Alex Pedersen, who opposed any cuts, called it a “distraction” from the more important task of contract renegotiation that sent “an unproductive and negative message to the remaining city government workers in the public safety field who are already stretched thin.”

For Herbold, that failure was discouraging and emblematic of a bigger problem.

“That was my best shot at finding a compromise among council members who I felt very much in the summer and the fall were really focused on finding a unified position,” said Herbold. “Now we have a situation where some council members think the cut was too small and other didn’t want a cut at all.”

Underpinning the balancing act are last summer’s pledges from a majority of the council— with varying degrees of specificity — to make significant cuts to the Seattle Police Department, including via layoffs. For those who called on the council to make those cuts — or to “defund the police” — any indication of backing down is seen as cowardice.

Sean Goode, executive director of Choose 180, a criminal justice diversion program for young people, sees a council getting away from those pledges. “I think what's happened is you have a city council that, generally speaking, in the midst of the protests, responded emotionally to the very real needs of Black and brown people in Seattle,” he said. He sees the council trying to figure out “how they can do a ‘both and’ approach,” he said. “I think, City Hall is in dire need of understanding their identities.”

But the council also faces a different sort of criticism for making the pledges at all. “History is littered with false political promises,” said Mayor Durkan. “And I felt, as mayor, my job was to be really honest about what I thought we could do, and what its impacts were, and what we couldn't do.”

Durkan holds up the work of her appointed task force, whose recommendations for spending $30 million focus on upstream fixes for Black, Indigenous and people of color  communities, including education opportunities, business support, access to public health and more affordable housing.

For Lewis, sustaining momentum is done through passing the “see test” — when members of the community can see and feel the work being done in City Hall. He stands behind the work the council has done so far, but has also begun pushing for spending police dollars on programs that could lower the temperature around tent encampments in the city. In a last-minute amendment, he proposed spending some of the police dollars on JustCare, a program designed to move people from encampments into hotels.

“I actually don't think those things are going too slowly, necessarily, because I'd rather get it right than do it fast,” he said. “I guess that my thing is we also need to be nimble and, you know, if there's one thing we haven't been able to do very effectively as a local government is being nimble.”

At the height of last summer’s protests, much of the council — even those skeptical of defunding the police — committed to a deep structural change to how public safety is enforced, beyond tinkering or reform.

Herbold said the struggle is to keep focused on that goal. “I’m an optimistic person and I’m well familiar with the fact that incremental change does build toward bigger systemic change,” she said. “But what I’m trying to respond to is a request for something more fundamental than incremental change.”