Why care for Native homeless populations in Seattle looks different

Leaders of Native-led organizations focusing on homelessness have critiqued recent funding directives from the city. 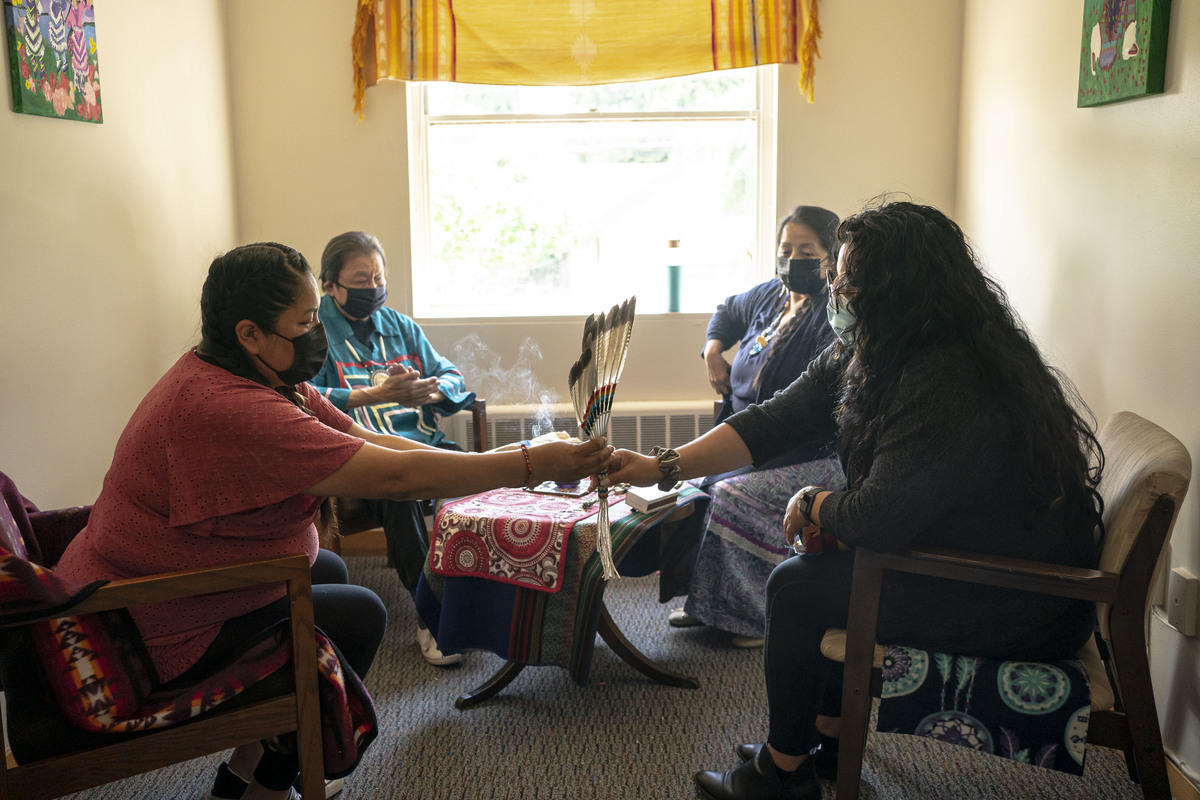 When homelessness outreach worker Rose Looking (Assiniboine-Sioux) got a call from a woman whose PTSD was triggered and who was in the midst of a panic attack, Looking knew what to do.

“I told her to pull out her smudge,” Looking says, referring to the sage used for smudging that her organization had previously provided. “And I started to sing her a song, and she was calm after I finished singing that song.”

Looking is a cultural responder with Mother Nation, a Native-led homelessness organization serving Indigenous people throughout north Puget Sound. Culturally sensitive support and outreach is what her organization is all about.

The needs of the Native people whom Looking serves often differ from the needs of non-Native people dealing with homelessness. Looking says there have been plenty of instances like this, where she’s responded first by offering Native-oriented care that requires a deep knowledge of the people in her community.

It’s especially important, she says, given the disproportionate number of Native people dealing with homelessness: In King County, Native people make up less than 1% of the area’s population but 10% of people experiencing homelessness.

“That’s why I say our ways are the only ways, sometimes, that we can deal with our people,” Looking says.

A recent rollout of Seattle’s updated homeless outreach contracts brought these differences to the surface for participating Native service organizations. While outreach organizations had expected contract requirements similar to previous years, this year’s changes caused some Native-led homelessness organizations to refuse to sign on.

After a swift outcry, with some of these protests in the form of a letter penned by Seattle-area Native homelessness organizations, the changes were dropped. Now, the city is in discussions with the organizations to create a new agreement.

In the letter, the organizations argued that the now-rescinded requirements would hinder their ability to do outreach in a culturally sensitive way and would force them to participate in encampment removals or “sweeps.” These organizations also said the new regulations would allow the city to dictate which encampments the participating contractors should prioritize. That wouldn’t make sense for Native community members who “are geographically dispersed and often reside in smaller groups that may not be deemed a priority by the city.” And they took issue with the contract’s data collection requirements, which they said would be intrusive and delay their work.

Norine Hill (Oneida Nation of the Thames), executive director of Mother Nation, says she doesn’t typically have issues with funder requirements. There’s usually room for negotiation, which allows Hill to ensure that the money can be used for culturally specific care. This time, there wasn’t any negotiation until after the group sent the letter.

“We need to stay on our mission and why we exist — that’s always our priority,” she says. If the contract would have remained the same, Hill says, Mother Nation would have moved on entirely.

Esther Lucero (Dinè), president of the Seattle Indian Health Board, called the actions of the city “paternalistic,” explaining that having the city dictate how resources should be used goes against their promise for an equitable approach toward homelessness outreach.

“That goes completely against the equitable approach that they've committed to, you know, which would involve more community engagement, like community planning, innovative creative ideas,” Lucero says, “not just saying, ‘Hey, we're paying for these outreach sweepers, so now we’re going to deploy them as we see fit.’ ”

In general, Lucero says she wishes that the city would simply distribute its resources to community organizations like hers instead of trying to direct strategies for homelessness outreach to Native communities themselves.

“If you truly want to make an impact in equity, if you want to implement an equity model, it requires the transfer of power and resources — that’s it,” Lucero says. “If we're truly working with a community, then you get the community the resources and you get out of the way.”

The Chief Seattle Club signed on to the contract before the new terms were rescinded. Derrick Belgarde (Siletz/Chippewa-Cree), the organization’s executive director, says the contract was finalized after his organization had already signed on — before it knew of the issues the contract’s parameters would create and after it had already begun spending money under the expectation of being able to use those dollars. He says Chief Seattle Club would have refrained from using these funds despite signing on, if the contract had stayed the same. That would have potentially caused future issues for the organization in taking care of the expenses they already had.

Now that the city has taken a step back, Belgarde hopes officials will take the group’s concerns into account in a new contract.

“I hope that they continue to recognize that the experts are on the ground,” he says. “We need to be talked to — we’re working out there day in and day out, we know what’s feasible and what’s not.”

City officials spoke with these organizations on Thursday to discuss the concerns and expect to have a new contract soon. In an email sent to outreach partners prior to the meeting, Deputy Mayor Tiffany Washington voiced an interest in moving forward with future changes collectively and through conversation.

"Programs whose primary mission is to deliver culturally focused outreach can spend the majority of their time engaging with people aligned with their organization’s focus-population, with a smaller portion of time spent collaborating with the City on proactive outreach," Washington wrote. "We will work together to determine the right percentage."

Some of these conversations will involve figuring out a method for data collection.

"We are optimistic that all City-funded providers will be able to continue to carry out their critical work in a way that works for them, their clients, and the people of Seattle," said Kamaria Hightower, a spokesperson for the mayor's office, in an email. "What remains important for the City is being able to measure what success looks like through capturing and analyzing data."

Andrew Guillen (Cahuilla/Luiseño), grants and contracts director at Seattle Indian Health Board, says that he hopes the city will learn from this experience and discuss big changes with organizations in the future. He says it’s not unusual for contracts to come late in the year, so his organization had expected that to an extent. What it hadn’t expected were big changes to come after the Seattle Indian Health Board had already begun spending for projects, which can cause major issues.

“Community engagement is at the heart of this,” Guillen says. “We know our community — and it makes sense that the city would engage us when making changes.”