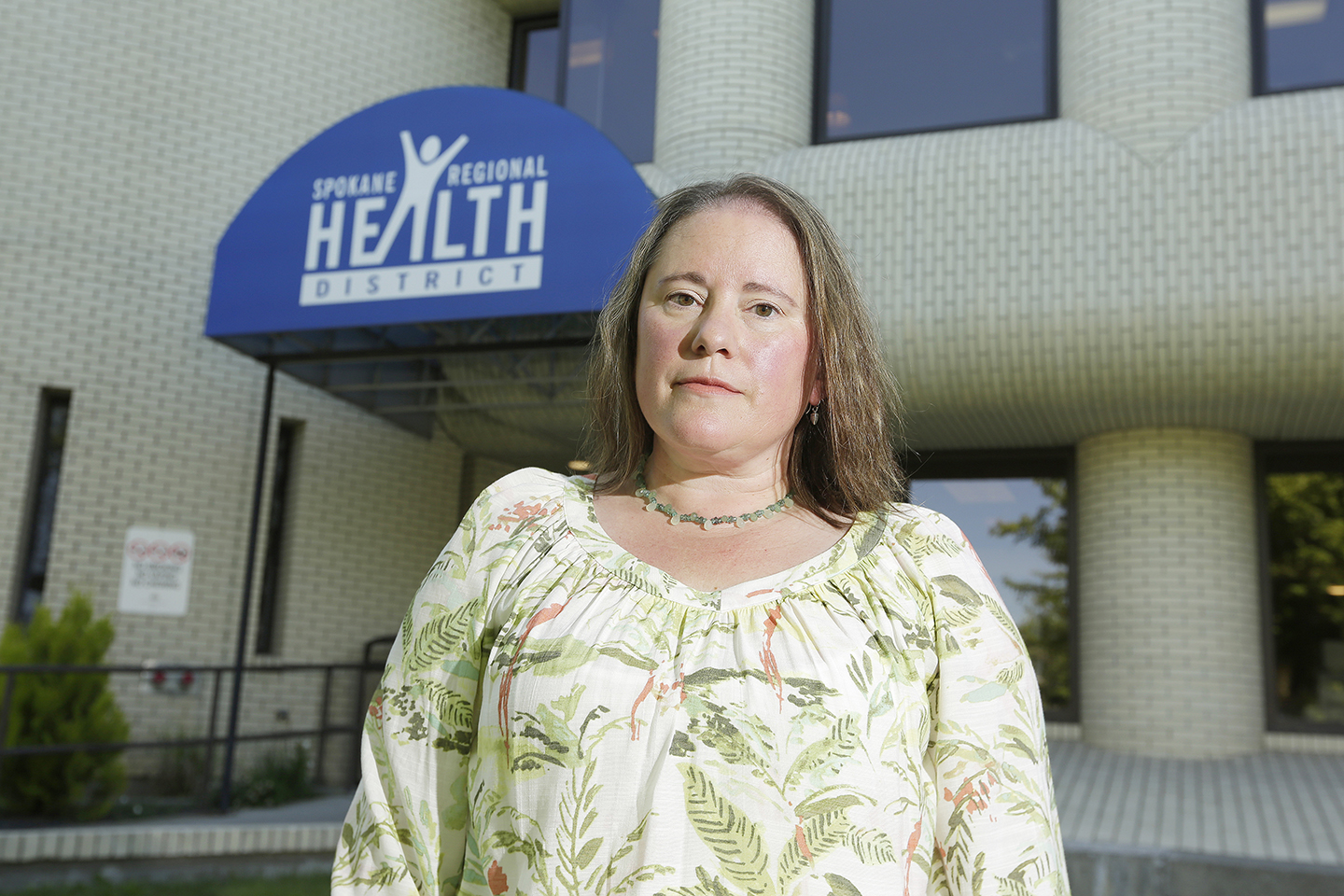 Erika Henry was fired from her job as acting assistant secretary for emergency preparedness and response in the Washington State Department of Health. Her dismissal came after she wrote an email criticizing Spokane Health District Administrator Amelia Clark for removing Spokane County Health Officer Bob Lutz from his job. Henry is photographed here in front of the Spokane Regional Health District building, June 25, 2021. (Young Kwak/The Inlander)

Like many Spokane citizens, Erika Henry was incensed to learn that Spokane Health Officer Bob Lutz was being fired in the middle of a pandemic.

So on Oct. 30, she emailed the Spokane Board of Health, taking aim at Spokane Regional Health District Administrator Amelia Clark, who announced that day that Lutz had been let go.

“I’m writing to say that I am appalled by the [board of health’s] support of Amelia Clark’s baseless claims against Dr. Lutz. Many of you know him personally and professionally, have for years. Yet you let an insecure weakling of a leader strong-arm you into ousting him based on vague claims of what … personality conflict?” Henry’s email began. “Tell her to grow up and do her job.”

This story was originally published at The Inlander on July 1, 2021.

The problem, at least according to the Washington State Department of Health, is that Henry was a high-ranking state health official, holding the position of assistant secretary for emergency preparedness and response. The Department of Health fired Henry in May, with Chief of Staff Jessica Todorovich calling Henry’s email “egregious” and “highly aggressive, inappropriate and disrespectful” in a disciplinary letter obtained by the Inlander.

Henry feels that being fired for a personal email is a violation of her First Amendment right to free speech.

“I wrote that from my personal email on personal time,” Henry tells the Inlander. “I used my real email and real name. I thought it was important to do.”

Her termination is another significant shake-up among top personnel during the pandemic at the Department of Health, which in December welcomed a new secretary of health, Umair Shah, following the departure of former Secretary John Wiesman.

It also represents the continued fallout from the controversial ouster of Lutz last fall. On Oct. 30, Clark announced that Lutz was no longer the health officer, even though Lutz had not resigned and Clark had no authority to fire him without board approval. The Spokane Board of Health voted to fire Lutz days later, but the Washington State Board of Health is now deciding whether Clark fired Lutz illegally before then and whether that warrants her removal.

Health district spokesperson Kelli Hawkins says Clark was unavailable for an interview for this article. The state Department of Health, in a statement, says Henry “has been afforded all due process to which she’s entitled. We now have an impending appeal and respectfully decline to comment further.”

State Senate Majority Leader Andy Billig, D-Spokane, says that while he doesn’t have enough details to comment specifically on Henry’s termination, he does think it raises a broader question of what a public employee can say if they aren’t using state resources.

“I believe the threshold should be very high for the state to take action against a public employee for things they do on their own time,” Billig says. “I’m trying to think as a legislator: What are the implications for state employees generally speaking their own mind on local issues? And does it hurt us in terms of retaining or recruiting people to work on behalf of the citizens of Washington state?”

Lutz, interviewed in the investigation of Henry’s email, expressed disappointment that Henry was punished, records show.

“I feel very badly if her career is adversely impacted by my situation. There was a lot of fallout at the [Spokane Regional Health District],” Lutz said. “Feels like collateral damage.”

Following Lutz’s dismissal, the relationship between the local health district and the state Department of Health was shaky. Former Health Secretary John Wiesman said publicly last fall that he was “concerned about how things have transpired” as the state Board of Health began its investigation into the matter. The state health department, meanwhile, hired Lutz.

But on Feb. 8, new Secretary of Health Shah came to Spokane to meet with members of the Spokane Board of Health in an effort to increase “transparency and trust” between the agencies, state records show. Not knowing about the email, he asked Henry, who lives in Spokane, to accompany him.

When Clark found out Henry was coming, Henry says Clark asked Henry’s sister-in-law, a health district employee, to print off the Oct. 30 email. Spokane County Commissioner Mary Kuney, chair of the local health board, says that before the meeting, she, Clark and Vice Chair Kevin Freeman discussed the email together.

The meeting quickly turned sour when Freeman, also the mayor of Millwood, confronted Henry in front of the room of around a dozen people. Shah later described feeling “blindsided” by the tense interaction during which Freeman says the email made it more difficult to trust the state health department.

Henry says she began “bawling” and texting Chief of Staff Todorovich from the bathroom. Those texts, which Henry provided to the Inlander, further reveal friction between the state department and local health district.

In the texts, Todorovich at one point says, “Freeman sounds as petty as she is,” referring to Clark.

“I didn’t have any idea that she would attack you?? What a terrible person,” Todorovich wrote.

“Dr. Shah has great respect for Lutz and Torney [Smith]. They are both proof that Spokane is off their game,” Todorovich wrote.

Before the Feb. 8 meeting ended, county Commissioner Kuney handed Shah an envelope labeled “Confidential, for Dr. Shah.” It contained both the Oct. 30 email from Henry and a separate email from Smith that was written in support of Lutz. Once Shah saw Henry’s email, he was “livid and shocked,” he’d later tell an investigator from the health department’s human resources unit. Henry was put on leave as the investigation was conducted.

Clark was the first person the investigator talked to. When asked whether Clark thought Henry could continue in her job, Clark “thought for approximately thirty seconds,” records show, before answering that “she did not think so.”

Clark then expressed gratitude that the state was investigating Henry, saying Shah “did a lot to build trust, did his due diligence, built good faith, and we feel [we] were listened to,” records show.

On May 19, Todorovich wrote a letter notifying Henry she was being fired.

The letter called out Henry’s word choice and tone in the email. It noted that Henry is a “visible, high-profile leader” for the Department of Health and that sending the email to the Spokane Board of Health “presents an apparent conflict of interest.” The Spokane Regional Health District receives funding from the state Department of Health based in part on the input from the department's Division of  Emergency Preparedness and Response, which Henry was leading at the time.

This, however, was a departure from Todorovich’s initial reaction when she heard of Henry’s email. Texts from Todorovich on Feb. 8 — before she’d seen the email — show that she told Henry she had “every right to express yourself as a private citizen to your local board.”

In fact, Henry consulted with two legislative policy analysts at the Department of Health before sending the email in the first place. They told her sending an email as a private citizen was a “protected right.” Henry did not share the content of the email with them before sending it.

One of those policy analysts, Travis Nichols, also sent an email Oct. 30 to the personal account of Ben Wick, then the chair of the board of health. Nichols wrote that he’s “baffled as to why in the world you, as someone I know, trust and respect, would allow, much less support, a request for Dr. Lutz’s termination,” records show. Nichols says he has not faced any professional consequences for doing so.

Henry’s message was more combative, suggesting Clark was incompetent, has a “lack of fortitude” and that she “cowers from criticism.” She says now that if she’d known the consequences for writing the email the way she did, she wouldn’t have written it. But she maintains that the Department of Health shouldn’t punish her for expressing her personal opinion as a Spokane resident affected by Lutz’s ouster.

“They say that had I written a different email, things would have been different,” Henry says. “And I don’t know where that line is. How much would I have had to have pulled back?”

For his part, Freeman says his goal in confronting Henry on Feb. 8 was not to intimidate Henry, nor to get her fired, even though he thought the email was an inappropriate “ad hominem attack” against Clark.

“If Kevin Freeman of the city of Millwood can influence the Department of Health, I don’t know what to say about that,” Freeman says.

Betsy Wilkerson, a member of the Spokane City Council and Spokane Board of Health, says firing Henry for her personal email was wrong.

“I think it’s a free speech issue. Last I counted, I received about 1,800 emails [about Lutz],” Wilkerson says. “Everybody had an opinion, and the last I checked, we are entitled to that opinion.”

Wilkerson argues that it’s Clark who has damaged the community’s trust in the health district.

Henry has appealed her termination to the state’s Personnel Resources Board. But beyond her own dismissal from the Department of Health, Henry says she’s concerned that the Spokane Board of Health is spending energy tracking down emails from citizens opposed to their firing Lutz.

“People in Spokane should care that their board of health is taking vindictive action against people who spoke out against what they did,” Henry says.