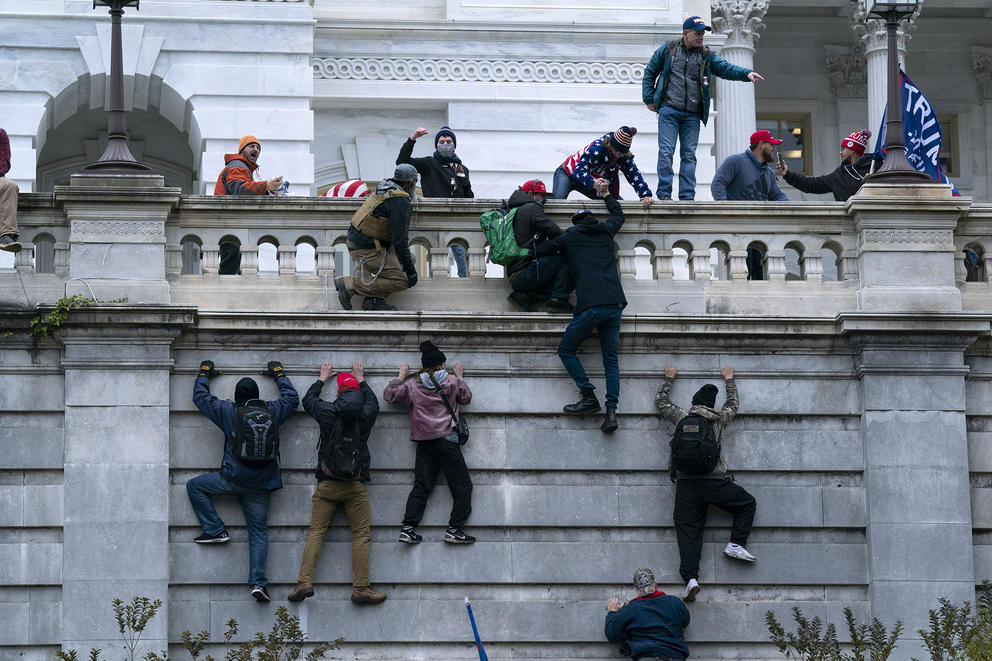 Update, Aug. 6: Seattle Police Chief Adrian Diaz announced Friday he's firing two officers who were seen near the Capitol building on Jan. 6. His decision follows the recommendation from the Office of Police Accountability. "The two officers were found to have crossed the outdoor barriers established by the Capitol Police and were directly next to the Capitol Building," Diaz said in a statement. "Clear evidence places them directly next to the Capitol Building.  It is beyond absurd to suggest that they did not know they were in an area where they should not be, amidst what was already a violent, criminal riot."

Two Seattle police officers should be fired for their role in the Jan. 6 riot at the U.S. Capitol building in Washington, D.C., an internal police oversight agency has concluded in a report released Thursday.

Four other officers who were in D.C. on the same day should not face any discipline, the agency said — three because they were not found to have engaged in any wrongdoing and a fourth because the circumstances surrounding his involvement were inconclusive.

The decision as to whether to actually follow through on the disciplinary recommendations from the city’s Office of Police Accountability lies with interim Seattle Police Chief Adrian Diaz. Diaz previously pledged to terminate any officer who participated in the Jan. 6 attack on the Capitol. If he disagrees with the OPA’s conclusions, he is required to write a letter to the mayor and the Seattle City Council explaining his reasoning.

Diaz will make his decision within 30 days following a hearing for the two officers, a department spokesperson said in a statement.

Lorena González, the Seattle City Council president and a candidate for mayor, agreed with OPA’s investigation that the two officers should be fired. She also called on the department to discipline the other four officers, calling the events of Jan. 6 “not simply your run-of-the-mill political rally.”

“SPD leadership must hold accountable the two officers who breached restricted areas on the Capitol grounds and acted complicitly with those who stormed the Capitol Building, and they must be terminated immediately,” she said in a statement. “Additionally, there should be disciplinary action and accountability for the four other officers who participated in the reprehensible events on January 6.”

The hotly anticipated conclusions of the OPA — the office tasked with investigating internal and external complaints against police staff — were published after a six-month inquiry that saw investigators retrace the steps of the officers who were in D.C. on Jan. 6. In the course of their investigation, the OPA staff visited Washington, D.C., hotels, restaurants and bars where the officers stopped, subpoenaed records, spoke with local and federal law enforcement, demanded personal phone and bank records from the officers and combed through thousands of hours of video footage.

There was no dispute as to whether the officers were in D.C. on Jan. 6. Rather, the task of investigators was to differentiate between their First Amendment rights and illegal behavior.

In the case of the two officers whom the agency recommended should be fired, the balance tilted toward the latter, according to the summary report released by OPA. While the OPA could not find evidence of the officers themselves storming the U.S. Capitol, visual evidence showed they were trespassing within the vicinity of an area where behavior that should have been clearly illegal was taking place, investigators found.

“While they smiled and looked at the Capitol Building … rioters defiled the seat of American democracy and assaulted numerous fellow officers,” said the summary of the investigation’s findings. “That they, as SPD officers, were direct witnesses to the acts that were going on around them, including the scaling of the Capitol Building walls, but did and said nothing, compounds this. Ultimately, [Seattle Police Department] employees … are strictly held to the law. They violated the law here and, as such, acted contrary to SPD policy.”

The roots of the investigation date back to the days immediately following the Jan. 6 storming of the Capitol building. Two Seattle officers were spotted in D.C. in photographs posted to Facebook, spurring Diaz to place them on paid leave and the OPA to open an investigation. Diaz then called on any other officer who was in D.C. at the time to come forward. Four more officers did. Those four were not placed on leave.

The investigation, which was required to be completed within 180 days, was sprawling. Investigators leaned particularly on communications with local and federal law enforcement. The most significant piece of evidence against the two officers came from the FBI, which, after being shown photographs of the Seattle police officers, produced a video still of two officers near the Capitol at the time of the riot, when the area had been closed off.

In interviews with OPA investigators, the two officers, who were not named in the report, contended that they were not aware that the area had been closed off, nor that individuals had already breached the building at the time. One of the officers called the investigation “discriminatory towards him for his political ideology.”

But the OPA rejected their arguments, based in large part on interviews with D.C.-area law enforcement, who said it would have been clear to anyone in the area at the time that an illegal riot was taking place.

“OPA’s investigation, and particularly the review of video and interviews of Washington, D.C., law enforcement personnel, indicates that the accounts provided by [the two officers] are simply not credible,” reads the report. According to D.C. law enforcement, “anyone in that vicinity would have been aware of the violence and chaos that was ongoing,” the report concluded.

A third officer, who was initially with the two officers captured in the video still, told investigators he left “when he saw ‘anarchist’ looking individuals who made him feel uncomfortable." Although the decision was “a close call,” the OPA could not prove or disprove the third officer’s story and so did not recommend any discipline. The report noted, however, that “OPA’s investigation did not exonerate him” and it remains possible he also trespassed.

The other three officers said in interviews that they had briefly attended former President Donald Trump’s Jan. 6 speech, but then spent the rest of the day in restaurants, bars or their hotel rooms. Investigators were able to corroborate most of their stories, concluding that their actions were protected by the First Amendment.

“These officers were entitled to exercise their freedom of expression and to assemble,” said the report. “That they did so in a manner contrary to the majority view in Seattle does not alter this view. This is the case even if I, as the decider in this matter, disagree vehemently with everything the rally stood for.”

Chief Diaz is not obliged to follow the recommendations from the OPA to terminate the two officers. In May, the OPA sustained a complaint against an officer who used tear gas following a scuffle with a protester holding a pink umbrella. But Diaz overturned the finding on the grounds that the employee on the line had not made the decision to use the so-called less lethal crowd control weapon. Diaz later demoted an assistant chief instead.

If Diaz does decide to move forward with discipline against the officers, the police officers union could step in to their defense and appeal the decision to an arbitrator, where discipline is often reduced or repealed.

As the investigation unfolded, the union has worked behind the scenes to limit its scope, filing a grievance in May in an attempt to halt the collection of personal documents from the officers. Although the report is complete, that grievance remains outstanding and could set a precedent for future OPA investigations.

One of the six officers refused to provide personal documentation and, as a result, is now the subject of a separate OPA investigation for insubordination.