Poll: WA isn’t as optimistic as it was six months ago 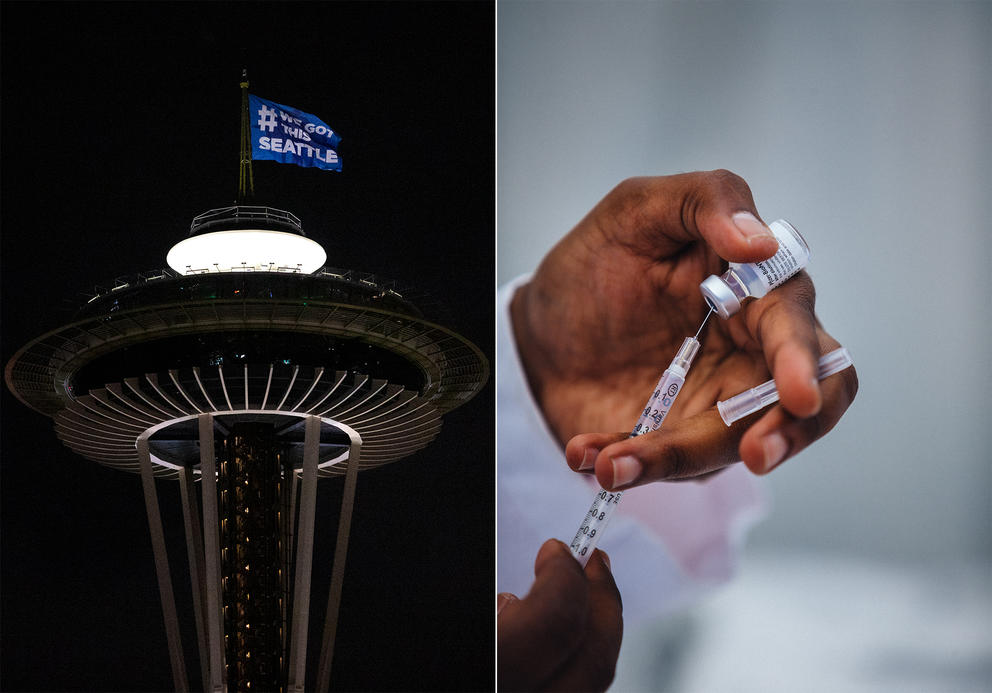 A #WeGotThis flag is seen flying atop a closed Space Needle in Seattle amid COVID-19 pandemic, March 26, 2020. (Matt M. McKnight/Crosscut) Right: Somali Health Board executive director and Othello Station Pharmacy owner, Dr. Ahmed Ali, draws a dose of the Pfizer COVID-19 vaccine at a vaccine clinic hosted by the Somali Health Board at Oromo Cultural Center in Seattle, Washington, Saturday, May 29, 2021. (Lindsey Wasson for Crosscut)

Washington state voters are less optimistic about the future than they were six months ago, even as more are choosing to get vaccinated against COVID-19, a new poll finds.

In the Crosscut/Elway Poll released on Tuesday, only 46% of Washington voters surveyed said they expect things to go well in the United States in the coming year. A larger share of survey respondents 一 50% 一 said they expected things to get worse.

Those numbers looked rosier in a poll released at the start of the year. In that Crosscut/Elway Poll, fielded in late December, 54% of people said they expected things to improve nationally, and only 40% saw things getting worse. Voters’ outlook for Washington state was also brighter in late December compared with July.

Pollster Stuart Elway said he expected people to be a little cheerier than this latest poll showed, considering pandemic restrictions are easing and the world is starting to open up.

But it’s possible people might have been feeling especially good at the end of last year, shortly after the release of new vaccines, only for their spirits to decline as the pandemic persisted, he said.

“I’m wondering if it’s partly the reemergence of the Delta variant, and people thinking, 'Oh my God, are we going back into this again?’ ” Elway said. ”That would dash people’s hopes.”

In their responses to the poll, people said the pandemic was a factor in their optimism, but they also mentioned concerns about the economy and national politics.

As more people get the vaccines, vaccine hesitancy appears to be dwindling, the new poll suggests.

In April, 19% of poll respondents said they wouldn’t get the vaccine, while 10% were undecided.

This month, those who won’t get the vaccine made up only 13% of poll respondents, while only 4% said they were undecided.

In the latest poll, three out of four of the people surveyed said they either have been fully vaccinated (72%), are partially vaccinated (2%) or are scheduled to receive a dose of the vaccine (1%).

The Crosscut/Elway Poll surveyed 400 registered voters across Washington state, with the number of respondents chosen from different regions mirroring the state’s population distribution. The poll was conducted from July 13 to 17.

The poll has a 5% margin of error at the 95% confidence level, which means that if the survey had been conducted 100 times, the results would be within 5 percentage points of the results reported here at least 95 times.

Looking closely at the poll numbers reveals sharp partisan divides. Notably, Republicans and Democrats had very different opinions on how well the coming year will go in Washington state.

Seventy-eight percent of Democrats said they feel things will get better over the next year, while only 16% of Republicans felt that way. Among independents, 39% had positive predictions for the coming year.

Those partisan divides were also reflected in answers to questions about climate change, immigration policy and the effects of racism.

While 97% of Democrats and 57% of independents said climate change is a serious threat requiring government intervention, only 19% of Republicans thought so.

Meanwhile, 90% of Republicans said immigrating illegally to the United States was a serious threat to the American way of life, compared with only 13% of Democrats. Elway said “it is remarkable how stark” the divide is between Democrats and Republicans on cultural and social issues especially.

“There’s no middle ground between the partisans on those issues,” he said. “So you have to wonder how you ever would come to a policy solution or some kind of compromise.”

Some of the answers people gave seemed to reflect their feelings about who is in the White House.

The percentage of Democrats in the latest poll who felt the country is on the right track reflects a complete reversal from how Democrats felt four years ago, shortly after the election of Donald Trump. In a July 2017 poll, only 16% of Democrats were feeling optimistic about the country’s direction; in the new poll, 71% of Democrats had a positive outlook.

Conversely, in 2017, 78% of Republican poll respondents said they felt things were getting better in the country, but in this month’s poll, that number dropped to 16%.

Michael Koznek, a 60-year-old resident of Maltby in Snohomish County, is one of this month’s poll respondents who expects things to get better in the coming year. He said that’s partly because people are following COVID protocols and getting vaccinated, but also because of Joe Biden’s election.

“It gives me hope that we’ll come out of this anti-democracy phase we’re in,” said Koznek, who identifies as a Democrat.

He criticized Republicans for promoting false claims that the November 2020 presidential election was stolen 一 they “are just kind of lying all the time,” he said 一 as well as for being “anti-vaxx.”

Koznek said he also thinks Biden will do far more than his predecessor to fight climate change, an issue he sees as incredibly urgent.  “Every day we don’t do something it’s getting worse 一 it’s going to be a steeper hill to climb the longer we take,” Koznek said.

Tracy Reimers, who owns a vintage furniture store in Northeast Seattle, is feeling decidedly less optimistic. She thinks the next year will be tough because of inflation, as well as the reality that many of the businesses that closed during the COVID-19 pandemic won’t be coming back.

At every level of government, Reimers is concerned that politicians haven’t been doing enough to help small businesses struggling during the pandemic. She’s also frustrated with how much money politicians have been spending to combat homelessness, without seeming to put a dent in the problem.

“When you look at the amount of money from the feds going to the homeless situation versus what is going to small businesses, I don’t feel we are going in the right direction,” said Reimers, who identifies as politically independent.

Other findings from the poll included:

by / September 14
Inside Crosscut