Incumbent Pete Holmes is gunning for a fourth term, but first must get through challengers from the left and the right. 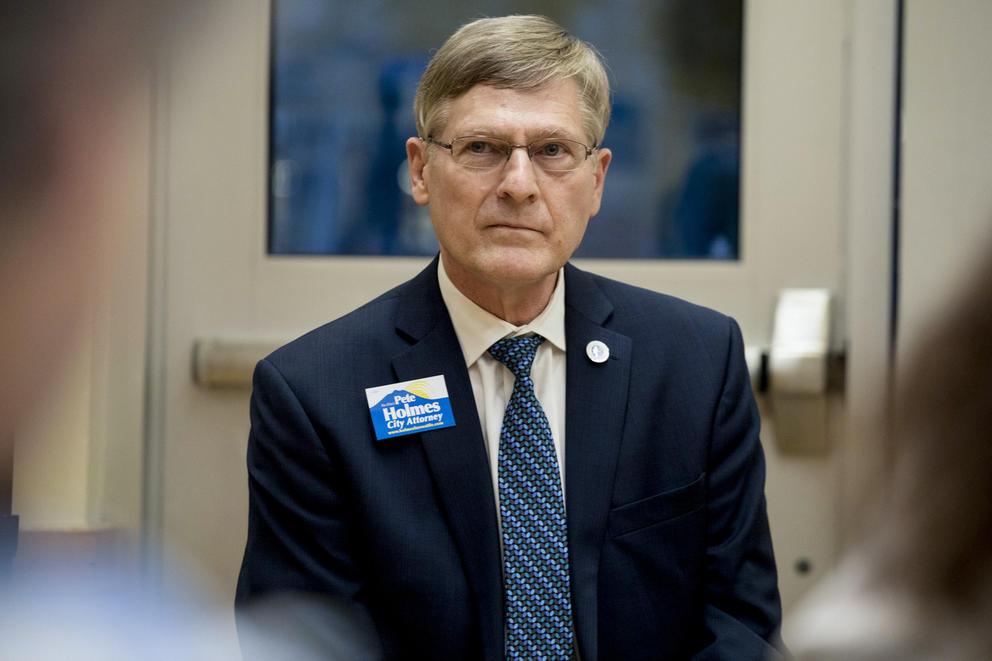 Three-term Seattle City Attorney Pete Holmes says there’s a real chance he could lose his primary on Tuesday, and he’s made peace with that.

He’s not counting on it and certainly not hoping for it, but Seattle’s longest-serving elected official — who briefly looked like he might coast to a fourth term — suddenly finds himself caught between two opponents representing opposite visions of what the city attorney’s office might be. If the two ends of Seattle’s political spectrum flock to either side of him, Holmes could fall through the middle.

“It’s a strange place for me to be,” said Holmes.

To his left, Holmes faces Nicole Thomas-Kennedy, a former public defender who’s running an explicitly abolitionist campaign. Her goal is to roll back the prosecution of those accused of misdemeanor crimes. She has called for stopping the eviction of homeless people from public areas and has echoed the language of protesters — including calling property destruction a “moral imperative” in the context of systemic racism.

To Holmes’ right is Ann Davison, an attorney who once served in the front office for the Seattle SuperSonics and who ran for Washington’s lieutenant governor last year as a Republican. She attacks Holmes as too soft on crime, too flexible on the city’s laws. Although she doesn’t use the term “broken windows,” the tenets of that police reform philosophy are clear in her campaign: that failing to address low-level crime, disorder or uncleanliness sows the seeds for more serious crime, like murder, rape and assault.

RESULTS: Check this page for updated primary results for the 2021 races.

Much of the progressive left has begun to coalesce around Thomas-Kennedy, who recently nabbed an endorsement from The Stranger newspaper. Davison, meanwhile, has garnered support from a more centrist coalition, including an endorsement from The Seattle Times editorial board. A recent poll pegged all three candidates as running roughly equal to each other, although more than half of likely voters said they were unsure.

For Holmes, who easily won his three previous elections, the question is whether he will slip between the gaps.

The City Attorney’s Office is unique in that it handles only misdemeanors and civil litigation. King County and its top prosecutor, Dan Satterberg, deal with the city’s felonies. Still, in the wake of last year’s protests, the stakes are high for this race. In choosing a new mayor, voters will dictate who they want as the city’s figurehead; the race for city attorney is a chance for voters to say what sort of criminal justice system they want.

As the final hours ticked toward the state’s filing deadline to run for office in the spring, Holmes faced scant competition and looked as if he might have an easy path to reelection. This caused hand wringing in progressive circles and among those who believed the city should rein in prosecution of misdemeanors.

Thomas-Kennedy was one of those hand wringers. She had recently stopped doing the daily grind of public defense in search of something with a more systemic lens.

“As a public defender, it's very individualized, it's completely atomized, each client at a time,” she said. “And it's just an onslaught that's never going to end, and so I wanted to try to find a way to make larger-scale change, and I wasn't quite sure what that was.”

She kept saying this to her friends while also bemoaning that Holmes wasn’t going to face any competition — until people started suggesting she run. And so, just hours before the deadline, she agreed.

In putting herself forward, Thomas-Kennedy decided early on she would run as an open abolitionist — a take-it-or-leave-it campaign. Being an abolitionist, she said, does not mean the legalization of all crime.

“I think what it means to be an abolitionist is an acknowledgment that the current system is making things worse and a commitment to finding solutions to our problems instead of continuing to reperpetrate this harm,” she said.

While certain approaches to domestic violence or DUIs could take time to change, she said, much of the office’s work would come to a speedy end — the prosecution of shoplifting, for example, in favor of referrals to food banks or other services where people could have their needs met. She predicted massive turnover among the office’s current staff attorneys.

For Thomas-Kennedy, the City Attorney’s Office represents an opportunity. Unlike in the jurisdictions of so-called progressive prosecutors around the country — Larry Krasner in Philadelphia or Chesa Boudin in San Francisco — the Seattle city attorney need not worry about felonies.

The message from Davison, an attorney who has run for local and statewide office several times now, is nearly the polar opposite. As Thomas-Kennedy faults Holmes for going too hard on misdemeanors, Davison said he doesn’t go hard enough.

“The [city attorney] needs to be restored to holding our agreed upon societal limits,” she said. “I see our laws as reflections of our city's values, and so those laws are there to mean something to people who live here. And when that is chosen to be looked away from, then the rest of society is dysfunctional.”

Davison runs her own private law practice, which focuses on civil law related to sports, business and contracts. She’s also an arbitrator.

Much of Davison’s campaign material invokes murder, rape or assaults — all felonies handled under a different office. But her point, she said, is that low-level crime leads to more severe crime. And so, while she acknowledges the city attorney has no authority to prosecute felonies, the city attorney, in her view, should be held responsible in an indirect way.

“Quality of life” crime “permeates our senses and it tells us that there's a level of neglect all throughout the city, and it affects us,” she said, “and then it starts to affect public safety issues, because we invite an increase in severity and frequency.”

The theory is an old and highly controversial one, popularized in New York City as a “broken windows” approach to law enforcement. Davison doesn’t use that term, however. “That theory gets a lot of flack, I think, and I don't honestly read about theories,” she said.

Holmes criticizes both Thomas-Kennedy and Davison, first of all, for what he says is their lack of experience. In fact, it’s his experience that spurred him to seek a fourth term when he was previously unsure. He decided to run again after Mayor Jenny Durkan announced she would not go for a second term.

“Frankly, that’s been Seattle’s biggest problem — our inability to elect a mayor to two successive terms,” he said. For that reason, consistency in his office is doubly important, he said. “To inject further disarray into City Hall is really just to kind of give up on City Hall,” he said.

Holmes’ position between Davison and Thomas-Kennedy means he must defend his approach as well-balanced — neither the soft-on-crime portrait of him from KOMO’s television special Seattle is Dying, nor the “mean prosecutor.” Despite any concerns about his election night showing, Holmes still believes his approach represents “the progressive center and I believe that that reflects Seattle mainstream values.”

When it comes to the prosecution of misdemeanor crime, he pointed to recent efforts to set up a community court in Seattle in which people may have their misdemeanor charges dismissed and be able to connect with housing, employment and drug services.

At the same time, he argued that ceasing to prosecute misdemeanors will result in havoc between the city and county and that it’s impossible to stop some prosecutions but not others. As is the case in other races up and down the ballot, the competition for city attorney is, in part, about the value of plodding change versus something more drastic.

“A centuries old and slowly evolving criminal justice system is that proverbial tanker on the ocean, right?” Holmes said. “To turn it takes time, and I submit that I have been able to demonstrate the power of prosecutors, who have the sole discretion on criminal charging, to make wise data-informed policy decisions.”

Two out of the three will advance to the general election. Depending on which two, the debate leading up to November will be vastly different: Is Seattle too forgiving or not forgiving enough?