Many Washington state educators feel the hot-button term is being unduly conflated with teaching anything about race and racism. 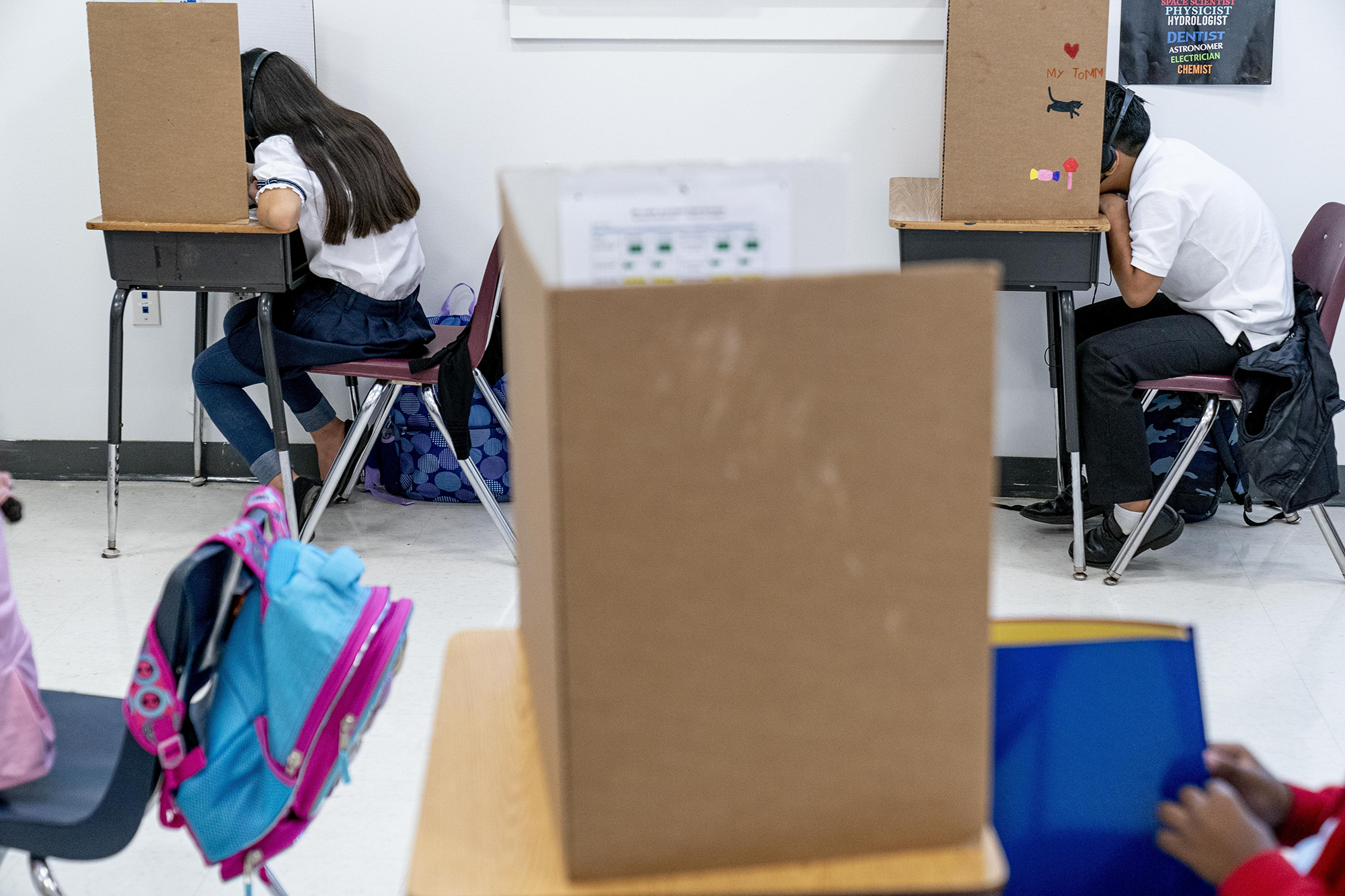 In this Sept. 18, 2020, file photo, students work in class in Washington. In response to a push for culturally responsive teaching that gained steam following the police killing of George Floyd, Republican lawmakers and governors have championed legislation to limit the teaching of material that explores how race and racism influence American politics, culture and law. (Andrew Harnik/AP)

Unlike in previous years, instead of kicking off this year’s English literature class with reading, Mark Gardner plans to start the year with writing. Gardner, who teaches English at Hayes Freedom High School in Camas, is changing strategies because of the political debate over a concept called critical race theory.

While school districts insist that critical race theory is not being taught to students, parents throughout Washington and across the nation have been coming to school board meetings, such as this one in Camas, to protest discussions of racism and inequality that they see as harmful to their kids.

In the past year, the fight against it has become a rallying cry for some conservative politicians and pundits, including former President Donald Trump, who banned it from being included as part of federal diversity training. It has also come up in school board election races throughout the state, including in Richland, Spokane and Seattle.

Many educators and parents cringe at that characterization of what it means to teach about racism today. The term critical race theory is being used as a cudgel to lump together everything the right dislikes about their more liberal neighbors and institutions.

“Ethnic studies work, anti-racism work, you know, decolonizing curriculum work, everything right now is being lumped under CRT, and kind of the broader national dialogue,” said instructional coach Terry Jess, who has taught social studies in the Bellevue School District.

As Jess points out, the term is being used against anything that acknowledges or prioritizes education around racial equity or racial justice.

Teaching about the history of race relations and racism is important to Washington voters. In a recent Crosscut/Elway Poll of 400 registered voters in Washington, 83% agreed or strongly agreed that slavery and the history of race relations are an important part of American history and should be taught as such in the schools. Eleven percent disagreed.

Traditionally, the term critical race theory was coined as an academic theory developed by legal scholars that doesn’t limit racism to just individual acts of prejudice and bigotry. Instead it focuses on the concept of race as a social construct, the ties between social inequality and race, and the idea that existing systems and power structures, such as government and laws, have been built to resist change, including changes meant to fight racism.

K-12 educators, including those who focus on anti-racism and ethnic studies in the classroom, say these concepts are not generally covered in public school classrooms. However, conservative pundits recently started using the term critical race theory to tie its tenets to school district efforts to incorporate classroom teachings about race and address a lack of equity among students, including teaching about concepts of privilege.

Those who call for the end of teaching of critical race theory in schools say they object to the idea of teaching K-12 students that systems of power favor white people.

“We need to encourage people to love one another. To love your neighbor as yourself. That’s for families to do,” said Liv Finne, director of the Center for Education at Washington Policy Center, a think tank that has denounced critical race theory. “Of course they should teach that. But they shouldn’t teach that one group of people deserves hate in this country.”

“It teaches Black and Hispanic and poor children, ‘You are in a racist society; you can’t hope to get ahead,’” she said.

Not surprisingly, many disagree with Finne’s assessment.

Many teachers say that would be a mischaracterization of what’s being taught in the classroom and that the fear of “critical race theory” could have a chilling effect on discussions of slavery and civil rights during U.S. history classrooms, or on discussions of books by authors of color.

Literature “is about looking at human experience, a key concept of literature is that it gives us perspectives beyond our lived experiences. And recognizing that people experience the world differently from others, through no fault of their own and no fault of others,” said Gardner, the high school English teacher in Camas.

“It worries me about our capacity to develop empathy, to see the world differently,” he said.

Jesse Hagopian, who teaches ethnic studies at Seattle’s Garfield High School, said concepts of systemic racism and white supremacy should be discussed even more in the classroom, especially as students come to class with questions about the inequality they experience and see.

“Critical race theory teaches how racism is not just an individual problem of people saying bigoted things, but it’s an institutional problem. There are systems that perpetuate racism. Those insights are important for our kids to discuss,” said Hagopian, who has also been a leader in social justice movements, including Black Lives Matter at School.

What the right doesn’t want to acknowledge, Hagopian noted, is that young people are bringing these conversations to the classroom, often without any prompting from their teachers.

The debate in Washington state

The national debate over critical race theory has led lawmakers in eight other states, including Idaho and Texas, to ban the concepts from being taught in schools.

While that is not happening in Washington state, some critics and parents here tie critical race theory to a recently passed law, Senate Bill 5044, which requires school staff and board members to take part in diversity, equity and inclusion training.

The required training includes learning about different groups and backgrounds, eliminating barriers that prevent full participation of individuals and groups, and creating efforts to ensure full access to engagement and participation in activities and opportunities. The training is under development by the Washington State School Directors Association and the Professional Educator Standards Board.

The law doesn’t mention critical race theory or classroom instruction. But Finne said teachers would naturally start incorporating the concepts into the curriculum.

“If you brainwash the adults in a theory that’s not been proven, they’ll be teaching the kids,” she said.

Finne argues in favor of school board stances such as one passed by the Chehalis School District, which explicitly states that students will not be taught that people are “guilty or innocent” or less capable than others due to their race.

But Tim Garchow, executive director of the Washington State School Directors Association, said the bill is focused not just on race and ethnicity, but also on addressing opportunity gaps in multiple areas of inequity, including special education and low-income families.

“CRT got confused with the DEI training requirements for adults,” Garchow said.

How are districts responding?

Garchow said WSSDA encourages school boards to listen to parental concerns, and also explain what districts are trying to achieve with equity.

“In its simplest form, education equity is saying that different students have different needs, and school districts should be meeting each child’s needs individually,” he said. “My advice to [school board members] is that there are too many leaders in the world talking about what they are against. So, speak on what you stand for. Rather than go point-counterpoint, rather than statements about what they’re against, speak about what they are for.”

In response to parent concerns, some districts have released statements saying their equity training does not vilify individuals because of their race. But Jess thinks that approach can backfire and reinforce the discomfort about talking about race.

“I also don't want administrators to completely dismiss it and say, ‘Oh, no, CRT… has nothing to do with what we're doing in school. It's just this grad level thing,’” he said. “I think that's a misconception as well.”

The influence of the social construction of race, the fact that racism exists and isn’t an individual issue, that is embedded everywhere, Jess said.

“All of these things have influenced a lot of how we look at systemic racism,” he added.

Effect in the classrooms

Gardner, the Camas teacher, started looking up critical race theory after a school board meeting where multiple parents expressed concerns — because he didn’t know what the teachers were being accused of.

Gardner, who is white, said he and other educators fear parental pushback could interfere with the creation of a more inclusive curriculum.

“We read Raisin in the Sun, which is about racial covenants, and housing discrimination. It’s not critical race theory, it’s looking at policy and how it has impacted people of color,” he said.

He also acknowledged that the current debate is damaging in other ways.

Hagopian, in Seattle, said that, ironically, the discussion over critical race theory is driving more educators to become more interested in it and wanting to incorporate it into classrooms.

He said that those who demonize “critical race theory” and other discussions of racism are missing the point.

“The right is trying to frame anti-racist pedagogy as about shaming white kids or making them dislike their own families,” he said.

Hagopian said learning about anti-racism is not about shaming people for the past, but changing systems in the present and future.