The race between Nicole Thomas-Kennedy and Ann Davison will contrast vastly different approaches to criminal justice. 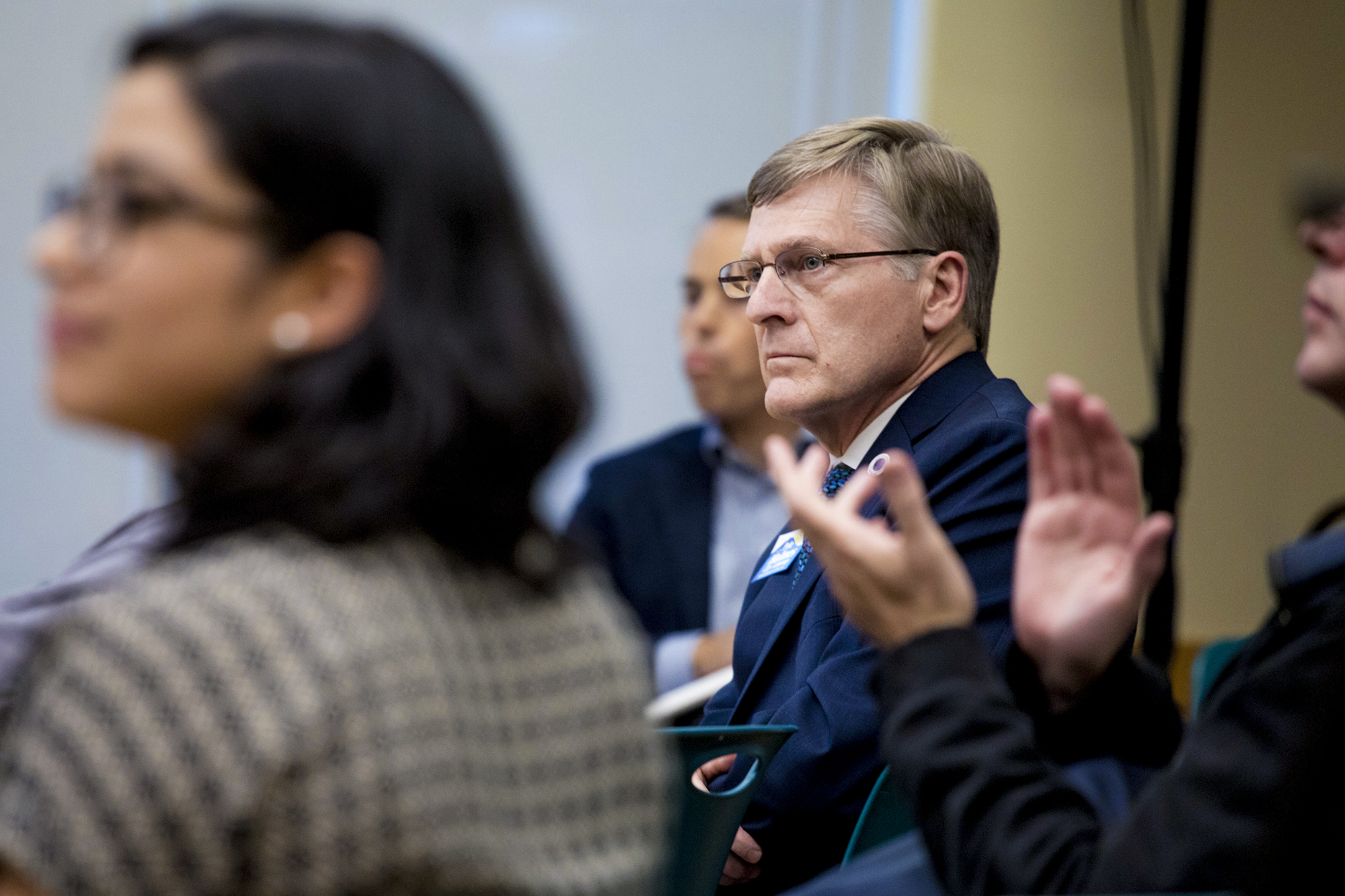 Seattle City Attorney Pete Holmes, a three-term incumbent, during a  candidates forum at Miller Community Center in Seattle on Sept. 20, 2017.

Three-term Seattle City Attorney Pete Holmes will not advance past the primary, a tectonic political upset that sets the stage for a stark and divisive race to succeed him as the city’s top lawyer.

"After two decades of public service to Seattle – the last 12 as your City Attorney – it’s time to acknowledge that my opponents will be advancing to the general election," he said in a statement Friday.

After ending election night in second place, Holmes’ hope for survival faded Thursday and Friday, as the ballots that were counted later shifted away from him and toward a progressive challenger, Nicole Thomas-Kennedy. This historically leftward trend of late ballots catapulted Thomas-Kennedy from third to first place. Ann Davison, who last year ran for lieutenant governor as a Republican, remains comfortably in second.

With 31% of the vote, Holmes trails Davison's 33% and Thomas-Kennedy's 35.5%. With few remaining ballots to be counted, Holmes’ time ran out. That means, barring extraordinary circumstances, Seattle will have its first female city attorney come Jan. 1.

In a city accustomed to deciding between varying shades of blue, the contest between Davison and Thomas-Kennedy will be one of clear contrasts and highlights just how divided the city is over issues of crime, public safety and criminal justice.

On the one hand is Davison, an attorney, arbitrator and neighborhood activist who ran to Holmes’ right, castigating him for being too soft on low-level crime — a decision that she’s argued leads to more felonies. Felonies are the purview of the King County Prosecuting Attorney.

Thomas-Kennedy, a former public defender and abolitionist, ran to Holmes’ left, arguing that his prosecuting attorneys are too aggressive against shoplifters and other misdemeanor defendants. Thomas-Kennedy has contended that the City Attorney’s Office, which does not handle felonies, is the perfect place to demonstrate an abolitionist approach to criminal justice.

"I am so amazed and grateful that over 50,000 people voted for abolition," Thomas-Kennedy said Friday.

With only limited campaigning, Holmes fell through the middle, just as he warned might happen in the days leading up to the election. Thomas-Kennedy was endorsed by The Stranger and Davison by The Seattle Times, which helped to stratify voters, who largely agree that something should change in Seattle’s approach to criminal justice, but disagree on what and how.

"After facing one candidate who considered my criminal policies too lax and another who considered them too draconian, it’s clear Seattle’s a city with fractured views, sadly reflective of the polarized politics that grips our nation," Holmes said.

After briefly appearing to have an easy reelection to a fourth term ahead of him, Holmes now faces an unceremonious end to a 12-year career in city government.

“He, I think, felt that both candidates were off on the fringes, and I think he felt he was in the middle,” said former Seattle City Councilmember Nick Licata, whose only endorsement this year was for Holmes. “When you think you’re fighting folks from the fringe, your natural tendency is to think you’re not going to have to try that hard, and I think he was caught flatfooted.”

A former bankruptcy lawyer, Holmes won his first election campaign in 2009, unseating incumbent Tom Carr on a message against the war on drugs and against the law-and-order rhetoric common at the time. After a rough transition to office, Holmes made good on some of his promises, announcing he would no longer prosecute marijuana possession and reducing the maximum sentence for misdemeanors by one day to avoid deportations. Prosecutions of many low-level misdemeanor crimes decreased under his watch.

“What he did well was he definitively turned the corner from Seattle Municipal Court being used as an avenue for mass incarceration to a marked reduction in the number of people facing criminal penalties for what are, at bottom, issues of desperation and appropriate care,” said Lisa Daugaard, director of the Public Defender Association. Daugaard endorsed Holmes’ early runs for office, before backing his opponent in 2017. She returned to endorsing Holmes this year.

When first elected, Holmes was thrust into a city on edge over its police department. An already-frustrated community exploded after a Seattle police officer shot and killed an unarmed Native woodcarver, John T. Williams, in the back. The American Civil Liberties Union and a slew of other community organizations called on the U.S. Department of Justice to investigate. The department agreed and, under Jenny Durkan, then a U.S. attorney and now the mayor, it found unconstitutional levels of force and patterns of bias.

What followed was a settlement agreement — or consent decree — negotiated to overhaul the department. Nearly 10 years later, the agreement continues and Holmes has been the city’s lead lawyer the entire time.

For Licata, Holmes was rational and pragmatic and a good partner for the city council. “Besides his taking the time to explain his positions, he’s tried to make himself sensitive to the needs of those folks who’ve suffered under laws that didn’t take into account income status or racial status that placed them at a disadvantage in the justice system,” he said. “But he’s also moderated that sympathy by recognizing that you still need some structure and some laws that are going to still protect people.”

Daugaard said that, for all the attention placed on so-called “progressive prosecutors” in Philadelphia or San Francisco, Holmes was doing those things when no one was watching. Stories about harsh prosecutions of the poor, as often cited by Thomas-Kennedy, still happen, conceded Daugaard.

But “if you did not live through [Holmes’ predecessors] Mark Sidran and Tom Carr, you just didn’t know,” she said. “Looking at the left critique, one should not erase that Pete did the thing that prosecutors in other cities are only now starting to undertake.”

At the same time, some were frustrated that Holmes didn't go further toward pushing for alternatives to prosecution, leaving void that opened him to a backlash from the right and left.

Former Mayor Mike McGinn often clashed with Holmes while the two were in office at the same time. He voted for Nicole Thomas-Kennedy.

The race to replace Holmes will be unlike anything Seattle has seen in recent memory — a pure distillation of the current political spectrum in direct response to last year’s protests.

Thomas-Kennedy decided to run against Holmes at the last minute, galvanized in part by the protests. She left her work as a public defender in search of “larger-scale change,” which led her to the City Attorney’s Office. As an abolitionist, she has described the position as a “luxurious” place to prove out its tenets; because the office does not handle felonies, she said, it gives space to build up support for criminal justice alternatives.

Davison, meanwhile, has cast Seattle as a de facto lawless jurisdiction under Holmes that fosters disorder and more severe crime. She has promised to “restore” the City Attorney’s Office to “holding our agreed upon societal limits,” the laws.

Whichever of the two wins, the City Attorney’s Office will look significantly different. In his statement, Holmes urged them to lean on the expertise of the staff currently employed there, although it's common for city attorneys to bring in their own staff once taking office.

"So, congratulations, candidates, and best of luck in the General Election," Holmes said. "With a city so ideologically splintered, whoever wins will certainly need it."