Can Seattle activists make it as 'career' politicians?

Activists found their power in the streets in the summer of 2020. Now they're looking to use it in the halls of power. 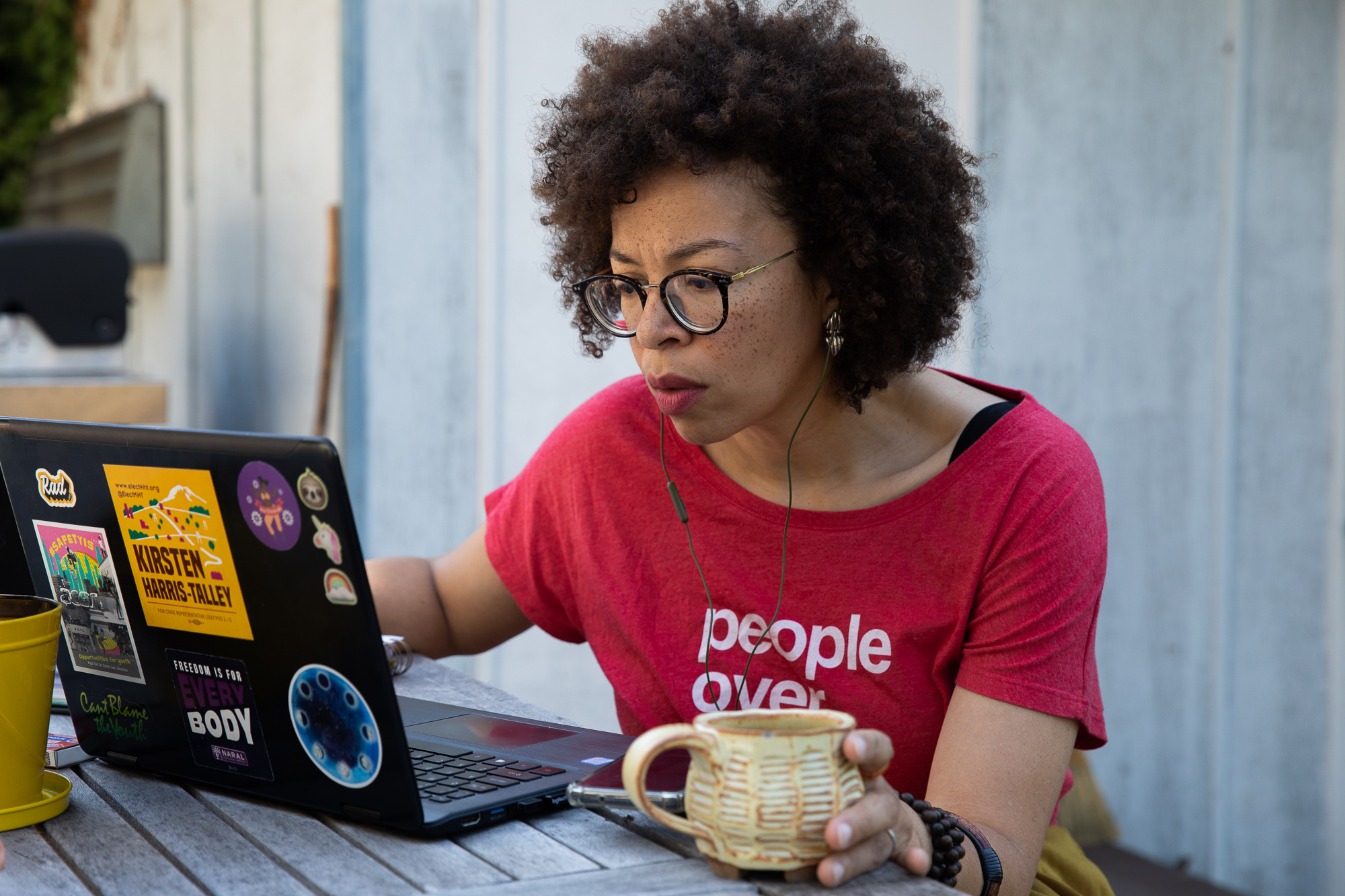 Kirsten Harris-Talley, then a candidate for state representative for the 37th Legislative District, works remotely with her campaign staff from her home in Seattle's Rainier Valley, July 15, 2020. She won the race for the seat in November and now serves in the Legislature. (Matt M. McKnight/Crosscut)

When racial justice protests arrived in Seattle early in the summer of 2020, they came not so much as a wave but a flood.

For months, city streets were inundated with Black Lives Matter demonstrations. Demonstrators captured several blocks in the commercial core of the city’s Capitol Hill neighborhood and forced the closure of a police station. Clashes with police were commonplace.

Calls for reform were broad, but one of them — that city leaders cut funding to the police — dominated. Activists pushed the Seattle City Council to trim the city police budget by 17%, a far cry from the 50% cut many sought. Now, some of those introduced to politics through that social movement are set to continue that work from inside the system, as elected officials. They may find useful models in three progressive activists who’ve put themselves on the ballot — two-time candidate for city offices Nikkita Oliver, Seattle City Councilmember Kshama Sawant and state Rep. Kirsten Harris-Talley.

“What makes activist politicians special is that the work they do before running for office tends to be for community good,” said Andrew Hong, who worked on the youth campaign team for Harris-Talley, D-Seattle, in 2020. “They see running for office not as something they achieve for themselves but as a means to access power to continue their activist work.”

The “activist work” Hong describes is chiefly organizing, building coalitions by meeting with people who may be willing to join in demonstrations or pressure elected officials. What binds these outsider, activist politicians together is that they are insiders in their respective communities. An activist politician is picked by their people, elected by their people, and, often, has never had to appeal to anyone but their people. For some organizers, the strategy on entering the electoral scene is not to find power within the establishment, but to draw on the community-based power they harnessed as activists.

This is the second story in a three-part series on youth in politics. Part one focuses on young progressive candidates for elected office in Washington.

“It’s important to have activism as an outside force pushing elected officials to understand the human experience,” said Seferiana Day, a political consultant at Upper Left Strategies, a Seattle-based political consulting firm oriented to progressive candidates. “It gets a little tricky when people get elected. It can be hard to pass policy. You can be on your own. Do you make friends? Do you compromise? Do you take a hard stance?" 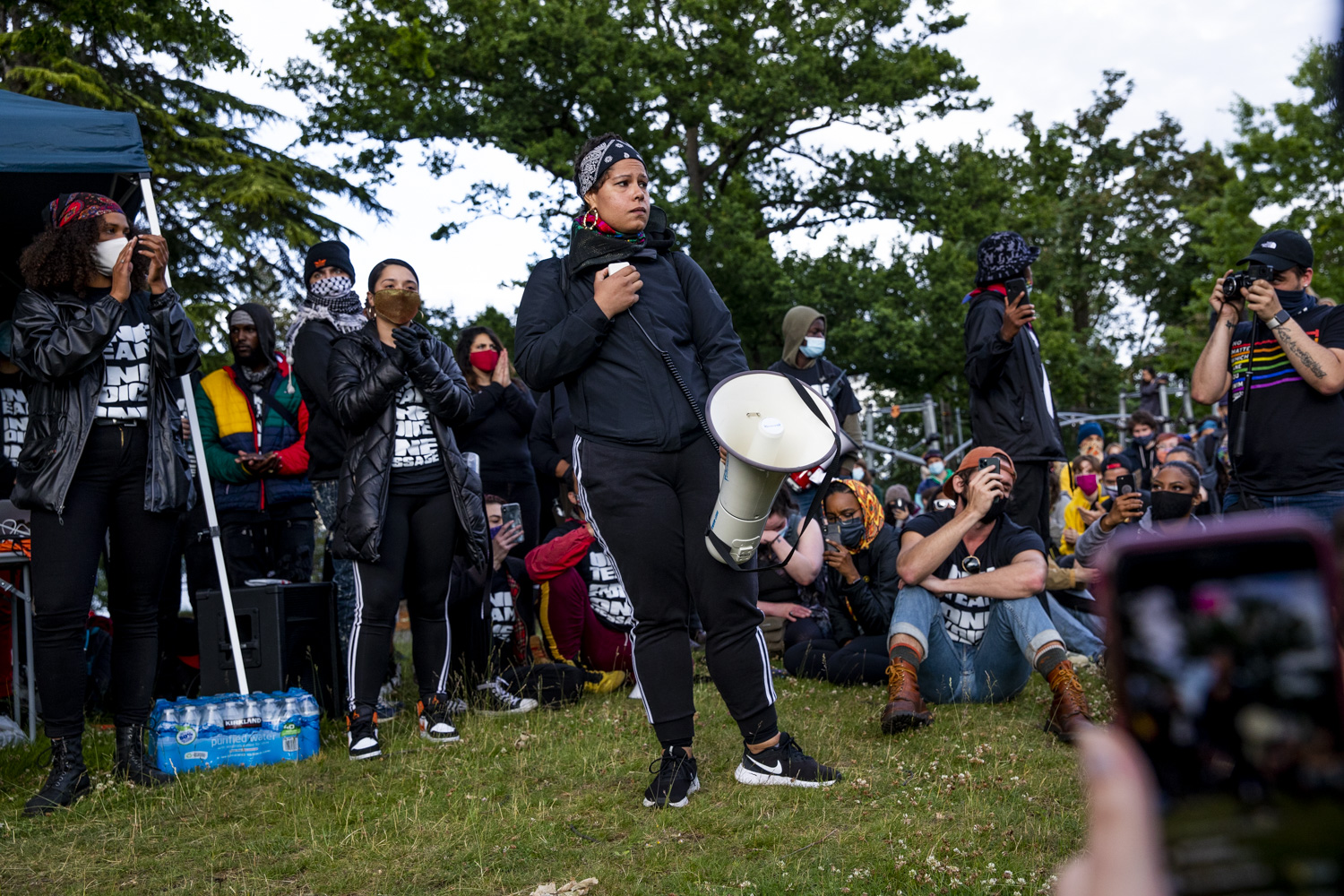 Nikkita Oliver addresses a crowd after a march in Seattle from Cal Anderson Park to Madison Park Beach on June 12, 2020. The goal of the rally in Madison Park was to educate “through stories, performances, speeches, experiences.” (Dorothy Edwards/Crosscut)

Nikkita Oliver addresses a crowd after a march in Seattle from Cal Anderson Park to Madison Park Beach on June 12, 2020. The goal of the rally in Madison Park was to educate “through stories, performances, speeches, experiences.” (Dorothy Edwards/Crosscut)

Oliver, the frontrunner for an open citywide Seattle City Council seat, wants to stick close to the grassroots if they win in the November general election. Oliver’s opponent, Fremont Brewing co-founder Sara Nelson, presents as a mainstream liberal, while Oliver has taken positions further to the left on almost every issue facing the city. Nelson did not make herself available for an interview.

Oliver said they are not looking to become a “career politician,” but, rather, a career community organizer.

“A lot of folks run for office thinking about the terms to come and not the term that they're in,” said Oliver, who narrowly lost the primary for Seattle mayor in 2017. “More often than not, when folks from our communities get elected into public office, it seems like the office changes them more than they change the office.”

There is perhaps no more unyieldingly activist politician in Seattle than socialist Councilmember Kshama Sawant. While other council members politely engaged with protesters who showed up on their front lawns last summer in the heat of Seattle’s Black Lives Matter movement, Sawant could be found shoulder to shoulder with activists who were pushing against the police line with, as she described it, a mouth full of pepper spray.

Sawant said her campaign has thrown the political rule book out the window. Consultants warned her not to openly refer to herself as a socialist, but Sawant has since made a habit of opening any public address with a reminder that she is, in fact, a socialist. 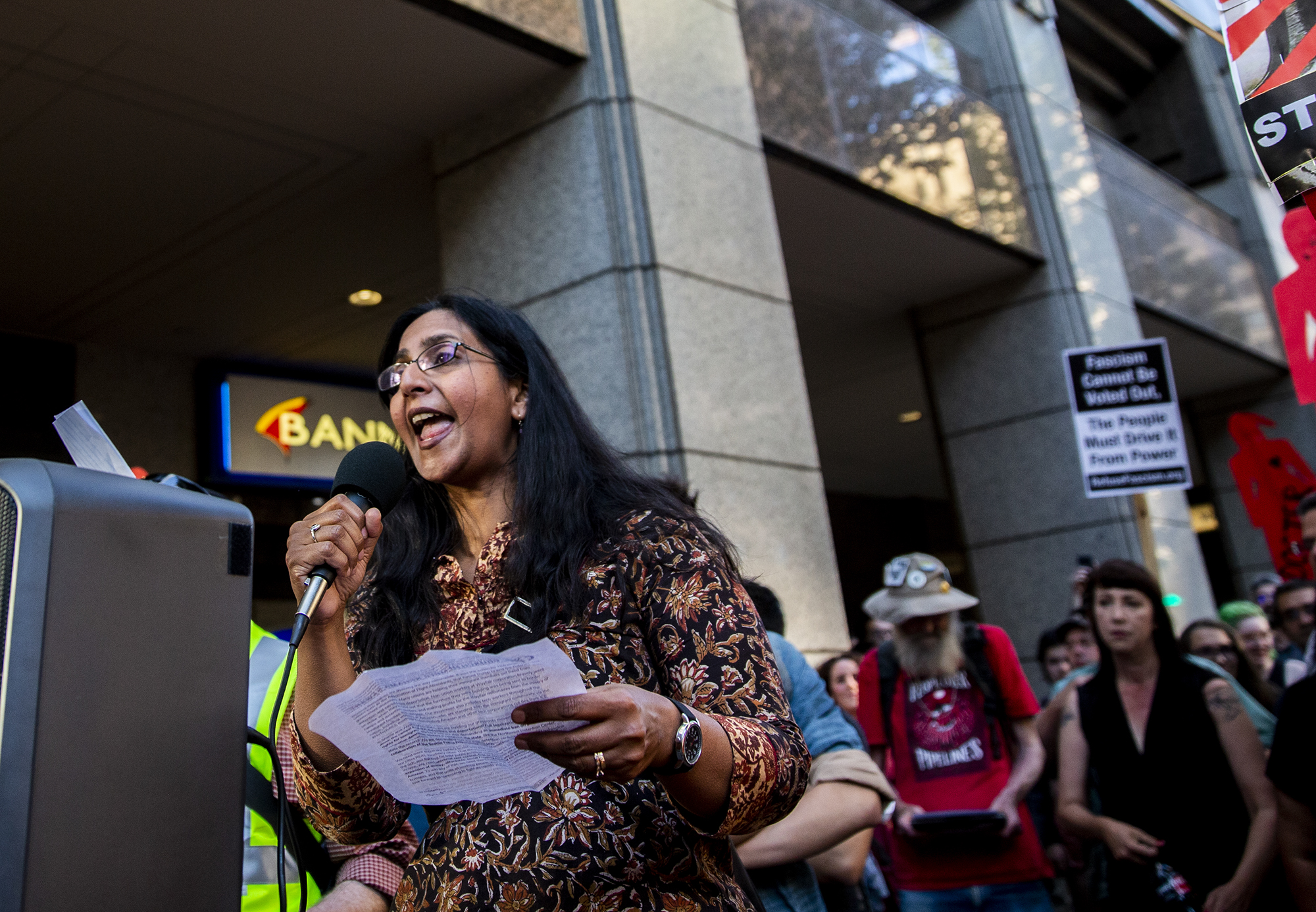 Seattle City Councilmember Kshama Sawant speaks during a rally outside of the U.S. Immigration and Customs Enforcement regional headquarters in downtown Seattle on Aug. 1, 2019. The rally called for a ban on private immigration detention centers. (Lindsey Wasson for Crosscut)

Seattle City Councilmember Kshama Sawant speaks during a rally outside of the U.S. Immigration and Customs Enforcement regional headquarters in downtown Seattle on Aug. 1, 2019. The rally called for a ban on private immigration detention centers. (Lindsey Wasson for Crosscut)

Sawant has held office for seven years, making her a seasoned politician and an institutionally advantaged incumbent when challenged in her previous two elections. Still, her base of radical, anti-establishment folks continues to go to bat for her, as they are before a potential recall vote.

“Nothing can be won in isolation, no matter how strong your ideas are,” Sawant said.

Elan Axelbank, a longtime Sawant supporter, argued that the council member has held true to her promise to represent, as an elected official, their socialist movement. In his conversations while canvassing on Sawant’s behalf, criticisms often arise over Sawant’s tone and ability to “play nice with others.” Axelbank described the critique as “ridiculous.”

“What Kshama’s not afraid to do is swim against the tide when necessary,” Axelbank said. “That’s why the Democratic establishment doesn’t like her, not because of her personality.”

In November 2018, the Seattle City Council approved a collective bargaining agreement with the city police officers union. Sawant was the only dissenting vote. She faulted the contract for what she described as a rollback on police accountability.

Taking stances against the establishment has not made Sawant any friends on the council. She said that when other politicians do not like her, she “wears it as a badge of honor.”

“In a regular job you want respect and friendship from your peers; you want a collaborative job,” Sawant said. “When you are an anti-establishment elected representative in the context of capitalism, you cannot think of it as a normal workplace. No, you are entering a battleground.”

Upper Left Strategies’ Day, whose consulting firm works with progressive candidates like state Sen. Joe Nguyen, D-West Seattle, cautions radical candidates against alienating voters and colleagues. She said a candidate's goal should be to bring people in. They should also refrain, Day said, from promising changes they can’t deliver.

“There's an aspect of really aspirational politicking: making promises or introducing policies that are not legally defensible or, like, don’t actually work,” Day said. “If you can’t actually get things done, are you really serving the community?”

Harris-Talley, the community organizer who now represents a South Seattle district in the Legislature, takes a more welcoming approach to compromise, one she says has earned pushback from the grassroots.

“What I found is that compromise didn't have to feel like I was giving something up, but that I was understanding more deeply another position and seeing it as additive to my view,” Harris-Talley said.

In 2017, Harris-Talley was briefly appointed to the Seattle City Council. She served for 51 days, and 48 of them were spent finalizing the city budget or, as she called it, “the Super Bowl of legislative work.” A $25 million tax proposal failed by one vote, a failure that resulted in the creation of a task force.

“What it took — a three-year process to have 10 times as much revenue at the end of the day — that was a good enough compromise that we made,” Harris-Talley said.

Harris-Talley said grassroots groups have pushed back over compromises. She said she tries to go back to the people who elected her and have what she calls “difficult conversations.”

Hong, who worked to put Harris-Talley in office, believes accountability is especially important in Harris-Talley's district, the 37th, where most residents come from communities that are usually cut out of the political process. The 37th District population is 20.4% Black, compared with 3.63% statewide, and 24.6% Asian, compared with 7.8% statewide.

“She’s doing her part in this movement, but unfortunately, the movement is not ‘Kirsten,’ ” Hong said.

The future of that movement is, of course, uncertain. Oliver has yet to win office, Sawant faces a recall campaign and Harris-Talley’s first taste of electoral power came from an appointment to city council rather than grassroots movement. But their supporters continue to be swept up with their movements. Harris-Talley still meets once a month with her “accountability council” — a group of community members gathered to critique her work. Oliver seems to have taken a group photo in every park across the city. Seattlites can’t enter a grocery store in Sawant’s council district without being asked to “stand with Kshama against the recall’s racist voter suppression.”

“Change has never started in the halls of power,” said Axelbank, the Sawant supporter. “It starts in the workplace and on the streets when the people demand it.”