Education benefit for active-duty military can be elusive

The Pentagon promises opportunities for education as part of enlistment. But availability of college classes is spotty as the perk gets slashed. 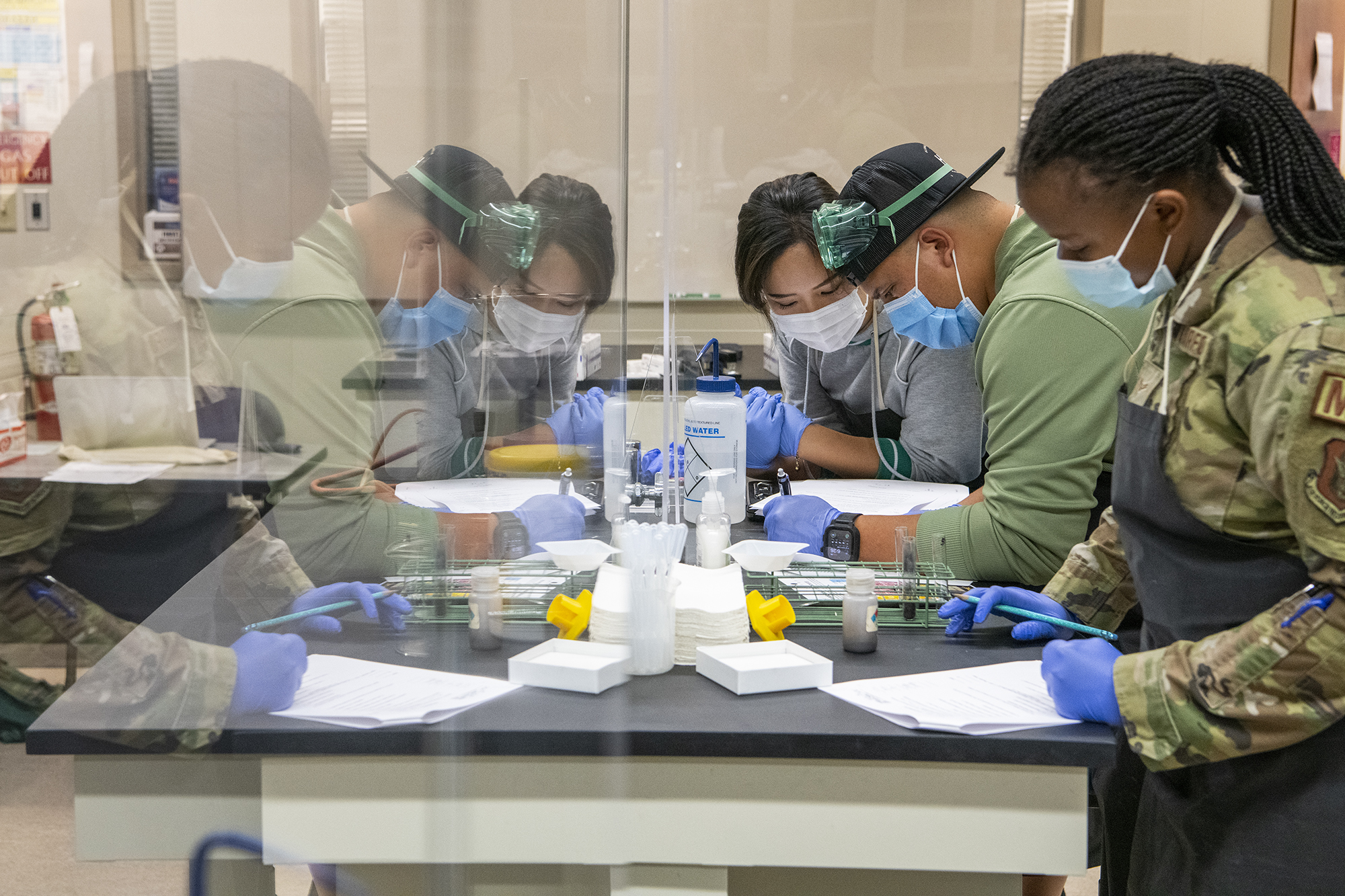 Danbi Kim, left, Army Cpl. Israel Vicencio and Air Force Reserve medical technician Joy Maina work together in a lab for chemistry class at Pierce College at Joint Base Lewis-McChord. The military has restricted or attempted to reduce funding for education for active-duty service members. (Katie G. Cotterill for The Hechinger Report)

Prepping for a deployment in the Sea of Japan that would leave them with some downtime, Sam Brenner encouraged the U.S. Marines under his command to take advantage of an online college education program made available to active-duty service members.

The Pentagon promises soldiers, sailors, Marines and airmen tuition money to take college courses while they’re serving, giving them a head start on credits they can use to rise up the ranks in the military or, later, in civilian life. Brenner, then a platoon commander in his mid-20s, thought it was a good idea to get “19-year-olds to read books and use their brains when they would otherwise have been wasting away.”

It didn’t work out. One education provider the military used didn’t serve the Okinawa base where Brenner and his Marines were stationed. Another couldn’t deliver classes on the USS Green Bay, the amphibious assault ship to which they were assigned.

“We were in a unique situation, but at no point did anyone ask what our situation was and point us in the right direction,” said Brenner, who left the Marines in 2018 and is now studying for a master’s degree in public policy at Northeastern University. “Getting Marines educated while on deployment isn’t a priority.”

While much of the attention to education benefits for service members focuses on veterans, most of the U.S. military’s 1.3 million active-duty personnel are also eligible for tuition assistance, a perk for which taxpayers spend nearly half a billion dollars a year.

“A lot of people, particularly in the Army, they’re joining for that education benefit,” said Mark Haskins, a retired Air Force colonel and executive director of the Joint Base Lewis-McChord campus of Pierce College, a community college system in Pierce County.

This story was produced by The Hechinger Report, a nonprofit, independent news organization focused on inequality and innovation in education.

“It doesn’t mean that they don’t also have a heart for service, but that education benefit represents a better life and greater opportunity,” he said.

Even as the withdrawal from Afghanistan serves as a reminder of service members’ sacrifices, however, education is often only spottily available to those on active duty. The military branches have tried to cut the benefit in recent years, even as use of the program rose during the coronavirus pandemic.

The Air Force attempted to slash its tuition benefit in 2020 as airmen idled by the Covid-19 pandemic signed up for more classes than expected, only to reverse course after complaints. The Navy restricted eligibility for education programs in 2019 after sailors — who the admiral in charge of personnel complained should have been more focused on their work — enrolled in college at such high rates that they drained the tuition assistance fund. The Army imposed its own restrictions on education benefits the year before.

That means that many service members — including medics and others in high-demand fields — have to wait to go to college until they leave the military.

“People sign up for the military to serve, and it’s great that they have these options. And it sucks that those options can be a pain to actually use,” Brenner said.

“We get really excellent education benefits,” he said. “We just don’t get to use them until after we’re out.”

Some 236,992 active-duty service members drew on the tuition assistance benefits, which max out at between $3,000 and $4,500 a year, depending on the service branch, between October 2019 and September 2020, a Department of Defense spokesperson said.

Where the Pentagon sees runaway costs to be contained, advocates for education see a huge opportunity to recruit motivated people, teach eager learners and produce workers with unparalleled experience and needed skills. And colleges and universities see a way to recruit students.

More than a third of the $488 million spent on tuition assistance for active-duty service members during the 2020 fiscal year went to one nonprofit and two for-profit online providers, according to Defense Department figures. American Public Education, a private, for-profit education provider based in West Virginia that runs American Public University and American Military University, drew about $96 million; Ashford University, a private, for-profit college recently acquired by the University of Arizona, $26 million; and the online arm of the University System of Maryland, $58 million.

The Defense Department is “not aware of” any further formal actions that would change tuition assistance benefits, the spokesperson said.

Strapped for enrollment, more public and private nonprofit colleges and universities are trying to recruit students from among active-duty military service members.

These could-be students “are looking for rigor, they’re looking for quality, they’re looking for an opportunity to engage with their faculty and their classmates,” said Michael Frasciello, dean of Syracuse University’s College of Professional Studies, who earned his associate degree while serving as a noncommissioned officer in the Air Force in the late 1980s and early 1990s.

Many active-duty students are the first in their families to pursue higher education and have gone to what Pierce College’s Haskins described as substandard primary and secondary schools. For them, the armed services represent a way up in the world.

“They are really the ultimate adult learners,” he said — organized, oriented toward specific goals and not interested in filling time.

Yet Haskins said he was surprised to learn that students in uniform were rarely completing an associate degree in less than five years.

To move more of them toward graduation more quickly, Pierce and other colleges have started to give academic credit for military training. Pierce has also changed the way it educates students who aren’t prepared for college-level courses, providing additional support instead of requiring remedial classes that don’t earn credit.

Pierce’s 500 or so active-duty students from Joint Base Lewis-McChord — the largest military installation on the West Coast — pursue a variety of associate degrees and other credentials. Haskins said a certificate program in personal fitness is particularly popular with soldiers hoping to lead exercise classes in civilian life.

Cpl. Israel Vicencio, an Army health care specialist on a medical track at Pierce College, hopes the education he’s receiving will set him up for a post-Army career as a doctor, nurse or physician assistant.

As their instructor in an introductory chemistry course looked on, Vicencio and classmate Joy Maina, an Air Force reservist, joked while they hustled to turn potassium chlorate into potassium chloride and oxygen using a beaker of water and a Bunsen burner. They quieted down when it came time to do the math explaining how much matter had escaped during the experiment.

Vicencio, 30, said he isn’t sure when he’ll leave the Army. With six years in uniform, he has four more to go on his latest enlistment. But he sees the tuition assistance benefits as part of his compensation.

“You’d be stupid not to use it,” Vicencio said.

Soldiers like Vicencio, who works at the large on-base hospital, often can apply their experience toward nursing or medical degrees, Haskins said. To serve frequently deployed students at the infantry-oriented base, the college has set up tracks that enable soldiers and airmen to complete two-year degrees in as few as four classes.

Staff Sgt. Shaei Rodriguez, a 23-year-old from Denver, connected with Syracuse University through an Air Force initiative that enabled him to spend a week on Syracuse’s New York campus. He was stationed in the United Arab Emirates at the time, and the visit made Syracuse a “no-brainer.” His goal is a bachelor’s degree by the time his enlistment is up in September 2022.

Syracuse charges active-duty military only the amount of tuition assistance they receive, keeping Rodriguez’s costs low. He would have been able to enroll entirely free, but he exceeded the maximum number of credits allowed by the Air Force by taking a particularly heavy course load. Rodriguez said he wants to make sure he graduates before he leaves the military.

Rodriguez is studying knowledge management, one of seven bachelor’s degree tracks offered to active-duty students at Syracuse; Frasciello said the bachelor’s in cybersecurity is the most popular of these.

The university expects to open programs oriented toward data analysis and project management, both in-demand fields, as well as a bachelor’s degree in policy studies for service members hoping to eventually work in the federal government.

As Frasciello sees it, active-duty education helps the military retain the “best of their best” by making life in uniform more rewarding.

Now deployed in South Korea, Rodriguez said the education benefits, for him, have worked out well. He got so much from a personal finance course that he keeps the textbook constantly at hand.

A college education, he said, is “something I’ve wanted to accomplish for myself.”