A seldom-used state law allows vigilante criminal prosecutions — and the state Supreme Court just opted to leave it on the books. 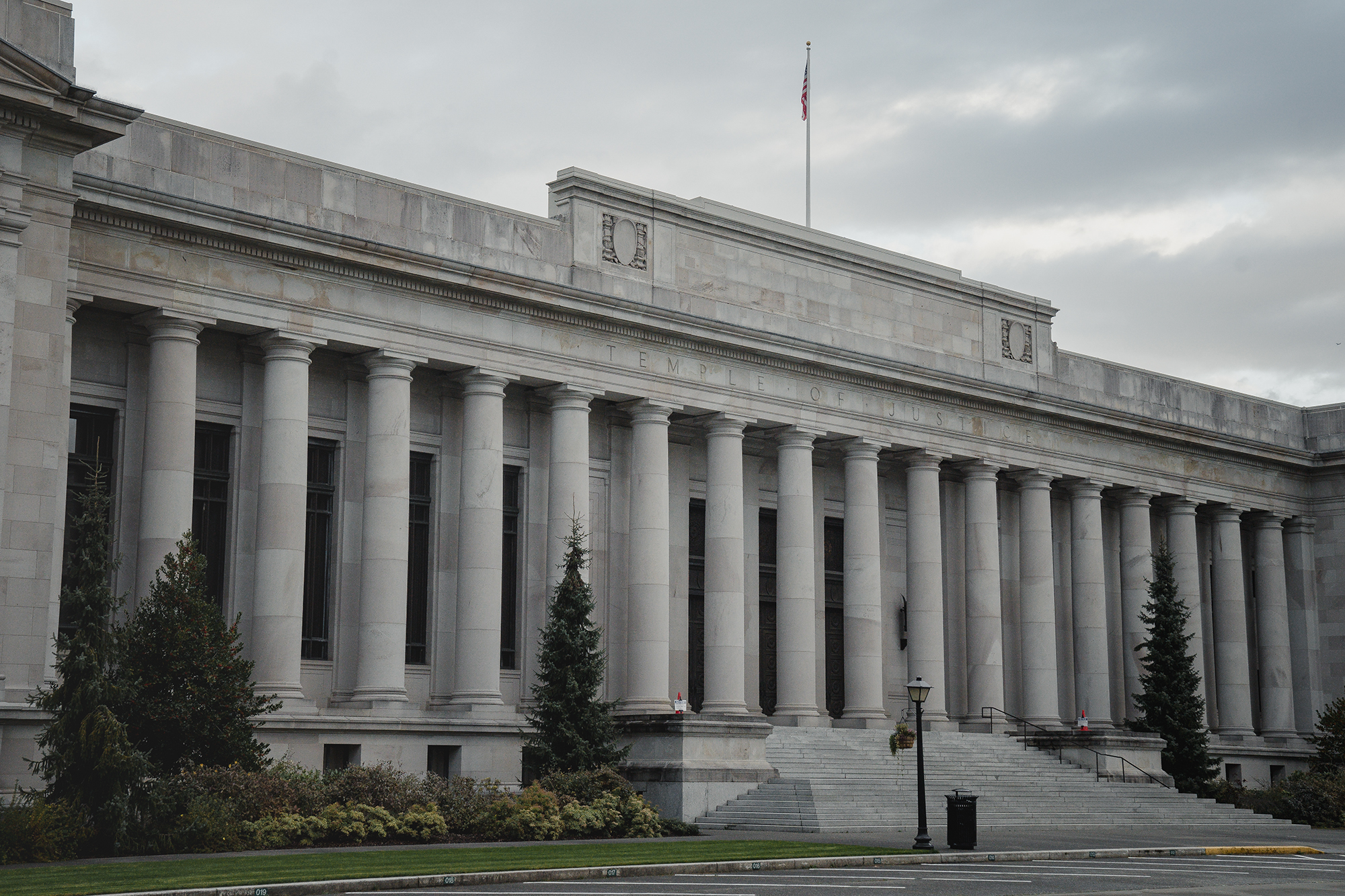 What do a couple of Spokane sheriff’s deputies who killed a loose calf, a state attorney general and a Mason County child services worker have in common?

They’ve all been targeted in citizen-initiated criminal prosecutions made possible by Washington state’s court rules recently described as “bizarre” by one state Supreme Court justice.

At present, Washington residents can try to bring criminal charges against anyone. Residents, in theory at least, can seek a court order forcing prosecutors to pursue charges or, if the prosecutor is unwilling, pursue a criminal case at their own expense. No judge has allowed a citizen-initiated prosecution to proceed in modern times, but that hasn’t staunched the flow of “citizen complaints” that opponents of the practice say are being used to harass and intimidate government workers and crime victims.

The state Supreme Court recently had an opportunity to eliminate citizen-initiated prosecutions when deciding a case brought by an Olympic Peninsula man attempting to file criminal charges against a Child Protective Services worker. In a split decision, the high court ducked the issue by choosing not to weigh in on the constitutionality of the frontier-era practice. Now, opponents are pushing the high court to void the court rule that allows for citizen prosecutions.

Although they’re also used by animal rights activists who say they have no other recourse when animal abuse goes unpunished, Loginsky said citizen prosecutions have been a favored and, occasionally, popular tactic among anti-government extremists or anyone interested in bullying. Loginsky, who has been pushing to eliminate citizen prosecutions for more than a decade, said complaints often target court-appointed guardians, judges and police officers. Washington Attorney General Bob Fergusson faced a slew of them in 2019 from activists upset over a gun control law.

The complaints rarely, if ever, result in an actual criminal conviction, and neither Loginsky nor anyone contacted for this piece was aware of any that have even resulted in charges since Washington’s modern criminal justice system was established. But, Loginsky said, the prosecutions still terrify government workers and victims of and witnesses to crimes.

The organizations representing prosecutors and lower court judges have asked the state Supreme Court, which sets the rules for all Washington state courts, to retire the rule. Loginsky said the change, which has previously been derailed by people who contend citizen prosecutions are a useful check on prosecutorial power, is long overdue.

“These actions can have significant impact on the target. They divert government resources. They cut into court time,” Loginsky said. But, she continued, “because it’s a court rule, the only entity that can repeal it is the court.”

The state Supreme Court opted not to consider the constitutionality of citizen prosecutions in an August decision related to citizen complaints. Mason County resident Thomas Stout had brought a complaint against a Department of Social and Health Services caseworker involved in a child welfare matter related to two of Stout’s children. He claimed the caseworker lied on two statements, and tried to prosecute her for false swearing, a misdemeanor.

On Oct. 3, 2018, one day before the statute of limitations was to expire, Stout filed an affidavit with Mason County District Court in an attempt to initiate a citizen prosecution. At a hearing weeks later, a judge dismissed the case, finding that, because Stout’s affidavit didn’t in itself initiate a prosecution, the statute of limitations deadline had passed. In the years that followed, Stout appealed that decision repeatedly, ultimately to the state’s highest court.

“When a prosecutor chooses to overlook particular crimes by particular people, [a citizen complaint] is one means by which a citizen is allowed to bring the matter to court,” Preble argued in court papers. Preble did not respond to interview requests.

In its Aug. 26 decision, the Supreme Court agreed that Stout’s complaint wasn’t actionable because of the statutory deadline. Two justices — Mary Yu and Sheryl Gordon McCloud — argued in a concurring opinion that the court should also have taken the opportunity to invalidate the court rule enabling citizen prosecutions, on constitutional grounds.

Washington is one of 11 states that allows for citizen-initiated criminal prosecutions, according to a 2018 survey conducted by the National Crime Victim Law Institute. Thirteen others allow for people to petition for a hearing before a grand jury, which could then bring charges. Researchers with the institute acknowledged that some states greatly restrict the application of those laws.

The court rule allowing citizen prosecutions crosses lines written into Washington’s constitution separating the judicial and executive branches of government, Yu said. Judges cannot decide whether charges should be filed — that power rests with the executive branch, with prosecutors — but would need to do so for a citizen prosecution to proceed. Yu described the rule as “unconstitutional on its face.”

That attempts at citizen prosecution are almost certain to fail is little comfort to those subjected to them. Loginsky pointed to a 2012 matter in which a Wahkiakum County man accused of sexually assaulting a boy tried to use a citizen complaint to force the boy to undergo a “lie detector” test. An appellate court panel denied the request; the man was ultimately sentenced to 3½ years in prison for the assault.

Describing citizen prosecutions as “a wasteful pretense,” Yu noted that the caseworker targeted by Stout spent three years defending herself against criminal charges that were never brought.

“The citizen complaint rule regularly subjects targeted individuals to putative criminal actions based on fatally flawed citizen affidavits that are legally barred, factually baseless, or both,” Yu said in the concurrence. “Before these actions are inevitably dismissed, the would-be defendants, third parties, and the general public are forced to incur substantial, and in some cases irreparable, harm.

“This is an unjustifiable price to pay for a facially unconstitutional, judge-made rule.”

For animal rights attorney Adam Karp, citizen prosecutions are one of the few legal tools available to him in many instances of animal abuse. Karp, a well-regarded Bellingham attorney and national leader on animal law, regularly files citizen criminal complaints in an effort to launch prosecutions.

In his area of legal practice, Karp said, citizen prosecutions solve a problem in the law. Generally, the only person who can bring a civil claim after an animal is abused is the animal’s owner, because, under law, they are the party that has been harmed. When the abuser is the animal’s owner, or when the owner is disinclined to respond to the abuse, there’s little legal recourse available other than citizen prosecutions.

“It allows cases that would otherwise fall through the cracks, due to prosecutors being overloaded or prosecutors being biased,” Karp said. While he is not aware of any, he said “there could certainly be cases where there’s political corruption or some type of misguided evaluation that leaves victims unredeemed, unvalidated.”

Karp guesses he’s filed about 10 citizen complaints, none of which has resulted in charges being filed. Karp attempted to initiate a citizen prosecution in 2006, after two Spokane County sheriff’s deputies shocked a loose calf to death in Spokane Valley. The complaint went further than most; a district court judge initially agreed that the criminal case could proceed before reversing her decision. A 2008 complaint against an Everett lab where a cynomolgus monkey was scalded to death and a 2016 complaint against those involved in the torture killing of a Centralia cat were similarly stymied.

Karp acknowledges that even if a judge ruled that a criminal complaint could go forward, it would be a “Pyrrhic victory.”

Prosecutors disinclined to bring charges on their own could dismiss the case, and, as far as anyone knows, Washington hasn’t seen a privately pursued criminal prosecution secure a conviction in more than a century. Karp nonetheless sees citizen-initiated prosecutions as useful in instances where authorities are not seeking justice. He said the system should be reworked so that prosecutions can actually proceed if a judge finds probable cause that a crime has been committed following a citizen complaint.

Such a system would open the door to abuse, said Hugh Spitzer, a law professor at the University of Washington who has studied the issue.

Describing citizen-initiated prosecutions as “Wild West stuff,” Spitzer said that, while private prosecutions have come in and out of vogue over the millennia, they are “a strange and inappropriate way of doing things in the modern world.” Even during the colonization of the western United States, officials usually were the ones initiating prosecutions, Spitzer said. In his view, Washington should not allow them.

“The concept of private prosecutions in criminal matters is weird,” he said. “You can do it that way, but the risk is that you get people who are on personal vendettas pursuing prosecutions.”

The Washington State Bar Association has called for the rule’s erasure, as has the organization representing judges most likely to have to deal with citizen prosecutions, the District and Municipal Judges Association. While no tally of attempts at citizen prosecutions has been put forward, Yu argued that they are too common.

“The record does not show (and I do not believe) that district court filings based on citizen complaints are so rare that we may disregard their harmful effects,” Yu said in the concurrence, offering her own view in the parenthetical. “To the contrary, there are strong indications that citizen complaints are far more common, and cause far more damage.”

The Supreme Court has been asked to reexamine the rule allowing for citizen complaints during an upcoming review of the court rules related to criminal cases, said Loginsky of the Association of Prosecuting Attorneys. She believes the court should follow the lead of the Legislature, which threw out the laws allowing for citizen-initiated prosecutions years ago, and remove the rule.

“The Legislature didn’t say, ‘This is really neater than peanut butter and we need to keep it.’ They got rid of it,” she said. “My fondest hope is that the court eliminates the rule."