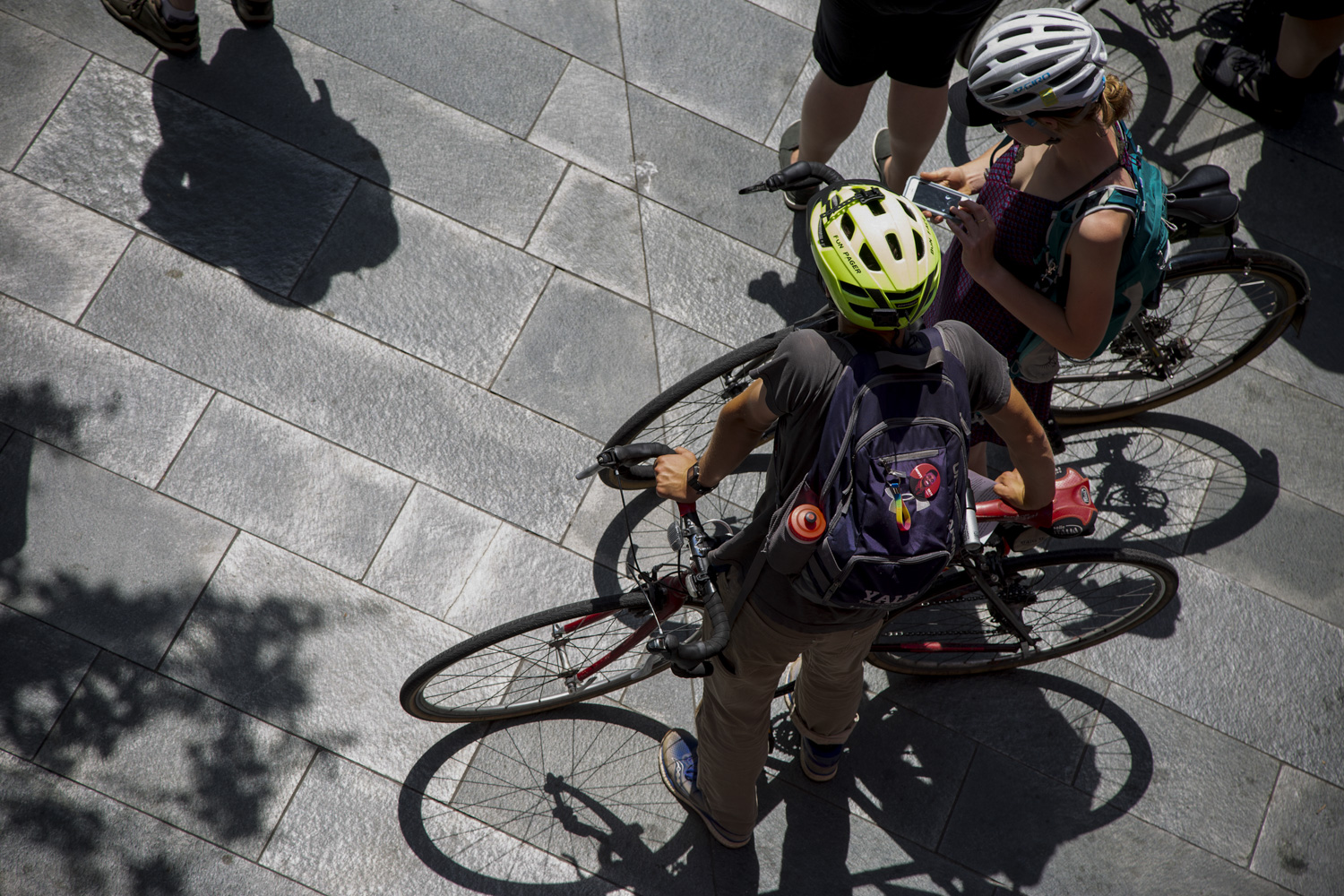 Bicyclists rally in front of Seattle’s City Hall during the Ride for Safe Streets in downtown Seattle, June 16, 2019. (Jen Dev/Crosscut)

Responding to concerns about inequitable enforcement of King County’s bicycle helmet requirement, members of the county’s Board of Health are seriously considering rolling back the decades-old law, with a vote expected as early as next month.

Several board members were explicit during a meeting Thursday in their desire to strike the law from the books, and none raised any clear opposition. At the core of their reasoning was the law’s disproportionate use against people of color and those experiencing homelessness, as well as questions about whether it was achieving its stated goal.

“The ordinance is outdated,” board member Dr. Bill Daniell said.

At the same time, members sought to make clear that they support and encourage voluntary helmet use and may replace the law with a resolution stating as much.

Board members began their reconsideration of the law amid new scrutiny of how it was being enforced. Last year, a Crosscut analysis showed that nearly half — and likely more — of tickets written under the law were given to people struggling with homelessness. This disproportionate use of helmet citations occurred even as bikeshare became popular in Seattle and King County — a rental service that does not come with helmets.

At the same time, Ethan Campbell of Central Seattle Greenways, a branch of the street safety group Seattle Neighborhood Greenways, found that Black riders were cited for not wearing a helmet at nearly four times the rate as whites.

While the law’s original intentions were good, “there just wasn’t as much thought about how, in practice, the law would be used and against whom,” Campbell said of its early 1990s enactment.

Campbell raised the concern, shared by others, that the police have used the law as a pretext to stop people of color and those experiencing homelessness. In fact, in 2019, a Seattle Municipal Court judge dismissed a firearms charge against a man living in a homeless encampment because it was obtained after police stopped him for not wearing a helmet.

The recent revelations around the law’s enforcement have spurred more bicycle advocates to push for its repeal.

“We do believe that helmets can add a level of protection, but we do not believe this should be a matter of law enforcement,” said Paul Tolmé of the Cascade Bicycle Club. Support for repealing the helmet law is new for Cascade, an influential bicycle advocacy organization in Seattle that favored the law’s enactment years ago. But, Tolmé said, the data on who’s targeted for enforcement has forced a reckoning among members.

The requirement that all adults wear helmets was approved in King County in 1993. In 2003, that law was expanded to include Seattle. At the same time, 17 cities within King County have their own requirements, which would not be affected by the actions of the Board of Health.

At the time the law was created, evidence suggested it accomplished its goals of increasing helmet usage. Fatalities and severe head injuries among cyclists decreased by as much as 20%, according to research from Harborview Medical Center.

But the law's usefulness today is unclear. In the Board of Health’s meeting Thursday, county staff suggested its impact was waning. In Seattle, enforcement was minimal; in 2019, Seattle police wrote just 118 tickets, despite record levels of ridership.

According to Campbell, the culture of helmet wearing has changed since the law’s original passage. “We have to remember that helmet use was essentially zero before the ’90s,” he said. While exact numbers can be hard to come by, Campbell said cities with and without helmet laws now both have high rates of helmet use.

Eliminating the law was one of two options under consideration by the board, which is made up of elected officials from both the county and King County cities. The other option would remove language regarding enforcement of the law, leaving the law in place but preventing police officers from issuing citations.

Jeanne Kohl-Welles, a member of both the board and the King County Council, was not yet committed to repealing the law, calling the issue “complicated” in an interview. Without a parallel public service push to remind people to wear a helmet, Kohl-Welles said she’s cautious about fully repealing the law. At the same time, she said, “I'm not willing to go along with things as they are now, where we would take the option of doing nothing, where disparities in enforcement continue.”

In a presentation to Board of Health members, staff proposed several ways the county could increase helmet usage without using law enforcement, including providing free or low-cost helmets to people who need them, host community education events and hire a bicycle safety planner at the county level.

The board could vote on the repeal and a resolution supporting helmet use next month.