Lost hikers rely on unpaid rescuers. That could change

Colorado is preparing to pay search-and-rescue workers. Could Washington be next? 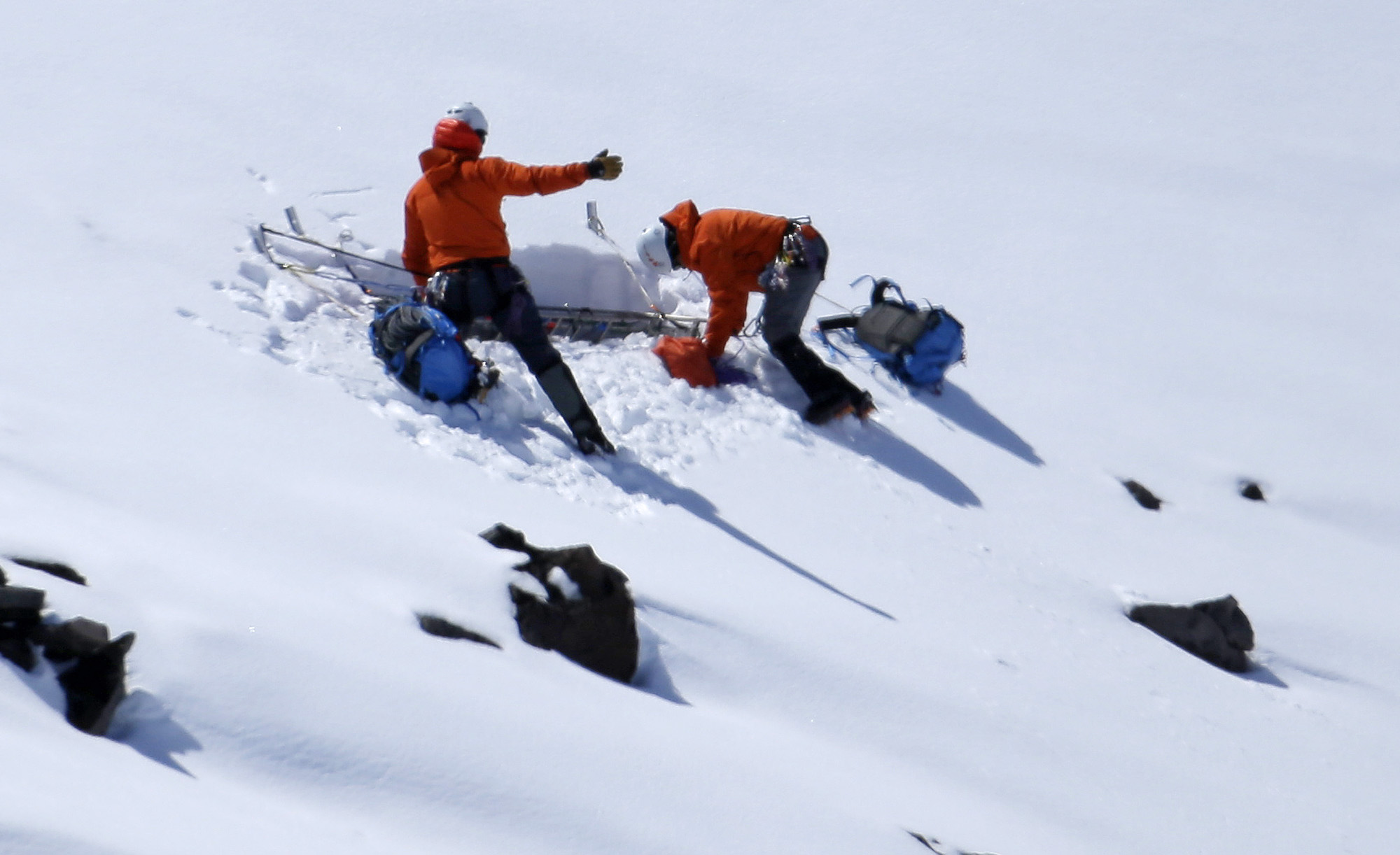 In this photo, taken May 15, 2015, from an Army Reserve Boeing CH-47F Chinook helicopter, Air Force pararescue specialists are anchored in the snow about 9,000 feet above sea level at Mount Rainier as they take part in a search and rescue training mission. Army Reserve soldiers and Air Force pararescue specialists were training to work along with National Park Service officials to offer assistance when climbers are lost or injured on the mountain. (Ted S. Warren/AP)

Hampered by an aging volunteer base, search and rescue leaders across the country say they’re struggling to keep up with a surge in calls for help.

“Being short on rescuers is a chronic problem for many areas,” said Jeff Sparhawk, president of the Colorado Search and Rescue Association. “Some teams are getting hit really hard.”

Colorado lawmakers say the problem is urgent, and a law enacted earlier this year could lead to a dramatic rethinking of the current model for search and rescue, also known as SAR. The effort could lead to greatly expanded state oversight of the work, and a major financial commitment to the field’s volunteers.

“This need has gone unaddressed in this state for far too long,” said Colorado state Rep. Julie McCluskie, a Democrat who sponsored the measure. It passed on a near-unanimous vote. “I was surprised to find out more hadn’t been done, and the state needs to start playing a role in funding, design and even standardization of how search and rescue works.”

This article was originally published by Stateline, an initiative of The Pew Charitable Trusts, on Aug. 9, 2021.

Many other states are facing the same strains on their teams, but Colorado appears to be the first to consider drastic changes to the current search and rescue structure. Lawmakers and operational leaders in the state say they hope they can create a more sustainable rescue program and potentially serve as a national model.

The vast majority of search and rescue teams in the United States are volunteer groups overseen by a local sheriff’s department. They pay for their own training, gear and travel expenses, often spending thousands of dollars a year out of pocket. They must have the flexibility to leave work or home on short notice for grueling, time-consuming missions. These demands have made it difficult to recruit younger members, many of whom lack the financial stability or flexibility to commit to joining a team.

Those problems have been exacerbated by the rising cost of living in many resort areas and a larger trend of declining participation in community and service organizations, search and rescue leaders say.

At the same time, since the pandemic began, Americans have been exploring the outdoors in record numbers — and increasingly finding themselves in trouble.

“The calls have been more challenging and more frequent,” McCluskie said. “The number of rescues has certainly increased.”

The new law directs state officials to assess by next January how search and rescue is conducted in Colorado. Lawmakers also committed $2.5 million annually to search and rescue expenses, and McCluskie thinks lawmakers are ready to invest in a different model, with the new money as a start.

The study will examine the viability of creating a full-time corps of professional rescuers under an existing state agency that could lead the state’s search and rescue efforts. For Colorado’s roughly 3,000 volunteers, it could create a structure of payment and benefits that makes participation more sustainable.

Lawmakers expect the published study to provide the contours of the legislation they will take up in the next session. They expect to consider compensating search and rescue teams for their training and mission time, providing them with equipment and reimbursing them for expenses. Legislators also could approve workers’ compensation, disability protections, and retirement and death benefits.

“Protecting the volunteers is hugely important,” said Chris Boyer, executive director of the National Association For Search And Rescue, a Virginia-based nonprofit. “Lawmakers have started to get the idea that these teams are not protected.”

“The mental and emotional strain we put people under is huge,” said Sparhawk of the Colorado Search and Rescue Association. “Our families don't know if we'll be home tonight or out on a rescue. We’re dealing with a severely injured person or a deceased person, or a family that’s having the worst day of their lives.”

The study also will examine ways to increase coordination of search and rescue efforts among local, state and federal agencies. And it will consider a state role in standardizing the training and licensing of volunteers, which now happens at the county level.

Currently, search and rescue teams in Colorado receive some funding through the sale of hunting and fishing licenses, as well as other outdoor activities, but that amounts to only about $700,000 a year.

Colorado search and rescue leaders hope that offering some pay and benefits will enable more volunteers to join.

“The younger folks with strong knees and strong backs that we need, they’re working three or four jobs just to live here,” Sparhawk said. “If we can alleviate the financial burden, they would have a better ability to volunteer their time.”

Colorado is one of many states with overwhelmed search and rescue teams. Many teams were hit hard by the pandemic, as COVID-19 fears kept older volunteers on the sidelines and lockdowns limited the ability to train new members. Other members who lost their jobs no longer had the financial resources to volunteer. And as people flocked to the outdoors, some teams received record numbers of rescue calls.

“Overall, we’re down on recruiting and new members,” said Bill Gillespie, president of the Washington State Search and Rescue Volunteer Advisory Council. “It’s been an uphill battle. [Rescue calls] are running a little bit ahead of where we’ve been traditionally, and the severity of injuries has gone up. We’re going to have to make some changes.”

Gillespie said two Washington counties have consolidated their search and rescue operations, and he wants to see more groups consider joining forces, because not every county can support its own dog team or off-road vehicle unit.

“We have this big battle to get the public to understand we aren't paid. We do this all on our own,” he said. “People spend thousands of dollars each year, take time away from family and time away from work.”

In Michigan, a tourist boom has taxed local public services, including search and rescue, in rural areas.

“Search and rescue is something that can take a tremendous amount of community resources, time and personnel to accomplish, and at the same time you have thousands of other people who might need emergency services during that time frame,” said Michigan state Sen. Ed McBroom, a Republican.

McBroom proposed a bill that would allow local governments to impose an excise tax on short-term rentals, with revenue going to support public safety programs, including search and rescue teams. Lawmakers are still working out details, including the tax figures and how much funding they would bring in, but McBroom hopes to have something in place before next year’s summer tourist season.

Boyer, with the national search and rescue group, said few other states have taken up legislation to bolster their rescue efforts. But as lawmakers become increasingly aware of the problems facing the current system, Colorado officials and rescuers hope they can create a model for others to follow.

“What we're trying to do has not really been done anywhere,” Sparhawk said. “How are we going to change the structure, so this makes sense long term, so this is a sustainable situation?”