With firefighting resources strained and burning harder to contain, many face last-minute changes or cancellations to outdoor adventures. 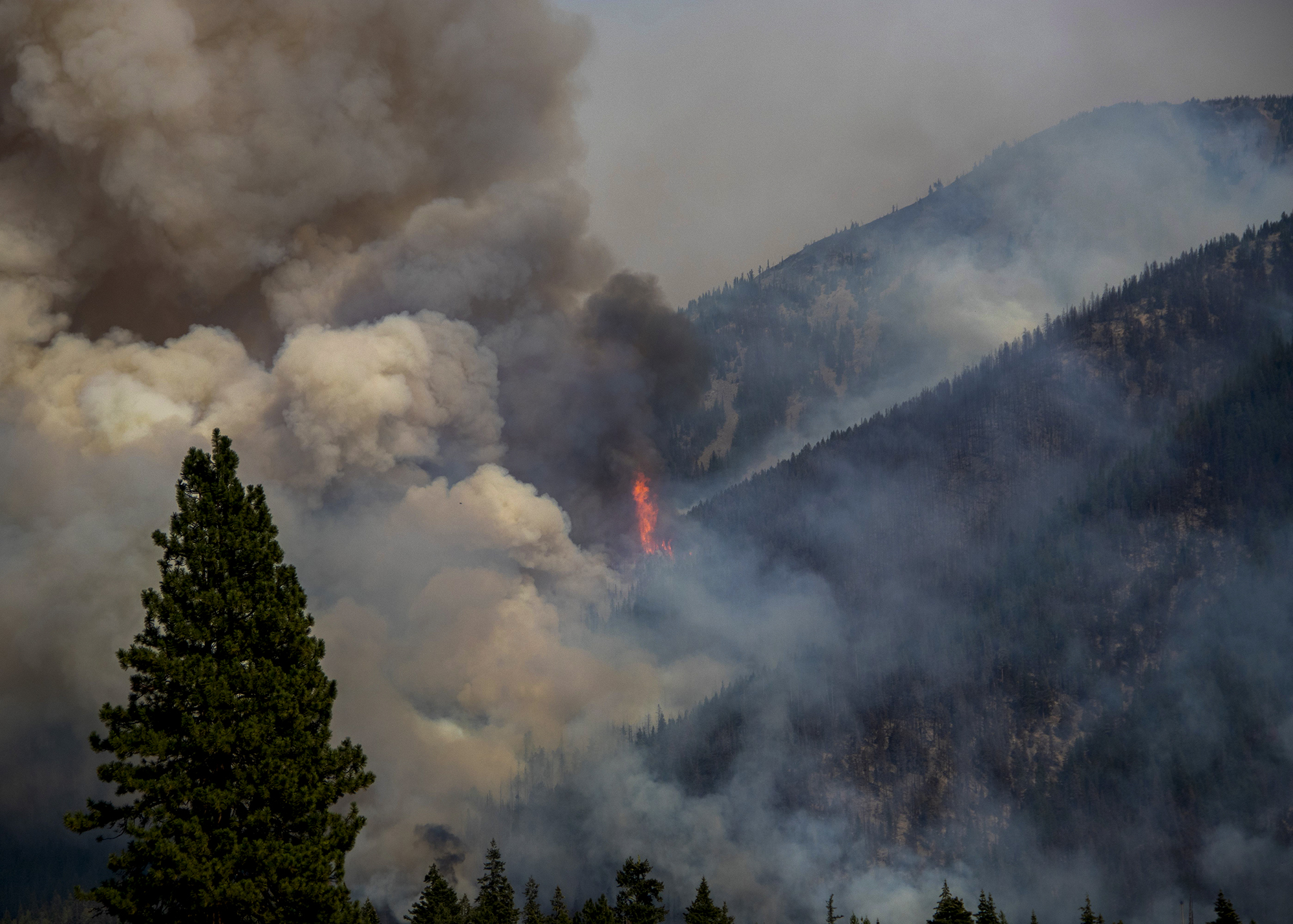 Around Labor Day each year, the federal Bureau of Reclamation increases water flows from the Rimrock Reservoir in Yakima County while decreasing water flowing out of reservoirs in the upper Yakima Valley Basin.

The “flip-flop” is done to improve spawning salmon’s habitat and secure irrigation supply. But there’s also a benefit to humans: The increased flows create ideal whitewater rafting conditions for the Tieton River, attracting thousands to the area over several weeks each September.

But when the Schneider Springs Fire, which has spread to more than 133 square miles of forestlands northwest of the Yakima Valley, closed recreational lands nearby, guides and rafters were uncertain the Tieton River rafting season would happen this year.

On Thursday, rafting guides celebrated when the U.S. Forest Service reopened several recreation areas closed during the wildfire, including the Tieton River.

Wildwater River Guides in Peshastin started its twice-daily trips on Friday and they will continue through Sept. 19. The rafting trips were the company’s first on the Tieton River in two years. Like other rafting companies, Wildwater River Guides limited or canceled trips that required extensive travel due to the COVID-19 pandemic.

“It's pretty nice, especially with how last year was, to be able to offer these trips and not have to do all the refunds,” owner Lance Reif said.

As active wildfire seasons become much more the norm and less an anomaly in recent summers, the threats to recreation, agriculture, communities and people in Eastern Washington have grown as well.

Active fire seasons in the Pacific Northwest — and across the U.S. — have also drained firefighting resources, making it more difficult for responders to contain new fires quickly, causing more of them, such as Schneider Springs, to grow.

While those booking rafting trips on the Tieton River will likely still get to enjoy their trips, others aren’t so fortunate. In California, all national forests were closed last week, forcing many to forgo plans during the busy Labor Day weekend and for the next several weeks.

Given rapid developments with wildfires, good and bad, cancellations or changes to scheduled trips shouldn’t be ruled out entirely, said Liam Elio, operations manager for Orion River Rafting in Leavenworth.

“We’re not blindly celebrating,” he said. “But we’re stoked to get some good news.” 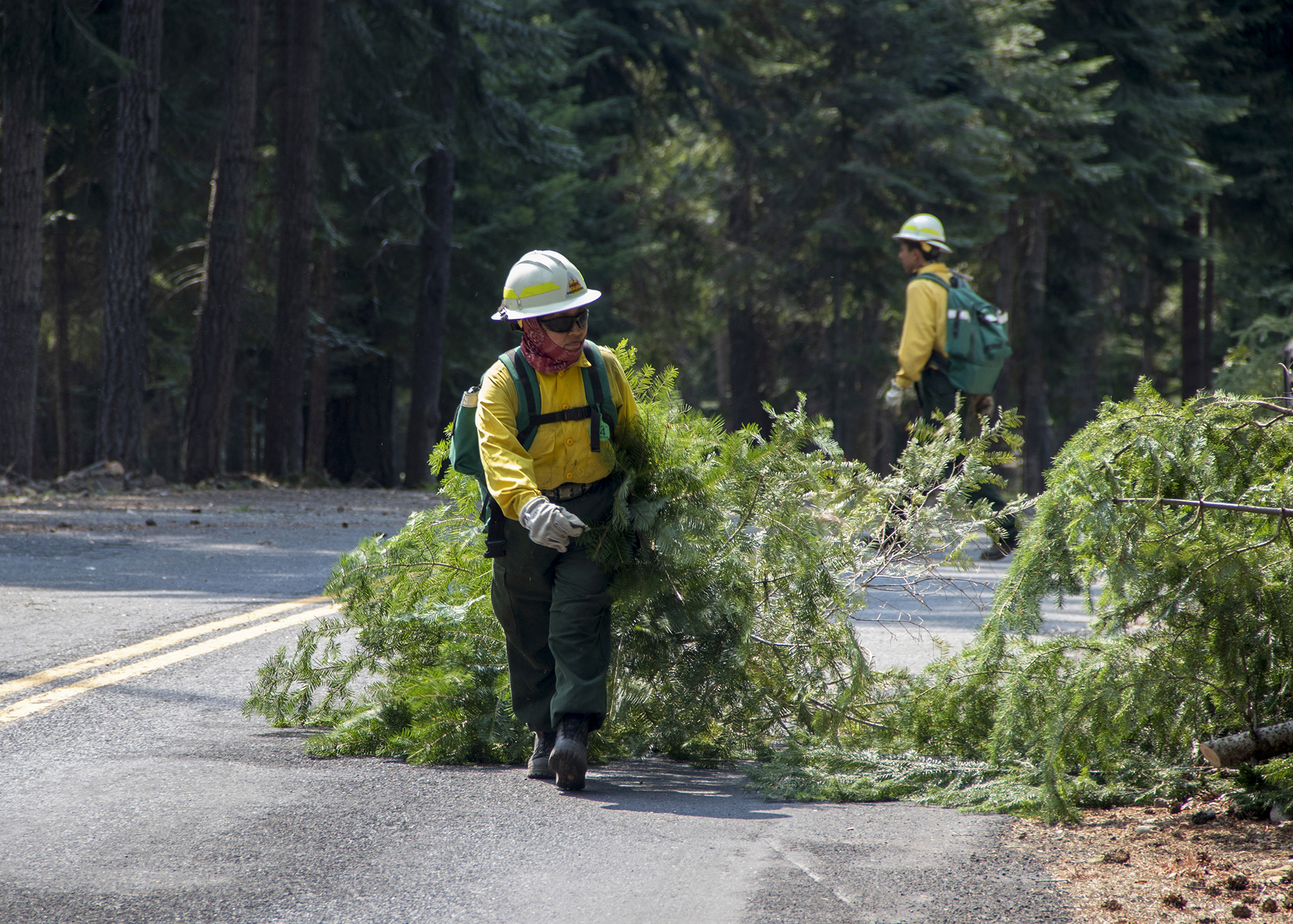 Generally, federal and state agencies close public lands near active fires to keep both visitors and firefighters safe. But this year, as firefighting resources have been stretched across numerous large fires, agencies have also made more preemptive closures.

The closures in California’s national forests, for example, came as the state was facing “record-level fuel and fire conditions” and “significantly limited” resources to attack and combat new fires, U.S. Forest Service officials said last week. They closed lands to limit the possibility of more fires and to keep responders safe as they responded to active fires.

Rickert said he expected the number of fires to exceed the 10-year average of 3,358 in the remaining weeks of the wildfire season.

George Geissler, state forester for the state Department of Natural Resources, said this year’s extremely dry conditions made fuel in the forests, such as needles or downed trees, more flammable.

“Any spark has a 100 percent chance of causing a fire,” Geissler said. “It's a matter of whether or not there's enough oxygen to pull it off.”

Such conditions have led to both numerous and large fires that have drained resources – from firefighters to helicopters dumping water at the flames, he said.

Typically, Washington state would get help from firefighters across the U.S. or even from abroad. But available firefighters have been limited because they were busy elsewhere, unable to travel due to pandemic restrictions or had to quarantine due to contact with positive coronavirus cases, Geissler said.

This year, the level of wildfire activity has been so high that responding agencies, both nationally and in the Northwest, have been at the highest level of fire preparedness for several weeks.

As several large fires raged through Washington state by late July, the state Department of Natural Resources decided to close all DNR lands in Eastern Washington. The state also issued a statewide burn ban, which prohibited campfires in state parks and forestlands.

Geissler said he knows the outdoors have been a respite for many during the COVID-19 pandemic, and the burn ban and land closures were probably disappointing to people grabbing a few restorative days in nature. Still, these widespread and preemptive closures came when other options were exhausted. They needed to do whatever they could to prevent any new fires from further taxing already limited resources, he said.

“We reach a point where it's unsafe and normal precautions don't work anymore,” Geissler said. 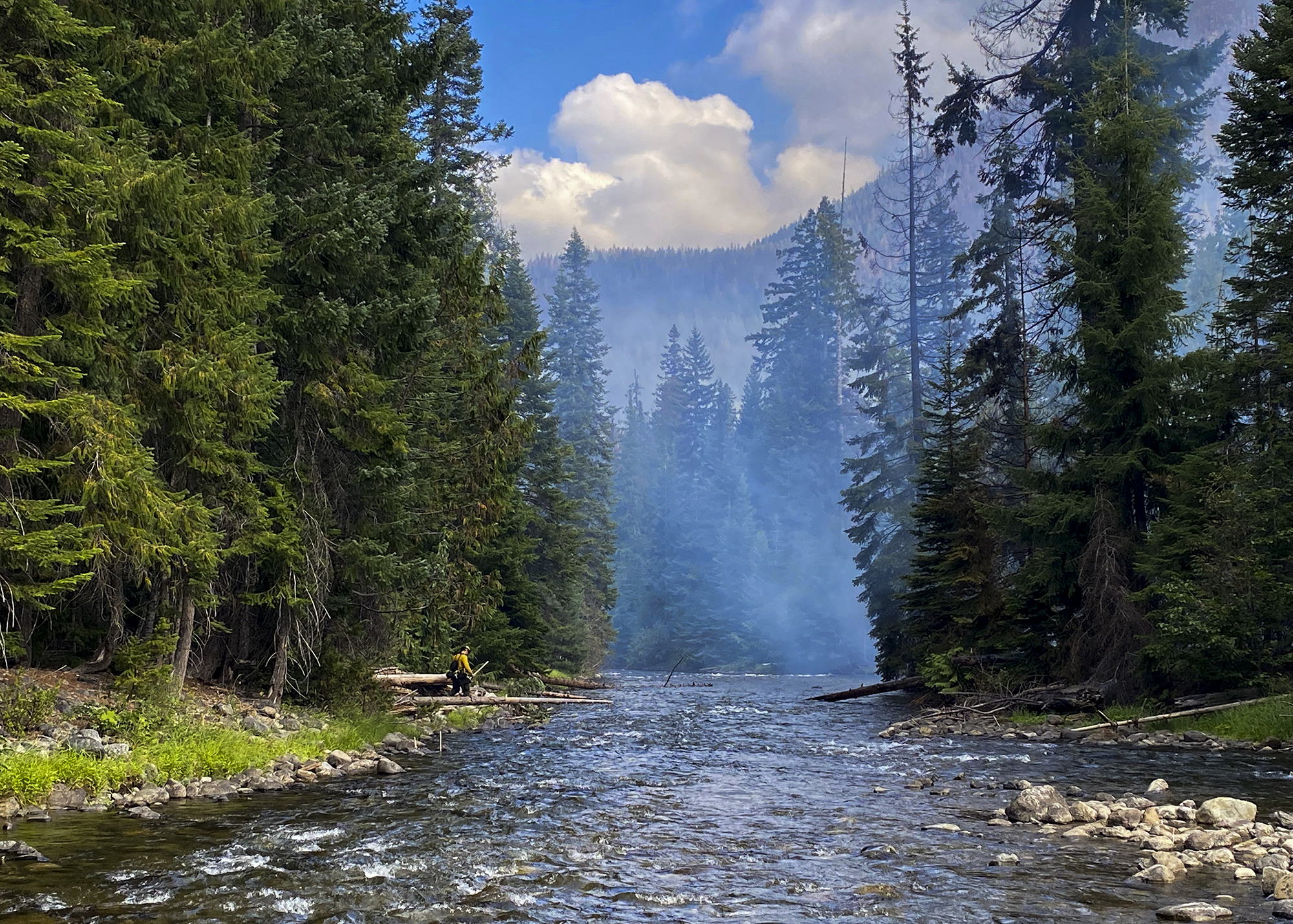 While Washington state has not had a total closure of any of its national forests due to wildfires as California did, visitors have dealt with numerous closures.

Communities dependent on tourism activity are also feeling the fires in their bank accounts. 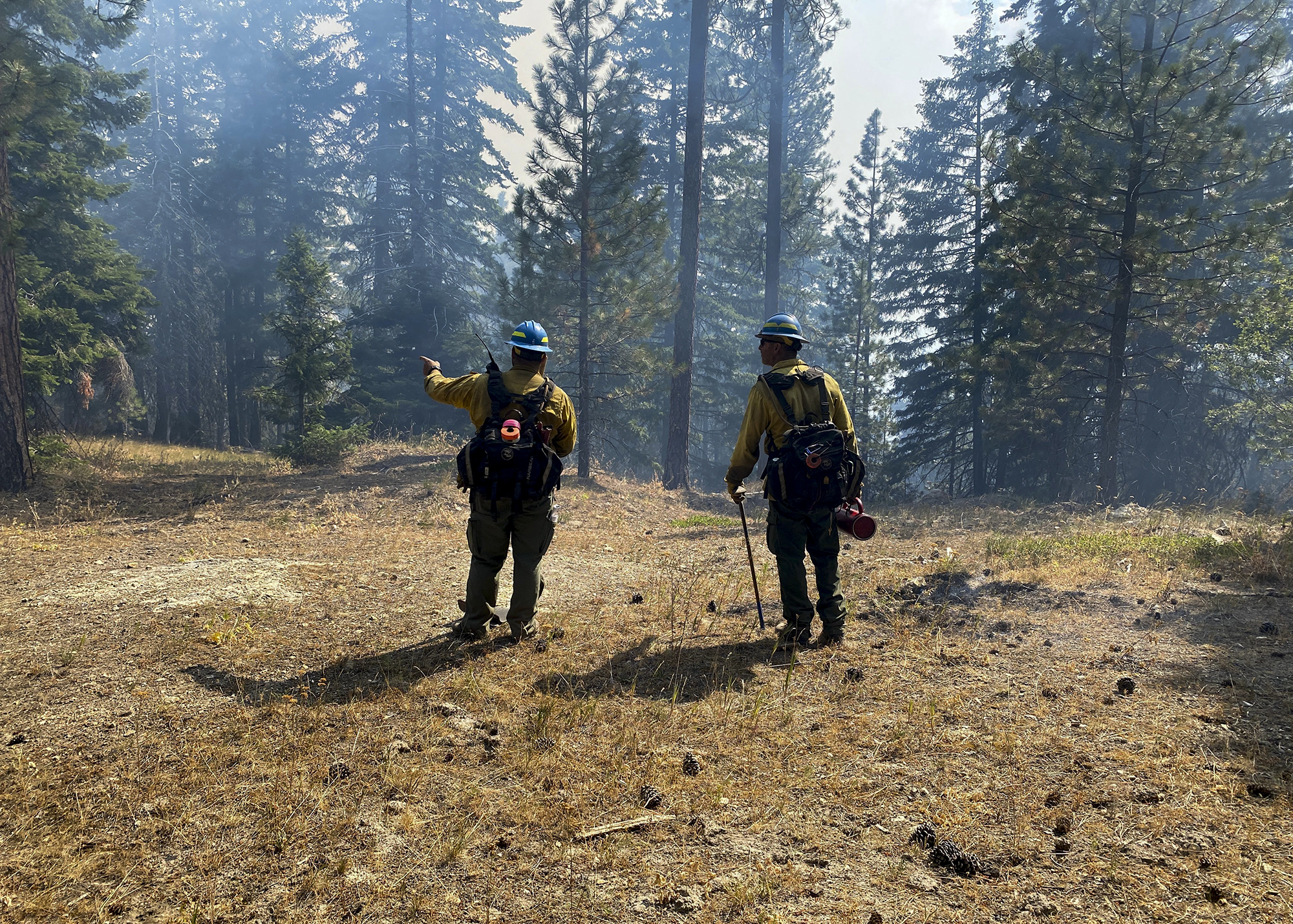 Winthrop, a town in the Methow Valley in North Central Washington, bills itself as the “Gateway to the North Cascades” on its website due to its proximity to numerous trails and wilderness areas enjoyed by hikers, horseback riders and backcountry campers.

A 20-mile portion of State Route 20, known as the North Cascades Highway, closed for several weeks in late July and early August due to wildfires, such as the 86-square-mile Cedar Creek Fire. The closure blocked the most direct route from Western Washington to the North Cascades’ recreational areas and nearby communities like Winthrop.

Numerous trails, including ones to access the Pasayten Wilderness, a popular backpacking area in the Okanogan-Wenatchee National Forest, were also closed, hindering planned hikes and camping trips.

And, of course, the fires also created unhealthy air conditions that kept people away.

“People come and want to see our beautiful area,” she said, “When it's not so beautiful, they don't want to come.”

Ranzau emphasized, however, that she didn’t want to encourage people to visit under such poor conditions.

How to find out what’s open (or closed)

The Okanogan-Wenatchee National Forest and Colville National Forest websites offer alerts and notices, including ones related to wildfire closures. Both national forests have been hit with numerous fires this summer.

The state Department of Fish and Wildlife has a dedicated page to wildfires on its website  that include updates on closures to its lands as well as wildfire prevention tips.

The Northwest Interagency Coordination Center offers an information portal on active fires in Washington and Oregon that includes interactive maps and daily and weekly dispatches.

The North Cascades region is also home to many DNR lands affected by widespread closure. Ranzau understands resources were stretched to fight the fires already raging in the North Cascades and that closures were needed to limit the potential of additional fires.

While Ranzau is waiting for firm numbers, conversations with business owners indicate this year’s wildfire closures likely had a more significant negative business impact than the COVID-19 restrictions last summer.

While pandemic restrictions negatively affected business, the community still had visitors from Western Washington who came to the area for outdoor recreation, Ranzau said.

“If the highway is closed, it looks like a ghost town downtown,” Ranzau said. “There's nobody walking around, which means there are no customers, which means (businesses) making no sales.”

Things have looked up as some much-needed precipitation fell in recent weeks, helping contain several large fires nearby.

Ranzau is looking forward to several September events, such as the Cutthroat Classic trail race and other fall recreation that will bring visitors back to Winthrop.

“They're hoping for a good fall because summer was kind of lost,” she said. 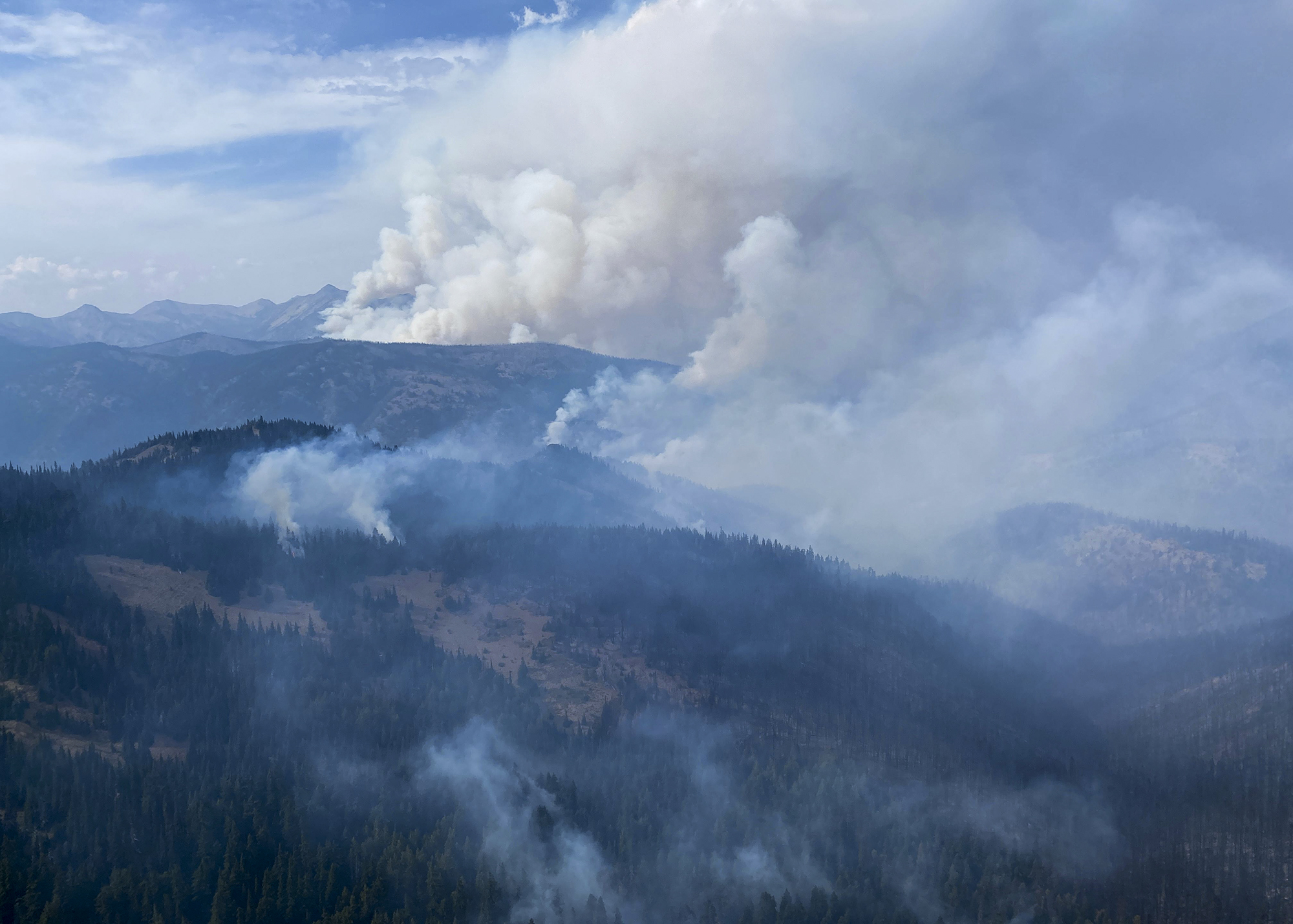 The state’s fire suppression costs for July were $18 million. The final figure will be higher as bills continue to come in, said Ryan Rodruck, public information officer for the state Department of Natural Resources.

The state’s July firefighting expenses were higher than it spent during all of the 2011 and 2012 fiscal years, when the state spent $16.4 million and $13.3 million, respectively. And fire season 2021 isn’t over. The previous fiscal year, including the 2020 wildfire season plus June of 2021, cost $96 million, the third-highest year for fire suppression in the last 10 years.

Officials hope that a $328 million wildfire budget approved by the Washington Legislature will be sufficient for this fiscal year, including July and August of this year.

The package includes money for hiring firefighters and buying new equipment, as well as forest restoration and helping those who live in fire-prone areas.

Geissler, the DNR forester, said that he sees the new funding as a “good start.”

Additional resources would help the agency and those it partners with attack new fires more aggressively, keep them small, contain them quickly and minimize the need to close recreational areas, Geissler said.

“We want to avoid these huge fires that threaten our communities and lands,” he said.

In addition, a bipartisan $1 trillion infrastructure bill passed in the U.S. Senate early last month, including money to increase wages for firefighters and forest management, such as tree trimming and prescribed fires and community wildfire preparation efforts.

That could mean tens of millions of additional dollars for federal forests in Washington state. About half of the state’s land area is forests, and a significant portion of that land is federally owned.

Officials expect extreme dry conditions in the Pacific Northwest will continue to drive active wildfire seasons in the coming years.

“We’re two-tenths of a mile into a marathon,” he said. 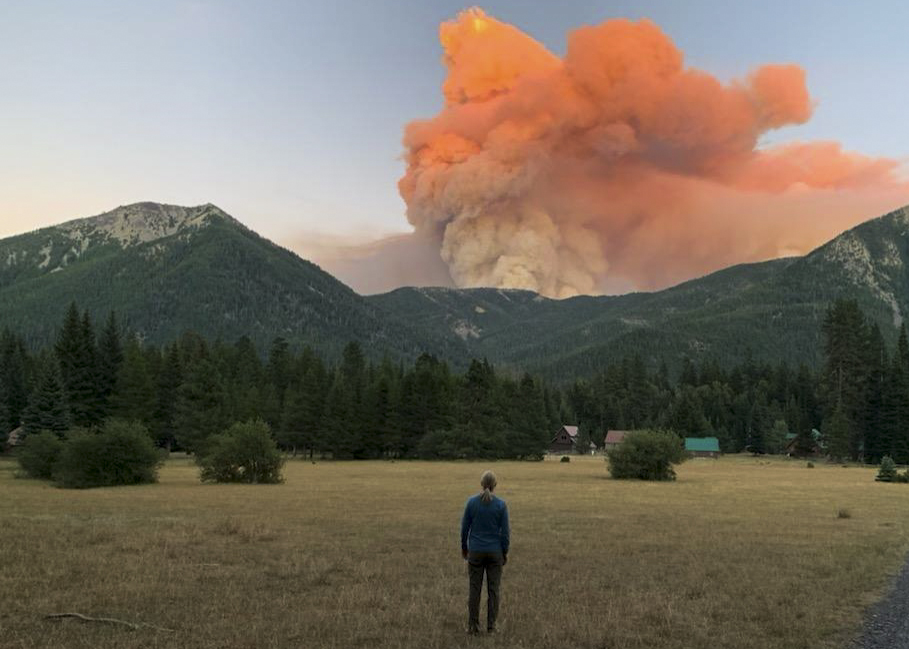 Plans on the fly

While agencies work to secure additional resources, those who use recreational lands, such as rafting companies, continue to be flexible and adjust to wildfires.

Elio, the operations manager for Orion River Rafting, said he rerouted a recent rafting trip on the Deschutes River in Oregon so participants would avoid an area that was under an evacuation alert due to a nearby wildfire. And the company has canceled trips because of unhealthy wildfire smoke.

Many decisions have to be made on the fly, said Reif, the Wildwater River Guides owner. Trips are planned and booked well in advance, so advanced planning around wildfires or other outdoor conditions is nearly impossible.

Decisions are made weeks, or even days, before a scheduled trip.

“We're in an outdoor recreation business. We're constantly having to adjust and evolve based on climate conditions,” Reif acknowledged.