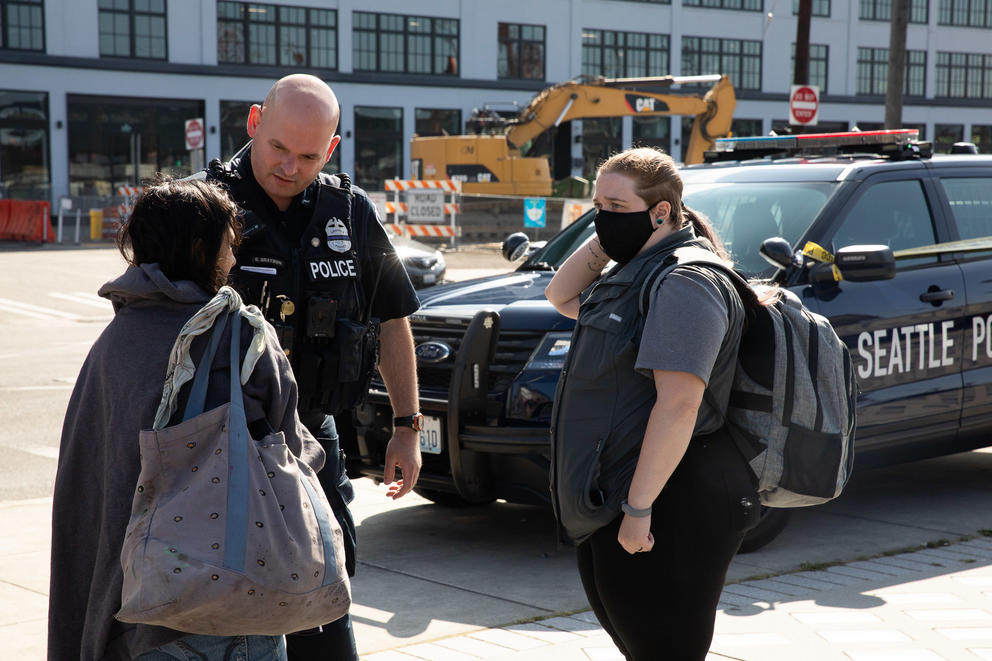 Mariah Andrignis, at right, a social worker from the Downtown Emergency Service Center, which contracts with the Seattle Police Department to help with crisis response, works with SPD crisis response team Officer Sandlin Grayson while speaking with a witness at the scene of a fatal stabbing in front of Seattle Fire Department's Station 5 along Alaskan Way in downtown Seattle, Aug. 6, 2020. (Matt M. McKnight/Crosscut)

In the month since new police accountability laws took effect in Washington state, the Seattle Police Department’s approach toward people in mental health crisis has become notably more hands off, according to a Crosscut analysis of publicly available data.

The result, say service providers, is that individuals in deep crisis lack access to an imperfect, but essential, safety valve to keep them from hurting themselves or others.

Officials with the Seattle Police Department, meanwhile, said the decline reflects uncertainty within the department about what type of force is allowed and what’s not under the state’s new laws. That has led to a reluctance among officers to engage, they said.

The decline comes at a time when elected officials, activists, service providers and even some in law enforcement are casting about for new ways to respond to mental health crises without sending an armed officer. But absent scaled-up alternatives, the change in practice by the state’s largest police department has been disorienting for those on the front lines of crisis response.

“While I think all of us want to build a system that allows for a behavioral health first response, the components that you need for that system are not in place yet,” said Daniel Malone, executive director of the Downtown Emergency Service Center, which operates a team of nonpolice crisis outreach workers. “So simply sending mobile crisis in lieu of any other kind of law enforcement — without having a clearer picture of what’s going on — has left staff doing that work very uneasy and unclear about how their safety will be supported.”

At issue is when individuals can or should be taken to the hospital against their will — which can often include officers restraining an individual. Authorized under the state’s involuntary treatment act, these forced commitments are the most common conclusion to SPD’s interactions with someone in crisis, accounting for about 40%  of calls, according to department data.

Only two positions are authorized to carry out these commitments: designated crisis responders and law enforcement.

The new rules limiting force were passed into law by the Legislature this year via House Bill 1310. Following the law's late-July implementation, use of involuntary commitments by Seattle police officers dropped by roughly 45% in August when compared with the monthly average of the previous four years, according to department data. The 242 occasions in which an officer committed someone to the hospital in August was the lowest number since September 2016 and roughly half the number from June of this year.

Some departments across Washington have pointed to the new rules as reason to disengage entirely from mental health calls. Interim Seattle Police Chief Adrian Diaz has made no such claim, calling that interpretation of the new law “absurd.”

At the same time, department leadership has cautioned officers against laying hands on someone not actively committing a crime, according to SPD Sgt. Eric Pisconski — a message that’s now showing up in department data.

“There's definitely a noticeable drop off,” confirmed Pisconski, who leads the department’s crisis response unit. “I think it's reasonable to connect those dots — that the impacts of 1310 we're seeing directly in emergent detentions.”

The new law limits when a police officer may use physical force to instances when there’s probable cause for an arrest, and to prevent someone under arrest from escaping. Force is also allowed when there are threats of bodily harm to the officer, the subject or anyone else in the area. Force may be used only after alternative de-escalation techniques have been attempted. When it is used, force must be “reasonable and proportional” to the “threat posed to the officer and others.”

The bill raises mental health as a consideration for officers, but does not specifically name involuntary commitments. State Sen. Jaime Pedersen, D-Seattle, said it would have been too fraught to put a box around behavioral health.

“It’s not as if in the real world it’s super easy to draw a bright line between the people who are potential [involuntary treatment] candidates and the rest of the world and say, ‘the rest of the world, here are de-escalation procedures and if you’ve got a credible reason to use [involuntary commitment], then you can go ahead and use whatever force you want to,'” he said.

Others have been more specific that the bill should not prevent involuntary commitments from occurring. “Nothing in HB 1310 prevents police from assisting in detaining and transporting a person to a hospital when a [designated crisis responder] has deemed that person an imminent risk under [the involuntary treatment act],” wrote Kim Mosolf, director of treatment facilities programs with Disability Rights Washington, and Enoka Herat, police practices and immigration counsel with the American Civil Liberties Union of Washington.

And yet, those assurances have done little to assuage SPD’s leadership. “We've been given direction that, at the moment, [police leaders] don't view [involuntary commitment] as fitting into the criteria for 1310,” said Pisconski.

The impacts of the department’s pullback are already apparent among crisis responders in Seattle. In one housing facility run by DESC, a resident in crisis became threatening toward staff, recalled Malone, the executive director. Employees tried to de-escalate the situation, but it continued to deteriorate. The staff decided the best option would be to commit the person to a hospital. They sought out and received authorization to do so from a designated crisis responder, who is legally endowed with the ability to force someone into treatment.

Malone said the example was not uncommon.

“We could have somebody who has been displaying a range of behaviors that we think meet criteria for involuntary commitment and we cannot get that result to happen,” he said. “So the behaviors might continue at this level that is quite concerning for weeks. And, meanwhile, our staff and our other clients are there in the same place and dealing with that and finding it extremely challenging, because it’s a lot to handle without the sense that there could be some relief that could be coming.”

It’s a story increasingly echoed by other frontline crisis workers. Kelli Nomura, who oversees King County’s designated crisis responders, said the biggest challenge since HR 1310 took effect has been around transportation to the hospital. A designated crisis responder may conclude someone needs to go to the hospital, but often needs the help of police and fire personnel to actually move them from Point A to Point B.

“It's been a little bit of a challenge because that part is not up to us whether SPD or other police respond,” Nomura said. “And then the ambulances are having to make decisions thereafter on whether they feel like they could participate in that next step of the process.”

The local interpretation of HR 1310 dovetails with larger conversations around responding to behavioral health crises without armed police. In Seattle, Mayor Jenny Durkan and Councilmember Lisa Herbold recently announced their intention to create a “triage one” unit to divert some calls away from police. The city also deploys a fire department unit, Health One, to handle less acute calls.

“I think that we’re in a transformative moment in police reform,” said Herbold. “We need police officers working with all of us to create a better response system and not responding at all when there doesn’t seem to be a reason” when they’re needed.

That system doesn’t exist yet, however, which is the source of much of the recent consternation. Sen. Pedersen allowed that the new bill would likely need clarifying and be a topic of discussion in the Legislature’s 2022 session. He also said that all of the consideration of the bill’s impacts could act as a spur to move forward on alternatives to police in a way they wouldn’t have otherwise.

“It’d be better if we had that system fully built out before we made that change, so we’ve got to own that,” said Pedersen. “On the other hand, I think there are people who, from the community, very legitimately felt like we’re never going to have the pressure to spend the money and create the new system until we do something to stop the carnage on Black and brown people who are getting killed by police.” 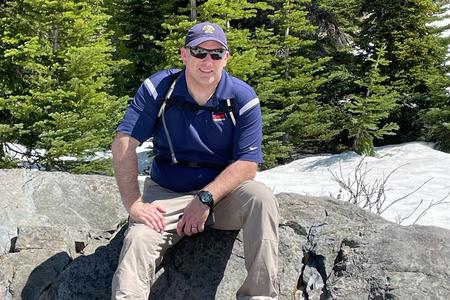 by / September 16
Article continues below

Black Coffee NW has ‘a place and a purpose’ in Shoreline

The Wearys say they never want a Black family to feel alone. The family business has been a target of racism in the predominantly white neighborhood.