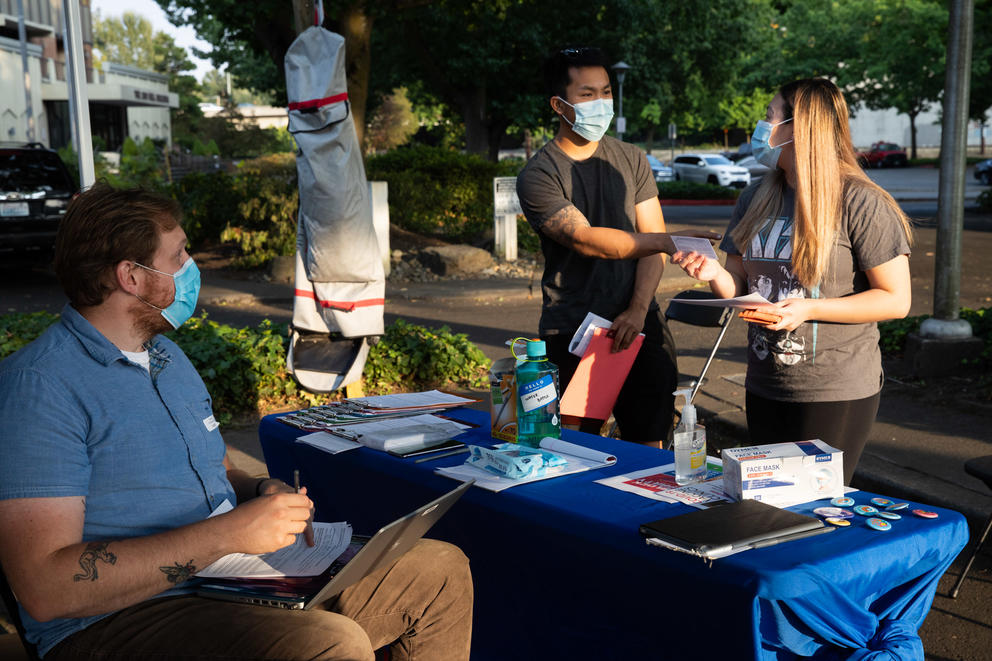 As pandemic dates go, Sandy Nguyen and Michael Chu’s late August trip to the Renton Public Library was a classic. Nguyen and Chu weren’t there for a romantic read over the Cedar River. They wanted shots of the Johnson & Johnson vaccine against COVID-19, on offer at a pop-up vaccination clinic in the library parking lot.

Nguyen, 24, and Chu, 32, had put off vaccination, even as their parents and other relatives received the jab. Asked why they waited, Nguyen said she hadn’t seen a reason to hurry. Chu said he had heard stories about bad reactions to the vaccine and worried he would have one.

“I was nervous, I’m not going to lie,” said Chu, a sanitation worker, who, like Nguyen, lives in Renton.

Street-corner protesters spurred on by misinformation and attention-hungry politicians may be the popular conception of an unvaccinated American, and 52% of unvaccinated American adults do say they won’t be vaccinated under any circumstances, according to recent polling. But about 37% of those who’ve eschewed the coronavirus vaccines say they’re still considering it. As was the case for Chu and Nguyen, they aren’t so much opposed as reluctant. 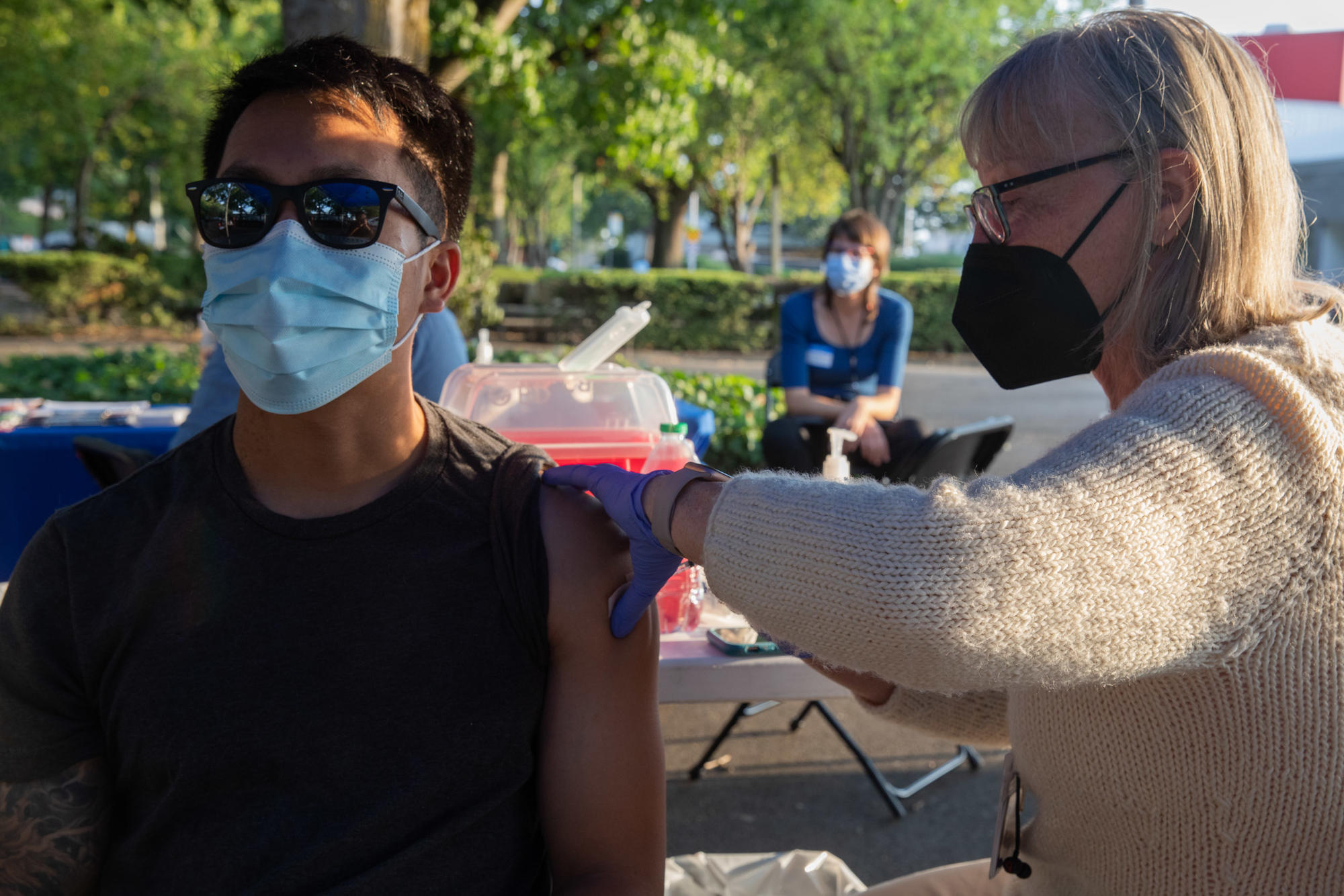 Michael Chu of Renton receives a COVID-19 vaccine during a visit to a pop-up vaccination at the Renton Public Library on Aug. 25, 2021. (Matt M. McKnight/Crosscut)

Michael Chu of Renton receives a COVID-19 vaccine during a visit to a pop-up vaccination at the Renton Public Library on Aug. 25, 2021. (Matt M. McKnight/Crosscut)

It’s that slice of the populace — the 1 in 10 Americans who say they have yet to decide whether they’ll get vaccinated — that public health workers are targeting as the coronavirus surge packing hospitals threatens to reverse gains made since vaccines became widely available in the spring. A Crosscut/Elway Poll conducted in July found that 4% of Washington residents still straddled the fence on vaccination, but the number of Washingtonians saying they would never get vaccinated has been shrinking.

Justin Harris, 29, was among those ambivalent about vaccination. Odd as it sounds coming from an Army veteran with 13 tattoos, he doesn’t like needles. He also had concerns about the long-term effects of vaccination. The vaccines — drugs that are, in fact, tweaks on technology that was in development for more than a decade — struck him as too new. They felt rushed to him, and dangerous.

“I’m more of a ‘better safe than sorry’ person,” Harris said. “I really wanted to watch the news.”

The pandemic news is, of course, bad.

Like much of Washington state and the rest of the country, intensive care units at King County hospitals are full because of a surge of COVID patients, said Dr. Jeffrey Duchin, Public Health — Seattle & King County’s health officer. The easily transmissible delta variant of COVID-19 has been found in essentially all of the infections that have been analyzed, Duchin continued during a Friday press conference breaking down the latest statistics.

While vaccinated people can contract COVID, they’re far, far less likely to be hospitalized or die from the disease, Duchin said. A Public Health analysis found vaccinated people are 67 times less likely to die of COVID and 37 times less likely to be hospitalized than people who are not fully vaccinated. About 82% of eligible King County residents are fully or partially vaccinated, according to state Department of Health records, and new vaccinations are on the rise after hitting a low in mid-July. Still, Duchin said the now-familiar COVID waves will continue until more residents are vaccinated.

The rise in new infections and hospitalizations caught Harris’ attention, and changed the way he balanced the risks he perceived between vaccination and a COVID-19 infection. He plans to move to Savannah, Georgia, and the infection numbers in that state have him concerned.

Harris was among the six or so patients to receive the Johnson & Johnson single-dose vaccine at a late August pop-up clinic in Kent. Kevy Wijaya, the certified nurse practitioner who gave Harris his shot, has been vaccinating people at community events and pop-up clinics for much of the year. Wijaya’s recent experience tracks with the national trend — the spread of COVID-19’s more-contagious variant is driving folks to get vaccinated.

The rush doesn’t come close to matching the interest seen when the vaccines first became available, Wijaya said, but the pop-up sites tend to draw a handful of people. The day before his Kent visit, Wijaya and his colleagues administered 32 vaccinations at a public housing project in White Center. They got no takers at all during a weekend visit to a community festival.

When he’s not out vaccinating, Wijaya is a primary care provider and medical director at Bellevue’s Stepping Stone Pediatrics. He said he spends much of his time at the clinic testing children for COVID. The number who are now testing positive is disconcerting.

“It’s just unheard of,” said Wijaya, describing a marked change from earlier in the pandemic, when infections in children were unusual.

The latest COVID wave hasn’t moved Veda Stram, an unvaccinated 75-year-old Camano Island resident. Stram, a longtime animal rights activist, said she doesn’t see the need. She leads a solitary life, wears a mask when she travels and has so far avoided COVID-19. She doesn’t believe assurances offered by the government or the vaccine manufacturers, and, when asked, couldn’t identify anything or anyone who might change her mind. 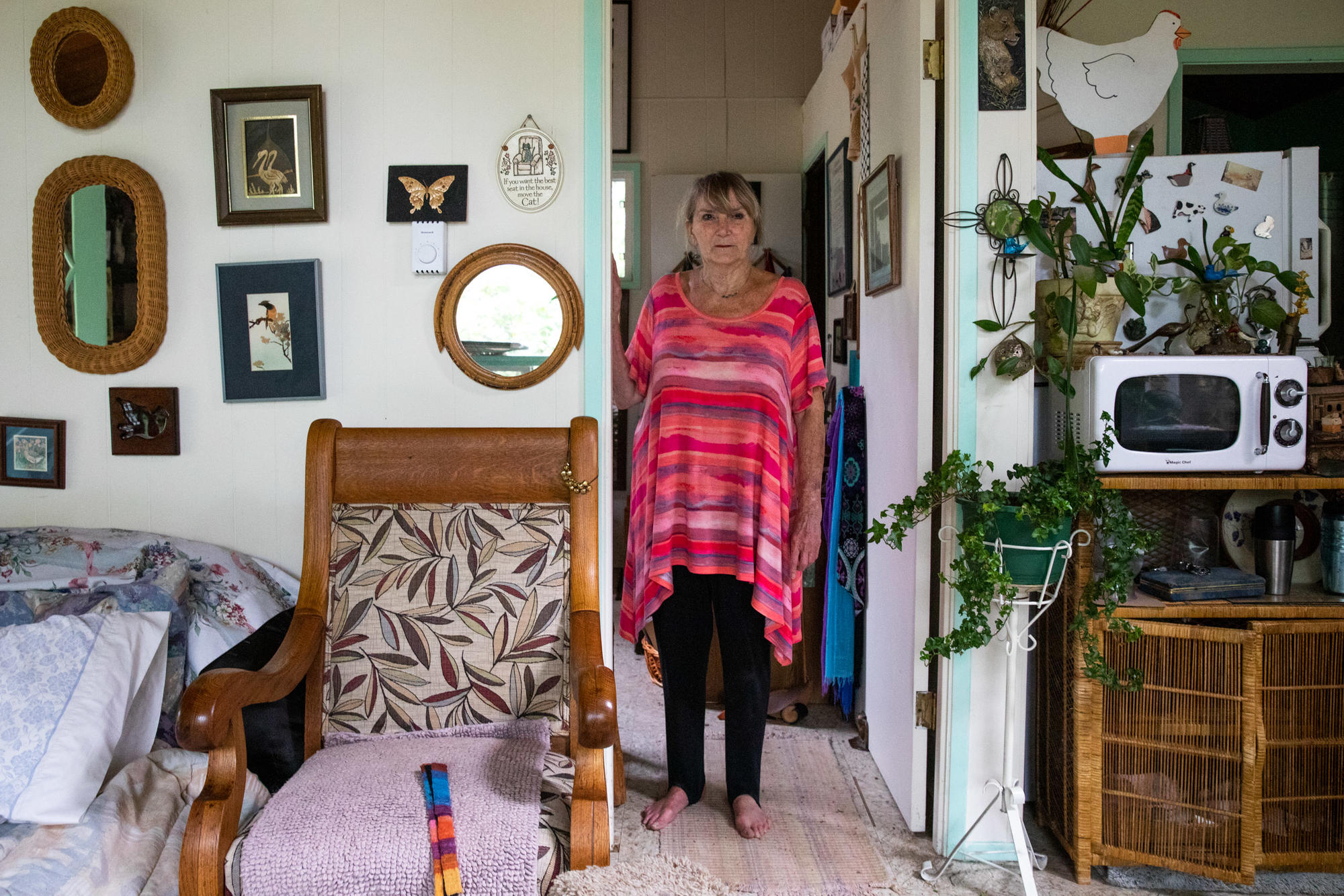 Veda Stram, 75, a vegan for more than 30 years and an animal rights advocate, opposes getting any COVID-19 vaccine in part because they were tested on animals. Pictured at her Camano Island home on Aug. 27, 2021. (Matt M. McKnight/Crosscut)

Veda Stram, 75, a vegan for more than 30 years and an animal rights advocate, opposes getting any COVID-19 vaccine in part because they were tested on animals. Pictured at her Camano Island home on Aug. 27, 2021. (Matt M. McKnight/Crosscut)

An unvaccinated registered nurse, speaking to Crosscut on the condition that her name not be published because of a child custody issue, voiced similar concerns. To her eye, the vaccine approvals and statements coming from the government “are just not adding up.” Her daughter suffered blood clots after she was vaccinated, the woman claimed, heightening her worries about vaccine safety.

She had previously described herself as a “maybe” regarding the vaccine, but said she doesn’t expect to be convinced that the vaccines are safe or, for her, necessary.

“I’m not against anybody who gets the vaccine. That’s their choice,” she said. “I don’t feel like I want to be cattle led up to the shot line.”

Speaking with patients who are intractably opposed to vaccination, Dr. Jeff Smith’s first and deepest reaction is sadness.

Smith is the chief medical officer at Community Health Care, a private, nonprofit clinic network serving Pierce County, where about 61% of residents old enough to receive a vaccine have done so. Having practiced at the clinics for 25 years, he often faces a patient he has known for decades who is making a choice that may kill them. Their refusals, he said, are heartbreaking.

Some of his patients are “hardcore” in their opposition to the vaccine, Smith said. Others are unclear on the science behind the drugs, scared of the side effects they’ve seen described — serious complications are rare — or suspicious of a vaccine they perceive as new.

“I get it,” Smith said. “This is a very scary time. There’s a lot of scary things going on in the world.”

“I tell them my family’s immunized, I’m immunized, I like you,” Smith said. “I’ve supported you and taken care of you for a long time. And I’m recommending this to keep you healthy.”

Although its clinics treat anyone, Community Health Care's clientele tends toward lower income folks, immigrants and people of color. As vaccines first became available, enthusiasm for them was significantly lower among Black and Hispanic Americans than whites, according to surveys conducted by KFF, a nonpartisan health policy organization better known as the Kaiser Family Foundation. While 66% of Hispanics and 70% of Blacks now say they’re either vaccinated or plan to get vaccinated as soon as possible, vaccine hesitancy rates in those groups continue to outstrip the rate among whites nationally.

Much of that concern is borne of history, particularly in the Black community. Memories of forced medical testing — like the deadly Tuskegee Syphilis Study that saw the U.S. Public Health Service secretly infect hundreds of Black men with the disease — haven’t faded. Those abuses were front of mind for Debra Monroe when the vaccines started to become available last winter.

“Being a Black person and knowing our history, my answer was no,” said Monroe, a 58-year-old Seattle resident.

A Martin Luther King, Jr., Day presentation by Black medical experts prompted Monroe to reconsider. She received the vaccine and now works at Public Health – Seattle & King County as a community navigator helping skeptical residents to better understand the vaccines. She answers questions, builds trust and, when people are ready, connects them with a vaccine provider.

That people who are vaccinated still sometimes contract COVID has been a common concern lately, Monroe said. She explains to those who raise the issue that vaccination greatly reduces the risk of getting the disease and the chances that it will take a bad turn.

“I’m going to keep doing it until it’s no longer needed,” she said. “I have to.”

The Food & Drug Administration’s recent full approval of the Pfizer vaccine has helped, Monroe said, and both the spike in infections and the proliferation of employer-imposed vaccine mandates are causing some to reconsider. Vaccination rates among King County’s younger residents remain lower than the countrywide average, but they are rising. Monroe is hopeful that shift will accelerate. 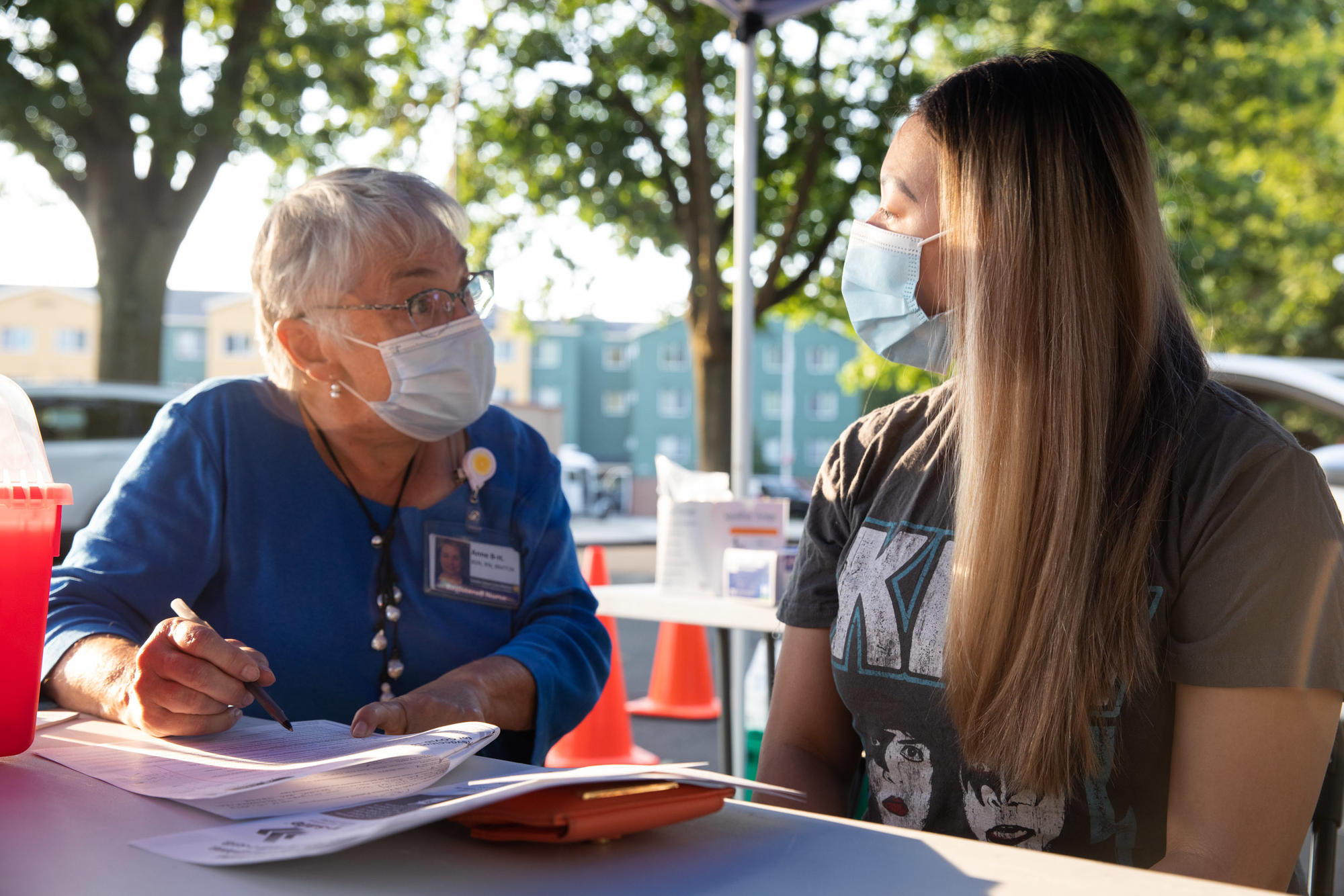 Sandy Nguyen of Renton completes paperwork before receiving a COVID-19 vaccine at a pop-up vaccination site at the Renton Public Library on Aug. 25, 2021. (Matt M. McKnight/Crosscut)

Sandy Nguyen of Renton completes paperwork before receiving a COVID-19 vaccine at a pop-up vaccination site at the Renton Public Library on Aug. 25, 2021. (Matt M. McKnight/Crosscut)

Nguyen, the young woman who joined her boyfriend to get vaccinated outside the Renton library, said her parents kept telling her to get vaccinated. She and Chu said vaccination status is mixed in both their families. While Chu is not particularly concerned about contracting COVID, he said he’s glad to help stop the disease’s spread.

“I’m doing it for a good reason,” he said, “to protect myself and to protect others.” 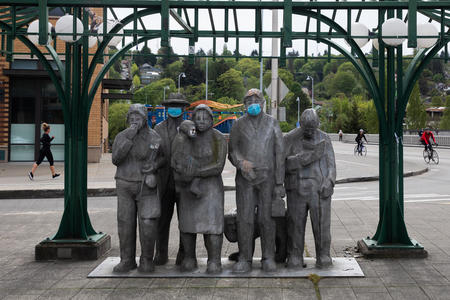 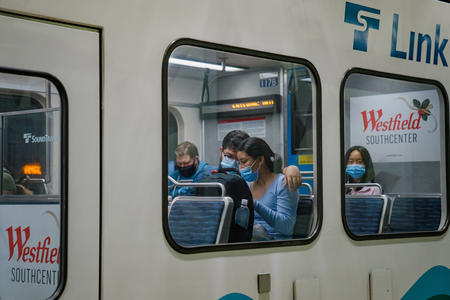