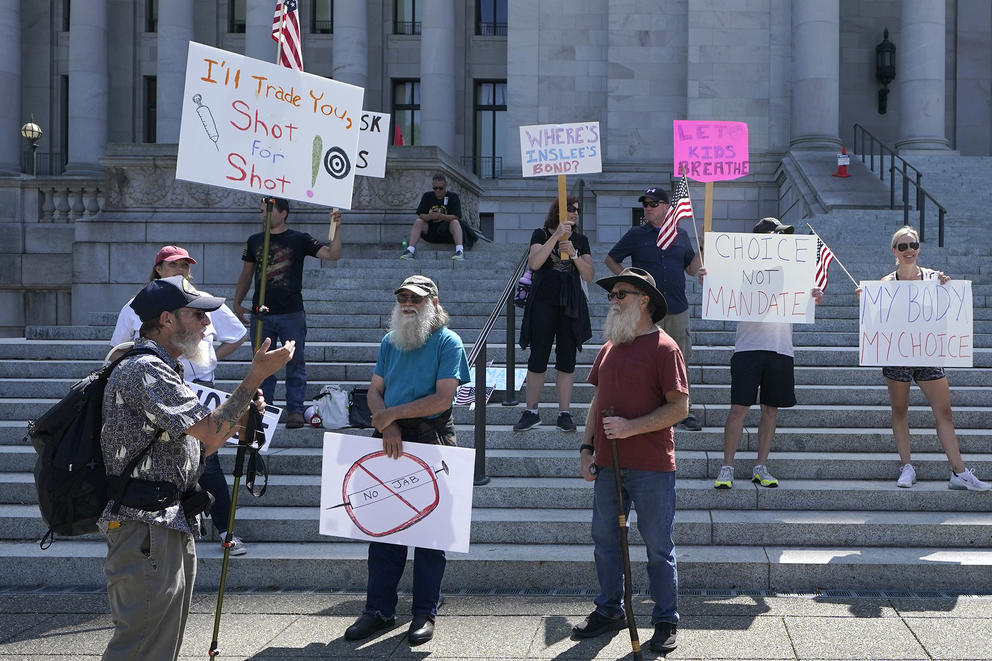 Protesters who oppose mask and COVID-19 vaccine mandates gather outside the Legislative Building on Aug. 18, 2021, at the Capitol in Olympia. Gov. Jay Inslee announced that day that Washington state is expanding its vaccine mandate to include all public, charter and private school teachers and staff, as well as those working at the state's colleges and universities. Inslee also expanded the statewide indoor mask mandate to include those who are vaccinated. (Ted S. Warren/AP)

President Joe Biden soon will require millions of workers to get vaccinated against COVID-19 or be tested weekly. But before Biden’s Sept. 9 announcement, 18 states and the District of Columbia already had told public sector workers to get their jabs or risk losing their jobs, and 21 states, plus D.C., had such mandates for health care workers.

Many of those state mandates will take effect in the coming weeks, offering a glimpse of the effects Biden’s plan could have on the workforce once the final federal rule is in place.

Like the federal plan, most of those state requirements will allow for weekly testing as an alternative to vaccination.

The U.S. Food and Drug Administration spent months weighing full approval of the vaccines. During that time, officials in several states negotiated with unions and considered whether a mandate would chase a large number of employees out of the state workforce.

“Overall, the states that have mandated vaccines have said, ‘We really need to do this, and we don't think we'll have a huge loss in our workforce,’ ” said Hemi Tewarson, executive director of the National Academy for State Health Policy, a nonpartisan forum of state policymakers.

This story was produced by Stateline, an initiative of The Pew Charitable Trusts. It was originally published Sept. 16, 2021

“We need to start understanding where [workers] are going to dig in and decide they'd rather lose employment than get vaccinated,” she said. “What sort of expertise are you losing, and does it shut down a ferry system or a public program? I do think there are concerns about what's going to happen to some parts of the workforce.”

Even states with strict vaccine mandates have offered medical exemptions, and most allow for religious exemptions as well. But experts say many states’ guidelines for granting such exemptions are unclear, and even in cases where they are allowed, employees may still lose their jobs if they can’t be accommodated safely.

Biden’s plan, which applies to businesses with more than 100 workers, would mostly bring the entire country in line with the agencies and industries already covered by state mandates. But in the handful of states without a testing alternative to vaccination, workers who are still hesitant about COVID-19 vaccines face a stark choice.

In Colorado, Nevada, Oregon and Washington, some or all state employees fall under vaccine rules that do not include a testing alternative. Health care workers and teachers face similar requirements in several other states, health systems and school districts.

“You should never be discriminated against because you opt out of a vaccine,” Republican state Rep. Jennifer Carlson, the bill’s sponsor, told NBC Montana. “I encourage you to respect the rights of those who wish to opt out.”

In Washington, wildland fire supervisor Mike Colombo told The Seattle Times that he will quit rather than comply with the state mandate, taking with him institutional experience that takes years to build.

“And if the commissioner of public lands and the governor have their way, I’ll never fight fire in Washington state again,” he told the newspaper.

‘No one’s in panic mode’

Washington state’s mandate, issued last month by Democratic Gov. Jay Inslee, covers more than 800,000 workers. And unlike the economywide mandate announced by Biden last week, it doesn’t allow employees to submit to weekly testing instead of getting a vaccine.

When Washington’s teachers, health care workers and public sector employees report for work on Monday, Oct. 18, they’ll need to be vaccinated against COVID-19 or risk losing their jobs.

“The reason there's not a test-out option is that we just weren't convinced it was an efficient or effective way to keep people and communities safe,” said Mike Faulk, Inslee’s deputy director of communications. “We already had testing prior to the vaccine being widely available at the Department of Corrections and other congregate work settings.

“Regular testing didn't necessarily prevent that many cases, and we've seen state employees get COVID on the job and eventually die.”

Faulk also noted that a weekly testing program would have cost the state about $66 million a year.

Leanne Kunze, executive director of the Washington Federation of State Employees, the state’s largest public service worker union, said some workers have had exemptions granted but been told the state cannot accommodate them safely, meaning they can still lose their jobs. Some of those employees are still working remotely, she said.

“There are people in these situations who would normally be interacting with colleagues and the general public, but they're not and haven't been for 18 months,” she said. “Until they return to a populated work environment, the deadline seems more arbitrary for those folks.”

Last week, the Washington employees union ratified an agreement with the state that will allow workers who don’t meet the Oct. 18 deadline to use unpaid leave time to complete their vaccinations, while also granting workers an additional leave day as an incentive. The agreement also lets employees who are retiring in 2021 use leave time to reach their retirement date, rather than going through immediate separation.

“Once a tentative agreement was reached, people were already beginning to make their vaccine appointments,” Kunze said. “I think they saw the writing on the wall, and it sunk in that we were truly bargaining the impacts, not the mandate itself.”

Washington state officials are still collecting data, but they expect workforce vaccination rates to roughly reflect the statewide percentage, about 70%. Faulk said Washington has seen vaccination rates tick up since the mandate was announced, a hopeful sign, but it’s still unclear what percentage of the state workforce will lose their jobs instead of getting the shot.

“No one's in panic mode here; we're not buying into the worst-case scenarios,” he said.

Kunze would not speculate on the number of state workers who could lose their jobs over the mandate, but said even a 10% loss rate would be a significant blow to public services. She worried especially about frontline workers dealing with vulnerable populations, and the employees who could be at risk if they’re left with reduced staffing.

Earlier this week, The Seattle Times reported that at least 8% of the state's workforce — nearly 5,000 employees across 24 agencies — had requested medical or religious exemptions. The paper found 737 exemption requests have been granted so far, but the state has made accommodations for only seven of those workers.

It's unclear how many of those workers will choose to get vaccinated if their exemptions are denied, or how many workers did not request an exemption but still plan to defy the mandate.

Washington is not alone in facing uncertainty about what vaccine mandates will do to its workforce. In San Diego, 65% of police officers who responded to a survey said they would consider quitting over vaccine requirements. Roughly 3,000 Los Angeles Police Department employees — nearly a quarter of the agency's workforce­ — are expected to request exemptions, mostly for religious reasons.

School districts across the country have said they’re worried about staffing shortages. Leaders of one district in Oregon passed a resolution last month expressing concern that the state’s mandate could cause a loss of staff and students — potentially jeopardizing the district’s ability to provide full-time, in-person instruction.

Oregon, like Washington, has no testing exemption in its vaccine rule. California will be one of the first states to put such a strict mandate to the test, when its new requirements for health care workers take effect Sept. 30. The state initially allowed unvaccinated workers to take weekly COVID-19 tests, but it removed that exemption as cases increased.

“How it's going to play out after Sept. 30 is not yet clear,” said Jan Emerson-Shea, vice president of external affairs with the California Hospital Association. “There's a concern about how this is going to impact staffing when we are already facing staffing shortages across the country.”

Emerson-Shea said her organization supports the mandate, calling it essential for public safety, but hopes it will be implemented in a way that minimizes disruption to the industry.

While health care staffing shortages have many causes — including burnout from the pandemic — CalMatters reports that traveling nurses are turning down California assignments rather than get vaccinated, worsening the problem. It’s unclear whether the new nationwide mandate will even the playing field for states such as California by imposing similar requirements elsewhere.

Faulk, the Washington governor's deputy director of communications, noted that the absence of a vaccine mandate could cause staffing challenges as well.

“There are so many people who work in health care who would probably leave if there wasn't a vaccine mandate,” he said. “They understand that the lack of vaccination is what is making their lives and jobs so chaotic right now.”

Even before Biden’s announcement, many private sector health care organizations had begun telling their staffs to get vaccinated.

“In the space of just a few weeks, we saw a significant uptick in the number of hospitals and health systems that opted to establish mandatory vaccine policies,” said Akin Demehin, director of policy at the American Hospital Association. “It went from 10s in early June to approaching a couple thousand.”

Demehin said that the health care industry, similar to many states, still has incomplete data about vaccination rates among its workers.

“What we've heard is that in a lot of cases, the announcement of a mandate serves as that final push to get people to get the vaccination,” he said.

The hospital group has not taken a position on whether regular testing is a safe alternative for unvaccinated workers.

In Connecticut, state employees in hospital facilities are required to get vaccinated, but most health systems have issued vaccine mandates for private sector workers as well, with some taking effect in the coming weeks.

Paul Kidwell, senior vice president of policy with the Connecticut Hospital Association, said vaccination rates among hospital workers have climbed above 80% since mandates were issued, and the group expects that number to grow.

“There will be some people who decide not to be vaccinated and leave employment, but it's too early to say whether that will be disruptive,” he said. “We have not heard from our members that the vaccine mandate is a reason for staffing challenges.”

While some fear Biden’s nationwide directive could upset the economy, there’s hope that it could help the industries and agencies already facing mandates.

Tewarson, the state health policy expert, said Biden’s announcement could take the pressure off states with their own mandates, but its effect on the workforce overall remains uncertain.

“This brings a lot more states into the fold by default, and that definitely supports the states that have gone ahead and done that,” she said. “Does that change the minds of people, to be resigned to it? Or is it going to gin up the rebellion against it and create more of a pushback?”