Harrell is Seattle's next mayor, after González concedes

Ann Davison won her race to be Seattle's top lawyer, while Sara Nelson and Teresa Mosqueda won their races for city council. 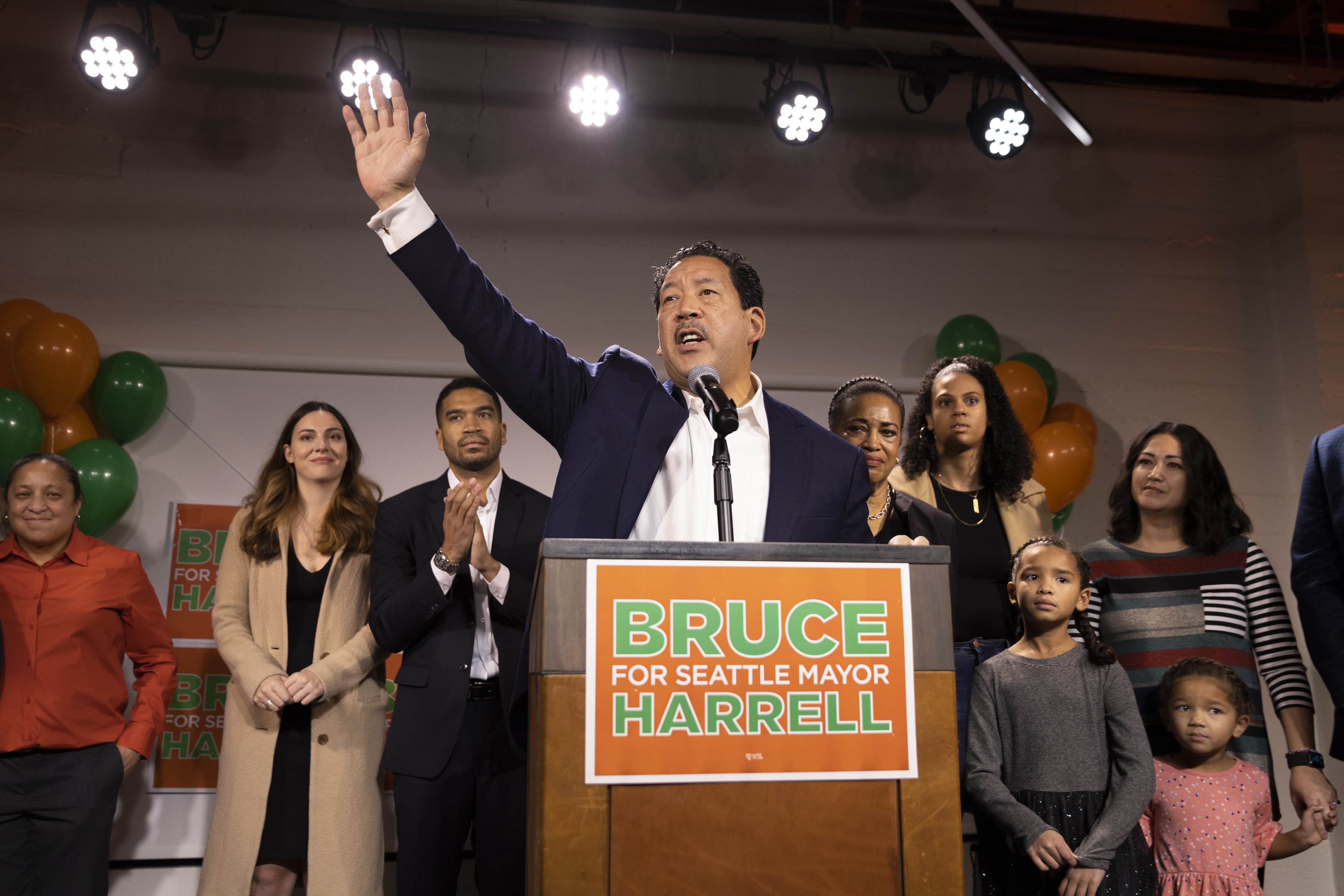 Seattle mayoral candidate Bruce Harrell is joined by family and friends as he makes a speech after early poll numbers give him a solid lead in the race, during an election-night gathering in Seattle on Tuesday, Nov. 2, 2021. (Jason Redmond for Crosscut)

M. Lorena González, president of the Seattle City Council, conceded her campaign for mayor Thursday, confirming to voters what was clear on election night: Bruce Harrell will be Seattle’s next mayor.

After months of sometimes brutal campaigning between the two former colleagues, the end result of Tuesday’s election was resounding. As of Friday, voters are favoring Harrell by around 47,000 votes, or 19 percentage points.

While that margin could narrow in the coming days, the gulf between them is insurmountable and yawning enough that the González campaign can hardly blame one single misstep. Rather, voters appear to be wholly rejecting her campaign’s pillars — and those of the other progressive candidates — that the city does not need more police officers and that the answer to homelessness is to tax the rich.

"With today’s ballot drop, it’s clear that Bruce Harrell will be the next Mayor of Seattle," González said in a statement Thursday. "Earlier, I called him to congratulate him on a hard-fought race and wished him much luck in his efforts to make progress on the challenges Seattle faces." González thanked her supporters and called on them to hold mayor-elect Harrell accountable.

For Harrell, his comfortable victory validates what had become his steady, if often unspecific, message about the need for unity in Seattle. He struck that note again in what was essentially a victory speech Tuesday night.

“We’re gonna put Seattle on fire with our love,” he told an exuberant crowd.

Harrell’s win represents an answer of sorts to the question of how 2020’s protests against police violence might be translated into electoral politics. Despite the rapid normalization of the cry to “defund the police,” voters in Seattle and elsewhere are rewarding the candidates who supported reform, not revolution.

Throughout his campaign, Harrell rejected the phrase entirely, calling for the hiring of more officers. He did so while pointing to his own interactions with police as a young Black and Japanese American man growing up in Seattle’s Central District.

“I understand racism and unfairness by the Police Department, but all communities want to be safe,” he said Tuesday.

Of the two campaigns, Harrell’s platform hewed more closely to outgoing Mayor Jenny Durkan’s. Despite immense pressure from the city’s activists, Durkan never promised specific cuts to the Seattle Police Department — although she did make several — and defended the need to take a proactive stance toward tent encampments. And while Durkan lobbied the state government to allow more progressive tax revenue, she remained skeptical about city-led efforts to tax large corporations.

The same can be said of Harrell.

In a statement, Durkan congratulated Harrell, whom she said she's known for 30 years. "I know Bruce wants every family to thrive in Seattle," she said. "He will bring people together to tackle the tough challenges we face on COVID-19, homelessness, public safety, and climate change. I hope all of Seattle joins to support him in these critical times."

Among the first tasks facing Harrell will be to staff the city’s departments. Turnover is standard among department heads during mayoral transitions, either by choice or because the new mayor wants a new team. For Harrell, his biggest and most immediate need is to find a new police chief. It’s a task that has greeted all recent mayors, with Ed Murray selecting Kathleen O’Toole and Jenny Durkan appointing Carmen Best.

From his campaign to be a change agent for City Hall, despite spending years there himself, Harrell will be under enormous pressure to show action on homelessness. That task is more complicated for him than for past mayors because much of the city’s budget and contract work on the issue has moved to the new King County Regional Homelessness Authority. But where he may have more immediate power is on homeless encampments.

Harrell seems to acknowledge the complexity of the task before him.

“We realize that we have decades and decades of underfunding in mental illness and drug and alcohol issues and special education and the cracks by which people fall through are huge,” he said Tuesday night. “But we can fix the problem when we work together.”

For González, her loss marks the end of six years in City Hall (the switch to district elections for the city council meant her first term was only two years). After winning her first election with the backing of both business and labor, González came to define herself as one of the council’s more progressive members, an identity that became even more pronounced in her final years there. 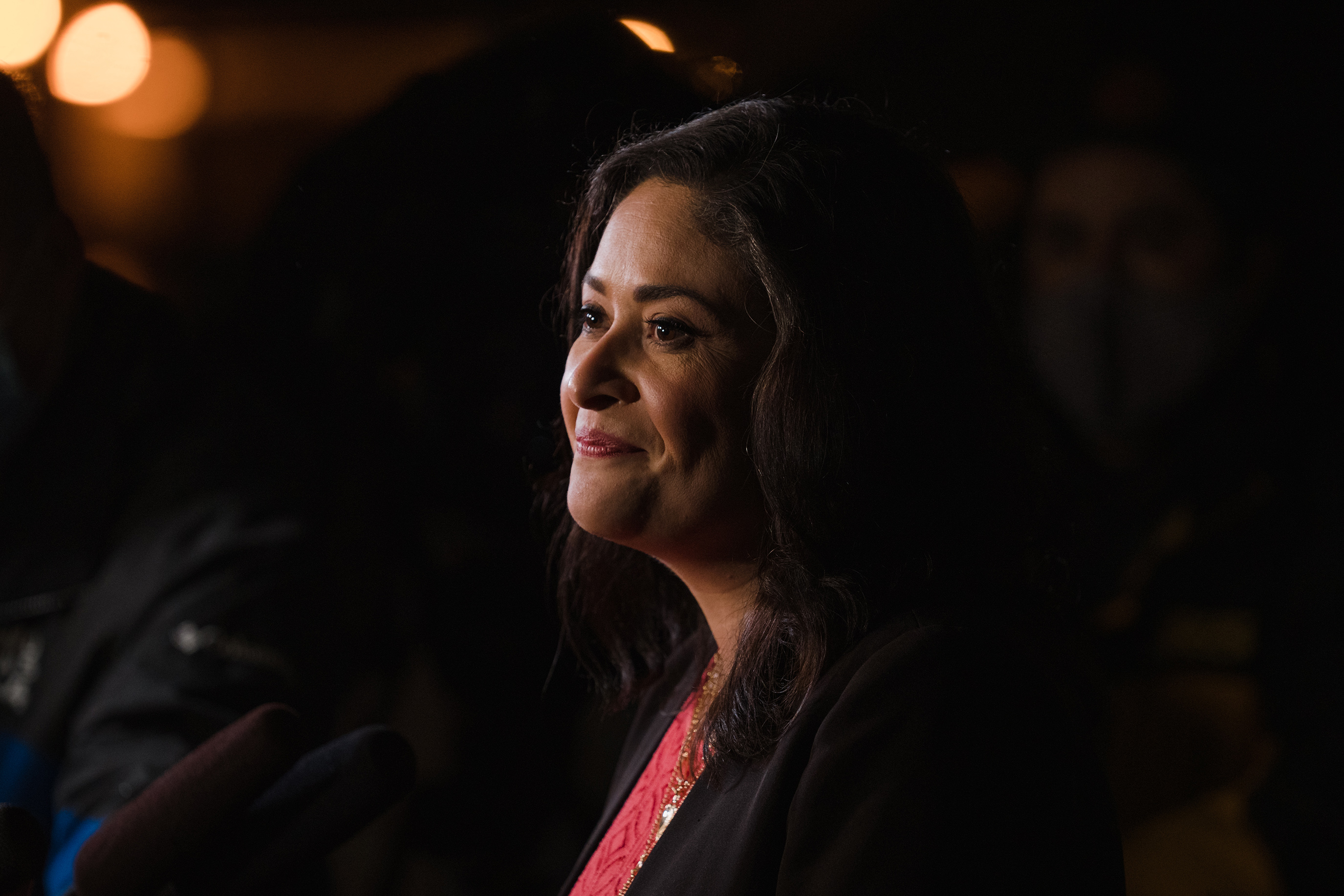 González, the daughter of migrant farmworkers, came to Seattle from central Washington to attend law school. She worked for years as a civil rights attorney before entering the public sector.

Shortly after her election to the council in 2015, González spearheaded efforts to require employers to give more notice to workers when writing work schedules. She also worked with colleagues to hone stricter labor standards for hotel workers and led efforts to provide free legal defense for immigrants and refugees.

González quickly became the council’s point person on police reform, an extension of her work as a civil rights attorney pursuing cases involving cops. She ushered through a new slate of accountability measures, some of which were later undermined by a contract with the city’s largest police union. González voted in favor of that contract.

González was also an original sponsor of the city’s first effort to tax large businesses — the so-called “head tax” — effectively marking the end of her working relationship with the city’s business groups.

Following the protests of 2020, González took a turn away from her past police reform work, saying that it fell short. Policing needed a more fundamental change, she argued, and voiced her support for budget cuts to the Police Department by up to 50%. In the months that followed, she backed away from a hard number, but it stuck and proved an effective campaign attack line for Harrell.

With Sara Nelson’s likely victory over Nikkita Oliver for the open seat on the council, Harrell will face a council that’s still progressive, but whose ability to muster veto-proof majorities will be hampered. The council’s exact makeup remains in flux: socialist Councilmember Kshama Sawant is facing a recall election on Dec. 7. In the context of a difficult Election Day for Seattle’s progressives, the outcome is anything but clear.