Infrastructure legislation could open doors to women in building trades

Congress is debating ways to improve training programs for women — and everyone — in the building trades. 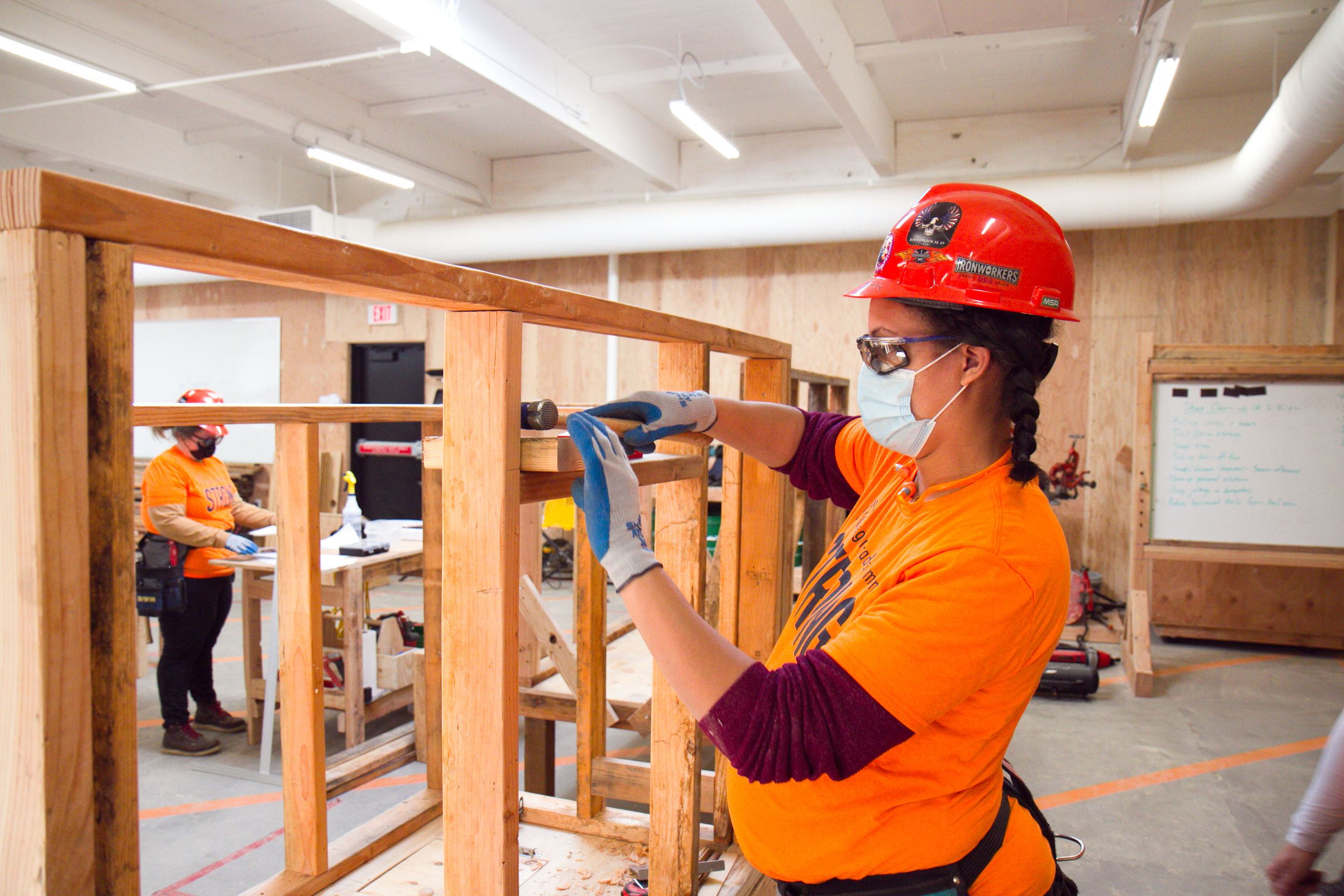 In Oregon, roughly 8 percent of apprentices are women, twice the national average. (Courtesy of Oregon Tradeswomen)

Lupe Trejo has spent much of the pandemic counting herself fortunate.

Trejo, a mother of six who lives near Washington, D.C., worked in retail and restaurants for years before starting a steamfitter apprenticeship in 2017.

When the pandemic hit, Trejo, who is Latina, watched many of her former colleagues lose jobs as the restaurants they worked in went dark. But Trejo’s work helping to build a $3 billion expansion to a semiconductor plant barely paused, while her pay climbed, to $34.95 an hour, as she entered the fifth and final year of her apprenticeship.

“I’m able to put food on the table without any assistance from the welfare system,” said Trejo. I’m able to pay bills on time, to purchase a vehicle from a dealership, and I’ve been approved for a home mortgage.”

But very few women — and even fewer women of color — enter and thrive in the building trades as Trejo is doing. Fewer than 11% of payroll employees in construction are female, and when it comes to the industry’s nonoffice jobs that require working with tools, the share is even smaller, 4%. Meanwhile, nearly 89% of construction employees are white (including some Hispanic people). In Trejo’s union, women make up just 1% of members, and women of color even fewer, she said.

Domestic spending bills being considered by Congress represent a historic opportunity to change those numbers with new dollars for training, advocates say. The $1 trillion infrastructure bill recently passed by Congress is expected to create hundreds of thousands of jobs, if not millions, repairing roads, ports and bridges; electrifying the power grid; replacing aged pipes; and expanding high-speed internet. The framework for President Joe Biden’s $1.75 trillion domestic spending bill passed by the House includes nearly $30 billion in workforce training and other investments that tradeswomen and workforce experts say could help recruit, train and retain women and people of color, who’ve been marginalized by sexism and racism within the construction industry

Hostility to women, along with opaque pathways into the trades that favor friends, brothers, in-laws and other relatives (known as the “FBI”), has combined to drive down the number of women and people of color. Even amid a severe shortage of skilled trades workers that has left employers scrambling to fill openings, the barriers to entry for women remain high.

This story about women in construction trades was produced by The Hechinger Report, a nonprofit, independent news organization focused on inequality and innovation in education. Sign up for our higher education newsletter. 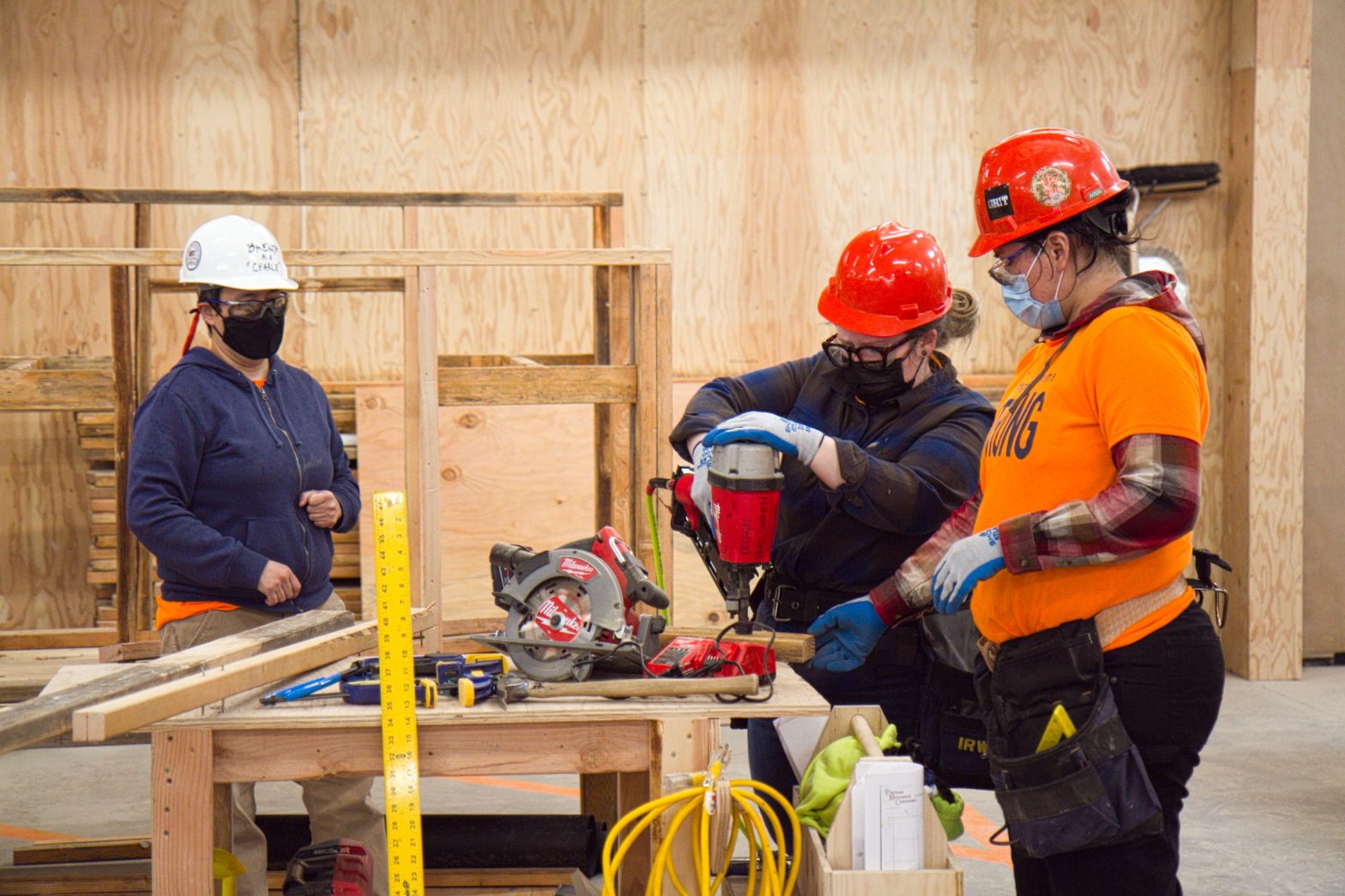 “The only way that our country can leverage the investments made under an infrastructure deal is by making sure women and people of color have access to, and are able to have success in, jobs that are going to be created under that package,” said Katie Spiker, managing director of government affairs with the National Skills Coalition, a nonprofit policy group.

“It’s the only way businesses will be able to meet the demand that this kind of investment creates,” she added, “especially given the challenge businesses were having in finding skilled workers ahead of the crisis, which is also exacerbated. It’s also the only way we are going to reach an actual inclusive economic recovery.”

As the building trades face a “silver tsunami” of retirements, many infrastructure jobs (most of which are in construction) are already going vacant. According to a September study by the National League of Cities, more than 30% of infrastructure jobs are hard to fill, meaning it takes longer than expected to fill them, and 32% of manager positions in infrastructure are open for more than 45 days.

In part because of the high numbers of infrastructure workers retiring — an estimated 2.7 million over the past decade — some employers appear to be more open to recruiting women now than they were in the past. Women’s share of construction trades jobs increased from about 3% to 4% over the past five or so years, according to Ariane Hegewisch, a senior research fellow at the nonprofit Institute for Women’s Policy Research. Meanwhile, construction was one of just two industries in which the number of women workers increased since February 2020, she said.

And yet many employers remain reluctant to hire or advance women.

“Back in the early 2000s, I used to tell people we were stuck in the early ’60s, and I’m not sure how much more we’ve progressed,” said Ali O’Neill, who runs a construction company near Portland with her husband. “There tends to be a culture where those men want their job sites to be a little bit of a boys club, and maybe they are willing to tolerate one or two women if they stay quiet and don’t cause a fuss, but they don’t want to see a job site that has 50% women.” 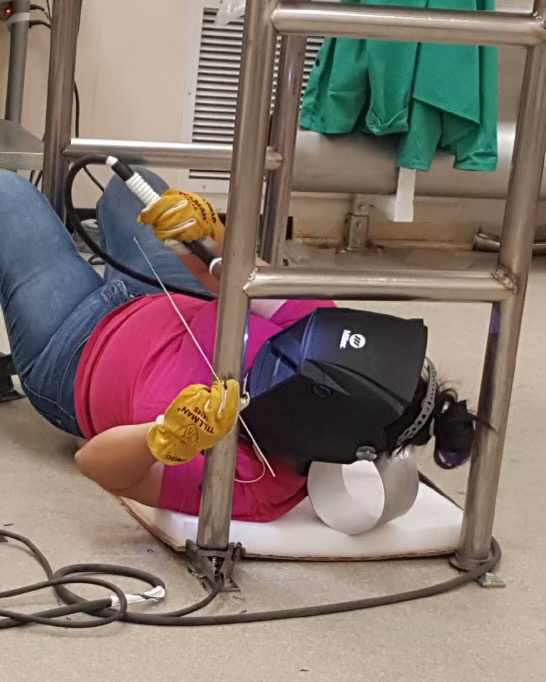 Lupe Trejo entered a steamfitter apprenticeship in 2017. In her union, only about 1 percent of members are women, she said. (Courtesy of Lupe Trejo)

Lupe Trejo entered a steamfitter apprenticeship in 2017. In her union, only about 1 percent of members are women, she said. (Courtesy of Lupe Trejo)

That culture discourages not only female workers, but also men who might ally with women to transform the trades, O’Neill said. The macho, insiders-only atmosphere “also alienates some of the white male allies who are just like, ‘This is an awful work environment; I’m going to do something else.’ ”

Indeed, attrition is high across the board for apprenticeships, but it’s particularly high for women, and remains a key reason why the number of tradeswomen has barely budged over decades. (There’s no single national figure on attrition, but studies have consistently shown that it’s higher for women; one study found that 70% of female carpenter apprentices left their programs, compared with 53% of men.)

“We are seeing an increase in interest,” said Meg Vasey, a former electrician who runs Tradeswomen Inc., an advocacy group in Oakland, California. “We are still really struggling with the retention numbers.”

While Biden’s infrastructure proposal called for $100 billion in workforce training, that money was left out of the Senate version of the final bill. So, too, was an amendment sponsored by Sen. Kirsten Gillibrand, D-New York, that would have set a goal that 15% of labor hours on projects be completed by apprentices, along with support for training and child care and requirements for respectful workplaces.

Now advocates are pinning their hopes on the domestic spending bill before Congress. A draft released earlier this month contains tens of billions for workforce development including trades pre-apprenticeship and apprenticeship programs, left them encouraged. So, too, does the bill’s commitment to making child care more affordable: The lack of child care often makes a career in the trades, with its demanding, irregular hours, a nonstarter for women.

Tradeswomen groups are also calling for updates to and greater enforcement of existing rules, such as a decades-old order that federal contractors strive to ensure that 6.9% of work hours on projects be completed by women.

“The percentages of people of color and women are going up and there’s a greater attention to equity, but we definitely need the federal government’s attention to bring that all to scale,” said Connie Ashbrook, co-chair of the National Taskforce on Tradeswomen’s Issues, a coalition of groups and individuals that advocate for females in the trades.

Ashbrook and others also point to pockets of success in diversifying the trades. In Oregon, 8% of apprentices are female, twice the national average. The state allocates one half of one percent of its federal transportation dollars to preparing women and people of color for highway construction jobs, a funding model that could be replicated elsewhere.

Oregon Tradeswomen, a Portland nonprofit, runs a program to encourage workers to speak up against bullying and harassment, as well as a pre-apprenticeship program to recruit and prepare women for construction. Groups like this, which try to boost women from low-wage jobs into the well-paid, unionized work of construction, could be expanded with federal dollars.

Kelly Kupcak, executive director of Oregon Tradeswomen, said the organization has seen a surge in interest during the pandemic from workers fleeing fields like hospitality, restaurants and retail.

Tzeo completed the group’s pre-apprenticeship program this past summer. Like many young people, she had set off for college — in her case, Portland State University — before realizing it wasn’t for her and dropping out. At her high school in Beaverton, Oregon, “they never talked about the trades,” she said. “They were really adamant about college.”

After leaving Portland State, Tzeo found work at Jamba Juice, making $13 an hour. Then she had a daughter in March 2020 and decided to stay home for a time. “It wasn’t worth being away from her, missing out on her growth, for $13 an hour,” she said. But being an electrician would give her the chance to support her family while doing work she enjoys, Tzeo said.

Trejo, the steamfitter, has found ways around the child care challenges that stop many women from entering the trades. With her apprenticeship wages, she can pay a salary to her mother, who lives with the family, to help care for her and her husband’s kids.

During Trejo’s first two years of the apprenticeship, she worked almost entirely with men. It wasn’t until her third year that she began to run across more women on job sites. But she and the 40 or so females in her union of roughly 4,000 people have also connected via a women’s committee they formed two years ago to support one another and intervene in cases of harassment or bullying.

Trejo turned to the committee when she wanted support asking her supervisors to release her from work on time so she wouldn’t run late to her apprenticeship class. The rules and power dynamics of apprenticeships are complicated, she said, and the committee “takes away the discomfort of having to approach someone yourself.”

Since Trejo started in the trade five years ago, the rate of retirements has picked up, she said. It used to be that one or two workers retired each month; now it’s closer to 10. That turnover, combined with new trades jobs generated by the infrastructure bill, could finally knock the door open to women. Said Trejo: “It’s definitely more welcoming among the newer generation.”

This story about women in construction trades was produced by The Hechinger Report, a nonprofit, independent news organization focused on inequality and innovation in education. Sign up for our higher education newsletter.