Post-election Seattle has housing density on the agenda

Mayor-elect Bruce Harrell will face a renewed conversation on zoning in the city. 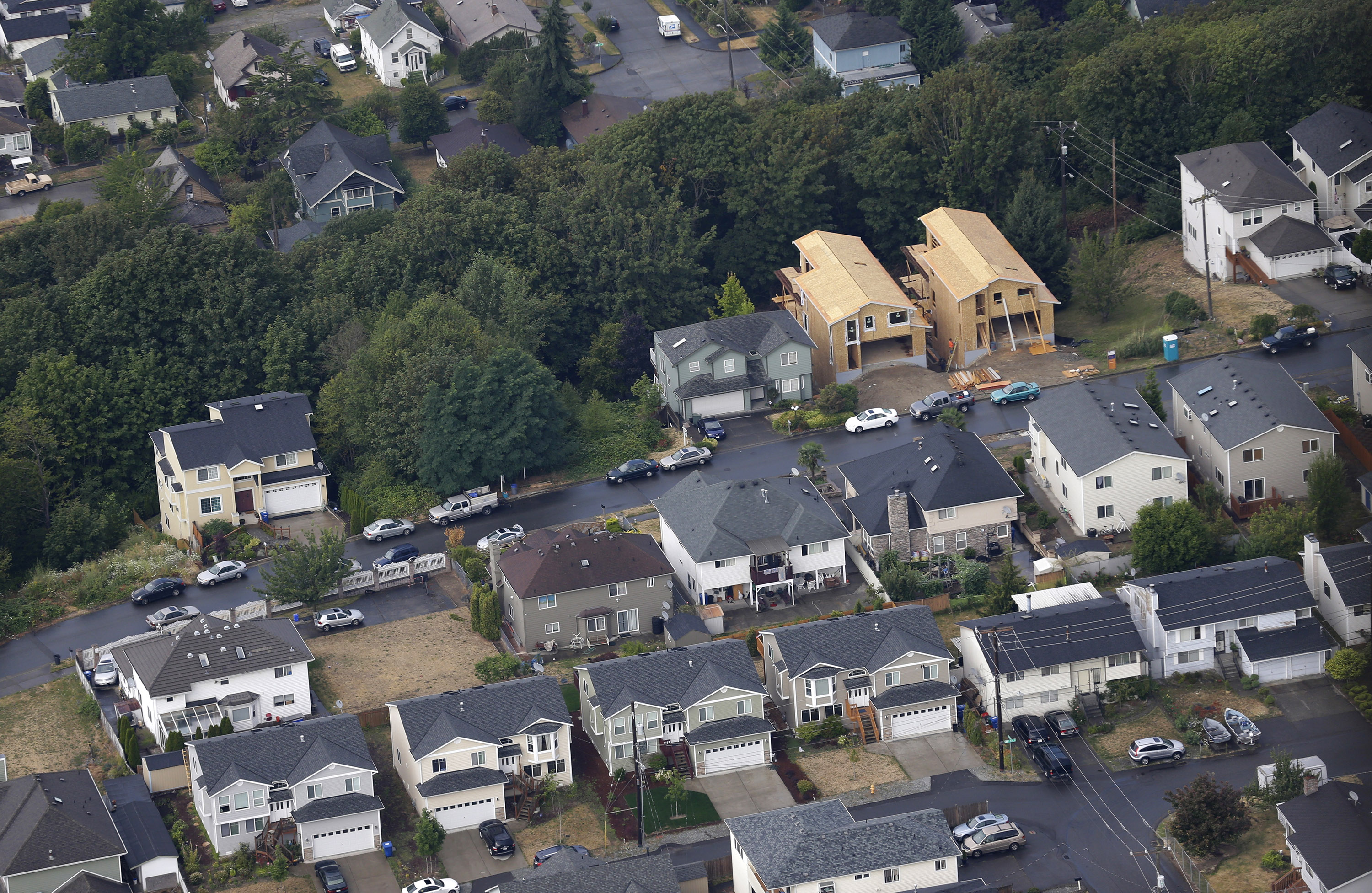 In this aerial file photo taken Aug. 2, 2014, two houses are shown under construction in a Seattle neighborhood. (Ted S. Warren/AP)

Four months before the 2015 election, a committee of hand-picked housing experts recommended that Seattle allow more density in neighborhoods mostly reserved for single-family homes. Their vision was not one of high-rise apartment buildings, but of duplexes and row homes long forbidden across most of the city.

But the committee’s plan leaked early, and the backlash was so intense that then-Mayor Ed Murray killed it in an effort to save what he viewed as more crucial recommendations.

Since that plan’s death, City Hall has taken a light touch toward adding density where little existed before. The more developed areas of the city have been allowed to grow taller, and regulations on accessory dwelling units were loosened. But restrictions on multifamily developments in the bungalowed hills of Queen Anne and Magnolia have largely been left alone.

Six and a half years later, the city is once again steeling itself for a conversation about what sort of homes should be allowed where. Amid a severe housing shortage and ever-climbing home prices, City Hall will soon crack open its Comprehensive Plan — a state-mandated 20-year roadmap for the city’s development. An update to the plan is due in 2024, but the groundwork for change is already being laid out by some elected officials and housing advocates. Their gamble is that the Seattle of 2015 is not the Seattle of today and that more people are ready for a conversation about density.

Last week’s election adds a new ingredient to the mix.

Mayor-elect Bruce Harrell and Councilmember-elect Sara Nelson both attacked their campaign opponents as wanting to “abolish” single-family zoning. Each said they support adding more density, but not everywhere.

“My opponent is fond of supporting the total elimination of single-family zoning, which is just not my narrative or approach,” Harrell said in an Oct. 14 debate. “I still believe we have hundreds of thousands of unused zoning capacity that we should aggressively pursue.”

“My position is that we already transformed single-family zones when we allowed for up to three units per lot with the accessory dwelling unit legislation,” Nelson told My Northwest.

At the same time, Councilmember Teresa Mosqueda, who has been leading many of the conversations around density in the city, was reelected by nearly 20 percentage points. In an election that was primarily about homelessness and public safety, few see the results as a mandate for one approach over the other.

In 2018, the Seattle City Council requested a racial equity analysis of the city’s current approach to housing. The guiding philosophy has been one of “urban villages” — discrete neighborhoods in which development was allowed, while the surrounding areas remain untouched.

The results of that analysis, released earlier this year, were critical of the approach — that the strategy restricted the supply of smaller and, therefore, cheaper housing, disproportionately hurting communities of color.

“The urban village strategy was seen by many as perpetuating a historical pattern of exclusionary zoning that should be examined and revised to be more racially equitable in the next plan update,” the analysis concluded.

The architect of the urban village approach, former Mayor Norm Rice, agrees it could use revisiting. “Clearly it’s probably time for a reboot from when I started versus where we are today,” said Rice, the city’s first Black mayor and a strong supporter of Harrell. “Neighborhoods have changed from where we were before.”

The city council has already begun to steer the conversation toward altering what’s allowed in the neighborhoods previously known as single-family zones. In October, the body changed the name to “neighborhood residential.”

The change was, on the one hand, surface level. But Mosqueda said it more fairly describes the reality of those neighborhoods — that within them already exists some multifamily development, largely grandfathered in from before the city restricted development.

“This conversation that we're going to have in 2022 really needs to start from an understanding of what our neighborhood fabric used to look like and what it currently has… so that if we talk about changes, people know what point it's changing from,” said Mosqueda.

Along the West Coast, Washington has been the slowest to amend its primarily single-family zones. Both Oregon and California recently passed laws making it easier to put more homes on single-family lots. Minneapolis made similar changes in 2020.

That shift in neighboring states, combined with the racial reckonings and disparate impacts of COVID-19, have changed the conversation since Seattle last discussed amending zoning rules, said Patience Malaba, director of government relations and policy with the Housing Development Consortium of Seattle-King County. Beyond policing, the protests in the summer of 2020 spurred deeper commitments from government officials to address systems that have racist roots.

“One of the meaningful ways that we can do that is to make sure that we become an economically inclusive community,” said Malaba. “And we can do that with our Comprehensive Plan update by making sure that our growth strategy enables us, as a community, to have diverse types of housing that people can afford to rent, but also can afford to have access to as home ownership opportunities.”

Polling shows support for more density. In a recent survey conducted by the Seattle Metropolitan Chamber of Commerce, 64% of respondents said they supported new housing in their neighborhoods; 62% favored allowing duplexes and triplexes in single-family neighborhoods. 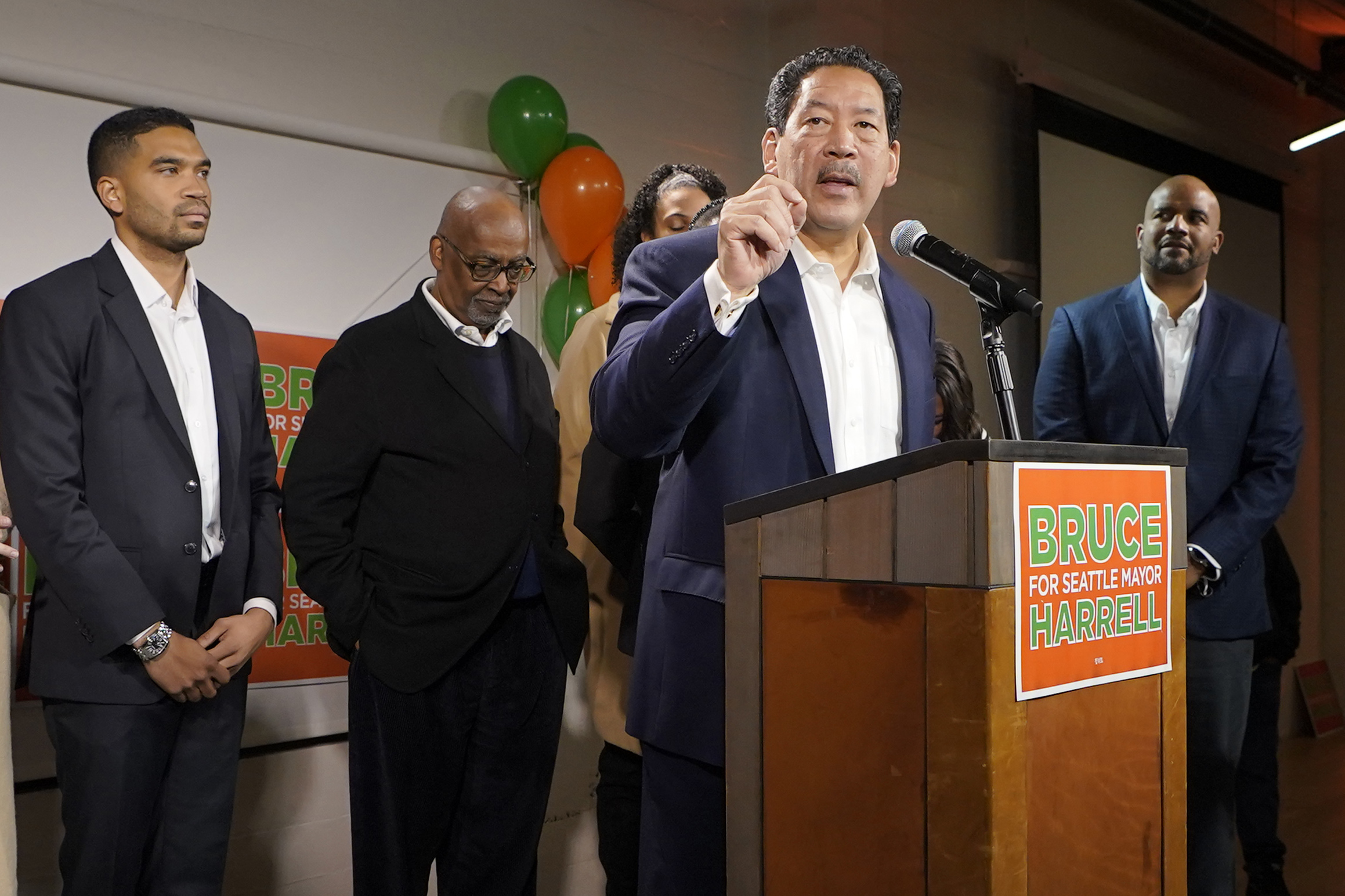 Bruce Harrell, who ran against Lorena González in the race for mayor of Seattle, speaks at his election night gathering in Seattle, Nov. 2., 2021. González conceded the race after an updated vote tally on Nov. 4 showed Harrell had an insurmountable lead. (Ted S. Warren/AP)

Bruce Harrell, who ran against Lorena González in the race for mayor of Seattle, speaks at his election night gathering in Seattle, Nov. 2., 2021. González conceded the race after an updated vote tally on Nov. 4 showed Harrell had an insurmountable lead. (Ted S. Warren/AP)

Harrell, through a spokesperson, didn’t respond to questions about his plans for zoning. Backers of his on the campaign trail, however, expressed confidence in his approach.

The chamber of commerce mostly sat out the 2021 election after a bruising 2019, but supported Harrell as a city council member and opposed efforts by his opponent, Lorena González, to levy new taxes on business. The chamber has long advocated looser zoning rules to allow more development, offering such changes as an alternative to raising revenue through business taxes.

The chamber’s new CEO, Rachel Smith, said that is still true today. At the same time, when asked about Harrell’s campaign statements, Smith agreed with him that talk of eliminating the zones was not helpful.

“I think talking in absolutes is both inaccurate and can be polarizing,” she said. “I think it's kind of like saying, ‘We're going to ban all cars from the city.’ Do we need to take serious measures to reduce our carbon emissions from vehicles? Of course. Should we tell everyone we're going to ban cars from the city next year? No. It's not realistic and it's not going to inspire people to action and change.”

Dan Bertolet, a researcher with the pro-density Sightline Institute, said that, from his perspective, González was the stronger candidate on zoning. Under her administration, the city would move faster to make such changes, he said. At the same time, he said Sightline has shifted its focus to state-level reforms, calculating that is time better spent.

“The process to do these rezones is already so long and drawn out,” he said. “Administrations can change and then all of a sudden the initiatives to do things like rezones can lose their momentum and get dropped.”

From former Mayor Rice’s standpoint, the best thing a Harrell administration can do is to listen to communities. The issues are thorny and disappearing into a backroom and emerging with the answers won’t go over well.

“You’ve really got to build it around community needs and wishes in a way that is sustainable and economical,” he said.

For Ab Juaner, equitable development manager with Puget Sound Sage, those needs and wishes must center the most vulnerable: the communities of color at highest risk of displacement. For Juaner, the comprehensive plan update is the time to create opportunities for more investment and ownership opportunities for the community. Who’s in office is less of a concern.

“We have made a lot of progress in encouraging BIPOC community led development,” said Juaner, “and we see the city continuing to move in that direction regardless of who’s in office.”