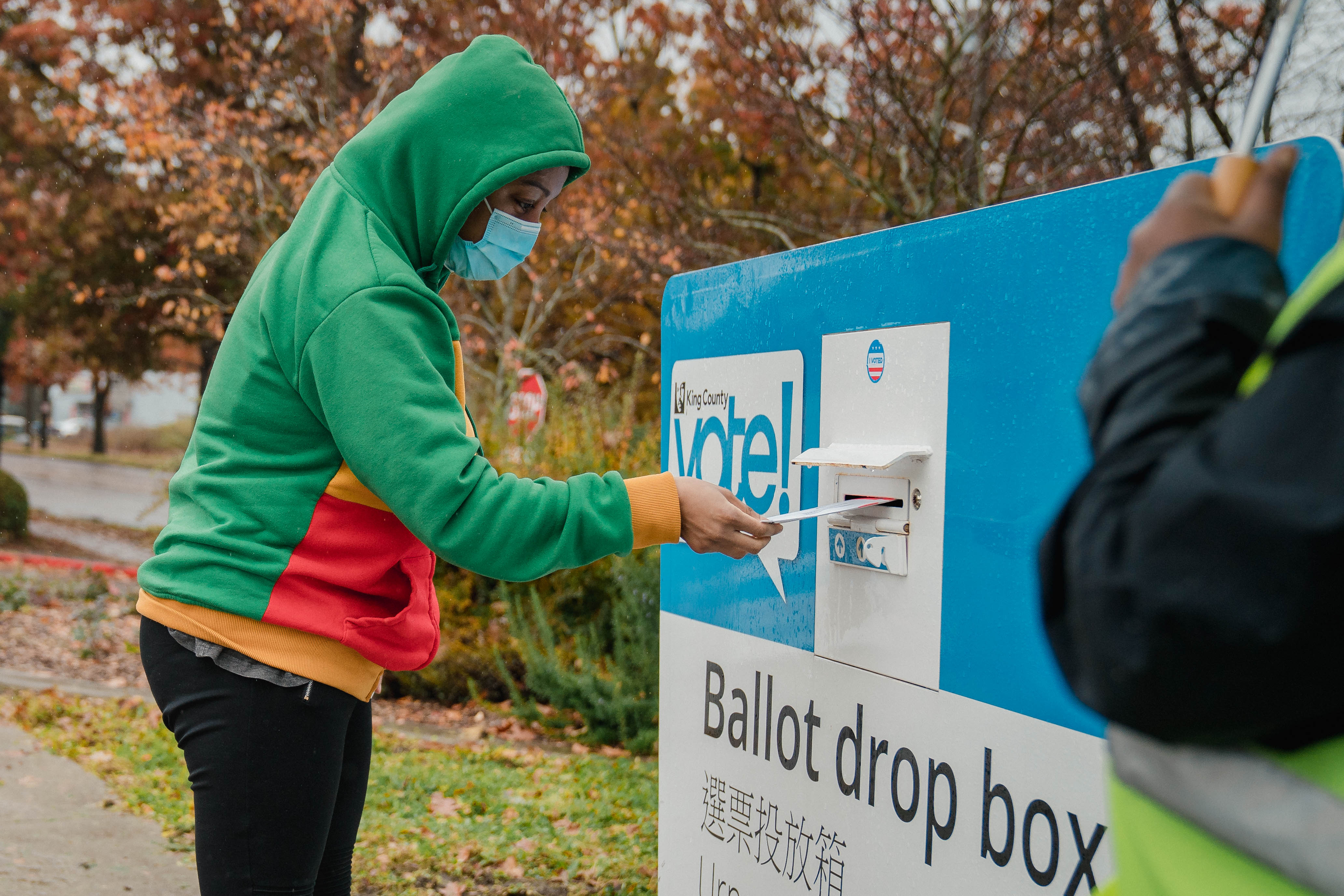 Meron Worku drops off her ballot at Rainier Beach Community Center in this Nov. 3, 2020, file photo. (Jovelle Tamayo for Crosscut)

When Seattle last held a general election, in 2019, COVID-19 was unknown, “defund the police” lived on the fringes and Donald Trump was president. For everything that’s happened in this city since — the pandemic shutdowns, the protests against police violence, the worsening homelessness crisis — none of it has been tested at the ballot box.

That will change today, as voters living in a new world will have the chance to choose new leadership. They will do so, polls suggest, with a shared frustration over homelessness, public safety and housing affordability, but with different visions for the best path forward.

Seattle voters will select among eight people in four races to run the city’s government — Teresa Mosqueda and Kenneth Wilson for the eighth seat on the Seattle City Council; Nikkita Oliver and Sara Nelson for the ninth; Ann Davison and Nicole Thomas-Kennedy for Seattle city attorney; and Lorena González and Bruce Harrell for mayor.

In three of those races, there is no incumbent. Mayor Jenny Durkan opted against seeking a second term; González left behind her seat to run for mayor; and Pete Holmes was squeezed out of the race for city attorney in the primary. Only Mosqueda is asking voters to return her to the council position she currently holds.

The choices before voters are fitting for the moment. The candidates’ differences are clear and premised on competing interpretations of what residents really want. Two open abolitionists find themselves on the ballot alongside that rarest breed in Seattle, a Republican who shared a party and a ballot with Trump.

“The city seems more divided politically than it’s ever been, in my experience,” said Sandeep Kaushik, a lobbyist and political consultant who’s supporting political action committees for Nelson and against Thomas-Kennedy.

The gulf between candidates mirrors some of the same divides between Democrats at the national level. At issue is whether the systems that exist today can or should be saved. Council candidate Nikkita Oliver and city attorney candidate Nicole Thomas-Kennedy are each self-declared police abolitionists. Mayoral candidate González has previously expressed support for cutting the Seattle Police Department’s budget by 50% and continues to call for new ways of thinking about law enforcement.

Their opponents — Nelson, Davison and Harrell — have advocated for more funding for police and more officers on the streets. The answer to the problems of policing, they argue, is not to starve it of resources, but to invest in it and to make it better.

On homelessness, Nelson, Harrell, Davison and Kenneth Wilson have made the presence of encampments a central issue of their campaigns and have called for more emergency shelter and less tolerance of public camping. Their opponents, on the other hand, have said the answer is to tax the rich and use that money for more permanent supportive housing.

Observers from differing ends of the political spectrum note that this election is, in many ways, about “calling the question” of the kind of city Seattle ought to be — a bet that, given a clear choice, voters will side with their point of view. In two of the four races in particular — for city attorney and the ninth council seat — the candidates and their backers can often be found simply repeating the words of their opponents.

“The choices presented force people into a decision; you’ll see that more clearly than in previous elections,” said Dujie Tahat, a political consultant not directly involved with any Seattle races this year, but who worked on Oliver’s 2017 campaign for mayor. “You have Black- and brown-led grassroots candidates who represent a different kind of political orientation who are calling questions about the fundamental way that we govern.”

“What’s unusual is that what we’re saying about Nikkita and what Nikkita’s saying about us is not actually that different than what we’re saying about ourselves,” said Ben Anderstone, a political consultant advising  Nelson on her race for the council’s ninth seat. “I think that at the end of the day it comes down to, you probably don’t like how things are going right now. What kind of change do you want? Do you want reform or do you think we haven’t gone far enough?”

The stakes of the election are clear in the river of money flowing into the campaigns. Harrell has raised $1.3 million toward his campaign, while attracting $1 million more in independent expenditures, much of it from real estate and developer tycoons like John Goodman, the Petrie family and Vulcan. González has raised close to $1 million for her campaign. Labor has spent another nearly $1 million in independent expenditures on her behalf, most of which comes from the hotel workers’ union UNITE HERE.

Nelson, Oliver, Thomas-Kennedy and Davison have all raised close to or even more than a half-million dollars.

For Scott, the field organizer for Oliver, the context of this year’s election echoes one a century ago, when the city was reeling from another pandemic and workers were rising up to strike. Like 1920, this period feels historic. “It’s a question of whether we want to go in the direction of a more inclusive city than an exclusive one,” he said.

Kaushik said this election is the culmination of a more demanding left wing in Seattle. “I think with the left moving really far left, they’ve thrown down a gauntlet and said people have to choose,” said Kaushik. “They’re forcing people to choose sides. I think if you’re a typical Seattle voter it’s difficult to feel like you’ve got a foot in both camps.”

But Crystal Fincher, a political consultant who has supported Oliver, said the solutions being demanded by the left are commensurate with the scope of the issue. “Right now, these are issues where we're at such a point of crisis in so many different ways that someone is going to have to say ‘This is how we're moving forward,’ and some people aren't going to be happy with that,” she said.

Unlike past contests, when Ed Murray and Jenny Durkan laid claim to both business and labor backing, this year has more pronounced political slates. But that doesn’t mean one group will rise and fall together — polling suggests it’s possible Seattle could elect both an abolitionist and a Republican in the same election.

The results — which Crosscut will post here — may not be fully known on election night. Washington’s vote-by-mail system means ballots will be counted over several days. In the past, the early returns favored candidates viewed as more moderate, while late-counted ballots skewed heavily progressive.