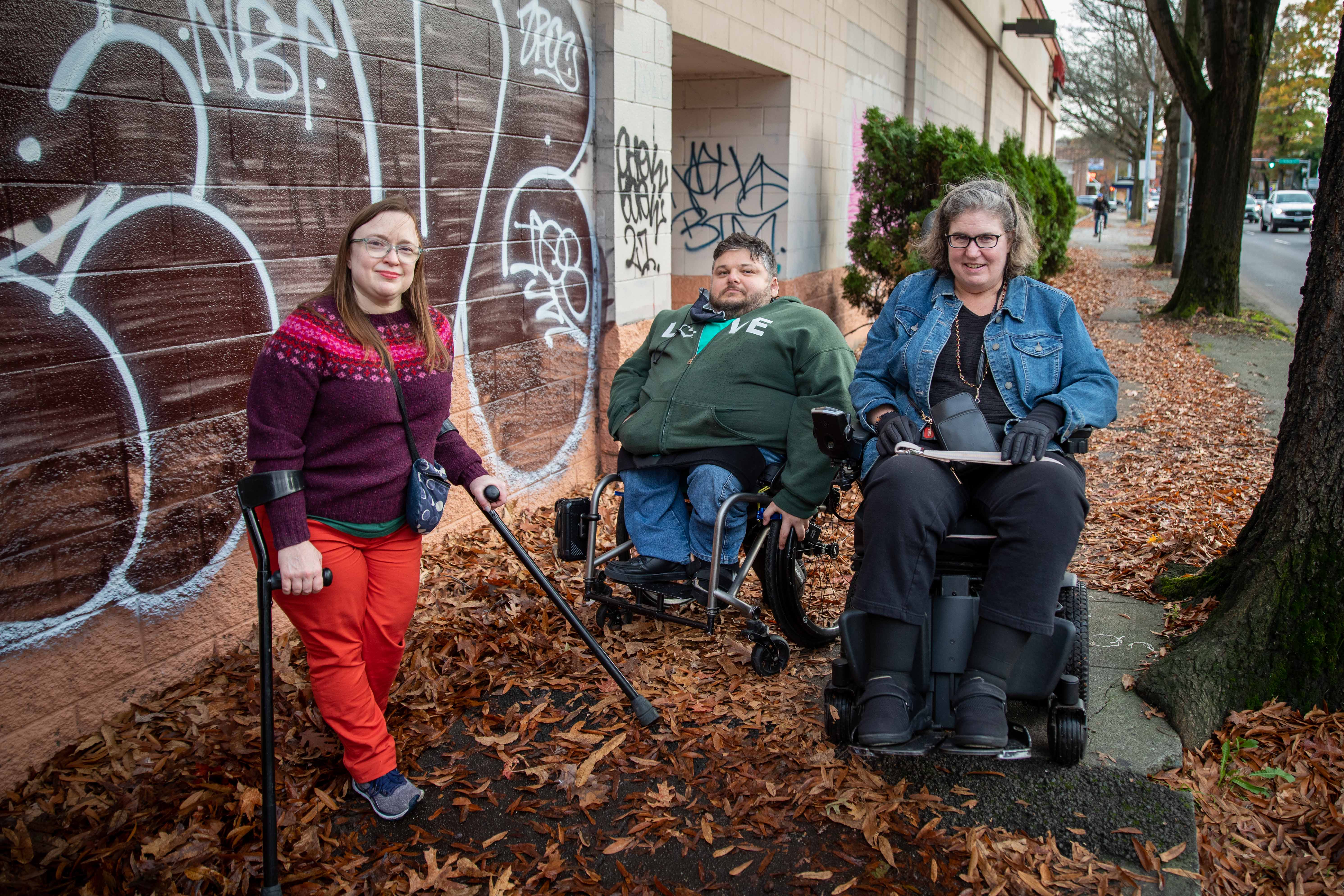 Clark Matthews, center, poses with his partner Laura Cohen, far left, and fellow disability rights activist Erin Musser (far right) along a stretch of Rainier Avenue that’s difficult and potentially dangerous for them all to use. Cracked and uneven sidewalks take away equitable access to people with disabilities, Matthews said. More than 13% of people in the US have limited mobility, according to the Centers for Disease Control and Prevention. (Lizz Giordano for Crosscut)

Sick and tired of being whacked by unruly blackberry bushes while bike commuting to his job in Seattle, Bob Svercl started lugging gardening supplies around with him.

The city didn’t respond to his requests to clear the spreading vines from the South Park bike path, “so I eventually bought some pruning shears and garden gloves. And I carry them in my bike bag,” Svercl said.

The tools came in handy one weekend in October when Svercl, along with a handful of other neighbors, set out to clear a section of sidewalk overtaken by vegetation. A stretch along Orcas Avenue down the street from Dearborn Elementary was just a couple of feet wide in some places. After a few hours of work, the group discovered to their surprise a 12-foot wide, crack-free, level sidewalk the city built in 2017, buried for years beneath leaves, branches and blackberry brambles.

That section was one of thousands partially blocked or impassable in the city. Some stretches of sidewalk just need to be pruned or swept, but many others, cracked and uneven, need a complete replacement or repair. According to an exhaustive survey mainly done by Seattle Department of Transportation interns, nearly half of Seattle sidewalks are currently rated in fair or poor condition.

A report released last year blamed lax enforcement of sidewalk ownership laws (due to a cumbersome process that includes a vote by the City Council) and inadequate city investment for the quality of the city’s sidewalks. Fixing the problem would require between $500 million and $1.33 billion, according to a city estimate. 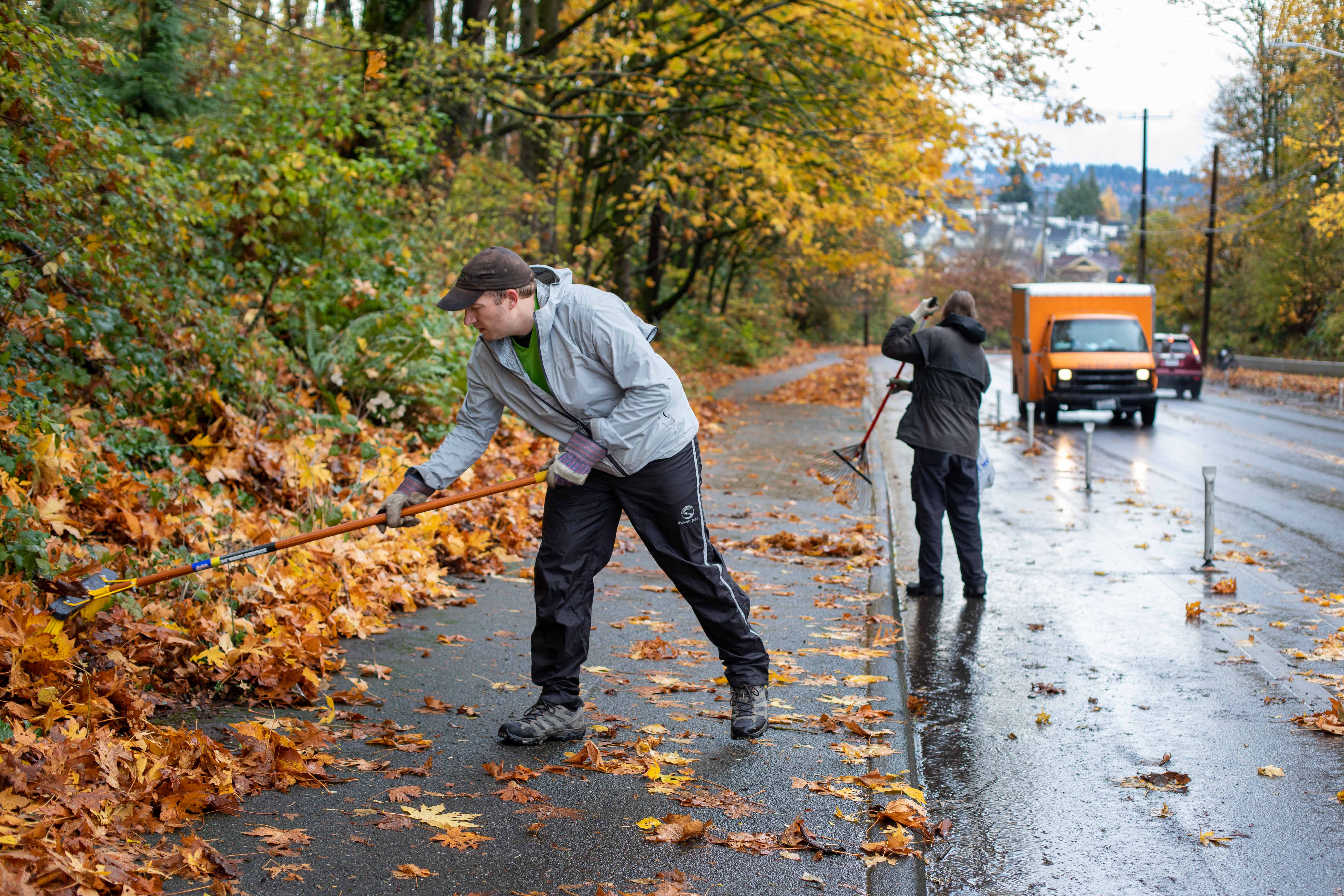 Responsibility for sidewalk maintenance and repair falls to property owners in Seattle. Snow must be shoveled, vegetation removed, bumps leveled and cracks repaired by whoever owns the abutting property.

Not all homeowners are aware of this obligation. If they don’t fulfill it, there is little recourse for the city due to the arduous state-imposed process cities need to follow to recoup costs from property owners, which gives the owners little incentive to make fixes themselves, the report concluded.

A large proportion of Seattle sidewalks –- between 80% and 85%, the report estimates – fall under this category: the responsibility of a private owner.

“I know so many folks who use power chairs to get around, who exclusively ride in the street, because the sidewalks are in such bad shape,” said Clark Matthews, a creative producer for Disability Rights Washington's Rooted in Rights team and wheelchair user himself.

Last year, Matthews took a nasty spill along a stretch of Rainier Avenue, going between his apartment and a grocery store. An uplift in the sidewalk that was filled in left a steep incline, causing Matthews to tip over, hit his head and roll into the street, scattering his groceries into the road.

He now crosses the street to avoid that section.

“All it takes is one panel of the sidewalk to be completely unusable, the whole area becomes unusable,” said Matthews.

City Councilmember Andrew Lewis petitioned for an audit of city sidewalks after hearing from constituents that requests for sidewalk repairs often weren’t getting addressed.

“I requested an audit, because frankly I haven’t really seen that we are putting the resources into sidewalk repair, replacement and expansion that we should be. ... I’m hoping that the audit will lead to sidewalks being a bigger budget priority for the Council,” Lewis said. “I don’t think there is anything more fundamental than basic city infrastructure like sidewalks.”

The city either needs to take on responsibility for maintaining the entire network of sidewalks, Lewis added, or there needs to be an effective way to get property owners to meet their obligations.

To increase compliance with state and city sidewalk law, the audit recommends the city consider implementing a Buy, Sell, Repair Ordinance, requiring owners to bring sidewalks into compliance before a property is sold. Oakland, California, implemented a similar law in 2019, requiring that sidewalks be inspected by a contractor and repaired if necessary before a title transfer of property, the report cited. The city reported a 62% increase in repairs to private sidewalks the year following the new ordinance.

Recognizing that for some Seattle homeowners replacing a few feet of sidewalk is unaffordable, the audit also recommends implementing a cost-sharing program for low-income households.

In a letter in response to the audit, the Seattle Department of Transportation said the agency needs an additional $3 million to $4 million per year to implement a five-year maintenance plan. The additional funding would constitute more than doubling the typically yearly sidewalk repair budget of $1.4 million.

The agency can bevel about 700 sidewalk segments per year, a semi-permanent repair that grinds down the edge of a sidewalk so the two sections better match in height. In the 2017 survey, SDOT identified roughly 93,000 vertical height differences and 20,000 obstructions  – both vegetation and permanent obstacles blocking the sidewalk system.

Find it, Fix it, Maybe

Rachael Ludwick submits a Find It, Fix It request about once a week. The mobile app allows people to report anything from abandoned vehicles to dead animals, illegal dumping and potholes.

“Sometimes it feels like it makes a difference,” Ludwick said. “Sometimes, I feel like I’m just generating data.”

In rare cases, a copy of a random work order shows up in Ludwick’s email inbox, confusing them for a few seconds before realizing it’s likely about a recent Find It, Fix It request.

It’s also personal for Ludwick, who mostly bikes and walks around the city. Vision loss in the left eye makes it difficult for Ludwick to see cracks and bumps in her path.

“I used to report issues on Rainier Avenue South but there's really no point – some owners clear their sidewalk of weeds, leaves or snow, many don't and the city really has no way to make it happen,” Ludwick added.

The city's current budget does not meet the needs for sidewalk repair in Seattle, said Mariam Ali, a spokesperson for SDOT, in an email. “Because our resources do not allow us to repair every sidewalk issue immediately, we must prioritize our work based on a variety of factors including equity, severity, hazardousness, cost, and the feasibility of cost-effective solutions.”

Inspired by Svercl, Ludwick also started carrying portable trimmers on their bike and joined Svercl in the October cleanup along Orcas.

Some sidewalks are extremely impassable there, said Ludwick, who doesn’t live far from that stretch. They argue the city’s approach makes that inevitable.

“It just doesn’t make sense to me that if you are in a car and you can drive, the city cares about your mobility,” said Ludwick. “But if you aren’t, the city thinks the property owners should fix the thing that keeps people from being able to walk or roll.”

“But I don't know the solution. The amount to fix it is a huge amount,” Ludwick added.

Svercl’s victory was short-lived along Orcas. After the group spent about two hours uncovering a section in South Beacon Hill, a few days later windy weather re-covered the sidewalk with bright colored leaves and small twigs.

“You do what you can. It will eventually get dirty and covered up, but at least for a little while, we were able to clear it out,” said Svercl.

This was the second year in a row Svercl cleared out that section of sidewalk along Orcas in South Beacon Hill. And on snowy days, he’s been known to shovel out his bus stop. He’s faced some criticism. People tell him this task is the city’s responsibility, not his.

“I agree with that. But at the same time, it does more good to clear part of it myself rather than wait days or weeks for the city to add it to the schedule,” Svercl added.