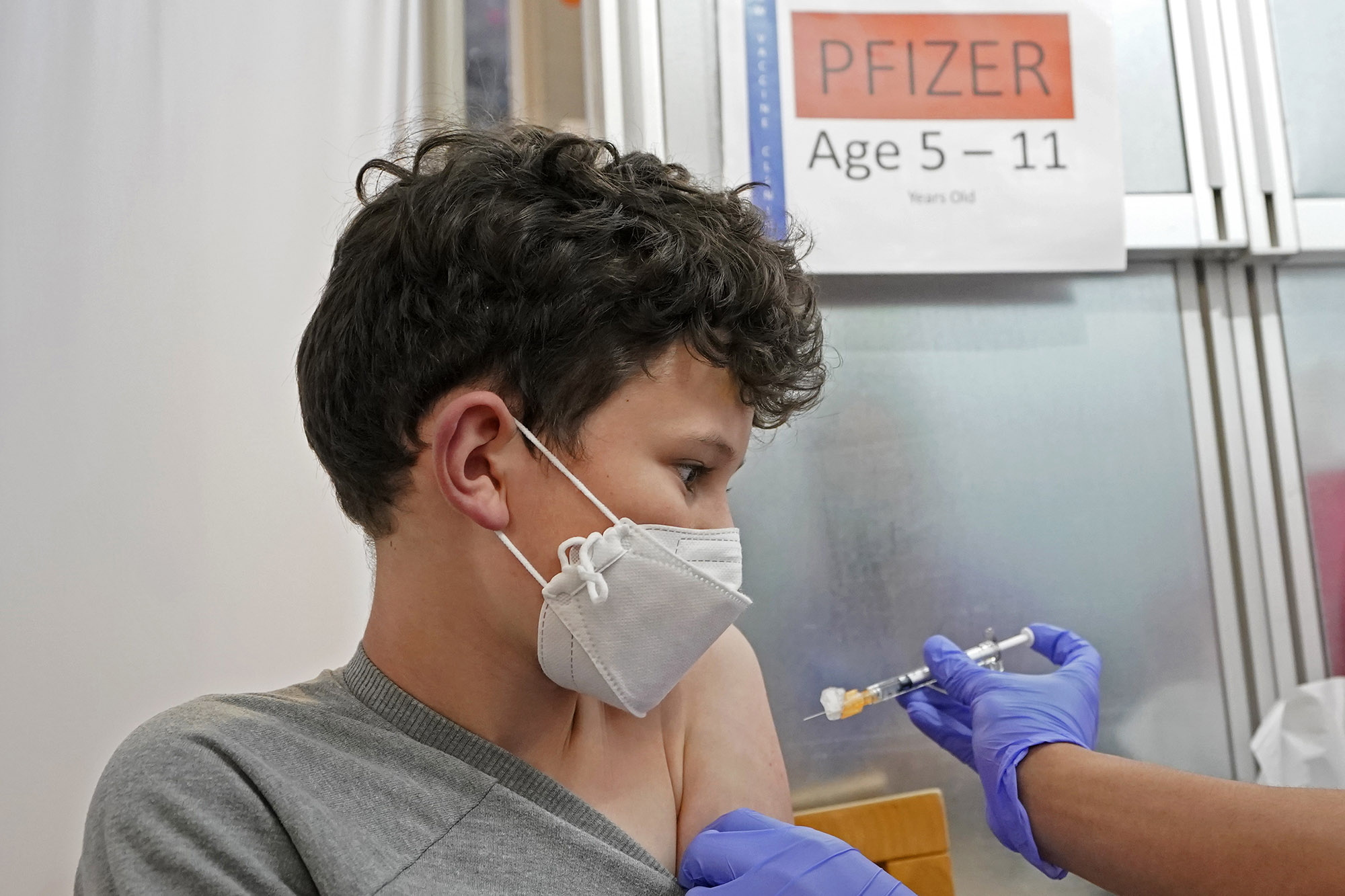 Leo Hahn, 11, gets the first shot of the Pfizer COVID-19 vaccine, Nov. 9, 2021, at the University of Washington Medical Center in Seattle. Last week, U.S. health officials gave the final signoff to Pfizer's kid-size COVID-19 shot, a milestone that opened a major expansion of the nation's campaign to vaccinate children as young as 5. (Ted S. Warren/AP)

At Aki Kurose Middle School, Roderick Patel’s son Ezra, 5, sat quietly on his dad’s lap, eyes fixed on an animation on a phone, as he bared an arm for his first shot of COVID-19 vaccine.

“Yay!” cheered his mom, Amy Saari, a teacher at the school. She gave the Bryn Mawr Elementary kindergartener a hug and a kiss as soon as he got the shot.

“With him being in school, I wanted him vaccinated as soon as possible,” Saari said afterward. “It’s a relief.”

Nearly all children attending Washington’s K-12 schools are now eligible for a COVID-19 vaccine, to the relief of many parents. Four weeks ago, the Food and Drug Administration cleared Pfizer’s pediatric dose of its vaccine for children aged 5 to 11 for emergency use.

Since the start of November, at least 116,000 children in the 5-to-11 age group in Washington state have started the vaccination process, according to the Washington Department of Health. That is about 17% of children in that age group. The vaccine rate for children 5 to 11 so far puts Washington slightly ahead of the U.S. in general, which logged about 14% in that group as of Tuesday, according to the Centers for Disease Control and Prevention.

It’s not clear how long the high demand will continue. National polling suggests that not all parents will rush to get their youngsters vaccinated against COVID-19.

These numbers are not all that surprising, considering early polling on vaccine hesitancy among adults. A Crosscut/Elway Poll conducted in December 2020 found only 55% of Washingtonians intended to get the COVID vaccine. Despite that early hesitancy, the state Department of Health reports that now nearly 81% of the population 12 and older has received at least one dose of the vaccine, and nearly 75% are fully vaccinated.

Kaiser Family Foundation’s October polling shows that vaccine uptake might have slowed nationally among 12- to 17-year-olds, with 30% of parents saying their teen will not get the vaccine. Here in Washington, about 50% of children aged 12 to 15 and about 57% of teenagers 16 and 17 have been fully vaccinated. Those numbers vary by county, with county vaccination rates among teenagers ranging from 20% in Stevens County to 77% in King County. 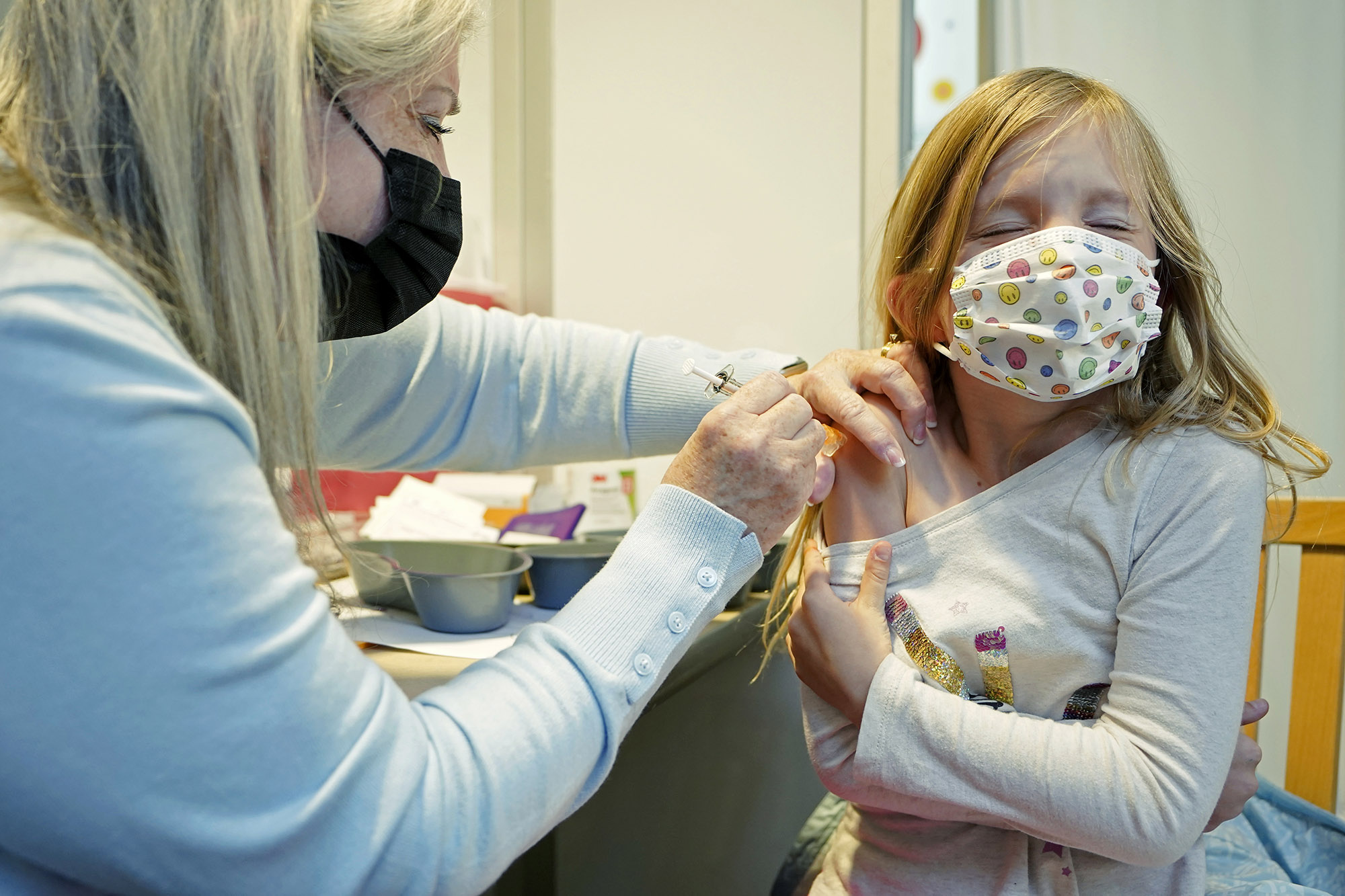 Dr. Ruth McDonald, vice president and associate chief medical officer at Seattle Children’s hospital, said doctors have addressed hesitant parents' worries that the pediatric vaccine is under emergency use authorization and whether the vaccine has been tested enough.

“But what I tell them is that almost 2,300 5- to 11-year-olds around the world have participated in clinical trials, including 60 at Seattle Children’s. We were involved in this research. The method to test the vaccine was solid. And that the data is solid that it is safe and effective at this age group,” she said.

McDonald added that while the rates of hospitalizations and serious illness from the virus have not been as high among young children as other age groups, there has been an increase of cases due to the delta variant. And while rare, serious illness in children does happen.

“As an overall population, children aren’t affected as severely but we have children who have been unvaccinated in our intensive care unit who have had very severe disease,” she said.

Also, the vaccine protects children’s family members, including younger siblings not yet eligible to get vaccinated, she said. In addition, if a vaccinated child has been exposed to COVID-19, but is not ill, right now they won’t have to stay home from school to quarantine.

“I try to emphasize the positive,” McDonald said.

Recent case numbers among children show that the pandemic is far from over in any age group.

When school returned in the fall, classrooms experienced an uptick in COVID-19 cases statewide that spiked in mid-September. According to the state Department of Health, local health departments reported 189 COVID-19 outbreaks in K-12 schools across 18 counties between Aug. 1 and Sept. 30, including 74 recorded outbreaks in Snohomish County. The median number of cases associated with each outbreak was five.

The number of reported cases of COVID-19 has been declining among school children since that mid-September peak, though the rate is not down to pre-delta variant levels. 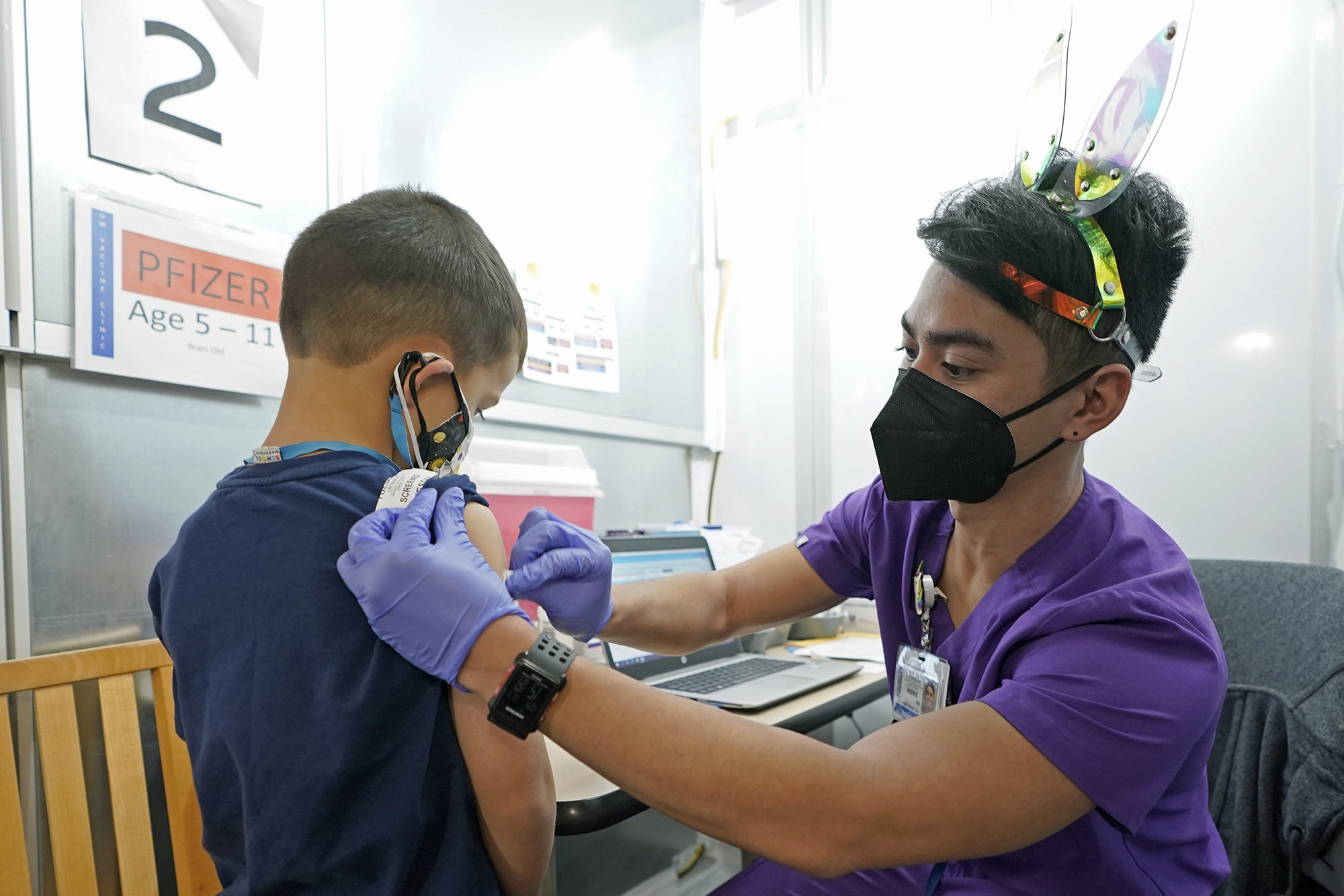 Families can find pediatric vaccines in Washington through the state’s vaccine locator. While some families have reported difficulty in getting a pediatric appointment, the vaccine locator shows several appointments around the Puget Sound area. The state Department of Health has encouraged parents to keep trying when looking for vaccine appointments.

For some families, this has meant going out of their way. Seven-year-old Yared Misgan's grandmother took him out of class to get a Pfizer shot at Aki Kurose Middle School.

The vaccination was a priority “because of his safety in the class, and I’m scared to take him to his activities,” his mother, Yenenesh, said over the phone. “I had to work, so I missed it [the vaccine clinic] at his school.”

Seattle Public Schools has hosted dozens of clinics at elementary and middle schools during the school day and on weekends to help make the pediatric vaccine available to families. Children can receive the vaccine only if they get a signed permission slip from parents.

Othello Station Pharmacy has partnered with many schools to make the vaccines available at southeast Seattle schools during the school day and on the weekends. Since the start of the pandemic, the pharmacy has vaccinated about 16,000 people, many of whom are in immigrant communities or communities of color.

“It’s another way to show Black and brown kids that there are people who look like them that can take care of them,” owner and pharmacist Ahmed Ali said.

Aki Kurose principal Caine Lowery said parents have asked the school about vaccine availability, as have the students.

“Kids have been asking questions, but mostly kids are excited to get it. They want the pandemic to be over,” Lowery said.