Here's what an analysis of citation data across three cities shows. 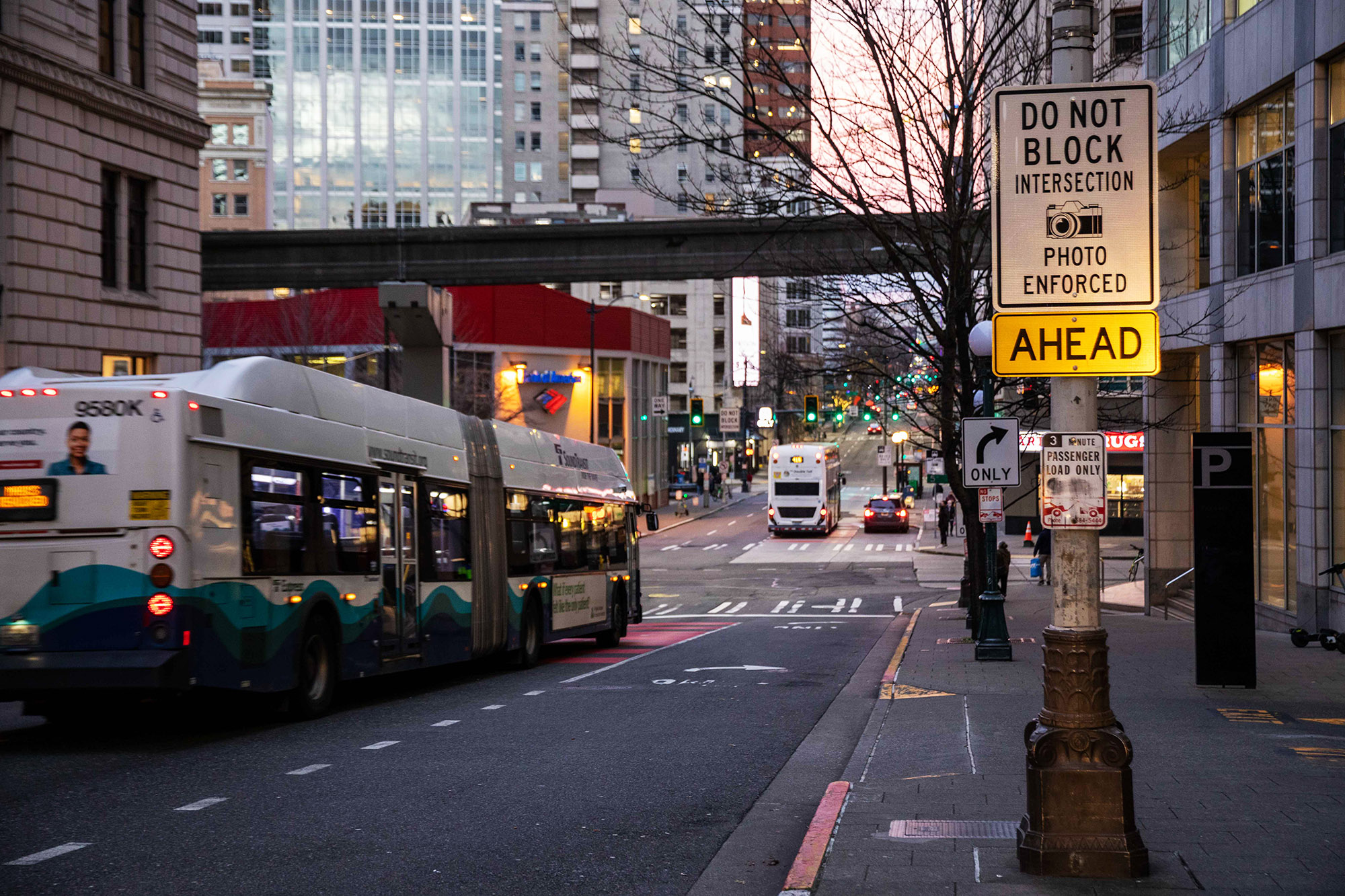 The city of Seattle is expanding its automatic traffic enforcement system, adding 11 cameras to ticket vehicles blocking intersections between light cycles and using the bus lane on downtown streets. (Lizz Giordano for Crosscut)

Seattle traffic enforcement cameras issued over 20 times more tickets than police officers in 2021. That’s a huge jump from 2019, when the cameras issued a little over three times the tickets humans did, according to Seattle Municipal Court data. This trend could continue as Seattle, like other Puget Sound cities, leans on automatic enforcement to monitor driver behavior on city streets amid staffing struggles in police departments.

The cameras are viewed by officials as a way to decrease instances of police officer bias during traffic stops while monitoring vehicles continuously. It’s also a tool many city leaders hope will improve safety amid a rise in road deaths locally and nationally. Since the state allowed the use of automatic traffic enforcement more than a decade and a half ago, nearly two dozen cities have installed the cameras at busy intersections and outside schools with the goal of modifying driver behavior.

The impact of traffic enforcement cameras on safety around Puget Sound is conflicting. National studies have found similar results. A handful of cities, including Auburn and Burien, removed the systems after councilmembers decided data didn’t show the cameras were improving safety. Many others that continue to rely on the automatic systems – and in Seattle’s case expand what traffic laws the cameras enforce – are seeing varying levels of results.

Lynnwood, one of the first cities in the state to adopt automatic enforcement, turned to the cameras to curb red light running in 2007. It wasn’t just the busiest intersection where drivers were running red lights; it was happening all over the city, according to Paul Coffelt, Lynnwood’s traffic engineer.

The goal of the cameras was to improve safety, he said, by reducing red-light running which in turn would curtail collisions.

Data from photo-enforced locations is showing a different story. Tickets and crashes both trended up between 2017 and 2021, according to city data. (Prior to 2017, Lynnwood counted collisions differently.) The city operates both red-light and speed cameras at 11 locations.

“The photo enforcement system has absolutely had an impact, a positive impact, on safety in the city of Lynnwood,” Coffelt said. “But because there’s a human factor involved, of people not willing to change their behavior or that they can’t develop the skill. And they are going to continue to receive the photo enforcement citations.”

In the early days of the cameras, Coffelt anticipated the number of citations given out each year would level out. Over the last five years, however, ticket numbers grew 15%.

“I was hoping that we would get to where we don’t have people running red lights anymore,” he said.

Some of the ticketing increase can be explained by the massive growth that has brought more people and vehicles to the region, he said, but it still doesn’t account for all of that surge. 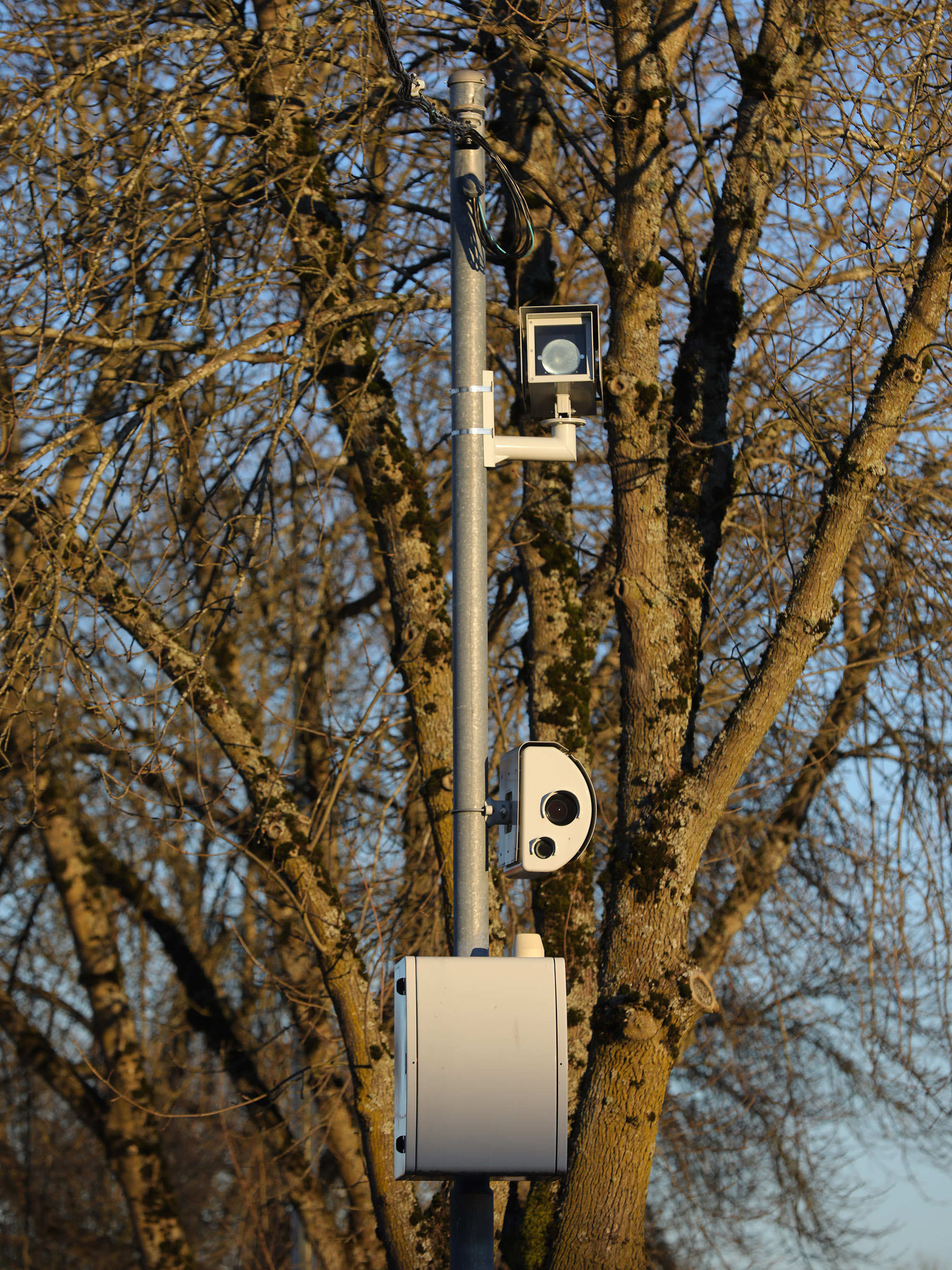 Public opinion has shifted over the traffic enforcement cameras since they were installed over a decade ago. At first, residents accused the city of using the cameras as a cash grab, Bellevue Police Department Capt. David Sanabria said.

“We don’t get those complaints any more,” said Sanabria, who was once a motorcycle cop assigned to traffic enforcement. “People are actually asking for cameras to be placed in school zones.”

Now Sanabria supervises the team that processes the tickets issued at its seven photo enforcement locations that monitor vehicles for speeding in a school zone or running red lights. According to Washington state law, an officer must review the photos before a citation is issued. Unlike tickets handed out by police officers, camera citations are processed like a parking fine and don’t leave a mark on driving records.

“These cameras can monitor thousands of cars in an hour, they are consistent and quite frankly tireless. They monitor our intersections 24/7, 365, they don't call in sick, they don’t take vacation days,” said Sanabria. “When they are activated, they capture the violation and it is our sincere hope it alters driving behavior.”

In Bellevue, the data tell a confusing picture. Before the pandemic jumbled traffic patterns and closed schools, the number of citations issued trended slightly upward between 2016 to 2019, according to city data, as collisions were declining at these photo enforced locations.

Digging deeper, it gets even more complex. While total crashes were down during this time, collisions resulting in an injury actually increased at places with the cameras.

“I don’t think you can just look at the individual stats as the total number of citations and number of collisions,” Sanabria said. “The cameras were placed in areas where they are monitoring certain things; that is rear-end collisions and right-angle collisions.”

“The cameras have been successful, even though the numbers are what they are. There's always going to be that human factor,” Sanabria said. “Especially now with the amount of driver distraction that exists.” 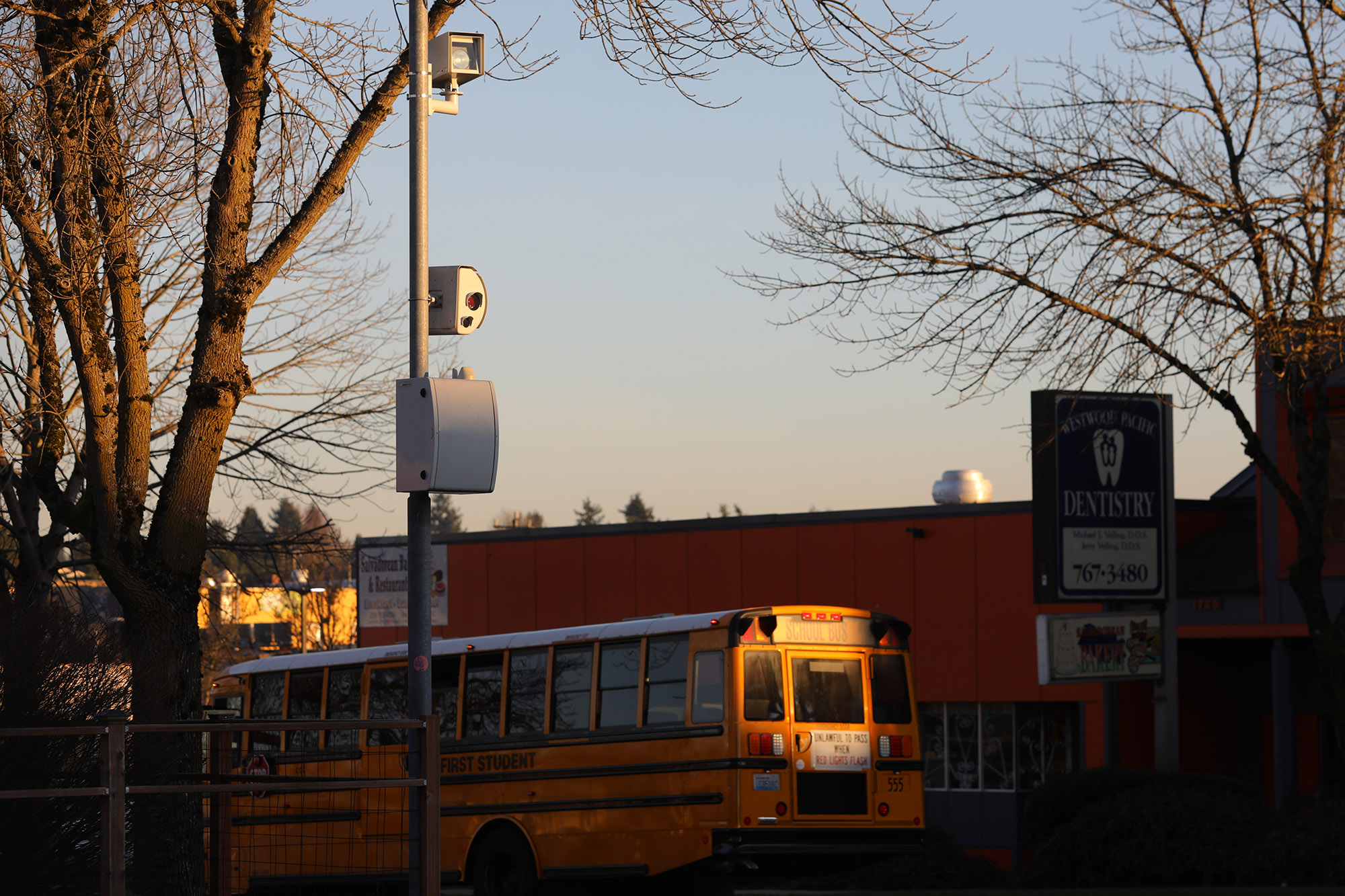 Like the data from Bellevue, studies on traffic enforcement cameras show conflicting results, especially for red-light cameras. Some show a positive impact: reducing red-light running as much as 21% and decreasing collisions by 29%. Other researchers found a change in the type of crash, often from angle to rear-end, but no evidence the cameras reduced total crashes or injuries.

Cameras in school zones seem to have more success at modifying driver behavior, according to studies, most of which found vehicle speeds dropped outside schools when comparing data before and after installation. They also tend to be the most priciest tickets issued by the cameras.

“There's a lot of research on the impact of traffic enforcement cameras and results have been conflicting,” said Yinhai Wang, a civil and environmental engineering professor at the University of Washington. “It’s a great tool, but must be used carefully, and properly.”

The cameras need to be placed in areas where there are a lot of vehicles violating traffic rules, he added.

“If these cameras truly work, people will change their driving behavior,” Wang said. “In the initial stage when the system is installed, you may see a high number of citations, but with the years [they’re] supposed to be reducing down.”

Is the future automated enforcement?

Amid COVID and struggles to fully staff the police department, Seattle relies even more on traffic enforcement cameras than just a few years ago. In 2021, officers handed out 5 percent of tickets.

Some of that increase in citations is linked to just one location Seattle added last year. Cameras now issue tickets to unauthorized vehicles using the Spokane Street Bridge which is reserved for emergency vehicles, transit riders and a few other select groups while the West Seattle Bridge is closed for repairs. Those without permission must use the First Avenue Bridge detour or risk a $75 ticket.

In recent years, fewer officers have been dedicated to traffic enforcement as focus shifted to priority and 911 calls, said Sgt. Randy Huserik, a public affairs officer with the Seattle Police Department.

The flashing signs and the pricey school zone ticket that starts at $237 seems to be a good reminder for drivers in Seattle as fewer and fewer tickets are issued outside school buildings. After all the school zone cameras came online in 2016 in Seattle, citation numbers dropped by 19% the next year. And they continue to drop, according to city data.

Benefits of the red-light system seem a bit more nebulous for Seattle. Despite both crashes and citations trending up between 2013 to 2019, Venu Nemani, a traffic engineer for Seattle Department of Transportation, argued that the cameras at red lights and in school zones were improving safety.

He also pointed to growth as one factor in the increasing number of red-light citations issued year over year. A 2017 study analyzing three years of crashes before and after the cameras were installed also showed a 40% reduction in angle collisions. This reduction could have an overall impact on injuries, as angle collisions often result in more serious crashes than rear-end ones.

Automatic enforcement is a critical safety tool, Nemani said. “Behavior modification is our primary goal; we approach it from that perspective.” 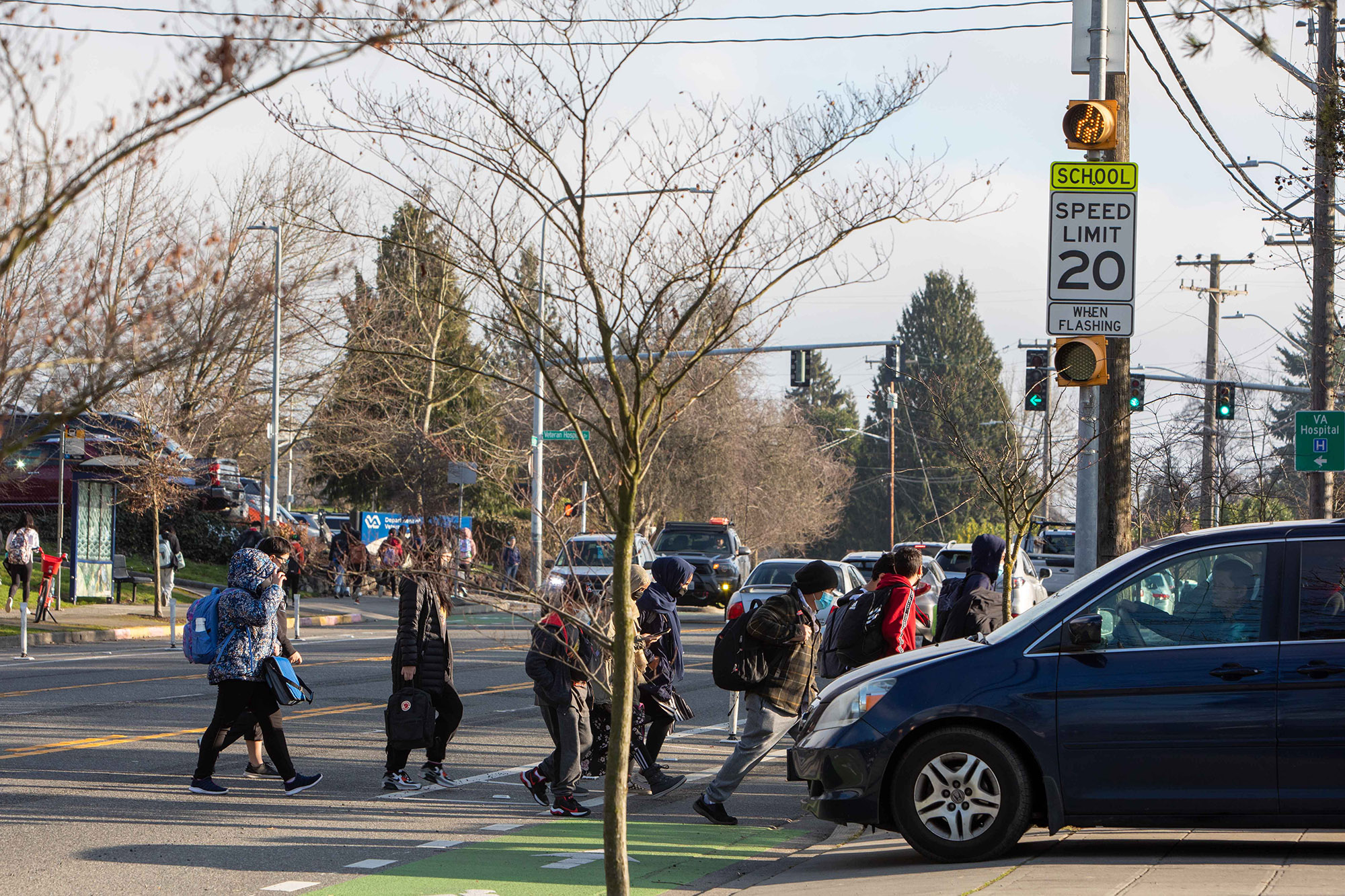 Students from Mercer International Middle stream out after school in late January. Drivers through here racked up nearly 5,000 tickets in 2021 for speeding, a large decrease from pre-pandemic, when cameras issued 9,000 in 2019, according to Seattle Municipal court. (Lizz Giordano for Crosscut)

Students from Mercer International Middle stream out after school in late January. Drivers through here racked up nearly 5,000 tickets in 2021 for speeding, a large decrease from pre-pandemic, when cameras issued 9,000 in 2019, according to Seattle Municipal court. (Lizz Giordano for Crosscut)

The city is bringing 11 more cameras online this year, which will ticket vehicles blocking intersections between light cycles, also known as blocking the box, and using the bus lane.

“Manual enforcement of those kinds of violations – police officers in cars – exacerbates congestion and safety challenges, and poses a risk of driver/officer altercations,” she said. “We see automatic enforcement as one way of removing that sort of interaction.”

Ultimately, cameras and officers should not be needed to ensure drivers follow traffic laws, the nonprofit argues, like many other advocacy groups. They want to see cities overhaul and narrow streets, so people naturally go slower.

“Design streets so enforcement is not needed,” Serebrin said. “That’s the ideal.”

A 2020 report by the state’s Cooper Jones Active Transportation Safety Council made a similar argument.

While automated traffic enforcement systems can reduce speeds, the report concluded, “Physical changes to roadways are often needed to make the reduction in vehicle speed permanent.”

After an eight-year hiatus, school zone cameras are likely coming back to Auburn. The council voted to remove red-light and speed cameras in 2014 when sparse data failed to convince a majority of the effectiveness of the automatic traffic enforcement system.

“We know there is a need to slow people down around school zones,” said Cecile Malik, a senior transportation planner with the city of Auburn.

With a new council and a new approach, the city is trying automatic enforcement again as a way to slow drivers down and make school zones safer while shifting some traffic enforcement duties away from the police department which, like many others, struggles to fill positions.

The city plans to choose locations based on both speed data, but also make sure there is a geographical balance to ensure all the cameras aren’t installed in just one area of the city, Malik said.

“We know that higher speeds lead to more serious injuries, so lower speeds will make the school zones safe,” said Malik. “We think the school zones are important locations to get driver compliance and we really hope we will see a reduction.”