How many students did WA public schools lose during the pandemic?

State education spending has decreased by $900M as enrollment dropped during the pandemic. 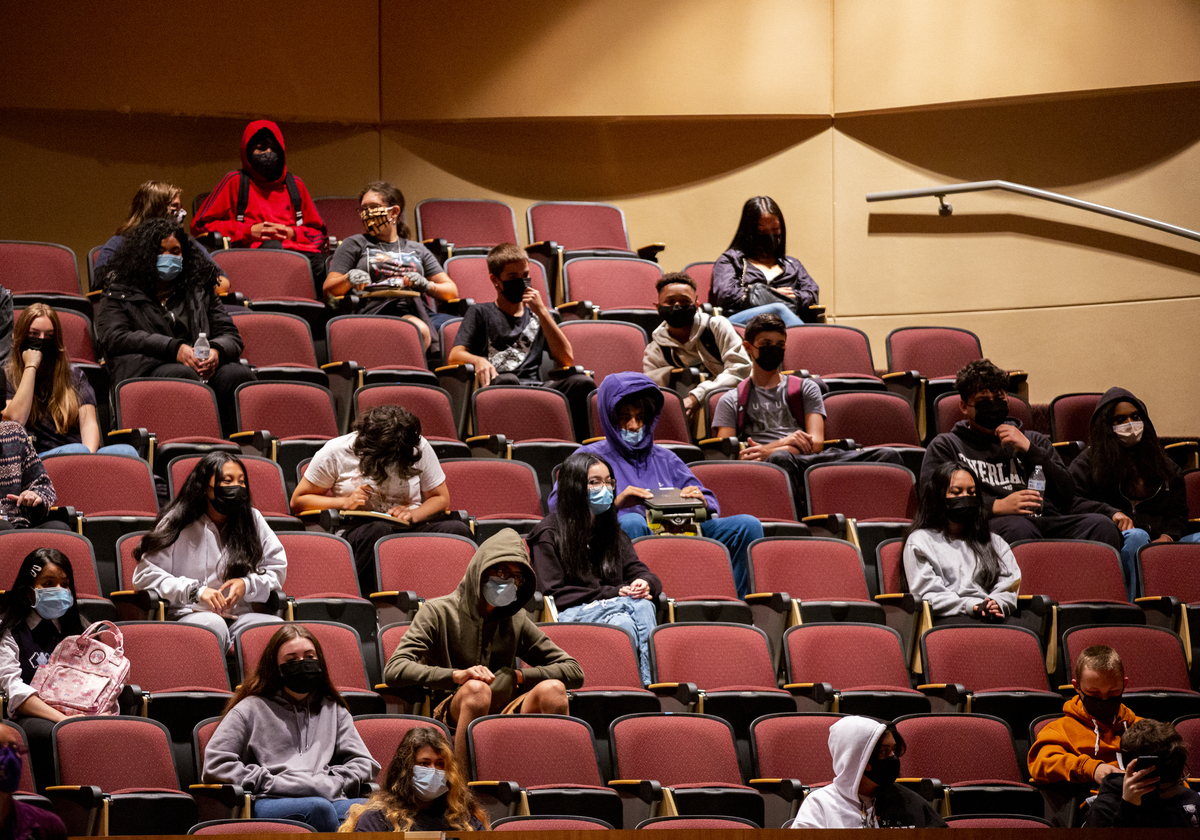 Students sit mostly socially distanced in auditorium seats on Day 2 of a two-day Jumpstart orientation program for incoming 9th graders at Mount Tahoma High School in Tacoma in this Aug. 26, 2021, file photo. About 120 students participated in the program, which is meant to help ease the transition to high school. (Lindsey Wasson for Crosscut)

Back in 2020, in the early days of the pandemic, as Washington state students started learning remotely, Jen Garrison Stuber’s email blew up. Garrison Stuber is the advocacy chair of the Washington Homeschool Organization.

While many were from parents worried about their school’s sudden shift out of the classroom and into remote learning, plenty of other parents were weighing the option to make the jump to officially home-schooling.

In October 2020, about seven months after Washington schools first started remote learning in response to the COVID-19 pandemic, statewide public school enrollment had lost about 40,000 students, or about 4% of the more than a million children enrolled during the previous school year, according to state data from the Office of Financial Management. 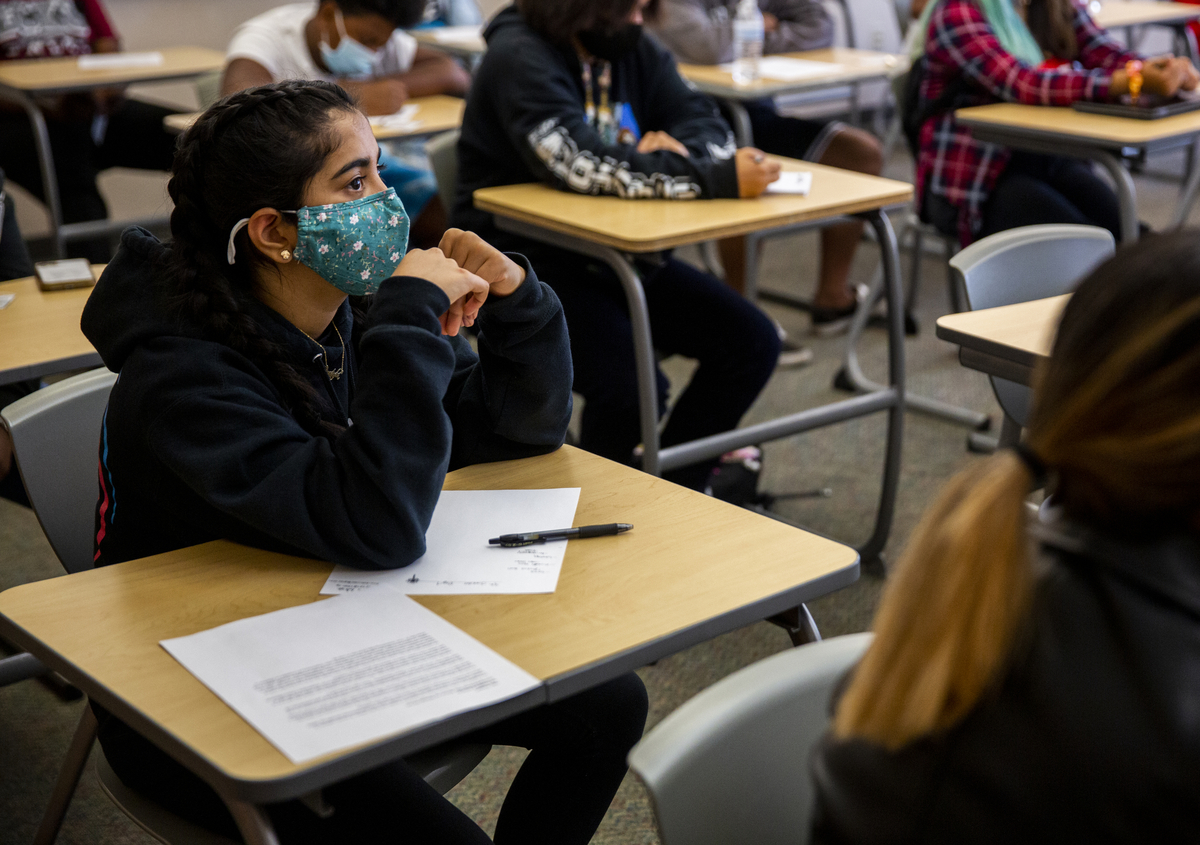 Anastasha Kathireson listens to Dean of Students Rosalia Burson lead their team in an exercise on Day 1 of a two-day Jumpstart orientation program for incoming 9th graders at Mount Tahoma High School in this Aug. 25, 2021, file photo. (Lindsey Wasson for Crosscut)

Anastasha Kathireson listens to Dean of Students Rosalia Burson lead their team in an exercise on Day 1 of a two-day Jumpstart orientation program for incoming 9th graders at Mount Tahoma High School in this Aug. 25, 2021, file photo. (Lindsey Wasson for Crosscut)

The office that tracks all things related to the state budget also reported that a year later, in October 2021, after school districts statewide were mandated to return to in-person instruction, public school enrollment statewide hasn’t rebounded.

These past two years buck a 20-year trend of slow but steady growth in the number of children in Washington public schools, growth that hovered about 1% a year, with two years of declines in that time period.

So where did those students go?

“We get this question a lot,” said Katy Payne, spokesperson for the Office of Superintendent of Public Instruction. She said the agency has been examining where students have gone throughout the pandemic and expects to have more definitive information later this year.

No one knows the full answer to that question yet, but there are a lot of hints.

One major hint: State headcounts of home-school and private schools show that two years after schools went remote, some children have remained in the alternatives their parents chose early in the pandemic.

To be clear, there are still many more students — nearly 1.07 million, not including pre-K —  in public schools than there are in private schools or in home-based learning. But in 2019, there were 1.12 million enrolled in K-12.

The lower enrollment in public schools over the past two years means that about $900 million in the state’s original budget for schools was not spent, mostly because the funds are distributed to districts according to student enrollment. This year, Gov. Jay Inslee’s 2022 supplemental budget proposes reinvesting some of that unspent but budgeted money into nurses and school counselors.

“We certainly don't think it's going to be a prolonged enrollment decline,” said T.J. Kelly, OSPI chief financial officer. “But the question of how fast do we get back to those 2019-20 school year levels? You know, we can’t definitively say whether we think it's next year or two years or three years, but we don't think it will be at this level forever.”

The fall headcounts alone don’t offer the complete picture. For instance, headcounts wouldn’t necessarily show if an individual family shifted from private school to home-based schooling, if a family moved to a different state, if a student dropped out of the educational system altogether, or if parents didn’t know they had to fill out a state form to register their children for home-schooling. And they don’t necessarily show how families will choose to educate their children in the long term.

But so far, the headcounts suggest that during the past two school years, a significant number of families looked toward private and home-based options to get their children through the pandemic.

In October 2020, the number of home-schooled students in Washington state nearly doubled to about 39,000 students. This year, many of them remained in home-school.

“I’ve been surprised and delighted by how many stayed,” said Garrison Stuber of the Washington Homeschool Organization, a nonprofit that helps parents and home-school advocates with the ins and outs of home-based learning and keeps abreast of legislative issues.

Home-based learning also opened up as an option for parents who, perhaps for the first time, were mainly working from home, she said.

Garrison Stuber said many parents made the switch after learning about the resources available to help them meet the requirements and responsibilities of a home-based education, which includes, among other requirements, some parent qualifications, annual assessments and record-keeping, and teaching 11 core subjects.

For many parents, shifting to home-based learning was a stopgap measure to provide educational consistency for their children throughout the year, she said.

As this year started, many parents had continued concerns about whether schools would be able to remain in-person or shift back and forth to remote learning. That has played out, with many schools temporarily shifting back to remote learning because of COVID-19 outbreaks among students or teachers.

Garrison Stuber expects more home-schooled students may return to public schools next year. Even for some parents who might have preferred home-based learning, it doesn’t fit everyone’s long-term situation, such as parents who have to return to a workplace or office, she said.

The Washington Federation of Independent Schools, an advocacy group for private schools, estimated that the increase in private school enrollment statewide is closer to 10,000 students, said Suzie Hanson, the group’s executive director.

Hanson said an increase in enrollment across the board also doesn’t tell the whole picture of how the pandemic affected private schools.

Despite the increases in overall enrollment, many private school families had to leave their schools because they couldn’t afford tuition after a job loss or another financial barrier during the economic crunch in the first outbreak of the pandemic.

“Many private schools did try to help those parents,” but it wasn’t always feasible, Hanson said, adding that her organization is also curious about Washington's enrollment shift during the pandemic.

“Everyone is wondering where all the public school students went,” Hanson said.