The city council member said she expects the uphill climb to continue on policies like taxing corporations for housing revenue. 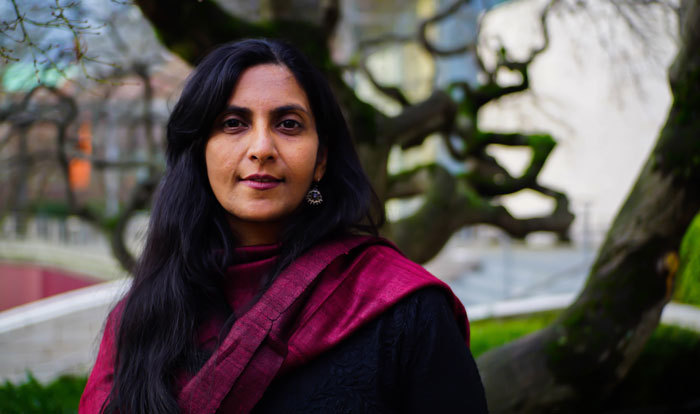 Kshama Sawant has been a member of the Seattle City Council since 2014. She spoke with managing editor Mark Baumgarten this week in Crosscut’s Northwest Newsmakers series. (Courtesy of Kshama Sawant)

Two months after some of her own constituents tried to throw her out of office, Seattle City Councilmember Kshama Sawant is feeling more empowered than ever to fight for her sometimes divisive agenda in City Hall.

That was among the many points Sawant made during Crosscut’s Northwest Newsmakers event on Wednesday, in which she discussed December’s recall election and her policy proposals for the coming year.

Sawant, the city’s longest-standing council member and its only socialist, credits her base of working-class supporters for keeping her in office, despite strong opposition from business groups. She said those supporters expect her to continue pushing for policies supporting affordable housing and pandemic hazard pay for hourly workers.

Most political observers saw Seattle’s general election results in November and the way Sawant narrowly avoided a recall as a signal that voters are seeking moderation from the progressive policies the Seattle City Council had adopted in recent years. Sawant said that wasn’t her takeaway.

“[It’s] the idea that ordinary people can get organized, fight back and win,” she said.

Sawant was first elected in 2013, mainly on her push for a $15-an-hour minimum wage. Since then, she has been reelected twice, despite massive efforts by business groups in support of her opponents. Now she credits her supporters for the narrow defeat of the recall effort, which she considered a right-wing and racial attack on progressive policies. During the interview, she said some of her constituents who voted in favor of the recall were duped by misleading information from the recall campaign.

She also said she and her supporters were emboldened by the recall victory, but warned Seattle’s progressives to not be complacent because there will be continued resistance, even on the council, to policies that she believes will preserve their rights.

Officially, Seattle City Council seats are nonpartisan, but Sawant noted that voters did elect more conservative city leaders and pointed to the “dangerous gains” right-wing leaders have made across the U.S. since she took office. Seattle voters continued to elect Democrats as mayor and for the city council, although they did pick a woman who previously ran for office as a Republican as their new city attorney.

“It won’t be by far the last attack by big business and the right wing against our office,” said Sawant, who did not directly answer questions about whether she planned to run for another term on the Seattle City Council. Her current term ends next year, but she said running again depended on the pressing needs of the working class.

“If [running for reelection] is the best way we can serve the needs of working people, absolutely we would do that,” said the former computer scientist and economist, who also would not say if she was interested in a higher statewide or federal office.

Political opponents — including those who pushed to recall her — said Sawant has been a polarizing figure and has broken the law in pushing for various policies. That included using city funds to campaign for a ballot measure in early 2020 to tax Amazon and other large corporations, as well as opening Seattle City Hall during protests in the summer of 2020.

Sawant said she is not against politicians being held accountable through a recall process, but questioned why the Washington Supreme Court allowed the Recall Sawant campaign to continue while dismissing others, such as one against Mayor Jenny Durkan in 2020 and one against Thurston County Sheriff John Snaza over his refusal to enforce mask mandates.

During the interview with Crosscut managing editor Mark Baumgarten, Sawant did not stray from her central message, repeatedly stating that she would “unapologetically” fight for working people, even if that meant clashing with other city council members or her political opponents.

She said that too much stress is put on the council members getting along rather than creating policies that benefit all Seattle residents.

Sawant did not hesitate to criticize recently elected Mayor Bruce Harrell, whom she previously served with on the council. She believes he succeeded by pushing a “pro-corporate agenda.” She said she has not sat down to talk to the new mayor yet, but their offices were trying to set up a meeting.

Sawant said Harrell’s recent policy choices, including the decision to end the city’s eviction moratorium and increase resources for policing, run counter to the pressing needs of most Seattle residents.

“At the end of the day, what matters are actual outcomes for working people,” she said.

She is now pushing for policies she believes will help solve Seattle’s homelessness problem, introducing legislation on rent control, reinstating the eviction moratorium and increasing affordable housing through funds from a corporate tax on businesses such as Amazon.

She said nine out of 10 people who are evicted end up homeless, a statistic from a 2018 report by the Seattle Women’s Commission that she has repeated often in pushing for an extension of eviction moratoriums. Sawant also said many working-class families who are served eviction notices often don’t know how to fight them in court.

She also voiced concern about Harrell’s push to increase resources for public safety and policing efforts, including a plan to hire up to 125 more Seattle Police officers this year. Sawant thinks increased spending does not address the underlying cause of crime — inequality. Creating a safer city means addressing inequality issues, such as the lack of affordable housing options, she said. The people most vulnerable to crime, she said, aren’t wealthy people, but working-class residents and small business owners.

And to address those issues, Sawant urged her working class supporters to support her proposed policies.

“If we don’t have a mass uprising of ordinary people, we’re not going to win any of those things,” she said.