In the wake of shootings and break-ins, community members hope an investment in arts brings back foot traffic to improve safety. 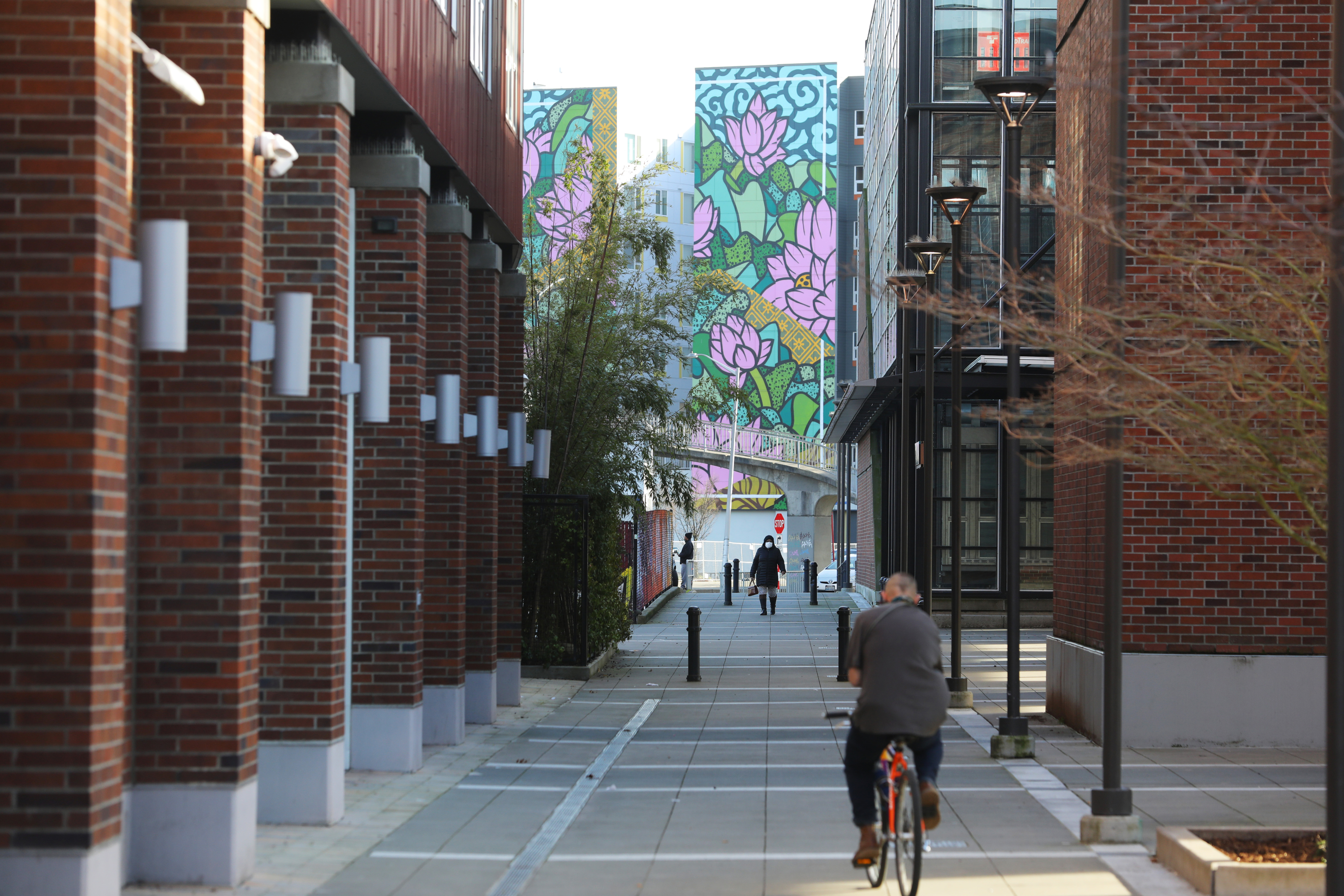 Pedestrians and cyclists move through a walk way between the Artspace Mt. Baker Lofts, at left, and the Mt. Baker light rail station, at right, Feb. 11, 2022. (Genna Martin/Crosscut)

For the residents of the Artspace Mount Baker Lofts, the problems started almost immediately after the pandemic shut the world down in March 2020. The apartment building sits right next to the Mount Baker light rail station. The huge drop in transit ridership and shuttered businesses nearby left the station plaza and surrounding area without its usual steady stream of foot traffic.

Residents complained about an uptick of break-ins in their buildings and cars, drug use and gunfire nearby. Then they decided to take action.

Rather than simply increasing the police presence around the station, Artspace residents want to give people a reason to return to the Mount Baker station area and provide the sort of human presence and eyes on the street that can help tamp down crime and harassment and other problems.

Their vision includes more art, music and programming in the station itself and finding temporary uses for nearby vacant buildings.

“As a BIPOC community, we don’t necessarily want to be heavily policed or have heavy security around us because of what that historically means,” said Jamil Suleman, an Artspace Lofts resident who helped lead the organizing effort. “Our goal is to actually transform this area, which is now desolate. We want to reverse that trend and make the Mount Baker light rail station a multicultural BIPOC arts hub. The goal is to make this the most exciting light rail stop in the city.”

In summer 2021, a man was shot and killed just outside Hoa Mai Preschool, which operates on the ground floor of the Artspace building. Last fall, another man died after a shooting near the station.

Residents say the desolation was compounded by vacant city-owned properties that sit on the opposite side of the station from the Artspace Lofts. Eventually, the former University of Washington laundry facility, the Kings Hall event space and a parking lot will be razed and rebuilt as affordable housing, a child care center and an early learning research facility. But it will be at least two years until a developer breaks ground, leaving the properties largely unused. The Rite Aid a block up from the Artspace building and the Starbucks across the street also permanently closed during the pandemic. A view of Kings Hall from the Mt. Baker light rail station, Feb. 11, 2022. A kiosk for Curative Covid-19 testing is stationed in the parking lot. (Genna Martin/Crosscut)

A view of Kings Hall from the Mt. Baker light rail station, Feb. 11, 2022. A kiosk for Curative Covid-19 testing is stationed in the parking lot. (Genna Martin/Crosscut)

The Mount Baker station tracks are elevated, which creates a dark tunnel and empty plaza space underneath. The residents want to make the space more inviting with more music and visual arts — after all, Artspace Lofts provides subsidized housing and workspace for Seattle artists. There’s also talk of getting food trucks to set up shop and launching a farmers market on site.

One visual arts idea is to use a projector to show art on the walls in the tunnel — art produced by residents of Artspace and students from Franklin High School, located across the street from the station.

“We want to be able to continuously create new stuff and share it, instead of it just being static,” said Flora Tempel, executive director of the Mount Baker Hub Alliance, a local business association that has been helping with the effort. “There’s a tradeoff with public art. We invest all this money, but at some point when it’s in your neighborhood you get used to it. My hope is that if we have a projector it gives people more incentive to frequent the space to see what’s new.”

The residents are also hoping to make busking a regular feature of the station. Live entertainment for tips is allowed in a specified area already, but Tempel said it’s tucked out of the way and that she can’t remember ever seeing a busker perform at the station. So Hub Alliance is trying to get the word out to residents and Franklin High School students to start performing.

Longer term, the group hopes to get grant funding to support weekly arts events in the station. Tempel said she wants to pay artists from Artspace or the broader Seattle arts communities to host workshops and lessons.

In an email, a Sound Transit spokesperson said the agency is working with the group on permitting and approvals, and has lighting and arts approvals underway. Spokesperson John Gallagher also wrote, “More generally, we understand the concerns of area residents, which is why Sound Transit is committed to continuing to work in partnership with the community, city and county agencies surrounding issues at the Mount Baker station.” 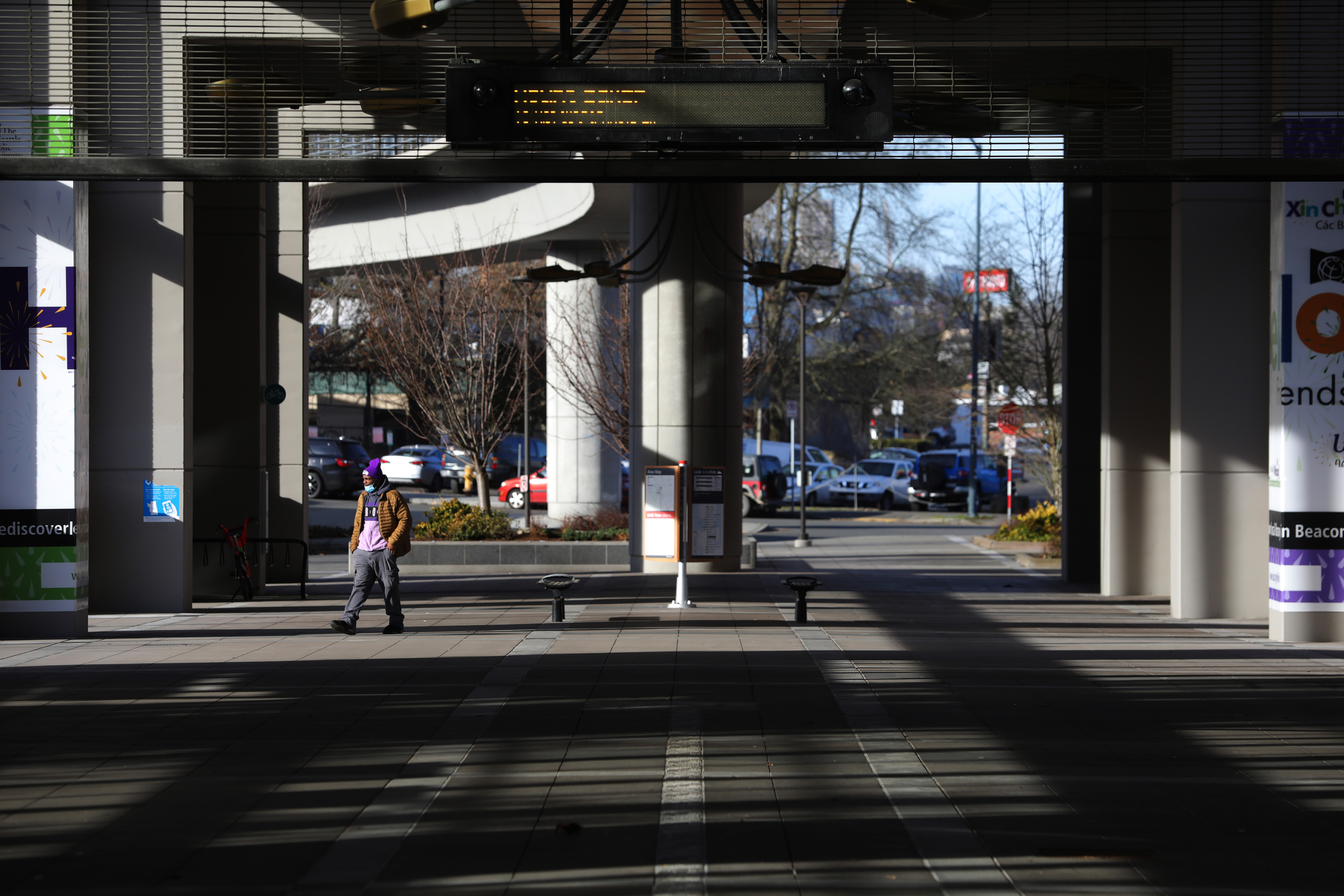 A figure walks through the tunnel under the tracks at the Mt. Baker light rail station, Feb. 11, 2022. (Genna Martin/Crosscut)

A figure walks through the tunnel under the tracks at the Mt. Baker light rail station, Feb. 11, 2022. (Genna Martin/Crosscut)

At the city-owned properties, some small changes are already in motion. There is a COVID-testing site using the city property. The city is going to reopen the parking lot, providing parking spaces for Artspace residents and paid public parking. The city uses the former UW laundry facility for storage and is not considering using it as part of this community effort.

Despite being a former events space, the now-empty Kings Hall could prove more challenging to put to use. Seattle City Councilmember Tammy Morales — who represents Mount Baker and has been meeting with the Artspace residents for a year and a half — envisions using Kings Hall as a workspace and business incubator for people in creative industries, such as arts and music production and graphic design.

But Kings Hall has fallen into disrepair over the years. Tempel said there have been problems with trespassers during the pandemic. The Seattle Department of Finance and Administrative Services and the Office of Housing are working to determine what it would cost to bring the building up to code so that it could be used temporarily.

Ultimately the choice to allow something like that to happen lies with Mayor Bruce Harrell. Asked for comment about the Mount Baker effort, Harrell’s office provided a statement. “The mayor’s office looks forward to listening to and engaging with community on the future of the Kings Hall site, working toward an outcome that meets local needs and supports a thriving Mount Baker for all residents.”

Suleman said he’s feeling optimistic that the effort has finally gotten some buy-in from the politicians and government agencies needed to make change happen. He and his fellow residents were able to get Councilmember Morales and King County Councilmember Girmay Zahilay on board early in their campaign. The elected officials in turn brought Sound Transit, the city agencies and the mayor’s office to the table, all of which have been meeting bimonthly with Artspace residents and the Hub Alliance.

Still, Suleman is frustrated that things had to get so bad before the residents’ ideas gained traction.

“Unfortunately we as a community had to go through a lot of trauma, including multiple homicides directly outside of the apartment building, shootings across the street, fires in the nearby homeless encampment that killed two people,” said Suleman. “It took four deaths for people to really mount up and rally together and get organized. But we are now at a point where we can say we’re out of that really dark place.”

Correction: A previous version of this story referred to a Bartell's drug store in the Artspace Building closing during the pandemic. It was a Rite Aid up the block from the building.